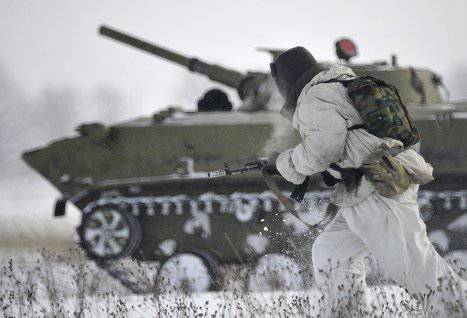 The situation in Syria and possible scenarios of its development continue to attract the main attention of the military and politicians around the world. There is a feeling in the air that the civil war in this country can act as a detonator for the start of much more serious geopolitical processes throughout the world.


Russia, albeit belatedly, has finally decided on its own national interests in this region: the seizure of power in Syria by Islamic radical groups will inevitably lead to an increase in tension in the Russian North Caucasus, especially since there is irrefutable evidence of the participation of members of the terrorist gangs from this difficult region of Russia in the civil war in Syria on the side of foreign fighters.

Eloquent cadres of visiting Damascus suburb by members of the Russian Izborsk club in March 2013 leave no doubt that the threats left by volunteers from the republics of the North Caucasus on the walls of houses in Darayya to the Russian leadership are the main motive of their participation in Syrian events. Even at the “cannon fodder” level of the Syrian opposition, there is an awareness that Russia is likely to become the next target for Islamic radicals from the entire Middle East.

A superficial study of the geographical and political-administrative maps of Russia is enough to come to the conclusion that the main threat to the integrity of Russia comes from the North Caucasus.

This is well understood by our enemies. Modern war is a very expensive occupation, without serious ideological, financial and logistical support, all the terrorist organizations of the North Caucasus would not have existed for several months. But, as they say, "once the stars are lit in the sky, it means someone needs it." And the "stars" and their "sponsors" have long been known.

Unfortunately, the overall social, economic and inter-ethnic situation in this region leaves much to be desired: the ongoing special operations to eliminate the bandit group in Dagestan; the unstable situation in Kabardino-Balkaria; the imminent conflict between the Chechen Republic and the Republic of Ingushetia, which with a high degree of probability can result in the departure of one of the leaders of these subjects of the Russian Federation with the subsequent redistribution of power and spheres of influence, and, as a result, the inevitable resumption of the Ossetian-Ingush conflict, which due to religious factors make a wonderful backdrop for the participation of Islamic militants from around the world.

Behind all such processes there are always serious financial structures or oligarchic circles. It is not necessary to wait for the start of large-scale armed provocations in order to understand where the next attempt will be made to destabilize the domestic political situation in Russia. It is enough to analyze the actions of large business, which is always, if not strange, in the course of upcoming events. Remember at least Shamil Basayev’s raid on 1999 to Dagestan. Many could have already forgotten, but the late Boris Berezovsky signed his own “sentence” by directly participating in the financing and coordination of this terrorist attack. His telephone conversations with leaders of gangster formations for a long time did not leave the front pages of Russian newspapers. This is a small touch to the question of the cost of modern war, because the Chechen, and in fact international, detachments of mercenaries invaded Dagestan from the territory of then quasi-independent Ichkeria. Even in such conditions, war requires serious financial support.

By the way, recently at the household level rumors about the planned transfer of some highly profitable industries outside of North Ossetia are actively circulating. This fact involuntarily raises concerns that it is likely that big business considers it too risky to keep its assets in this politically unstable region. Isn’t the process, about which in Moscow, as it has happened more than once, launched last?

Indeed, despite the “reforms” that the Russian armed forces underwent from 2007 to 2012, the armed forces still retain sufficient potential to repel external aggression, largely due to the residual potential of the nuclear deterrent forces.

But internal threats to modern Russia today look much more dangerous and real. This is facilitated by the growing tension in the issue of interethnic relations, the completed formation of mono-national ruling elites in the Russian subjects of the North Caucasus, as well as the readiness of our new “friends” from the EU and from across the ocean to make the most of these factors to prevent the strengthening of Russia’s position as on the Eurasian continent and in the international arena.

The "test stones" are already known - the "partisans" of the Far East, raising the topic of the expediency of leaving some of its subjects from the Russian Federation, who felt too independent and self-sufficient.

The logical continuation of this reasoning may be the information about the beginning of the centralized training of “our friends” militants for combat operations already in Russia.

Islam is an important factor in the intra Syrian crisis. The fighters with Assad, formally, are fighting to build on the land of modern Syria not a secular or fairer state. They want to give the Syrians the happiness of living according to the laws of Sharia. And all this motley public after any scenario of the completion of the events in Syria will not spontaneously cease to exist, but it is of little use for the war against Iran.

It is not difficult to guess in which direction, most likely, all this destructive potential will be directed. Therefore, Russia, apparently, in the near future will try to load with internal problems and some of the militants fighting in Syria today may well be redirected to the Caucasus region.

No one is able to accurately identify the number of members of the bandit underground of the North Caucasus who have passed through Syria over the past few years, but, judging by everything, there were a lot of them. But in this situation, it is not their number that is important, but the likelihood of them inviting “former comrades in arms»To take part in the liberation of their brothers in faith from the" Russian yoke ". The flow of volunteers for this “task” can be critically dangerous.

And the problems of the Syrians are very similar to what we can face. By the way, Russia has already attacked these “rakes” more than once.

The Syrian army has been preparing for war with Israel for decades. Fighting extremist gangs using guerrilla tactics for army units is not an ordinary task. The Syrian military spent more than one and a half years to work out effective countermeasures, because with the almost complete lack of experience in dealing with the enemy on their territory, they encountered an experienced and trained opponent, including from our country.

The fighters from the Russian North Caucasus, apparently, appeared in Syria already in 2010, and the Syrians had to face an experienced and cunning adversary, who had accumulated much experience in sabotage and partisan warfare from 1994.

Experience is often more important than numerical superiority or fire superiority. In June 1941, the German Blitzkrieg against the USSR was largely due to the much greater combat experience of the invading enemy. The same factor, but in the 1945 year, allowed the Soviet army in a matter of weeks to sweep away the formidable Kwantung Army.

The revitalization of Russia's position on the Syrian crisis can not but rejoice. Blocking the “military initiatives” of the pro-American coalition, the decision to revive the Mediterranean squadron, the permanent Russian military presence in this region, the ongoing military-technical cooperation between our countries undoubtedly impede the consolidated efforts of external forces to defeat the Syrian state and help curb the escalation of the situation in southern Russia .

But events may occur, as often happens in Russia, faster than we expect.

Is the Russian army ready for the Syrian variant in the Caucasus? After all, the escalation of tension can occur simultaneously in more than one subject and with external intervention there will be no simple options. Two Caucasian military campaigns remained only in the memory of the direct participants of the events. The experience of the Russian army is in no way reflected in the new combat regulations and firing courses. It would be logical, if only for parts and compounds that are in a conditional risk zone, to make an exception. Yes, unlike Syria, there are internal troops in the system of the Ministry of Internal Affairs of Russia. But as previous experience shows, without close interaction with MO units and compounds, the effectiveness of their use is insufficient for self-localization of internal conflicts.

No less important are the legal foundations for attracting troops to combat operations on their territory, in terms of the responsibility and rights of commanders for the use of personnel entrusted to them, small arms and heavy weapons.

The secret of success was invented a long time ago: the weak are always beaten, and the higher the readiness of the Russian military organization to such scenarios, the less likely it is to attempt to implement them.

Ctrl Enter
Noticed a mistake Highlight text and press. Ctrl + Enter
We are
What you didn't want to know about EnglandOn the other side of the "red" and "white." Report Izborsk club
129 comments
Information
Dear reader, to leave comments on the publication, you must to register.