Inhumans on the march of "democracy" 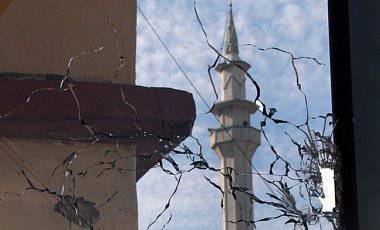 In Syria, the war continues between life and death. It is time for flowering when the trees put on a new outfit, and the spring warmth warms both exotic flowers and ordinary yellow dandelions, reminiscent of a distant Motherland ... Every blade of grass wants to live, every flower looks at the blue-blue southern sky ... And, walking through the flourishing city I don’t want to think about anything disturbing and sad - but it hasn’t gone anywhere, it stands, lurking around the corner ... And, probably, it’s more offensive to die in the spring, when everyone wants to live in peace, be warm in the sun and hope for the best ...


Syria did not have time to say goodbye to the students who were killed as a result of a terrorist mortar shelling of the dining room of the faculty of architecture - how shocking came news from Aleppo, showing the barbarism of the "opposition" militants.

The terrorists committed atrocities in the Kurdish quarter of Sheikh Masoud. Bursting into the mosque Hassan, killed everyone who was there. A preacher of moderate Islam, Hassan Safi-Ed-Din, was executed with medieval cruelty: he was beheaded and placed on the minaret of the mosque, and the body dragged through the streets of the quarter and put on public display.

This is the second monstrous murder of a priest in the last month. Let me remind you: in Damascus 21 March, a mosque was blown up, in which the famous theologian Muhammad Saeed Ramadan al-Buti was preaching. Then, along with him, more than 40 people died, including his grandson and many young people.

Crimes continue. 31 March A mined car was blown up in the Mezzeh metropolitan area near the Al Akram mosque. One person died as a result of the attack.

In the province of Homs in the city of Tel Kalyah, terrorists killed 10 civilians - mostly women and children. At the call of civilians, the army intervened, eliminating the criminals.

And in the province of Deir Ez-Zor, bandits staged a major sabotage of oil wells, causing enormous damage to the country's economy. They burned 9 wells, and three of them were particularly hard hit. According to the Ministry of Oil and Mineral Resources of the SAR, the damage is 4670 barrels of oil.

Diversions, terrorist attacks, barbaric murders, medieval executions ... I do not want to report this, especially against the backdrop of such a wonderful, flourishing spring. But we have to. It is necessary that people know to whom the West and the monarchies of the Persian Gulf supply weaponWhich side is supported by the “champions of democracy” - the United States, which stands behind the beautiful words about “revolution”, “struggle for freedom”, and “human rights”.

The United States and NATO are trying in every way to cover up their puppets and protect them from any accusations. But their atrocities speak for themselves.

I remember how long the United States shouted that the use of chemical weapons is unacceptable from any side, and that this is a “red line” for the United States. When the militants used a chemical warhead missile against civilians in the Khan Al-Asal district of Aleppo Province (this happened on March 19), even this did not force the West to once and for all abandon the support of the gangsters. On the contrary, Western politicians are trying to whitewash the villains. So, NATO Deputy Secretary General Alexander Vershbow said the other day that the North Atlantic alliance still has no evidence that the Syrian "opposition" used chemical weapons and even that the militants have any.

It should be noted that the militants themselves tried to blame the government of Syria for the use of chemical weapons. But, if there were any evidence of this, NATO would have a completely different rhetoric. The number of victims would have been overestimated several times, and the world media would have said something completely different, calling for an immediate invasion to begin. If the official representatives of NATO deny the use of chemical weapons, but there are real dead and affected by such weapons - it turns out, everything is clear about who used it.

How, then, in the West for two years still manages to maintain the image of militants and thugs as “freedom fighters”? It is harder and harder to do this, against the background of the crimes of the rebels, who are in no way inferior to the crimes of the fascists. We have to resort to outright lies.
Recently, a former correspondent for the American television station CNN, Amber Lyon, said that journalists are being forced to openly lie, in particular, about events in the Middle East. Information is reviewed and forced to broadcast fraudulent pseudo-news. True, no one needs. The journalist herself has been shooting a popular uprising in Bahrain for a long time, but her reports (taking pictures of which she risked her life and even spent some time in a Bahraini prison) turned out to be unclaimed because the overthrow of the leadership of this country is unprofitable for the United States. But the United States is seeking to crack down on the recalcitrant leadership of Syria - and therefore sentimental reports about the "people's suffering from the regime" are accepted by the leadership of CNN favorably. Fees are not paid to journalists for their work, but depending on the content of the report - if the material is acceptable, the fee will be paid, if it departs from a certain line - there is no question of any payment for labor, moreover, such material will not be allowed to the airwaves.

Al-Jazeera, Qatar, which plays an important role in justifying the NATO bombings of Libya and is now trying to play the same role in Syria, is not far behind the Western and American, allegedly "free" media. But many representatives of the Arab nation no longer trust the television channel contained on the petrodollars of the monarchical regime of Qatar. Recently, the Palestinians held a demonstration in honor of the Day of the Earth in the city of Sakhnin, and the film crew of the Al-Jazeera TV channel came to the event. The Palestinians expelled this group, precisely because Al-Jazeera biasedly covered events in Syria. They chanted: "Al-Jazeera," away! "And" Syria is a free land. " This is not the first time that the Arab people is protesting against the information policy of the Qatari TV channel. When a mass demonstration was held in Tunisia on the occasion of the murder of opposition politician Shukri Balaid (whom they punished for opposing the Muslim Brotherhood and, in particular, exposed the existence of camps for training extremists in Tunisia, which were then sent to Syria) - Al-Jazeera employees came to shoot a demonstration, but were repulsed by its participants, who chanted: "No to America, no to Qatar."

And the Christians of spring Syria celebrate Easter. The priests pray to God for peace in the country and call upon the people for solidarity in the face of all difficulties. People believe in the best - that this country, with its ancient traditions, will survive and win.

Ctrl Enter
Noticed a mistake Highlight text and press. Ctrl + Enter
We are
Results of the week. “Yellow pants! Two times “ku”! ”"Black Islam": the US social and racial split is exacerbated by religious
55 comments
Information
Dear reader, to leave comments on the publication, you must to register.