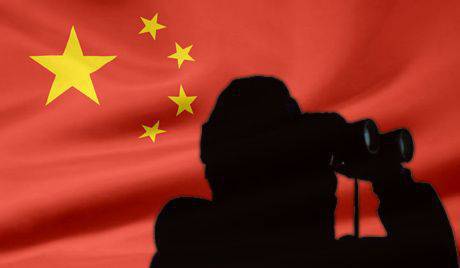 US intelligence "overlooked" the theft of military technology by a citizen of the PRC. The FBI sprinkles ashes on its head, but the deed is done - military information has been closed in the US for two years now as it is completely open in China

The 49-year-old Chinese man worked for an American company, a leading Pentagon contractor. The engineer had access to research in space and navigation. Back in 2009, he left for historical homeland to give a course of lectures. And at the same time, he took with him to China thousands of secret files with descriptions and data of a device that allows drones to hit targets without communication with the satellite.

He conducted presentations at universities in the People's Republic of China and at conferences organized by the government, where he spoke in detail about American unmanned technology.

Apparently, the residents of American intelligence also participated in the same specialized conferences. For no one except them could convey to Washington, the FBI, that the Pentagon’s classified information was put up for sale in China. It is said that by manipulating it, Steve Liu expected to get a good job in China. However, in the fall of 2010, he returned to the US and was detained by FBI agents at the airport.

The investigation did not reveal the transfer of secret information from the engineer to the Chinese special services. Meanwhile, the court found that the Chinese engineer had jeopardized the national security of the United States.

According to the newspaper "The Washington post", losses from theft of technology in the Pentagon can be hundreds of millions of dollars. In the past four years, about 100 people have been arrested in the US for spying for China. Many more such cases are classified. They, in particular, are connected with the extensive and extensive Chinese diaspora in the United States, said Oleg Demidov, an expert of the PIR Center on Cyber ​​Security, saying:

"Many members of this diaspora are interested in American high-tech corporations and cooperate with them. In addition to the diaspora, there are simply representatives of the People's Republic of China who are temporarily working in the US to qualify as espionage or cyber espionage. The United States faces the fact that in recent years there have been more and more such cases. "

American companies such as Northrop Grumman, Boeing, Ford and Dow Chemical have suffered from the actions of residents working in China in recent years. One of the last cases was recorded in March. The retired US Army officer, Benjamin Pierce Bishop, was accused of divulging military secrets to a Chinese woman, with whom he had an affair. He gave his girlfriend information related to nuclear weapons, the detection of enemy ballistic missiles and the deployment of early warning systems. In a word, the Chinese diaspora gives the American special services an increasing headache. This is a systemic problem, says Oleg Demidov:

"Such cases of Americans are frankly frightening. Therefore, of course, we should expect a certain tightening of security measures. Meanwhile, no solution that would remove this problem at the system level is not foreseen - it is impossible to completely close the information. As it is impossible and absolutely to exclude cooperation cases American scientists and engineers with Chinese colleagues and passing them some sensitive information. "

Spy scandals in Sino-US relations will increase as China intensifies its efforts to reduce its technological gap with the United States. Obviously, in China itself we can expect a new surge of spyware revelations. Because Beijing will not allow Washington to bypass it even on this indicator.

Ctrl Enter
Noticed a mistake Highlight text and press. Ctrl + Enter
We are
The action “Military service under the contract is your choice!” In Rostov-on-Don: future contract servicemen, exhibitions and “Russian Knights”New photos of the Chinese fighter Chengdu J-20
5 comments
Ad