March 28 2013
22
In early January, a Turkish court sentenced forty Kurds who were accused of membership in the “city wing” of the Kurdistan Workers' Party and sentenced to large prison terms: from six to seventeen years. A few days later, there were reports in the press that the Turkish government together with the imprisoned PKK leader Abdullah Ocalan amounted to plan to end a protracted conflict. According to the plan, people from the PKK will lay down weapon in exchange for granting broader rights to the Kurdish minority, freeing activists sent to prison, securing in the new constitution the principle of the identity of the Kurdish nation. At the same time, representatives of the Party of Peace and Democracy, actively supporting the Kurds, said: before negotiating the cessation of hostilities, the Turkish authorities must release Comrade Ocalan. 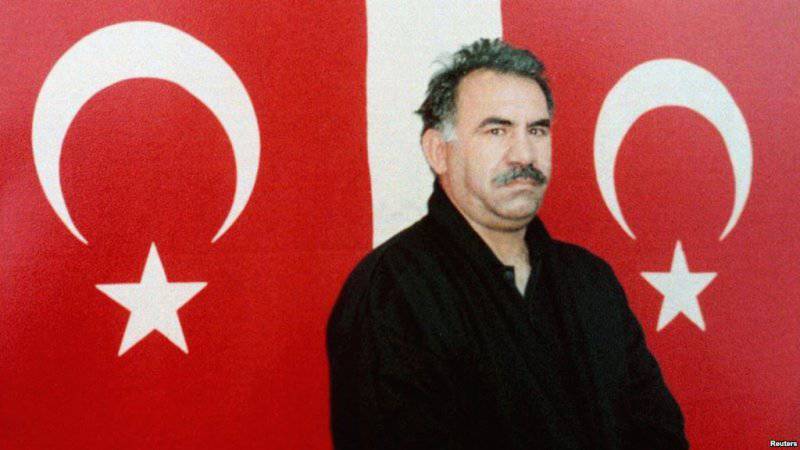 Advances in peace negotiations began last year. Exactly a year ago, a strategy to resolve the conflict was made public. The main role, as a negotiator, was to be played here by the Peace and Democracy Party represented in the Majlis. Wherein rejected participation in the negotiations of Öcalan. But after the prisoners Kurds held an 2012-day hunger strike in prisons in the fall of 67, the balance of negotiations changed. The fact is that it was Ocalan who put an end to the hunger strike: he appealed to the protesters to stop it. Since then, the Turkish government has recognized the authority of Ocalan among the Kurds. And the co-chairman of the Party of Peace and Democracy, Selyattin Demirtas, lucidly explained that if the PKK leader is able to stop the hunger strike with one word, it means that he can also urge the PKK to stop the armed conflict.

At the beginning of 2013, this opinion in Turkey was not shared by everyone. For example, Sinan Ulgen, chairman of the Center for Economic and Foreign Policy Studies (EDAM) in Istanbul, pointed outthat the Turkish leadership is not at all confident that Ocalan will be able to persuade other leaders and PKK members to abandon the armed struggle. For his part, Ocalan also had to strongly doubt that the Turkish government was really interested in more than the simple disarmament of the PKK.

Nevertheless, it was Abdullah Ocalan who was the man who March 21 She urged their comrades to abandon hostilities and terrorist methods and move to peace negotiations with Turkey. “Guns should be silent, and politicians should come to the fore,” it was noted in the statement of Ocalan. He was read aloud by one of the Kurdish leaders in Diyarbakir, the unofficial capital of Turkish Kurdistan. The speech of the leaders of the PKK was timed to the holiday of Navruz.

It became clear from Ocalan’s speech that he supported the withdrawal of Kurdish armed units from the territory of Turkey: “Now is the time when our Armed Forces have better leave the borders of the country. This is not the end. This is the beginning of a new era. ”

Above the stage in Diyarbakir, where Öcalan’s message was read, a huge poster hung: “Democratic solution, freedom for our leader Ocalan!” People brought other posters: “In peace, like in war, we are with you, leader!”

Murat Etkin, Editor-in-Chief, Hurriyet Daily News пишетThat a solution to the Kurdish problem in Turkey could make Erdogan’s rule similar to the abolition of Lincoln’s slavery in America.

Up to two million people listened to Ocalan’s address in Diyarbakir. A huge field on the outskirts of the city was decorated with Kurdish flags and banners of the PKK. People were dressed in national costumes and in the form of Kurdish partisans. All activities were conducted in Kurdish.

On the field, according to RIA News", more than 600 journalists gathered, representatives of diplomatic missions and public organizations came here. In addition to local residents, Kurds from Syria, Iran, Iraq and European countries gathered in Diyarbakir.

“We say that we are tired of fighting and want our husbands and sons to return home. They themselves really want this. Erdogan is by far the best premier. We supported him and will continue to support him in the peace process, ”the RIA correspondent told“News»One of those present. Almost all those who gathered said that for the successful continuation of the peace process, Ocalan, who is serving a life sentence, must be granted amnesty.

“More than anything, we want peace. We still do not fully believe Erdogan and the government. We support the peace process, but we are moving closer to caution, ”said one of the Kurds.

On the same day, following the appeal of Ocalan, a video message appeared in the network, probably recorded in the Iraqi rebel camp. He was read by the field commander of the Kurdistan Workers Party, Murat Karailan. “Starting from 21 March and on, we, as a movement, like the PKK, officially and clearly declare a cease-fire,” cited his Reuters.

This consistent step in the execution of a convicted leader by the Kurds proves the strength of authority that Ocalan has retained.

The Kurdish leader’s statement came in history. how считает Olga Zhigalina, Doctor of History, Orientalist, will change the situation in the region: “Such a proposal will contribute to stabilization in the region, at least in connection with the events on the Turkish-Syrian border and the tension that Turkey is creating in Syria. Historically, Syrian Kurds were thought to have an impact on the Kurdish situation in Turkey. The statement of Ocalan will, of course, contribute to the pacification of the region. ”

Editor-in-Chief, Hurriyet Daily News пишетthat the cease-fire agreement is likely to occur in exchange for the broad constitutional rights for 15 of millions of Kurds in Turkey, as well as the release of thousands of detainees accused of having links with the PKK. Probably, Ocalan will call for the creation of a commission to ensure the safe passage of the fighters of his party to Northern Iraq. The ceasefire will test Ocalan’s influence over the Kurdistan Workers Party, the analyst said. The newspaper also reminds that, as a sign of goodwill, the Workers Party of Kurdistan released 8 Turkish prisoners who had been hostage for about two years in the mountains of Kandil in northern Iraq.

Prime Minister R. T. Erdogan responded to the statements of Erdogan and Karailan the next day. According to the Turkish newspaper Sabah, the Prime Minister of Turkey saidthat the Turkish military will end operations against Kurdish militants if they stop fighting. “I hope that this will take effect as soon as possible,” Erdogan said regarding the appeal for a cease-fire.

It should be noted that R.T. Erdogan, who next year intends to participate in presidential elections as a candidate from the Justice and Development Party, by concluding an agreement with Ocalan and the PKK, and, most importantly, establishing peace in the country (recall that the conflict between Turkey and The PKK claimed forty thousand lives since 1984, it can get huge political dividends. It is unlikely that the PKK will break the promise of a cease-fire made by 21 in March: the Kurds are counting on the release of their leader. He himself is also set to cooperate with Erdogan: it is time for the will.

Observed and translated by Oleg Chuvakin
- especially for topwar.ru
Ctrl Enter
Noticed a mistake Highlight text and press. Ctrl + Enter
We are
Turkey against the Kurds. Is there a new phase of conflict ahead?Kurds + Turkey = Turkish Federal Republic?
22 comments
Ad