In Lithuania, it was decided to restore the monument to the squad of punitive - participants of the Holocaust 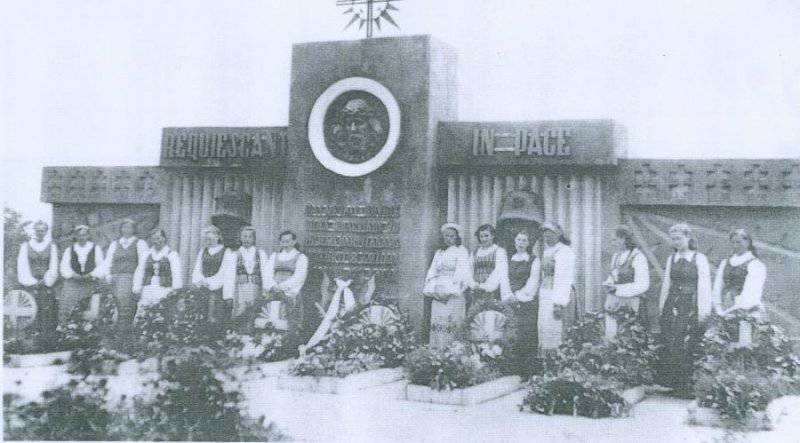 In Lithuania, the collection of funds for the restoration of the monument to the “partisans who fell in the struggle against the Bolsheviks” in 1941 has sharply accelerated. The money donated to the authorities and the district and the republic. As follows from archival documents, the authorities are going to perpetuate the memory of the fascists, who exterminated thousands of Jews during the war.


As it became known on Monday, in Lithuania, the collection of funds for the restoration of the monument to the “partisans who fell in the fight against the Bolsheviks” in June 1941 in the town of Obelyay (Rokiskisky District) has sharply accelerated.

By the end of last week, the amount of money collected exceeded already 50 thousand litas. Of these, 30 thousand litas were previously received from district authorities, 23 thousand - in the form of private donations and, finally, 3 thousand promised a genocide center (total 56 thousand). Recall that this government center is headed by Birute Burauskaite, who last year, in an interview with the VIEW newspaper, again demanded compensation from Moscow for “damage from occupation”.

A concrete monument (three meters in height, eight meters in length) was installed at a local cemetery during the Nazis in the fall of 1941. In the center of the memorial is a bas-relief of Christ, on both sides of it are images of Lithuanian soldiers in helmets and the Latin inscription “Requiescat in pace” (“May the peace rest in peace”). Another (Lithuanian) inscription reads: “Eternal memory of the partisans who fell in the fight against the Bolsheviks in 1941 for freedom, the Lithuanian bows his head. 15.X.1941.

This monument stood in Obelai until the middle of the 1960-s, after which it was dismantled.

As the “Delphi” portal reminds, the project of the monument was created by Russian by origin - a native of Vilnius, a native of the family of Old Believers Gurii Kateshchenko. By education an artist-sculptor, at the beginning of the war, Kateshchenko worked at Obelai station as a simple repairman, by the order of the Germans, he at the same time painted portraits of Hitler and created a draft of the monument to "partisans". His brother Ivan became one of the leaders of the militant detachment, which he helped to perpetuate. 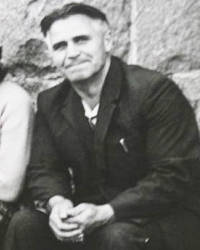 Judging from the materials found in the archives of the KGB of the Lithuanian SSR of the “Opponents” agent case (participants of the so-called “June Uprising” in Obelai), “a group of people whose members in the past took an active part in the semi-military nationalist movement“ Šaulis ”(“ shooters "), Hostile to the Soviet regime in Lithuania, from the very first days of Hitler's Germany’s war against the USSR voluntarily joined the gang of Lithuanian nationalists (as in the KGB certificate) led by certain Mateuskas Kurkletis and Ivan Kateschenko, I acted in the vicinity of the railway station Obeliai, and in the surrounding areas. "

Long before the start of the war, a military detachment was formed here, whose members were trained in fighting the Bolsheviks, there were reports from the border weapon. And in the house of one of the local “activists” (a member of the “Front of Lithuanian activists” created with the direct support of the German Abwehr, Lietuviu aktyvistu frontas, abbreviated as LAF), at one time, 12 German saboteurs parachutists hid.

Even before the “uprising”, a leaflet was written at the LAF headquarters in Berlin: “Brothers and sisters are Lithuanians! It is the hour of the final settlement with the Jews. Lithuania should be liberated not only from the Bolshevik-Asian slavery, but also from the many years of the yoke of the Jews. [...]

The weapon was kept in the church

According to the head of the department of genocide and resistance research at the State Center for the Study of Genocide and Resistance of Lithuanian residents Arunas Bubnis, there were two partisan detachments in Obelyay. One was commanded by Kurkletis, there was a 50 – 70 man. The second was commanded by Police Chief Jonas Vaitkus, another 30 man.

For the purpose of conspiracy, all the weapons received from the Germans were kept in the church. Nevertheless, for active battles it was not enough. As soon as the war began, a former police officer named Bulovas suggested that the partisans go to the station, where there were many weapons in the army echelons. Having acquired this weapon, the “activists” equipped the pillboxes (long-term firing points) at the cemetery and at the bell tower and in late June opened fire on the retreating Soviet troops, killing six soldiers and another policeman.

The response losses of the "partisans" turned out to be approximately equal - eight people, the very ones on whose grave a monument appeared later.

"Wounded, she fell right at my feet"

Here is an excerpt from the memoirs of one of the "veterans", also found by historians in the archives.

“After they sent an uncle-priest to Siberia, a second uncle came, Šaulis,” and suggested learning how to shoot. I was interested in shooting. We went to the forest. Gradually we were joined by others who wanted to shoot. Over time, formed a fairly large group.

My uncle was very pleased, he always called us patriots of Lithuania. He joked all the time that the NKVD and the GPU did not send those out ... At first we were taught to fire pistols, then from carbines. We began to talk about the harm that the Bolsheviks inflicted on Lithuania and the Catholics, on the need to fight for the liberation of Lithuania from the communists ... Five-pointed stars were drawn on the targets, and then, just before the war, they were six-pointed. They argued that all Jews were Bolsheviks and that they were guilty, that so many patriots were sent to Siberia. Then we were divided into groups.

Our detachment was led by the Virsila (foreman) of the Lithuanian army. He constantly said that soon all the Jews and commissars would come to an end ... In the evening of June 21, the virhila gave us a combat mission. We had to be on the tower of the church, watch the bridge and report what was happening there. 22-th early in the morning began the bombing of the airfield, stay on the tower was dangerous and useless, and we were removed from there. In the evening we were handed white bandages and said that we would conduct a partisan struggle against the Soviets ...

We were ordered to go to the indicated addresses, collect Jews and deliver them to the prison, to the Jesuit seminary or to the former police stations, turned into partisan headquarters ...

I did not immediately notice that we were joined by criminals released from prison. During the arrests of the Jews, they killed right in the apartments of everyone they found there, and they took the things they liked with them, immediately shared money, jewels ... Our chef was very pleased with the unexpected assistants. He offered us to take everything that fits. Pogroms began. We were helped by the wipers and their loved ones. They showed the apartments of Jews and Soviet employees, they themselves plundered their former neighbors ...

I, being a Catholic believer, avoided entering the houses and tried to stay outside. But they noticed this and began to say that I am a coward and that I pity the Jews. Virshil decided it was time to “re-educate me”. He pulled a girl out of one of the houses, put her on the edge of the porch, thrust his gun into my hands and forced me to shoot at close range. Wounded, she fell off the porch right at my feet. I finished it, as well as other wounded, vršila. This sadist liked to shoot the wounded in the head. I still can not forget the eyes of a blond girl wounded by me, widened from fright, I can not forget how she looked at me when she was aiming at the vhershila ... ”

LAF fighters are not limited to pogroms. Over the course of several summer months, on their own initiative and with the approval of the Germans, they began a mass extermination of Lithuanian Jews. Already in July, 1941, in the village of Vyujona in the Rokiskis parish and in the forest of Steponiai in the Zhebishk parish, they killed 460 civilians.

Another mass execution took place on 25 on August 1941 of the year in the village of Diedeliškės of the Obeleui Volost, where 1600 civilians (old men, women and children) from Kamaus, Rokiskis, Pandelis and Obelai were killed.

The most massive was the execution of 15 – 16 in August in the Vialnedobes forest near the village of Bayorai, when 3207 or 3208 Jews were exterminated - the civilians of Rokiskis, Kamaus, Skapiškis, Suiwaniškės and Svedasai. According to an eyewitness to the massacre of Zenonas Blinas, "the Jews had to jump down into a three-meter-deep moat, before that stripped to the waist": "Armed men pacing around the moat, who were all in the blood of their victims, shot at them. Women screamed, cried. Local residents also gathered. At first, they were satisfied with what was happening, but then they also started screaming in horror. ”

Nevertheless, in today's Lithuania they prefer to keep silent about these facts.

Monument to the executioners and punishers

After ten years of camps, Gurii Kateschenko returned to his home in Lithuania, worked in the inter-collective farm building trust of the Trakai district, was deputy director of a woodworking plant in the town of Rudishkes. He died in July 1983.

Back in 2009, the “people's” monument to the “partisans” - accomplices of the Nazis in Obelyay was included in the list of cultural monuments of republican significance, and on October 29 2010, the Rokiskis regional council, preparing, apparently, to adequately celebrate the 70 anniversary of the “June Uprising” , Decided to restore the monument. It turned out, however, that this requires 167 thousand litas (50 thousand euros), in connection with which the district authorities and the public announced the search for sponsors. And not only in Lithuania itself, but also far beyond its borders.

After the regional authorities allocated for the restoration of the monument 30 thousand litas, the matter got off the ground: 15 thousand litas was given by the Lithuanian concern Achemos group, still 8 thousand litas were received from private donors.

“I myself come from Obelai. Entirely and fully support the idea of ​​restoring the monument, ”Aloizas Yochis, head of the Rokishsky District Administration, told the VIEW newspaper. - This project is also supported by the district administration, which has allocated funds for this noble goal. Nevertheless, the idea of ​​restoring the memorial should be supported not only by the authorities, but also by the community of the district and the parish. The contribution of each individual, even the most modest, is important. And we, the leaders of the district administration, will conduct a conversation with the businessmen of our district and the whole republic, we will convince them to financially support the work on the restoration of the monument. Only by combining our efforts, we can achieve the goal. "

According to the head of the Lithuanian “language police” (the so-called State Commission for the State Language), also a native of Rokiš district, Donatas Smalinskas, there’s no need to restore the monument: “The decision to restore it was made by the district council and now it must be implemented. After all, when the war was going on, Lithuania was occupied by the Germans, this did not prevent the residents of the Obeluy volost from raising funds for the installation of a monument to rebels and victims of the Soviet terror. ”