L.Mlechin: “The cause of the Middle East conflict is not“ occupied territories ”, but the envy of the Arabs to Israel” 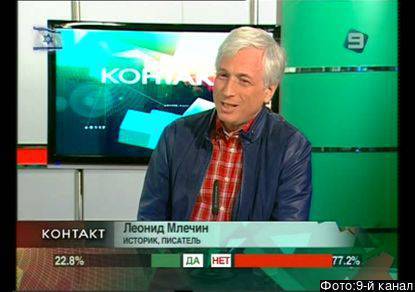 In the evening of March 11, as part of a ten-day visit to Israel, well-known writer and filmmaker Leonid Mlechin met with residents of Ashkelon.


In the course of the creative evening, the participants of which were about 400 people, the premiere of the new documentary film Mlechin about the latest stories Middle East, which bears the working title "Trap for Andropov."

The film is dedicated to little-known facts of direct intervention by the leadership of the USSR in the Middle East conflict in 1983, when it was not only about massive deliveries weapons the regime of Hafez al-Assad, involved in the bloody events in Lebanon, but also about the transfer of servicemen of the Soviet army to our region.

According to the data that Leonid Mlechin was able to gather, several thousand Soviet soldiers and officers fought on the side of the Syrian army, which helped Palestinian terrorists fight the IDF. Thirteen of them died, more than 200 were injured, many of them were disabled.

At a certain stage, according to Leonid Mlechin, the Kremlin leadership was seriously discussing the option of bombarding an Israeli nuclear reactor in Dimona. However, the fear of open confrontation with the United States and the reluctance to repeat the situation of the Caribbean crisis of forty years ago still forced Andropov and his entourage to “press the brakes”.

The film details the history of Soviet-Syrian relations and the peculiarities of Assad’s diplomatic contacts with Kremlin leaders.

“Hafez Asad never left Moscow empty-handed, getting off with only vague promises - for example, about providing the Syrian territory with a naval base on the Mediterranean coast.

Kremlin leaders, as a rule, met him halfway and once agreed to supply arms to Syria in the amount of about a billion rubles (recall that the official dollar / ruble exchange rate was then in favor of the ruble). And only when it became clear that Assad wants to fight with Israel, using not only Soviet weapons, but also Soviet soldiers, did a certain cooling of relations between Moscow and Damascus begin, ”noted Leonid Mlechin.

Referring to the background of the Arab-Israeli conflict as a whole, Leonid Mlechin said that our enemies are driven, above all, by a feeling of envy and restrained pride, and not at all by the desire to liberate any "occupied territories" because they have more than enough land .

“The Arabs do not understand why it is lagging behind in economic and social development. After all, they have everything - giant territories, huge reserves of oil, gas and other minerals.

But for some reason Israel is flourishing, and they are lagging behind. The Arab leaders do not have the courage to admit that the main problem is the inefficiency of the totalitarian leadership of these countries, the aimless squandering of billions of petrodollars.

And in this sense, Israel for them is just an invaluable find, so it can be pointed out as the main cause of all the disasters of the "Palestinian" and other peoples of the Middle East.

True, popular discontent in Arab countries still accumulates and, sooner or later, erupts outside, for example, in the form of the "Arab spring". And the intrigues of foreign imperialism, as we are sometimes assured, have nothing to do with it, "said Leonid Mlechin.

Ctrl Enter
Noticed a mistake Highlight text and press. Ctrl + Enter
We are
Israel-Kurdistan: New Middle Eastern Alliance
187 comments
Information
Dear reader, to leave comments on the publication, you must to register.