Alexander Sergeevich Kudashev - a pioneer of the Russian aircraft industry

March 15 2013
0
History aviation saturated with bright personalities. Many of them have gone down in history forever, the names of others have almost disappeared from memory. Among the latter can be attributed to Prince Alexander Sergeyevich Kudashev, who is a pioneer of domestic aircraft construction. The first success of Russian aviation on May 23, 1910 is connected with his name. On this day, a professor at the Kiev Polytechnic Institute, Prince Alexander Kudashev flew several tens of meters on a plane of his own design. It was a Kudashev-1 biplane. Up to this point, flights in Russia were carried out only on foreign aircraft.


Alexander Kudashev was born 28 in January 1872 of the year in St. Petersburg, he belonged to the old princely family of the Kudashevs. In 1895, he graduated with honors from the Petersburg Institute of the Corps of Railway Engineers, after which his first job was the construction of the Tiflis-Kars railway line. I applied my knowledge to a young engineer when building a bridge across the Kur river. For his successful work in various engineering positions, the highest order for the number 62 of 8 August 1900, the prince was promoted to titular advisers.

Already working as an engineer, Alexander Kudashev begins to get involved in scientific research on construction issues. Feeling that he has a vocation for science, the prince decides to elect a professorship for himself and writes an appeal to the leadership of the Ministry of Communications to send him to teach in the newly opened Kiev Polytechnic Institute (KPI). His request was accepted and in September 1900 of the year in the fate of A. S. Kudashev there was a coup, he was hired to work at the Kiev Polytechnic Institute. However, work in this institution breaks almost 4 year. The prince, due to personal circumstances, is leaving for 4 for the year, returning to the institute only in 1906. Then he was appointed a teacher of the course of building art. It is possible that it was during his stay abroad that the prince began to be interested in aviation. 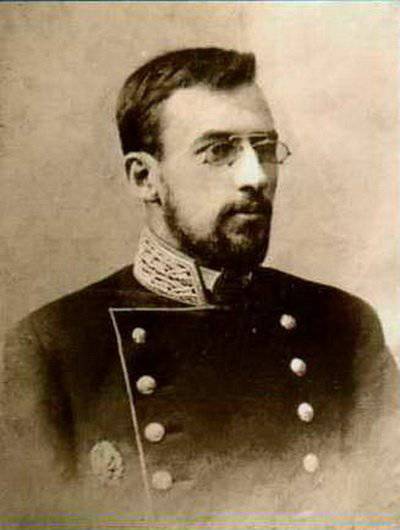 Alexander Sergeevich Kudashev
Another possible push in this direction can be called a lecture that 4 of December 1908 of the year was conducted at the KPI by the professor of mechanics N. B. Delone. In the Big Physical Auditorium of the Institute, he gave the audience a lecture on “Aeronautics”, which was accompanied by a demonstration of motion pictures and slides. This lecture was a great success at the institute, and after a few days 10 a student aeronautic circle was created here. Part of the KPI teachers read special lectures for its members.

In 1909, the student aeronautic circle was transformed into the Kiev Society of Aeronautics. At the same time, Kudashev joined the aviators, who for several years of enthusiastic work managed to acquire solid knowledge in a new field, and also gained practical experience in order to design his own aircraft.

In February, 1910 of the year, while in France at the aviation week in Reims, Kudashev first flew on an airplane, he did this together with the famous Russian aviator M. N. Efimov. Returning back to Kiev, Kudashev decides to build with his own money the first airplane in Russia, called Kudashev-1. 1 March 1910, he wrote a statement addressed to the Director of the Institute with a request for permission to build a temporary wooden shed near the chemical building. Here he will assemble an airplane of his own design.

“Kudashev-1” at the Syretsk Hippodrome
In the second half of May 1910, Kudashev finished work on his brainchild. "Kudashev-1" was a shaped biplane with a pulling screw, its weight was 320 kg. The biplane was equipped with an Anzani engine with an 35 horsepower. The aircraft had a front elevator, a rudder and tail stabilizer. The area of ​​the bearing surfaces was 32 square. meter, the frame of the aircraft was made of wooden slats, which were covered with rubberized canvas. 23 May 1910, the aircraft was transported from the chemical corps to the Syretsky Hippodrome. It was here that in the presence of a large number of reporters from Kiev newspapers, as well as numerous members of the Kiev Society of Aeronautics, Alexander Kudashev made the first flight on an aircraft of his own design.

Although this flight was short and lasted only a few tens of meters, it was he who was the first Russian flight on an aircraft of his own design. All Kiev newspapers wrote about this event, and Aeronautical Bulletin presented a detailed report of this event, which makes it possible to speak of Prince Kudashev as the first national aviator. It is worth noting that right after Kudashev’s plane two more took off. So 3 of June 1910 of the year in the same Kiev I. I. Sikorsky performs a flight on a BiS-2 plane, and 6 of June near St. Petersburg, in Gatchina, on a biplane of the structure Ya. M. Gakkel takes off VF Bulgakov. In terms of their duration, these flights differed little from Kudashev's achievement. Based on this, modern researchers believe that the date of birth of Russian aviation is 23 of May 1910 of the year (5 of June in the new style).

According to the available information, "Kudashev-1" was lifted into the air just 4 times. Unfortunately, when making the next flight, the device flew onto the fence and was seriously damaged. In the fall of 1910, the prince completed the construction of his new Kudashev-2 aircraft. The new truss biplane was equipped with a more powerful “Gnome” engine that had 50 horsepower. The aircraft had the usual horizontal tail, the front elevator was absent. The length of this aircraft was 8,75 m., And the area of ​​its wings - 41 square. m., the weight of the airplane was 300 kg. A characteristic feature of this development was the chassis design. Ash poles were used as racks in this chassis; a through axle with wheels was attached to the bends of which on special rubber shock absorbers. According to the well-known aviation history researcher and aircraft designer V. B. Shavrov, this scheme became routine in the future, while it was almost immediately borrowed by the French, who used it on their Dederdussen aircraft. Unfortunately, Kudashev’s second biplane did not last long. In the autumn of the same year, during the night flight, the plane crashed in an accident. 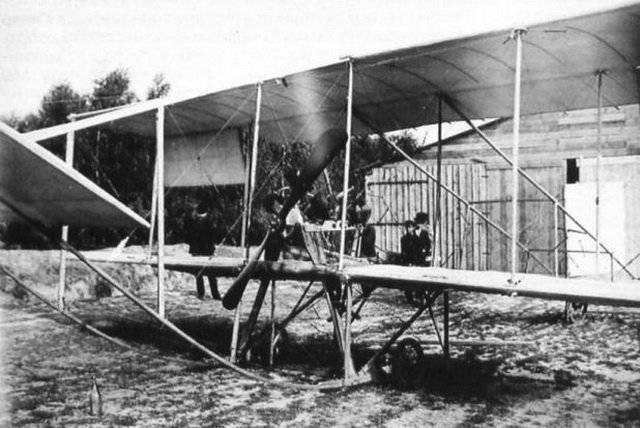 "Kudashev-1" near the barn in which it was built
Another setback did not stop the aeronaut’s creative enthusiasm. By the winter of 1910-11, he had conceived the next, third plane. "Kudashev-3" also had a truss fuselage, but did not have plating. The designer again used the Anzani 35-strong engine and arc chassis. The design of the aircraft was extremely simple, easy and cheap. There is no reliable information about the flight of this aircraft, but it can be stated with complete confidence that the prince built an 3 aircraft with his own money.

The major Russian industrialist Shidlovsky, who in 1911 invited Prince to the Russian-Baltic Carriage Works (RBVZ), learns about the aviation achievements of Alexander Kudashev. At this time, the aviation workshop begins to work here. It was in Riga that the prince built his 4 aircraft, which is a development of the previous monoplane. The aircraft designer uses the Gnom engine with the power of 50 hp. and provides for the use of 2-x sets of interchangeable wings: one designed for flight speeds up to 60 km / h, the second - a smaller area - for flights at speeds up to 80 km / h. Kudashev applies a rubberized fabric, produced at a local plant, to the wing skin. His first flight, "Kudashev-4" (RBVZ-1) makes 2 April 1911. 10 days later, the plane takes part in the first Russian International Aeronautical Exhibition, which took place in the Mikhailovsky Manege of St. Petersburg. April 28 aircraft was appreciated, having received a large silver medal from the Imperial Russian Technical Society.

Although in Riga, Alexander Kudashev is able to create his own aircraft, his main task at the plant was to adjust the production of Sommer type biplanes. In 1911, 7 made such biplanes at the request of the military at RBWZ. However, this aircraft did not have high performance, for example, its ground speed was only 60-65 km / h. Sommer-RBVZ could also be produced as a training aircraft, but its production was fairly quickly completed. The reason for this decision was the crash that occurred 28 May 1911 of the year. On this day in St. Petersburg, during a demonstration flight, the factory pilot V.V. Smith died. 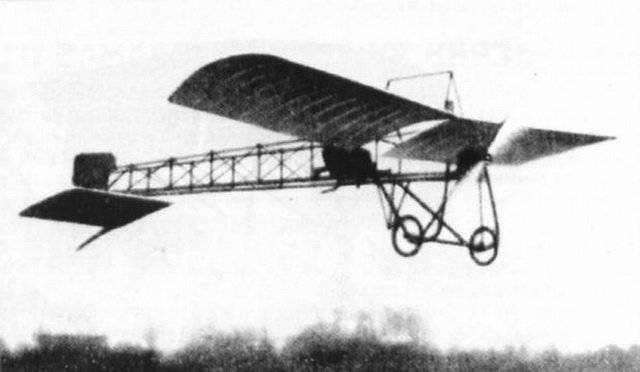 Kudashev-4 (RBVZ-1)
In fact, "Kudashev-4" becomes the last independent aircraft of the designer. In 1912, the aviation production of the Russian-Baltic Carriage Works was transferred to the capital of the Russian Empire. Then Shidlovsky offers the prince to go to the design office of his former student Sikorsky. 38-year-old Alexander Sergeevich accepts this invitation, unable to compete with the new talented generation of aviators.

In the subsequent 3 of the year, this design bureau, led by Igor Sikorsky, was the first in the world to produce large multi-engined airplanes under the names Russian Knight and Ilya Muromets. At the same time, according to one of the versions, the individualism and love of freedom of Prince Kudashev are in conflict with the command style of work at the RBWD, and in 1914, he decides to leave aviation. According to another version, the prince quite fruitfully worked and collaborated with Sikorsky. Anyway, the designer understands that he has already fulfilled his mission in Russia and is unlikely to be the first one again. In the same year, Kudashev leaves his homeland, having gone to France.

His further story is also unclear. According to one version, he returns to teaching in France. But neither the date of his death, nor the place of burial remain unknown. According to another version, after the outbreak of the First World War, the prince returned to Russia and volunteered for the front line, dying in the 1917 year. So it was hard to say or not. But his grandson, after nearly a decade 3, did just that. In 1941, he arrives in the USSR from France, graduates from artillery courses and dies in the battles near Moscow in the autumn of the same year.

Ctrl Enter
Noticed a mistake Highlight text and press. Ctrl + Enter
We are
Poet, diplomat and musician. 220 anniversary of the birth of Alexander GriboedovBurt Rutan - Aircraft Genius
Add a comment
Information
Dear reader, to leave comments on the publication, you must to register.