Did the Ukrainian military lose their armed battle dolphins during training? 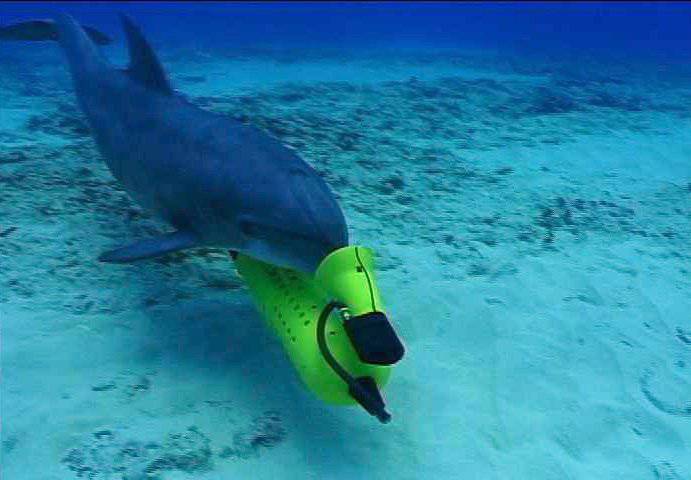 Employees of the State Oceanarium Research Center of the Armed Forces of Ukraine lost three combat dolphins with firearms attached to them during training on the high seas, the report of the head of the center turned out to be for journalists.

The training of dolphins, held 24 February in the open sea at the site number 7, was attended by five mammals equipped with sets of IOU-75-03 (individual firearm, which is mounted on the head of the dolphin), transmit the "Events of Crimea".

During training, three dolphins, despite the precautions taken, left the site with attached firearms ready to use. The staff for four hours trying to detect missing dolphins by visual observation, but to no avail.

In connection with the incident, the leadership of the center asked the command fleet give permission to conduct sonar searches to return dolphins to the base.

The press center of the Naval Forces of Ukraine refused to comment on this information.

As the newspaper VIEW, reported in October last year, the Ukrainian military announced the resumption of training of combat dolphins. Mammals were trained under the combat program of attacks on underwater saboteurs and ships; for this purpose, a knife or a pistol was attached to the dolphin’s head. The main task of the animals was the detection of objects under water.

In January of this year, the staff of the State Aquarium in Sevastopol developed a new methodology for combat dolphins and began training 10 mammals to perform special tasks of the Ukrainian military fleet.

According to experts, fighting dolphins could help to ensure the safety of the location of the Black Sea Fleet and the Ukrainian Navy in the waters of the Sevastopol bays. There are only two combat dolphin training centers in the world so far - this is the San Diego base in the USA and Sevastopol.

In Sevastopol, the dolphins for the needs of the then Soviet Navy began to cook with 1973 year. Specially trained animals found weapon and military equipment at the bottom of the sea, could attack the combat swimmers and enemy ships with weapons and explosives fixed on their heads. After the collapse of the USSR and the division of the Black Sea Fleet, the military unit in which combat dolphins were trained was transferred to the Ukrainian side, and the dolphins began to be used for peaceful purposes, in particular for the treatment of disabled children.

Data on Russian programs for the use of animals in the interests of the Navy were not disclosed.

The season of horror stories about Crimea started: fighting dolphins on the high seas

In Crimea, with the approaching holiday season, the season of traditional horror stories opens - today a number of media outlets received anonymous letters, the author of which claims that armed fighting dolphins fled from a military base in Sevastopol and attaches a report from the head of the Ukrainian Armed Forces Research Center. This “document” to the email received and the site “Crimea. Comments”.
In particular, the document states that February 24 conducted training dolphins in the open sea. 5 dolphins equipped with IOW-75-03 sets (an individual firearm mounted on the animal's head) took part in the training.

Contrary to the precautionary measures, three dolphins left the water area of ​​the site, having firearms ready for use. The personnel of the scientific center, which was on site, for four hours tried to locate the missing dolphins by visual observation, but without success.
“In connection with the incident, the leadership of the center asks the fleet command to give permission to conduct echolocation searches in order to return the dolphins to the base, which requires additional forces and technical equipment. I also ask you to conduct an official investigation of the incident, ”the report says. 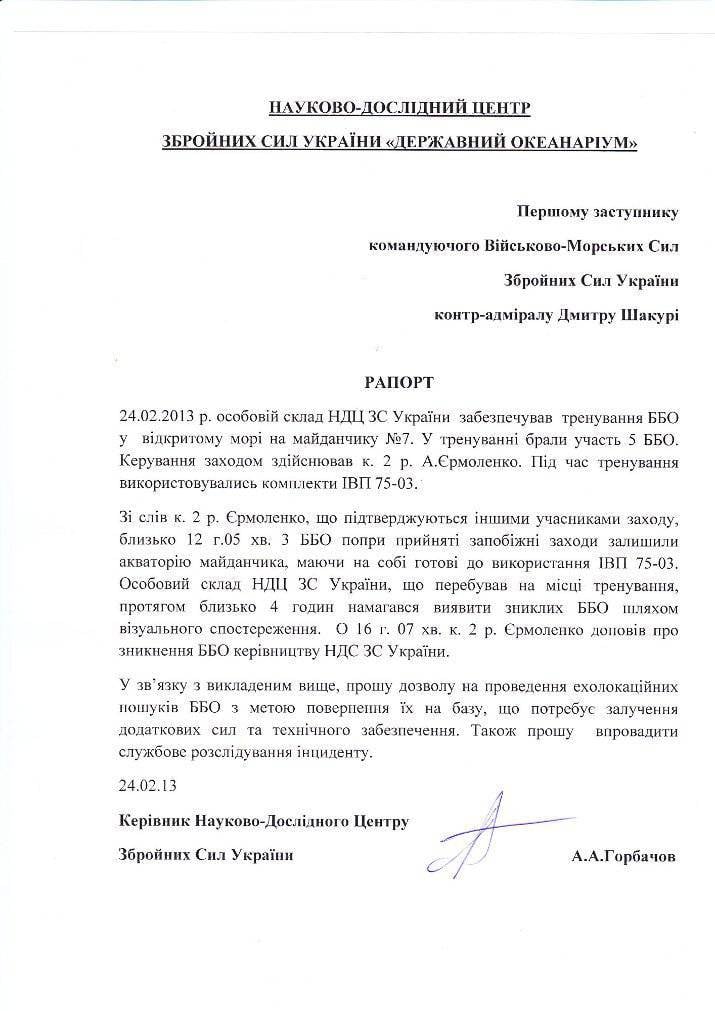 However, as it turned out, this document and everything stated in it is nothing more than a “duck”. In the Research Center of the Armed Forces of Ukraine "State Oceanarium" over this news they simply laughed and said that they didn’t have such dolphins at all.
“Any devices of IVP-75? We do not even know what it is. We have no idea what it is - IVP-75-03. And the date chosen - February 24, Sunday, when all normal people rest. For some reason, we should work at this time, ”said Anatoly Gorbachev, director of the State Aquarium Research Center of Ukraine’s Armed Forces. - This is pure fiction. In order to lose something, you have to have it, but we have them (dolphins - ed.) And there is no trace. This is pure provocation someone throws, we have a guess. In the spring, such a thing was thrown once, now again. ”

http://crimea.comments.ua/news/2013/03/11/171243.html
Ctrl Enter
Noticed oshЫbku Highlight text and press. Ctrl + Enter
We are
The guys from our yard. Photo report from the opening of a unique sports groundUkraine resumes training of combat dolphins - in their own and Russian interests
Military Reviewin Yandex News
Military Reviewin Google News
49 comments
Information
Dear reader, to leave comments on the publication, you must sign in.