How congressmen remove Rosoboronexport from the road

December 5 2012
39
"We cannot even indirectly subsidize the massacres of civilians in Syria." Such words of Republican John Cornine, full of universal humanism and true democratic notes, literally forced all US senators to press the “AGAINST” buttons - against the Pentagon cooperating with Rosoboronexport. 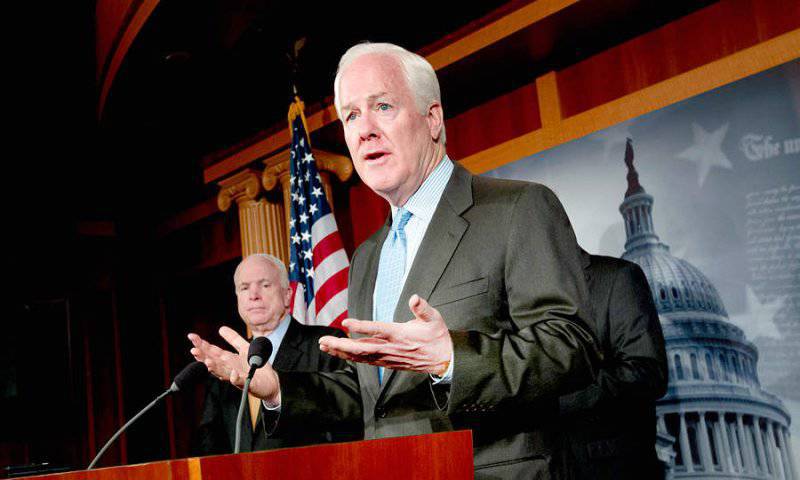 Senator Cornyn, who is so concerned about the security of Syrian extremists, has become the main initiator of the ban for the main US defense agency in terms of cooperation of this department with the above-mentioned Russian company.

Recall that in the summer of the outgoing 2012, such an initiative was supported by the House of Representatives of the American Congress, which no less than Kornin was outraged by the fact that the “peace Pentagon” was buying weapon in Russia, "with all the forces supporting the bloody regime of Assad." Like, where is this good! There is an urgent need to take effective democratic measures.

And now, when both chambers expressed their indignation about the plans of the Pentagon to buy helicopters from Russia for rearmament of the army of Afghanistan, on such contracts with Rosobornexport, it is possible that in the near future a bold cross will be put. However, with no less chance any fat cross on the plans of the Office of Leon Panetta may not be, because in the US the Republic is not a parliamentary, but a presidential, and the last word is Barack Obama. In other words, now only Obama can decide the fate of the existing Pentagon and Rosoboronexport contracts.

Senator Cornyn, apparently realizing that President Obama could easily step over the parliamentary ban, decided to switch to using additional “noise grenades” designed for impressionable American souls. The Republican declares that he has long had information that Russia is supplying weapons to Syrian government forces. According to Mr. Kornin, over the past two years, the Russian Federation, with the participation of Rosoboronexport, signed contracts with Syria for almost 3,5 billion dollars. According to the letter of the contracts, the MiG-29М / М2 fighters, anti-ship missiles, Yak-130 airplanes, coastal Bastion missiles with Yakhont missiles, Pantsir-1 missile systems, mobile radar systems should arrive in Syria. Kornin himself literally appealed to his colleagues in Congress to urgently force the Pentagon to abandon the idea of ​​buying military equipment from Russia, even if this technique is aimed at meeting the needs of the "friendly" US Afghan army ...

The most amazing thing is that Senator John Cornyn, in fact, has become the next inventor of the bicycle. After all, Russia did not intend and does not intend to conceal from the so-called world community information that it sold and sells military equipment to Damascus in the framework of the agreements reached earlier. At the same time, Moscow does not see anything reprehensible in the concluded contracts, in contrast to Mr. Kornin, who is considerably fidgeted. After all, Russia supplies weapons not to a disparate gang of thugs of various stripes, as many apologists of universal democracy do in detours, but to Syrian authorities, who are supported by the majority of Syrian citizens. Russia concludes contracts with the current, that is, legitimate, authorities of the Arab Republic, and do not sponsor the surreptitious extremists of various nationalities who, with their hands in their blood, declare their adherence to democratic ideals. And if Russia leads the arms trade openly, then this is Mr. Kornin’s private affair, how to treat Russian economic activity: positively or negatively. The opinion of a single senator should be of little interest to Russia itself.

But the fact that Kornin, as they say, pulls up his people to make the necessary decision is another matter altogether. And it is precisely in this issue that the keys of such a zealous concern of certain American congressmen for the cooperation of the Pentagon and Rosoboronexport should be sought. In principle, the search for these keys will not make any effort, after all, after the words about “supporting Rosoboronexport” of the bloody regime of Assad, ”they themselves surrendered their attempts with giblets, saying that the Afghan army should receive only American weapons. Even if not new, but American ...

So it turns out what Mr. Kornin really cares about. Yes, excuse me, damn it, both the Syrian people and their struggle for some kind of ghostly democracy (the ghostly, as Libyan-style democracy makes us understand, and Egyptian too). But Senator Cornyn hurts his soul for the native American companies involved in the production of weapons, and who are in constant “creative” search for ways in which their products could be driven off ... And when you consider that the US Congress is full of a box of parliamentarians who are active weapon lobbyists , the goal is clear: the formation of new markets and getting rid of the main competitors. And how else to get rid of competitors, if you do not suddenly become the accusers of their (that is, Russian) plans to support the “worst regimes” of the planet.

But what is the idea of ​​something ?! In order to save the companies that put Mr. John Cornine himself in the Senate seat, he goes along the shortest path. Clearing the way for their main "patrons" can be, if you blame the bloodthirstiness of any country, which supply weapons competitors. So it was with Iraq, so it was with Libya, so it became with Iran and Syria. In this scenario, it turns out that the main litmus test to determine the undemocratic power in one country or another of the world is the contract of the authorities of this country with Rosoboronexport ...

Senator Cornyn (recall: the Republican), inventing his bicycle, is obviously going to kill two birds with one stone: not only to clear American manufacturers for the same Afghan market for weapons, but to convince their fellow parliamentarians and all American citizens that The US president, recently re-elected for a second term, may be among the opponents of world democratization, if he allows himself to give a damn about the decision of Congress.

But we can resent as much as we like about the decision of the House of Representatives and the US Congress, but this is not easier for our state treasury. They said in the USA: “not to conclude transactions” - and they will not conclude. For them certainly will not rust ...

Moscow often has to look for buyers for its weapons for years, and Cornyn, sorry, blurted out a couple of times about “bloodthirstiness”, and with this word alone can contribute to the influx of money into the American treasury, and sitting on dry rations of some Russian manufacturers. But the Americans are collecting Afghans to give loans for the purchase of military equipment and weapons, and continue to work according to the classical market system: they will sell their own equipment to those for their own credit funds - this is American-style support. As they say, envy progressive democratic thought. Only business is nothing personal.

Or maybe they are taking revenge on Russia in this way for the law on foreign agents ... After all, in this case too much is tied to money.
In general, we are waiting for what Mr. Obama will say. It will be extremely interesting to find out: is it really a presidential republic in the US, or is it only written in geographical directories ...