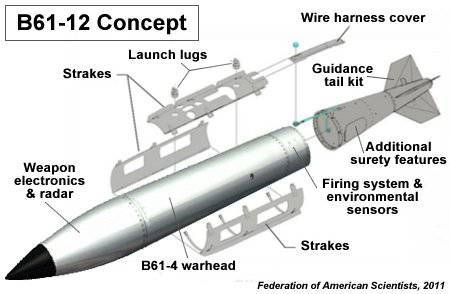 Boeing will develop a new tail unit for the B61 (Mod 12) free-fall nuclear bombshell as a measure to extend the life of these munitions, UPI reports on November 29. The contract was signed with the US Air Force in the amount of $ 178 million and its implementation will take three years.

The B61 nuclear bomb was developed at the start of the 1960s and entered service in the 1968 year. The upgraded B61 (Mod 12) will receive new parts to improve reliability.

“Boeing provides a wide range of reliable and affordable solutions for aviation free fall ammunition for more than 10 years. We will apply our successful experience in new tail fins to make these bombs a vital containment capability, ”said Debbie Rub, vice president and general manager of the Missile and Unmanned Aerial System Division.

B61 (Mod 12) will be planning, which will increase the range of application, and will be equipped with a nuclear warhead with 50 CT power. Improving the accuracy of the hit will allow the bomb to have a striking power comparable to the B61-7 strategic nuclear bombs with 360 CT power, reports fas.org. New bombs will go into service with the F-15E, F-16 and Tornado fighter-bombers deployed in Europe, and will also become part of the F-35 stealth fighter armament.

Participants in Western military forums, in particular, forum.keypublishing.com, believe that in this modernization program, Boeing will use JDAM technology - equipping free-fall bombs with a high-precision guidance system and control surfaces. Some do not see the point in accurately targeting nuclear bombs, since the B61 has an 20 km radius of destruction, but some forum participants are of the opinion that high-precision targeting can be useful for hitting enemy’s highly secure underground objects.