We are not slaves! Slaves are not us! 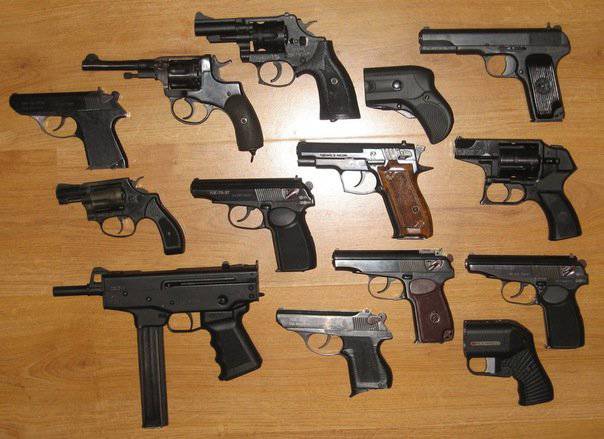 For the umpteenth time in society, the question arises of a thoroughly bludgeoning: To be or not to be a gunshot arms in the hands of ordinary citizens? Again and again, including on the pages of this site, we return to a serious dispute about this ... I will say about myself. Until recently, I was against weapons, but times change, so does opinion. I will try to win over to my side those who have not yet matured to the idea that the weapon should be allowed.

A traffic accident that ended in shooting took place on Friday evening, 9 in November, in front of the house number 39 on Nizhnye Mnevniki Street in Moscow.

Faced two cars - "Mercedes" and an unidentified foreign car. During the proceedings, the driver of the Mercedes and his brother opened fire from a traumatic weapon, according to Echo of Moscow. In response to these actions, the driver of the car, whose brand was not installed, shot them from a firearm.

As a result, the driver of the Mercedes got a chest wound. The victim was taken to hospital where he died in the intensive care unit.

- It was established that 9 in November in 23.20 opposite the house number 39 on Nizhny Mnevniki Street between 43-year-old Ashot Sargsyan and his 45-year-old brother Arthur on the one hand and an unknown driver of a silver-colored foreign car had a conflict, in which it was concluded, it was not installed, but Accident as it turned out was not. Probably just the driver did not give way to "hot mountaineers" on a Mercedes.

As experts later established, the Sargsyan brothers fired on their opponent 14 traumatic bullets. In response, the driver of an unidentified foreign car twice fired military weapons, allegedly a Makarov pistol, and one of the bullets hit Ashot Sargsyan in the chest.

- The wounded man was brought to the hospital in a state of clinical death. Doctors tried to reanimate it, but without success, - the interlocutor told. - The driver of a silver foreign car disappeared from the scene. Now measures are being taken for his search.

Investigative Committee on the fact of firefight opened a criminal case According to article 105 of the Criminal Code of the Russian Federation "Murder".

Everyone remembers this case? (by the way, the "guilty" is still not found ...). Feelings are contradictory. Imagine: You are driving at night, in your car, perhaps with your wife, with a child ... What are the "cool" on a Mercedes trying to "push" you off the road. You do not give up. In response, the "cool" begin to shoot at you from two trunks ... How do you know that this is a traumatic? Yes, even if so? Imagine the psychological state of your wife, child? His, in the end ... Of course, it was easier to give in, not to get involved, to endure. But I just want to ask: How long ?! In general, maybe there were no women and children in the car, but simply there was a REAL man. He made two shots and killed one of the attackers! I think the survivor Sargsyan, next time will think hard, before firing at anyone, because of the hurt "Caucasian pride."

I would not want to escalate national discord, this is in the internet and so full. But it’s not my fault that Caucasians mostly shoot. Shoot, being confident in their impunity. In fact, one can pay off a court, bribe a police officer, hire an expensive lawyer who has been intimidated by victims by numerous relatives. Only from one there is no salvation, from an overdose of lead in a bad head!

The State Duma amended the law on the police, for which the police get the right to use service weapons against persons who shoot out of hooliganism. Reports about it RIA News.

The author of the United Russia bill, Alexei Zhuravlev, explained that now the punishment for violating the rules for using weapons, if there are no elements of a crime or an offense, can only be confiscation. At the same time, the consequences of indiscriminate shooting are unpredictable and can be compared with acts that contain signs of a grave crime against the life and health of an indefinite number of people. In connection with this document, it is proposed to allow the guards to use weapons to prevent firing and apprehend shooters.

Earlier, United Russia deputies made amendments to the Administrative Code to the State Duma to toughen the punishment for shooting in localities, providing for a fine of up to 50 thousand rubles and arrest for 15 days. The confiscation of weapons is also envisaged, as well as the deprivation of the right to acquire or store them for a period from 5 to 7 years.

Recently, in Moscow, there have been two incidents with shooting at weddings. In both cases, the participants in the wedding procession fired from the car into the air. Later, the arrows were arrested, cases were brought against them.

In order not to be convicted of nationalism (God forbid! I have never been a nationalist!), I want to remind everyone the case of an attack on an Armenian family:


An 52-year-old businessman stabbed three robbers into his home. Gegham Sarkisyan and his family fear that the criminal who survived the bloody massacre will try to avenge the murdered accomplices. The former hunter told in detail how he managed to put three armed bandits on the spot with a kitchen knife.

“They drove my whole family and then started beating up women — they shouted for me to give them money and gold. I gave them everything that I had, but they did not let up! - the man remembers. “I told them I had nothing else, but they did not believe.” When they put a gun to the head of my 7-month-old grandson, I thought I would go crazy.

However, the shot did not sound. Two gangsters grabbed a man and dragged him to another room.

“The rest of the fiends continued to beat the women and torment my children,” continues Gegham. - The sister-in-law and my little daughter managed to escape, they rushed to me and helped me to free myself. I rushed into the kitchen. Grabbed the first knife; One of the criminals chased after me, I turned around and hit him in the stomach. When the second ran, I hit him in the head. I understood that the most important thing was to knock down that with a gun. "And we'll see," I thought.

The next hit the master caught the third criminal. There was only one left. Seeing what happened to his accomplices, the robber rushed to run. The remaining three were no longer helpful.

“They all died before the ambulance arrived,” the businessman continued. - One was injured, but quickly bled out. I do not know how it happened. I was taught to use weapons in the army. It also helped that I was keen on hunting. But my strength seemed to be tenfold when I saw that they attacked my children.

But even now Gegham Sargsyan believes that the trouble has not yet passed.

“Most of all, I’m afraid that the latter may return when I’m not around,” the man laments.

Operatives managed to find out the names of two of the three criminals. It turned out that a company of drug addicts made a raid on the family of a businessman from Bogoroditsk.

As it became known to "Veku", the identities of the two killed in the house of Sargsyan were established. They turned out to be the previously convicted citizen of Georgia 44-year-old Archil Kevlishvili and also 41-year-old Sergei Rozhdestvensky, who served time for drug possession, reported. in the city police.

As you can see, crime has no nationality. And if he had a weapon? Not a knife, but a normal gun? By the way, for reference:
in the US, citizens are killed CRIMINALS 6 times more than they are executed! And this figure is comparable to the number of criminals shot by the police.
In Israel, half of all terrorist attacks are suppressed by armed citizens who are nearby. Ponder - HALF!

And now my opinion, which, as I said, has changed radically:

1. BAN ANY TRAFFIC! People are too irresponsible to use it.
2. DO NOT Pneumatics! For the same reason.
3. ALLOW the firearms short-barreled weapons to carry.
4. ENABLE long-barreled firearms for STORAGE.

Naturally, toughen the selection of citizens who receive the rights to weapons. And most importantly, before allowing a weapon, it is necessary to cardinally review the law on self-defense! Returning to the beginning of the article, I can’t agree with the incriminated article for the gunman. What is this murder ?! Even the excess of the necessary defense measures do not smell! He shot back, after 14-ty shots! And if there was a wife and child? At night, on a deserted street ... What would you do? Would you guess their injuries or not? I think the most that can be presented is the illegal possession and carrying of weapons.

And the last. As is known, "Slaves differ from free citizens in that they have no right to bear arms." I would like to ask, are Moldovans, Estonians, Latvians, Lithuanians much more responsible and smarter than Russians? They were allowed to have weapons, and countries did not drown in bloody bacchanalia.