Sergey Voronin - The Story of a feat 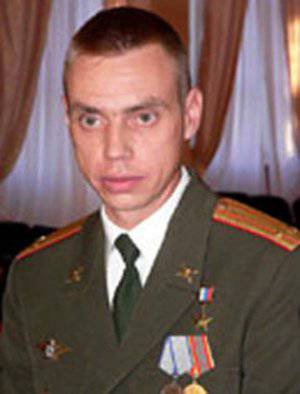 Modern история Russian military conflicts knows many examples showing the inexhaustible strength of the spirit and courage of the Russian soldier, readiness to fulfill the duty of the defender of the Motherland, even at the cost of his own life! A huge number of immortal feats were committed by fighters of federal Russian troops during the war in Dagestan, which unfolded in August 1999 year.

Tando is a small mountain village in the Botlikh district of Dagestan at an altitude of one and a half thousand meters above sea level. Residents just a few hundred people. The village is located on a steep slope of the mountain range in the middle of the distance to the summit. Bottom approaches are protected by numerous hollows. The village can be reached only by several “bridges” with paths. Only one road is available for transport.

In those August days, the hero of this story, Junior Lieutenant Sergei Voronin, commanded a small unit of federal forces. By chance, his 696 Battalion of the 136 Motorized Rifle Brigade was tasked with carrying out the liberation of a settlement called Tando, which in a few days turned into one of the largest and most important fortified areas of the whole area, where several dozen militants settled at once.

Sergey Nikolaevich Voronin was born 12 on June 1973 in the Kazakh town of Kokchetav in a military family. By nationality - Russian. He spent his childhood in Tashkent. The army left in the summer of 1990. He graduated from Tashkent Wok. He served in the Far East. Participated in the first Chechen war. In 1995, he was awarded the medal "For Courage".

17 August battalion tried for the first time to seize the Tando. The plan included a blow from three directions. The first company, passing through the bottom of the ravine, was distracted by fire, the raid group (the third company), together with the battalion commander, inflicted a flank attack from the west. The main task was the second company in which Voronin served - to break into the village along the road. Intelligence was not carried out, fire support was limited to a pair of artillery shots, which almost covered our fighters. The BMP-1, which are in service with the battalion, were absolutely unsuitable for military operations in the mountains.
Immediately the whole attack went awry. The gangsters immediately stopped the first company. The soldiers stumbled upon a well-laid ambush. An avalanche of fire fell on the fighters, they fired from behind each boulder, several BMPs were hit. Bloodless company rolled back, entrenched at one of the strategically important heights. The third company was stuck on a mountain ridge and did not participate in the battle at all that day. In the second company left more than half of the personnel.

On the evening of that day, Voronin wrote: “The militants repulsed the attack of our fighters in the village. The federal forces lost six infantry fighting vehicles. Thirty-four people were killed, almost as many injured. Well, at least helicopter pilots covered us, but it’s scary to think that it would be ... "

The press center told reporters that in the battle near Tando, only eight soldiers were killed. Militants that day also got it. The field commander in Tando asked for help from his radio, mentioning heavy losses.

The next day another assault began. After the artillery preparation, the soldiers immediately went on the attack. Tanks fired from behind their backs, covering the assault groups. The fire of the militants was very dense. The guys moved forward with great difficulty, until they were on a site of several tens of square meters. A step from behind the shelter led to an immediate sniper response. There was a proposal to get around the position along the path along the slope. A group of four fighters under the command of Voronin moved forward to eliminate the sniper. Of course, it was a gamble, but under the bullets everything is perceived differently.

Covering each other and moving in rushes, the fighters reached the outskirts of the village. Everyone was confident that the sniper without a cover. As they moved along the wall of the street fence, they found a breach in it, through which they hit the street no more than one meter wide. One side of the street was bounded by a fence, and the other by a wall of a nearby house. Without going a dozen meters, the group was under fire. Two grenades fell to the ground. Immediately orienting themselves in the situation, Voronin and his fighters immediately rushed to the shelter of a nearby barn. After a quick inspection and finding no unauthorized persons, they begin to look for another way out of the building. It was risky to stay long in the shelter, since the gangsters at every minute could rush into the room and, using a numerical advantage, shoot them there. In addition, the motorized infantry still faced the task of finding and, if possible, destroying the enemy firing point. Otherwise, during the further assault, a large number of their friends and colleagues could die.

The 136-I separate light guards motorized rifle Uman-Berlin Red Banner Brigade was formed on December 1 by 1993 in Buynaksk (Republic of Dagestan). She is the bearer of the orders of Kutuzov, Suvorov and Bogdan Khmelnitsky. The brigade was incorporated into the 42 Army Corps located in the North Caucasus Military District. She took an active part in the hostilities in the Chechen Republic from 1995 to 1996. More than 1400 brigade servicemen were awarded orders and medals for participating in counterterrorism operations from 1999. Five officers were honored with the title of Hero of Russia - this is Captain Sergey Voronin, Major Oleg Kryukov, posthumously - Senior Lieutenant of Sappers Vitaly Marienko, Captain Alexey Zhuravlev and Lieutenant Roman Sidorov.

Under the ceiling of one of the rooms of the barn, Sergey found a small window located on the ground level, through which an adult could climb. Then a bold idea comes to his head to get out of the shelter and suddenly hit the sniper from the rear. Voronin understood that the insurgents did not expect such impudence from a handful of federals. He throws the machine behind his back and pulls himself up to the window. And at the same moment he hears the shingles under pressure from the body. Voronin jumps back, takes the machine in his hands. The first turn hit the legs of a gangster. The second finished off him. Returning to the rest of Sergei orders to return. Suddenly, the militants threw several grenades into the shelter at once. In time to see the danger, the soldiers hide behind the nearest stone wall. But the battle was just beginning. Having pushed the automata into the same outlet near the ceiling and the doorway, the gangsters blindly began to conduct dense shelling of the rooms of the house where Voronin’s group had taken refuge. The guys were saved only by the fact that they were well below the level at which the militants fired. As a result, machine-gun bursts only plowed the floor of the house, completely without touching the shelter.

After a five-hour firefight and a number of failed attempts by militants to take the house by storm, Voronin’s group kept the last effort. They are very lucky that the enemy did not have anything solid grenade. However, almost a day has passed since they slept, the soldiers did not drink or eat anything, there was a terrible heat around. In addition, the military arsenal was running out. Feeling depressed morale and severe fatigue of the children, the militants began to use psychological techniques, arguing that the federal troops had already left their positions, leaving them alone here. They offered the fighters to surrender, saving their lives. They offered to give them an officer. None of the motorized riflemen even had an idea to go for such persuasions.

Sergei Voronin said: “I myself decided to break through. But in that situation I decided that I could not order the soldiers to do the same. Everyone chose to take the last fight to him, dying or being taken prisoner, or try to get out of the trap. Everyone decided to go with me. ”

Seeing that the soldiers simply fall down from exhaustion, Voronin decides to make a breakthrough. According to the plan, two remaining grenades, which helped temporarily clear the way, first flew in the direction of the militants, and then, under the cover of smoke bombs, the soldiers made their way to the very breach in the wall through which the guys had entered their temporary shelter. The plan was quite dangerous and each of the fighters clearly understood this, but there was no other way.
The attempt to break through was successful, the detachment returned without loss to the location of its platoon who was still on the same “patch”.

Soon the shelter covered a squall of fire. Tando fired assault rifles, snipers, the calculation of the AGS. It was foolish to renew the assault by exhausted soldiers, and the high command decided to temporarily stop the operation. During the raids, Sergei and his comrades destroyed more than a dozen militants.

Later, Voronin reported to the deputy brigade commander: "The division did not fulfill the task." At this moment General Vladimir Shamanov approached them. He asked the zamkombriga: “Is this the first lieutenant who visited Tando? Submit to the Hero! ” Shaking hands with Sergei, the general left.
“For what, comrade colonel? - asked Voronin. “We have failed.”
“Yes, you're back from hell. And without loss. Do you think this is not enough?

After the next failure, the command decided not to destroy the fighters. The management laid out its last trump card - vacuum bombs. Those who saw the explosion, told about the terrible sight. Above the place where the bomb fell, a large ball appeared from the fire, which turned everything around into ashes. Since then, a myth was born called Tando Syndrome. Its essence is that the "spirits" have become very afraid of single aircraft of the feds, scattering from them in different directions. In the morning of August 23, our troops entered the village without making a single shot.

According to journalist Alexei Babakin: “The picture was terrible. Not a single residential building remained in the village, all buildings were destroyed, the ground was dug by trenches, communication lines and trenches. All sixteen days in the village worked artillery and aviation. Every meter of land is stuffed with shell splinters. Metal detectors could not find explosive objects, because everywhere it was “fonilo”.

The fate of the militants remained unclear. Some witnesses of those events say that the gangsters were killed in the explosion, others - that a significant part of them managed to escape. This is quite possible, since information leaks at that time were flowing from our headquarters.

The events of that August forever changed Dagestan. The village of Tando disappeared from the face of the earth. Residents were later relocated to the New Tando, built with state money. Losses of immigrants were also reimbursed by the state. However, local talk about numerous violations that occurred in the payment of compensation.

23 March 2000, according to the Decree of the President of the Russian Federation, for the heroism and courage shown during the operation in Dagestan, Sergey Voronin, who was already the guard captain, was awarded the title Hero of Russia. Currently, Lieutenant Colonel Voronin, who graduated from the General Military Academy of the Armed Forces of the Russian Federation at 2005, continues to serve in the ranks of the Russian Army and holds the position of senior staff officer in the Volga-Urals Military District. His family lives in the city of Yekaterinburg.