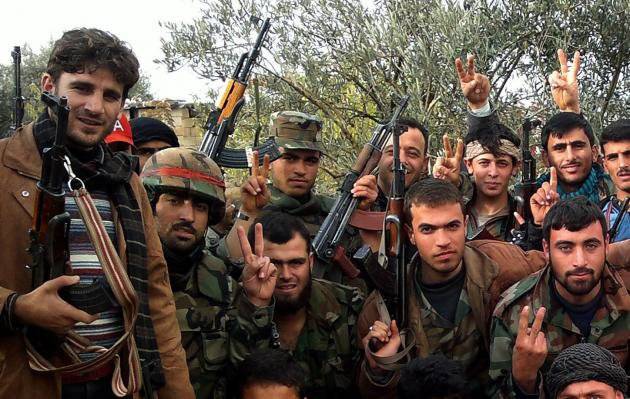 The victory of the Red Army at Stalingrad was a signal for the countries of Latin America. The leading states of the region began to establish, and in some cases to restore diplomatic relations with Russia. The initiative came from Latin Americans. Despite the difficulties of wartime, in 1943-1946. USSR embassies were opened in Mexico, Cuba, Venezuela, Colombia, Brazil, Uruguay, Chile and Argentina. President Roosevelt was loyal to the appearance of Soviet missions on the continent. In May 1943 I.V. Stalin dissolved the Comintern, demonstrating to the allies that the new historical conditions, this organization will not be used as a channel for "exporting revolution".

However, even before Churchill's Fulton speech, delivered by 5 in March 1946, the United States foreign policy became inevitable and threatening to slide onto the rails of the Cold War with Russia. Gradually, the formulas used by the propaganda of the United States to expose totalitarianism of Nazi Germany began to be transferred to the USSR. He was accused of splitting Europe, of building an “iron curtain”, of carrying out secret expansion plans. The strategy of countering the Soviet Union was formulated firmly by Washington and London: “Russians respect only strength”, therefore, it is possible to find mutual understanding with Russia only “on the basis of the military strength of the English-speaking commonwealth”. That is, from the position of ultimatums, the arms race, the unilateral possession of atomic weapons as the main argument for "curbing" Moscow. “Information leaks” confirmed: plans for atomic bombing of targets in Russia exist. Dozens of cities to be destroyed by the example of Hiroshima and Nagasaki.

Moscow understood that the confrontational policy of President Harry Truman was aimed at restricting the Soviet presence in various parts of the world, and above all in the Western Hemisphere. In an effort to get rid of "Soviet observers" in Latin America, the United States launched such a powerful propaganda campaign "to expose the subversive activities of the Soviets" on the continent, that it surpassed all that was done in the field of propaganda during the years of the struggle against Hitler Germany. The countries south of the Rio Grande — the “backyard of the United States” —would have been completely cleared of Soviet embassies, trade missions, and cultural centers! To solve this problem, they sent American diplomats, FBI employees who were engaged in intelligence work in Latin America during the war, and created by the CIA in 1947.

The Soviet Embassy in Santiago de Chile was shelled in the early morning hours of October 10 1947. The fire was fired from a car through the windows of the 2-th floor. Eleven bullets from the Thompson submachine gun were found in the walls. Several holes received the emblem of the Soviet Union over the main entrance. The right-wing pro-American press gloated: "This is a reaction to attempts to turn Chile into a subversive outpost of the USSR on the continent." A week later, at the opening of the traditional agricultural exhibition, a group of latifundists organized a demonstration under the slogans “No to Communism”, “Down with Ambassador Zhukov”, “Down with Russia”. The Soviet representatives were forced to leave the exhibition, accompanied by the Director of Protocol of the Ministry of Foreign Affairs of Chile and the police. A telegram about the situation around the embassy was sent to Moscow: "Rumors about the intention of the government of Gabriel Videla in the near future to sever diplomatic relations with the Soviet Union are circulating more actively." Soon, Ambassador Zhukov was summoned to the Ministry of Foreign Affairs of Chile, and he was handed the appropriate note. Diplomats were given three days to wind up. The Soviet Embassy in this country existed 1 year 5 months and 25 days.

A day later, on October 11, the apartment of the Secretary of the USSR Embassy in Mexico Ivan Kumaryan was shelled at the apartment of the 3. He himself was on a business trip, and his wife and two children witnessed the attack. They just went down to the first floor, to the dining room, and shelling was carried out on the bedroom window. The diplomat's wife managed to see how two men ran along the fence with revolvers in their hands. In December, the 17 of the second, the attack was repeated. Kumarian and his wife were at this time at a diplomatic reception, the children were at home. I had to quickly move to the embassy. Ambassador Alexander Kapustin received instructions from Moscow to make an “oral presentation” of the Mexican Foreign Ministry and to demand an investigation into the incidents. The ambassador was recommended to agree with the Mexicans that the information about the shelling should not become the property of the press: Moscow did not want too much propaganda hype, knowing full well who is seeking it. A representative of the Directorate of the Secret Police, who was investigating the “state of emergency”, shared his thoughts with Kumaryan: “In this case, political motives are visible. If they wanted to kill you, they would have lurched when you return home from the service, and would shoot at you, not at the windows. These people wanted to cause a scandal, and these were, I suspect, not Mexicans. ” When asked who he suspects, the investigator answered in English: "I don't know."

The Soviet mission in Havana was fired on 20 on April 1948. At least a dozen shots were fired from a passing car through the building. Two bullets hit the envoy’s apartment, one into the wall of the reception hall. There were no casualties: the staff were on political information. The head of the police station appeared in the mission half an hour after the shelling. He stated that he would conduct an investigation, but did not promise quick results. According to the information received from the friends of the mission in the police, the attack was organized by the “Union of veterans of the World War 2”, which was “under maintenance” of the US Embassy. New provocations against the mission were marked by 16 and 21 in August. The method is the same: shelling from a car. Marked mainly in the window. As it turned out, the August attacks were organized by the Anti-Communist League, created by Cuba’s former deputy police chief, Dias Verson. A few days before the shelling, he met with a representative of American intelligence on McNamara Island. The last provocation against the mission was carried out on 10 on April 1951. On the balcony of the main building from the street they threw a bomb that did not work because of the poor-quality fuse. The police defused the "hellish car." The white émigré Andrei Golovchenko was suspected in this attack, who in 1947 was declared the head of the “Russian government in exile”. Announced on the initiative of the Society of Friends of the United States.

The dictator F. Batista, who seized power in a coup d'état on the night of 9 on 10 in March of 1952, immediately declared that he would make every effort to "suppress communist penetration" in Cuba. On March 21, police agents staged a provocation at the airport, trying to detain two Soviet diplomats and, contrary to international law, to inspect their luggage. Soviet couriers opposed this and returned to Mexico. The diplomatic mail did not enter the mission, and its activity was in fact blocked. The Batista government has not given an explanation of the reasons for the cruel treatment of the Soviet couriers. On April 2, the representative of the Soviet mission in Havana presented a note to the Cuban Foreign Minister about the break of diplomatic relations. In an interview with American journalists, Batista said: "I broke off relations with Russia, as you - in the USA - wanted it."

The provocations organized by the CIA officers through agents in the police forces eventually led to a breakdown in relations with the Soviet Union of Brazil (1947), Colombia (1948) and Venezuela (1952). The pressure of Washington was able to resist Mexico, Uruguay and Argentina. The first two countries already broke off relations with Soviet Russia in 1930 and 1934 respectively. To resort again to such a radical method of terminating relations would be an obvious search. In Argentina, the US ambassador repeatedly tried to persuade Juan Peron to "get rid of the Soviet representation." The president did away with these attempts simply: he publicly suggested that the Americans be the first to set an example and close the USSR Embassy in Washington. Such words by Peron are often quoted: “We will not carry chestnuts out of the fire for anyone.”

Alexander Sizonenko, a well-known expert on Russian-Latin American relations, rightly noted that “in the context of the Cold War and the attempts of the Western powers to isolate and weaken the USSR, the Soviet leadership was looking for ways to rectify the situation and improve its relations with various countries”. The meeting of I.Stalin with the ambassador of Argentina L. Bravo 7 in February 1953 of the year became in many respects significant. A.Sizonenko correctly interpreted the position of the Soviet leader: “Stalin was looking for opportunities not only to expand and intensify relations with Argentina itself, whose president H. Peron often then criticized the American course, but also tried to break the cold war chains through this country. least in Latin America. " (1)

Contrary to the special operations of the FBI and the CIA on the continent - I will add myself. One should not think that the United States in the new historical conditions, having won the Cold War, favorably treat the growth of activity in the Latin American continent of Russian diplomacy and Russian entrepreneurs. The US intelligence agencies are keeping under vigilant control all aspects of this activity. And if necessary, they use their wealth of experience of provocations, sabotage and propaganda manipulations to compromise the “return of Russia to Latin America” declared several years ago ...