New army will not be 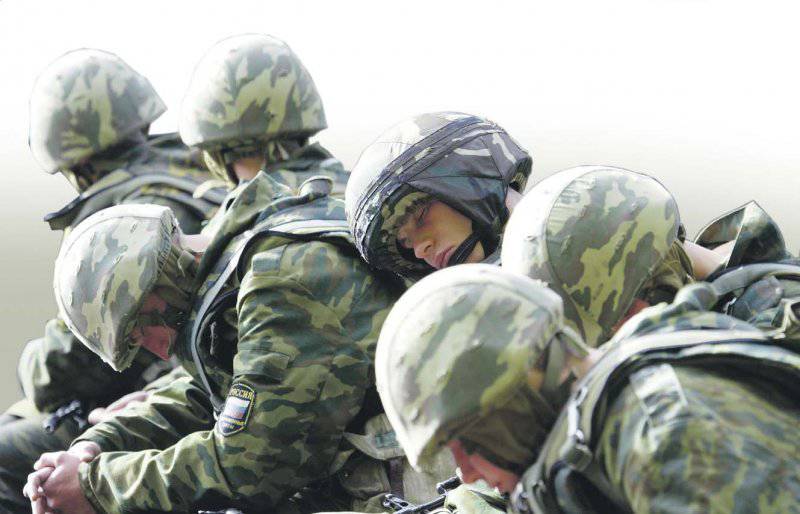 The military reform, which was carried out by former Defense Minister Anatoly Serdyukov, will definitely not be continued after the appointment of Sergey Shoigu to his place. This conclusion was made on Wednesday by the participants of the meeting of the Moscow Political Club "Rosbalt".

True, the experts dispersed in determining the reasons for the completion of the reform of the army in its current form. Some believe that it is impossible to continue something that did not have a specific goal, while others believe that the goal was just there, but under current conditions the authorities will no longer be able to achieve it for political reasons.

Reform Serdyukov can be divided into two areas. Modernization of weapons and a fundamentally new structural organization of the Russian army. According to military expert Alexander Golts, the main challenge that Serdyukov faced was the need to "resolve the issue of the manning principles" of the Armed Forces of the Russian Federation. Namely - to abandon the concept of mass mobilization.

The analyst sees the sources of this decision in the statements of Vladimir Putin since the beginning of the second Chechen war, when for a military operation it was not possible to form a combat-ready and fully equipped compound of only 60 thousand people, with the total formal strength of the army then more than 2 million people.

In addition, according to Alexander Golts, the previous head of the Ministry of Defense had the idea that until about 2025, the army should be ready, first of all, to conduct local conflicts, the standard and example of which was the war in South Ossetia in 2008. Russia’s full-scale continental conflict involving conventional weapons, due to the “demographic hole”, simply lacks human resources.

The consequence of this was the "brigadier" principle in reforming the army, because to solve the problem, the choice should be made between returning to a general military call for two or three years or a gradual long-term transformation towards a contract army.

“Brigadier contract” is tracing from the US Army, ”Anatoly Lokot, deputy head of the Communist Party faction in the State Duma, member of the commission for the legal support of the development of organizations of the defense industry complex of the Russian Federation, agrees. According to him, the United States has been 200 they did not wage global continental wars, using their army in local conflicts. For Russia, such copying, with its historical experience and extended land borders, was very dangerous.

Not to mention the fact that the "reformedness of the reform," says Lokot, is clearly "in question." After all, the most efficient units were often disbanded.

At the same time, on the second key issue related to how weapons will be modernized in the future, and therefore the Ministry of Defense will develop relations with the Russian defense industry, experts generally agreed that the conflict that took place during Serdyukov was clearly will end.

True, the reasons for this they see different.

One of the key reasons is political, Alexander Golts believes. “Vladimir Vladimirovich Putin’s nuclear electorate works precisely at these plants, in these single-industry towns,” he explains the reason for the sudden emergence of interest in power in the Russian defense industry, which had not been very popular with Minister Anatoly Serdyukov before.

Moreover, his irritation was understandable, the expert notes, because Serdyukov needed a modern weapon at a competitive price, and the defense line inherited by Russia from the USSR could not produce it.

After the collapse of the Soviet Union, conditionally "civilian" plants ceased production of those components that they previously manufactured, which could be up to 80% of the necessary parts. As a result, receiving a large order, the defense enterprises for a long time were forced to stop assembly and begin production of components, which made the resulting products "golden."

For social and political reasons, today this problem has suddenly ceased to interest the Russian leadership. So it’s hardly worth expecting that Sergei Shoigu will continue the fight with the MIC enterprises started by Serdyukov for the best price-quality ratio.

“Shoigu is experienced enough to distinguish between half-tones and hints,” and he probably understood that you shouldn’t get involved in this business. It is not necessary to buy from the "defense industry" exactly what the army needs. Rather, we must agree on what they can actually produce, "Golts notes.

In turn, Anatoly Lokot is convinced that the problem was that, under Anatoly Serdyukov, the army turned into a WLLF - Russian Military Joint-Stock Company, and instead of competing on tactical and technical characteristics, the choice was made on the basis of product prices.

For this, "the customer must have a headache, how will the weapon be made." So, if the Ministry of Defense, headed by Sergei Shoigu, is able to create a system of full-fledged quality control of military products, together with the system of joint responsibility of the ministry and manufacturers, in the future this will solve the problem of saturating the army with modern, high-quality and competitive weapons.

The only question is whether the new minister has enough political will and authority to avoid the problems that led to the resignation of his predecessor. And the answer to this question will not be clear until next year, when the time comes to implement the state defense order for 2013 year, scandalously failed in the previous two or three years.