November 14, 2012
41
The ringing Grozny morning on December 31 was blown up by the roar of hundreds of motors. In several directions, armored columns of federal troops rushed towards the Chechen capital. The technique was menacing and beautifully beautiful. In one of the BMP-2 at number 639, our fellow countryman from Saransk Maxim Trifonov. BMP Commander Junior Sergeant Trifonov served in the infamous 81st Motor Rifle Regiment in the 90th tank divisions of the Volga Military District.

Their regiment arrived under the Chechen capital in mid-December. When the unit approached the city, the Chechens got in touch. They told the Russians to get out. On the morning of December 30, the machine commanders summoned the company commander and said: “Tomorrow we will be moving to Grozny”. We started training and decided to check the weapons. The equipment was expelled into the field and shot out from it in the nearby forest plantations. Maxim's car jammed gun. The equipment in the regiment was, in principle, not old, it was driven from Germany, but some of the vehicles were faulty and they were being repaired literally on the move: just before loading, trucks with spare parts arrived right up to the train - the on-site specialists changed the faulty units. By car Maxim twice removed the fuel heater. There is also this fault - the gun.

Issued 500 ammunition shells on each machine. Additional ammunition placed on the roof of the troop compartment behind the tower. The equipment was lined up and the crews were ordered to sleep in cars. The night was calm, without shooting, but no one slept. But Maxim wasn’t at all dreaming - he was putting a gun in order with a whole two officers the whole night. They took a long time, but by the morning they repaired ... In the hours before entering Grozny there was no fear: the New Year was on the nose - the holiday, after all, was in a good mood. No one knew what awaits them in the Chechen capital then ...

The regiment of Maxim Trifonov on the morning of December 31 entered the city as part of the first echelon. Now they say that the command did not set any tasks for the regiment. Say, just took it and drove into the city. But Maxim specifies that the first battalion in the third company, which owned his car, was ordered to immediately take the Severny airport and get off to the railway station. And then go to the presidential palace.

The column hit the road. Three T-80 battalions of the 6-Tank Regiment of their division were assigned to each company. There were no militants in the empty airport. The battalion went through the quarters of the private sector of the Chechen capital. The BMP is designed for 10 people, but in the cars there was only a 5 team - the crew itself and two arrows. Maxim treated his combat vehicle in two ways. On the one hand, he liked her for good maneuverability, on the other hand, the soldiers deciphered the BMP abbreviation as “the mass grave of infantry”. Indeed, the car has light bulletproof armor that cannot even withstand the bullets of a large-caliber machine gun, a line of which could pierce the body of the BMP through and turn the car into a flaming torch. In addition, the powerful and quick-fire 30-mm gun had an unreliable fire control system, which also had difficulties. 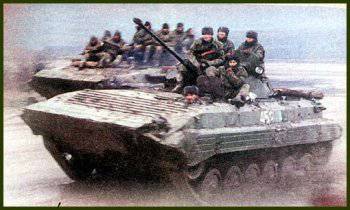 BMP-2 - the main means of support for infantry in combat. A completely successful car turned out to be unsuitable for conducting war in urban environments.

The column moved through the city, everything was calm and nothing foreshadowed trouble. The locals walked along the streets. Maxim remembered a woman with a big bag, in which, probably, there were products for celebrating the New Year. With their column was the technique 131-th Maikop brigade. Movement speed was average, 35 kilometers. When they arrived at high-rise buildings, the militants began shooting at them. One of the tanks began to smoke. The crew quickly left the padded car. Russian troops fired grenade launchers and automatic weapons. It threw the commotion into motion. Part of the machines began to unfold, the Maikop brigade began to wedge into the column of the 81 regiment. The voice of the company officer sounded in the headphones: “Turn around and go through a dangerous section at a higher speed”. Two hundred meters from the station at the turn of the column was again hit by grenade launchers, they were supported by machine guns and snipers. Chechens managed to burn two BMP. Their crews managed to escape. To cover the dangerous area, there were three more infantry fighting vehicles left here, one of which was Maxim, a communications vehicle, a pair of tanks and the Tunguska anti-aircraft installation. The crews, leaving the BMP, occupied the nearby empty polyclinic building. Chechens did not stop shelling. Another BMP flared up again. Our war was peculiar. Being in the building of the clinic, they spotted the firing point of the Chechens. Then the crew returned to the car and, without starting the engine, turned the turret around and sent a portion of shells to where the militants fired. Two tanks also hit Dudayevites every now and then. The tankers also had their own tactics: one tank stood, the other continuously maneuvered. Then they changed, constantly covering each other. "Tunguska" in the battle did not participate, the militants managed to damage it. Incessant shooting lasted for many hours. At times it was very hot, the commanders asked for reinforcements and they were told: "Hold on, we are here in shit too." Over time, of all the technology remained only a connected machine, the rest of the BMP burned. Tankers left somewhere. But despite the fierce shelling, none of the clinics occupying the defenses in the building, which is two dozen people, died. Wounded, however, were. Having lost the technique, the group decided to go to their station. In the fever of the battle, they did not notice how the New Year arrived, an alarming silence hung, the skirmish stopped, the lull continued for about twenty minutes. At one o'clock in the morning, the wounded were loaded onto the surviving car and she went to the station. The survivors rushed after her. They arrived quickly, a hospital was deployed in the station building, where they received injuries and tried to help. I remember forever: our dead soldiers, about five people, lay on white snow.

The second sleepless night made itself felt and came to the station, Maxim was forgotten in an anxious dream. In the morning, the soldiers of the 81 regiment and Maikop brigade began to lay the windows of the station building with sandbags. At about ten o'clock the shelling began again, which lasted all day. The team did not want to miss the paratroopers, so that they cleaned the factory buildings, from where there was heavy fire. Our ordered in this direction not to shoot, so as not to hurt their own. After some time, the order was canceled. From 60, only 14 returned from the paratroopers who left to clean.

The commanders remembered the military equipment left at the station square. They collected the driver and sent them under the cover of automatic fire to take the car to a safe place. The first to wound up the T-72 tank of the Maikop brigade: the engine started, a cloud of black smoke splashed out of the exhaust pipe, and almost immediately a rocket-propelled grenade hit the tank. T-72 fired up. The driver turned off the engine and came back. An attempt to start a T-80 was also unsuccessful. This tank, too, almost immediately shot down, the truth is where with more severe consequences. The T-80 detonated ammunition. A tank tower weighing 6 tons of explosives tilted about fifteen meters. The beauty and pride of the domestic tank building has become a smoking pile of scrap metal. The driver and this time managed to leave the tank in time. Could withdraw only three BMP. True, one of them was hit on the way. The two survivors took refuge near the building clinics. The remaining tanks and armored vehicles remaining at the station, and these are several dozen pieces, were finally destroyed by the militants. 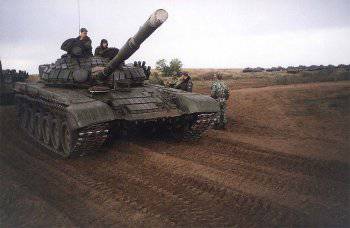 The main battle tanks T-80BV and T-72B are the main workhorses of the Chechen war.

Heavy bloody battle at the station building did not stop. Chechens incessantly attacked. Our, as they could, fired back. The number of the killed grew. At first they were carried out into the street, and soon more than a dozen corpses were already lying there. But then the shelling became so dense that it became life-threatening to carry the dead into the streets. And their bodies were piled inside the station building. Some of the defenders began to lose their nerves: one lieutenant in a deranged state ran out into the street, the militants shot him almost immediately. The medical officer became hysterical: "We will not get out of here, we must go and surrender." Seeing that his words did not find support, the doctor calmed down, taking himself in hand. But on the whole, the guys did well, although the nervous tension was hellish, and besides, militants were constantly connected to the radio network and offered captivity. Maxim said that no one wanted to surrender to the Chechens, although of course there were such cases in other units.

On January 2, part of the defenders decided to withdraw from the station. They remembered the two surviving BMP. One of the officers said that he had hidden a T-72 tank nearby, driving him into the house. It was on this technique that it was decided to get out of the environment. The first thing they began to evacuate the wounded. They were carried in the arms to the clinic, where the BMP stood. A 42 man was put on the first car, the second BMP was unlucky - the Chechens succeeded in smashing it. The tank also put the wounded. This “seventy-doubles” managed to get out of the city, but the Chechens shot the fighting vehicle with 42 wounded and most of them died. Maxim was in a group of 30 people who were walking out of town. They were lucky, got out without a loss, although they were fired. We went to the pass and came across a tank with the wounded.

Because of the steepness of the lift, the tank had to be thrown. They wanted to blow up, but changed their mind, the driver disabled all electrical wiring. The patrol leading in front of the main group came across three infantry fighting vehicles of the Russian troops. Seriously wounded were taken to the hospital, and the rest of the trucks arrived. A week lived in part of the internal troops. Then left for Mozdok.

They received new equipment there and returned to Grozny again ...

Having returned from Chechnya, Maxim and his fellow soldiers seemed to be out of work. The state, in the name of the territorial integrity of which they shed blood, essentially forgot about them.