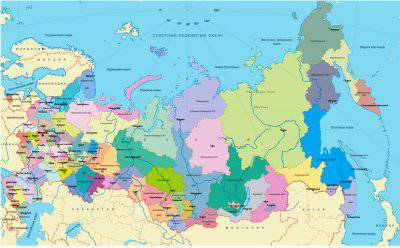 Globalization is not a consolidation process. This is the master of the world summarizing the features under the new world order. The idealist Fukuyama announced in 1992 that “the end of stories”, And the Americans piously believed that with the collapse of the USSR, the cold war was over, and the host hegemon on the planet was left alone.

And the European Union, you say? Firstly, it is not far from the split, and secondly, if anyone keeps it, it is Germany. And in return, donating a part of her budget, she extorts political privileges from herself, do not even hesitate. It may well be that the EU will have a German president. But this is so, by the way about the hegemon.

All over the world there is a “parade of sovereignties” now. If Boris Nikolayevich were alive, he would have laughed and said: in the West, the West took me and the comrades of Kravchuk and Shushkevich.

In Quebec, the September 4 election was won by separatists from Parti Quebecoisadvocating secession of a province from Canada. In the past, the party held a referendum on separation issues twice: in 1980 and 1995. On the first plebiscite, 59,6% voted against the secession of Quebec, and on the second - 50,6%. However, today the victory of the separatists does not mean that the population of Quebec is actively and fully supported the separation of the province from Canada. According to the recent public opinion pollOnly 28% of Quebec men supports the idea of ​​province independence. Nevertheless, the victory of the separatist party says a lot.

In 2014 year a referendum will be held on the independence of Scotland. Only one question will be put to the vote: “Do you want complete independence?” Moreover, British Prime Minister David Cameron and First Minister of Scotland Alex Salmond signed an agreement allowing all Scottish people older than 16 to vote. But adolescent Scots are considered the main supporters of sovereignty.

Even Texas, and that rages. Other radicals there count them.that a civil war for the separation of this privileged state is inevitable. For example, Tom Head, a judge and chief district administrator from Lubbock County, publicly, through the press, warned Obama about a possible civil war - if he was re-elected. Now this judge is convincing the deputies that a civil war is inevitable, and it will immediately follow Obama's re-election. Therefore, it is necessary to prepare for the “worst”, that is, “civil unrest, civil disobedience” and even, probably, “war”. Judge Tom Head and Commissioner Mark Heinrich believe that a riot of disgruntled Obama Texans will be suppressed by the UN peacekeeper. But this Mr. is not going to let the military into his home state and Lubbock County: "... So, I will stand in front of their armored personnel carrier and say:" Boy, you have nothing to do here. "

All this, of course, is connected with the pre-election situation. However, Texas is not the only state special according to its political status, but also populated by very hot people. They love not only shootbut also to look at the death penalty subject to even weak-minded. By the way, both Bush are from Texas.

In addition to the United States, Canada, Britain and China, the “parade of sovereignties” can also affect smaller states - for example, Spain. They have long dreamed of finding independence for Catalonia and the Basque Country. In the recent elections, the nationalists again won the last election. Most votes received Basque Nationalist Party.

In Belgium, the Flemish nationalists, after winning local elections in Flanders, issued an ultimatum to the government. They demanded turning the country into a confederation. On October 14, Bart de Wever, the leader of the New Flemish Alliance Party, stated this directly. He received the 38% of votes in Antwerp and actually took control of the country's second largest economic center. He said that the party "became the largest party in Flanders after the Second World War," which "received a vote of confidence from the Flemish to overcome the economic and political crisis." The Flemish politician stressed that with French-speaking Wallonia as part of Belgium, he was not on the path: "We have two cultures and two democracies ... Our nationalism is not a goal, but a means of moving towards our own democracy in Flanders."

Does it make sense to remind of Yugoslavia - or rather, about what it has turned into and continues to turn into, despite the fact that Wahhabi Islamism is becoming stronger in the Balkans? Less remember the "velvet divorce" of Czechoslovakiadivided by 1 January 1993 for the Czech Republic and Slovakia. Probably because this divorce is peaceful, although the majority of Czechs and Slovaks spoke against him. (The latter means nothing; in the USSR, the people in the corresponding referendum also spoke in favor of the Union).

But there is still two Sudan, Livia with her Cyrenaica, finally, the probability of the appearance on the world map of Kurdistan... There is no peace and smell. The split of Syria into religious enclaves of Kurds, Druze, Shiites and Sunnis is one of the immediate tasks of the USA.

And more and more often in the world there are voices of separatists who consider the “parade of sovereignties” a panacea for the financial crisis. Separatists increasingly come to power if the democratic election system allows them. One thing is authoritarian China, brutally cracking down on the Uighurs and limiting their religious departure, another thing - Europe or the United States.

Before we get to Russia, let's say a few words about federalism and its opponents. The federal structure implies equal rights of subjects in the state. There are almost more opponents of a federal structure that guarantees the subjects a certain legal and political independence than supporters. A federation does not necessarily mean a strong state.

Extremely indicative An example of Indonesia, a country with a population of 190 million people, whose length - almost 5 thousands of kilometers. The complexity of management here is that its territory is divided into 13.500 islands, and the culture is extremely heterogeneous. Freed from the Netherlands, the Indonesian rulers decided to introduce a federal structure here - and so what? The strongest internal conflicts, culminating in a massacre by the Kalimantan Dayak, almost ruined the country. As a result, it became clear to the state leaders: endowing Kalimantan with autonomy would lead to its subsequent separation from Indonesia. True opponents of federalism triumphed.

All this can be both true and wrong.

Unitary states can also break up. The growth of expenditures on the bureaucratic apparatus is unrealistic to predict, since the "vertical of power" is not at all an example of the principle of federalism, as is often believed. Federalism is just a “horizontal” where the central government and republican governments solve various tasks that should not be duplicated.

The problem of poor regions can quite successfully be solved precisely under federalism. However, from the excesses and distortions here no one is immune. For example, the financing of Chechnya’s expenses from the federal budget of Russia comes to 90%. It is not surprising that many are indignant at such subsidies.

As for the specific princes, separatism and neo-feudalism, these evils can really manifest themselves with a new, powerful force - one has only to talk about “independence”, “renewal”, “rebirth” - in general, about what he started in his time to repeat on television Comrade Gorbachev, a famous peacemaker, in which the nationalists in the USSR cheered up. For the "rebirth" usually immediately follows the party thesis of "independence." A good example of the troubled time of reorganization is the Lithuanian SSR. The local Sajudis movement initially called for perestroika and glasnost, and then, in the elections of 1990, advocated the secession of Lithuania from the Soviet Union. 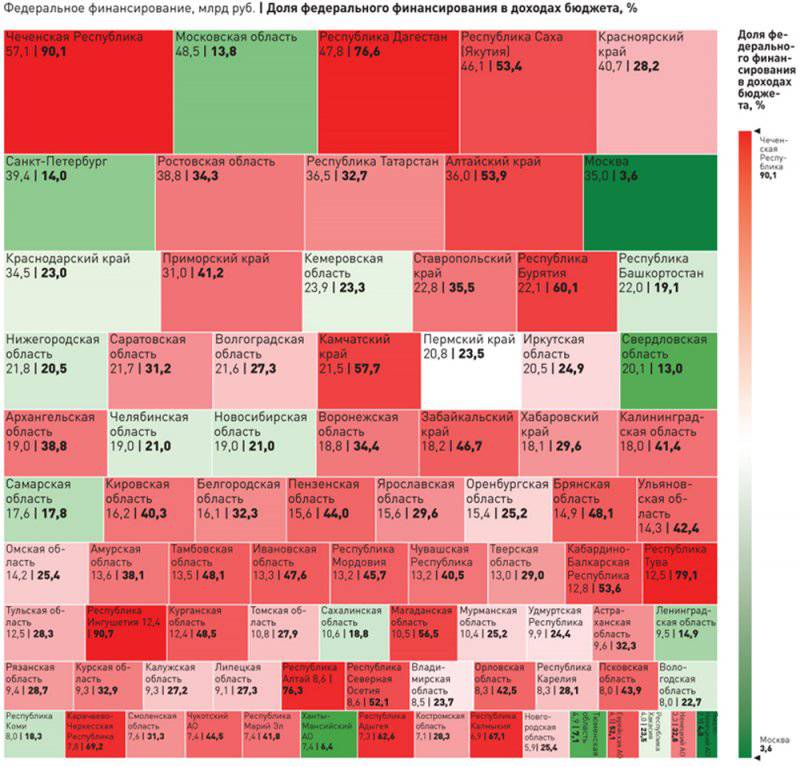 But the USSR is long gone; geographically, the problem has become "smaller". Now they are arguing about how bad federalism is in Russia: after all, Wahhabis do not cease to wage an underground war in the Caucasus, incidents with Islamists began to occur in Tatarstan. According to open statistics, which can be obtained on the Internet, from the regions where Islamist militants and Muslims in general are radical, the Russian population is leaving (it should also be noted that the second reason for the decline of Russians in problem regions is the low birth rate). If in the 2002 year of the Russians in Chechnya there were 3,7% of the population, then in 2010 only 1,9% remained. In Kabardino-Balkaria, in 1989, the Russians were 31,9%, in 2002 - 25,1%, in 2010 - 22,5%. In Ingushetia, only 2010% remained for the 0,8 year of the Russians: most of them fled from there because of the Chechen conflict, migrants from Chechnya and North Ossetia settled there instead. In Dagestan, Russians made 1979% in 11,64, 1989% in 9,21, only 2002% in 4,69, and 2010% in 3,60.

However, it is believed that with time separatism - in all the republics of Russia - will prove to be the force that will destroy the state. The reason for the possible collapse of Russia will be just the federal principle. The “parade of sovereignties” is what is possible with a certain independence of equal subjects. Do not be a federation, firmly subordinate all regions to the center, get rid of the republics and completely totalize all protests (probably, just like the Chinese central government weapons pacifies the Uygur), there would be no national or religious problem. Any “rebirth” would be extinguished in its very germ.

Opponents of federalism offer tough options for a political solution: for Russia to continue to move along the path to greatness, it needs to cut the rights of the republics as much as possible, or to completely abolish national-state formations erroneously nurtured since the times of the USSR. Otherwise, the country is awaited by what has already been said above: the rule of princelings in the republics, neo-feudalism (yes, there “neo” is the most ordinary, medieval, with heavy slave labor, as practiced in Chechnya) and the aspirations of the republics either for independence or to the "correct" redistribution of the federal budget.

We will not summarize, let alone impose our own opinion, but will offer to answer questions from readers. Please participate in the survey and select one of the suggested answers. Thank.