The ninth package of sanctions, unexpectedly easily agreed upon and promptly put into action by European politicians, was, as you know, clearly tied in time to the oil price ceiling. However, the expected effect of such synchronicity will definitely not be. And not only because prices have not fallen from the ceiling.

The package itself, since we really wanted to move it from the negotiation stage into reality, turned out to be not only short in essence, but also overly deliberate in terms of targeting. For almost everyone whom the European Commissioners were so eager to offend, the 9th package is like a dead poultice.

The sanctions lists of the ninth package include 200 people and organizations, including three deputy prime ministers and nine ministers at once. There have never been so many, not to mention governors and deputies. Soon, it seems, there will be no one left behind the brackets.

They even gave quite specific explanations about the vice-premiers in the EU. So, Victoria Abramchenko is already to blame for the fact that "carried out control over attempts to redirect grain from Ukraine without the consent of Ukraine". But Tatyana Golikova, according to the EU, and in fact “approved the decisions of the Russian government on mobilization.”

There are very big doubts that T. Golikova will refuse responsibility "for the introduction of the Russian education system in new territories." But hitting on Alexei Overchuk, “responsible for providing budgetary support to Belarus,” actually seems like a serious stretch.

So it won't take long to push the Belarusian allies into direct confrontation with the EU and the Kyiv regime, which Minsk still manages to avoid. But, in principle, package No. 9 at least contains logic regarding the officers of the Main Computing Center of the Armed Forces and the developers and manufacturers of combat systems.

What everyone else is guilty of is known only in the EU, where they are literally eager to somehow support the Russian fifth column, but they find it all somewhere else. Artists, columnists, bloggers and pop "star dust" - but among these, who are not really needed abroad, everyone who wanted to, it seems, has already departed along the route: suitcase - Moscow - railway station - abroad.

European journalists have already noticed that the naive expectation that the defendants have real estate or some assets that can be blocked did not materialize. It seems that in the West they were judged according to their own, or rather, according to our Russian renegades, who, with the beginning of the SVO, literally rushed abroad to save the goods acquired by overwork.

As it turned out, the new Russian victims of the sanctions do not own any banks or financial structures. If there are shares or blocks of shares somewhere, then, as a rule, in structures that are far from the sphere of sanctions. In the best possible scenario for the sanctioners, someone could have something offshore.

In this case, something to bite, it seems, could even work out. But so far, nothing has been heard from anyone. And this is not at all surprising. Pay attention, even in the Moscow representation of the EU, which, oddly enough, is still functioning properly, pouring mud on our government and the whole country, they recognized the severely limited nature of the ninth package.

This means that the sanctions have been “calibrated”, a word they have chosen, in such a way as to minimize the negative consequences for the Russian population. Truly touching concern for you and me. The main thing is to make it difficult for Russia to produce a new weapons and renovation of the old. You might think that the same "population" does not work at defense enterprises.

Most likely, the EU understands quite well that the representative of the Russian Foreign Ministry, Maria Zakharova, is absolutely right when she says that

"The package of EU sanctions will cause socio-economic problems in the EU itself."

But to admit it openly is to sign something like capitulation in the economic war. And there after all and until real quite close.

Finance has long sung all the romances

Recall that since December 16, a number of Russian media outlets have been sanctioned, including the All-Russian State Television and Radio Broadcasting Company, the National Media Group and the RT television channel. Almost on the same list with them are the political parties of the Communist Party of the Russian Federation, "A Just Russia - Patriots - For Truth", the Liberal Democratic Party, "New People", "United Russia". To frighten all this public is a hopeless business.

The defense industry was also under attack from the EU - Tochmash Design Bureau, Ural Automobile Plant, Votkinsk Plant and Kazan Optical and Mechanical Plant, Shvabe Optical Holding. And also only two banks - the Moscow Credit Bank (MKB) and the Far East Bank. All the rest who could be punished, and even those who could not, as you will affect the population, have long been on all lists. However, they continue to work stubbornly.

These banks, by the way, were given a reprieve until the summer to close correspondent relationships and transactions. They are still allowed to participate in the financing and servicing of international trade in fertilizers and agricultural commodities. Other Russian banks, however, too.

Under milder sanctions in a special list - without freezing assets, was the All-Russian Bank for Regional Development (RRDB). This is an old list, which already contains Rosneft, the owner of almost all the shares of this bank. 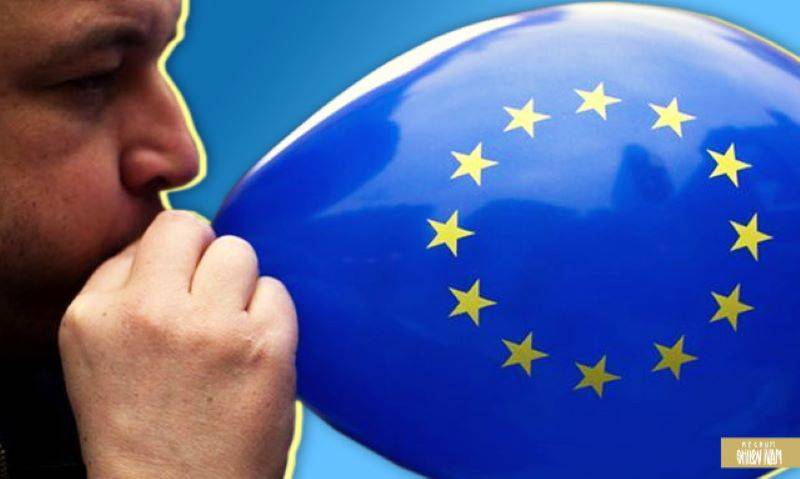 The European Commissioners were clearly in a hurry to ban new investments and even loans in the Russian energy and mining sectors. In such a hurry that they immediately introduced a whole set of exceptions for "certain critical raw materials."

In general, you can’t go anywhere, but if you really want to, then you can. Can be into the mining and production of bauxite and aluminum, chromium, cobalt, copper, iron ore, mineral fertilizers (including phosphate rock and potassium), molybdenum, nickel, palladium, rhodium, scandium, titanium, vanadium and rare earth elements.

Wow list, isn't it? And it is not at all surprising that, while preparing its ninth sanctions package, the European Union gave Russia some indulgences. Thus, Russian titanium, aluminum, copper, nickel, palladium and iron ore are excluded from import and transport sanctions.

What is this, if not an admission of mistakes, and a statement of fear of the coming large-scale crisis in the most advanced industries due to the cessation of supplies of Russian raw materials. Strategic in most cases, mind you.

However, sub-sectors such as the extraction of lead, zinc, tungsten, gold, silver, diamonds and other precious stones fell under the ban on new European investment. The supply of construction materials is now also under sanctions, which could undermine a powerful construction boom in Russia.

Maybe, but it is unlikely to undermine, since those who want to replace the Europeans, without losing too much in the level of technology, literally line up. Needless to say, a lot was also banned in the eight previous packages, including investments in Russian oil, gas and coal production.

And what is the result? Nothing more than zilch, in comparison with which even the price ceiling looks like a very serious measure. The effect of it, however, if it will be, is very, very delayed.