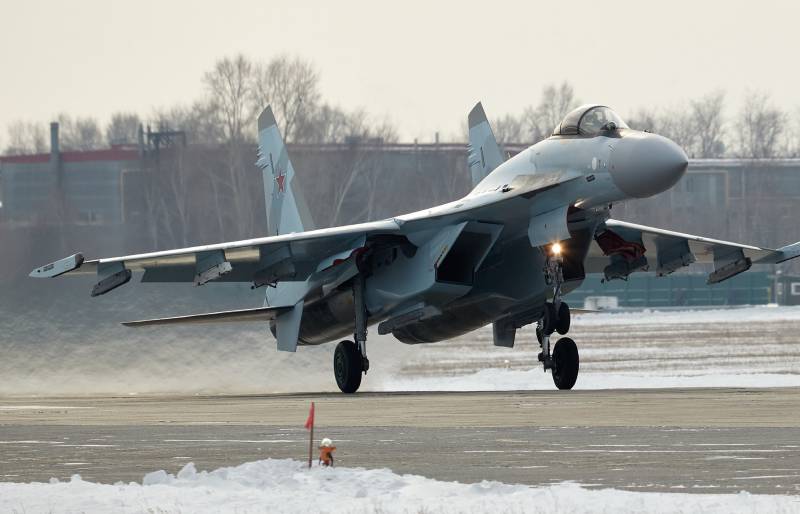 Russian Aerospace Forces replenished with new aircraft, Komsomolsky-on-Amur handed over a batch of Su-35S multifunctional fighters to the military aviation plant them. Yu.A. Gagarin. This was reported by the press service of the United Aircraft Corporation (UAC).


A batch of Su-35S fighters entered service with the Russian Aerospace Forces, the aircraft passed the required tests, were received at the airfield of the aircraft factory in Komsomolsk-on-Amur, after which they flew to the place of duty. How many cars in the party is not reported. The previous batch of Su-35S fighters, handed over in September of this year, consisted of three aircraft.

4++ generation multifunctional fighters Su-35S passed a cycle of ground and flight tests in various operating modes and flew from the KnAAZ airfield to the place of duty
- says the KLA message.

Excluding new aircraft, as of September 2022, the Aerospace Forces should have 104 Su-35S multifunctional fighters (two were decommissioned or lost before the beginning of this year).

Su-35 is a Russian multi-role supermaneuverable 4++ generation fighter with thrust vector control (UVT) engines. Generation 4++ is conditional and only indicates that in terms of the totality of characteristics, the fighter is very close to the characteristics of the fifth generation fighter, with the exception of low visibility technology. The aircraft is capable of carrying up to 8 tons of combat load and is the main fighter of the Russian Aerospace Forces, along with the Su-30SM, used as part of a special military operation in Ukraine. The aircraft is designed to solve the tasks of gaining and maintaining air supremacy, air support for troops in conflicts of any scale, isolating a combat area, and others.
Military Reviewin Yandex News
Military Reviewin Yandex Zen
11 comments
Ad