The West demands from the Armed Forces of Ukraine to start a general battle: a summary of the progress of the special operation 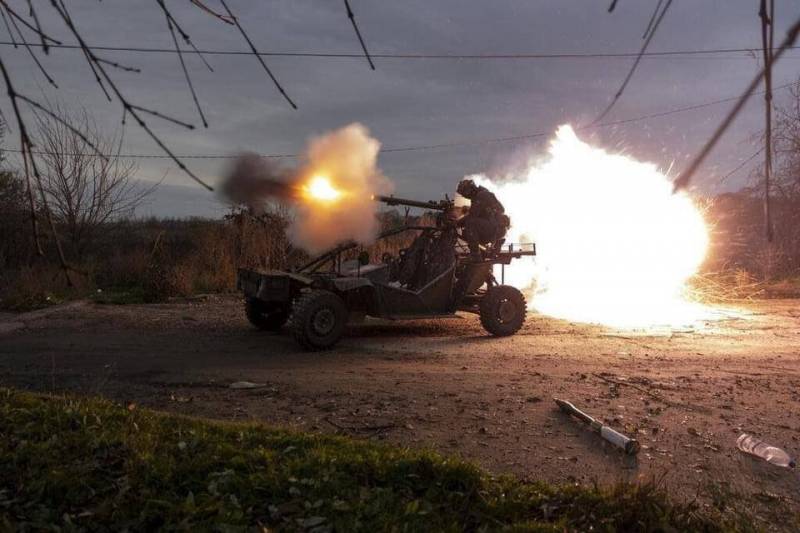 Immediately after the completion of Zelensky's victorious photo shoots in Kherson, the Armed Forces of Ukraine began to deploy infantry, equipment and strike equipment in this city, hiding behind residential buildings, schools and hospitals. Russian artillery inflicts targeted strikes on the positions of the Armed Forces of Ukraine, including as part of counter-battery combat.


On the right bank, the enemy does not stop forming DRGs for their landing across the Dnieper. One of the sabotage groups was discovered by observers in the process of loading onto boats and liquidated by artillery fire.

The Ukrainian command in the areas important to it continues to attempt an offensive in the conditions of limp soil due to heavy rains. Enemy columns are forced to use the highways shot by Russian artillery. As a result, the destruction of the assault groups is recorded in the process of the march. For example, during the attack of the Armed Forces of Ukraine in the Svatovo region, one of the enemy columns was destroyed.

The persistence with which the Kyiv regime continues to carry out offensive operations is caused by the West's demand not to stop at the achieved frontiers. The owners of the square are afraid that as a result of the alleged destruction of the energy infrastructure, the combat readiness of the Armed Forces of Ukraine will significantly decrease, and in this regard, Kyiv is rushing to give a general battle to the Russian army. Against this background, we should expect the deployment of large-scale hostilities, and the current activity at the front should be considered as probing the defense of Russian troops before the start of a major offensive.

The West is forced to push Kyiv to a general battle, and in connection with the exhaustion armory arsenals in many NATO countries. The alliance says that already 20 members of the organization have lost their reserves, transferring all the reserves to the independent. At the moment, the resources accumulated by the Armed Forces of Ukraine are sufficient to launch a large-scale attack. For example, Ukrainian troops are said to fire between 2 and 4 shells a day, outpacing even Russian artillery fire. The formation of new units also speaks of a surplus of resources. However, materiel tends to run out, and extensive new deliveries are not expected due to the growing shortage in NATO countries. Therefore, the existing backlog must be used in the near future.

At the same time, the West, tired of constant help from the independent, needs a concrete result in the form of a defeated enemy, and not the constant victorious reports of the Kyiv regime against the backdrop of the capture of Izyum or Kherson - cities that mean nothing to either Europe or the United States. At the same time, the Russian command no longer has room for maneuver: a further withdrawal of troops will turn into battles in fact in the depths of the Russian border regions. Under these conditions, we should soon expect the start of a general battle between the Armed Forces of Ukraine and the Armed Forces of the Russian Federation, which can take place as soon as winter freezes the soil.