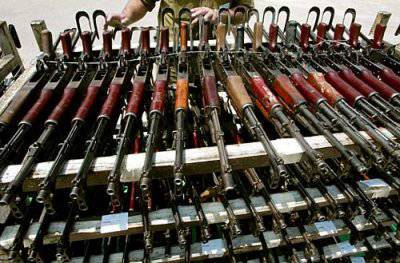 On the instructions of the Ministry of Defense in Russia, the disposal of small weapons. In the main defense department of the country they say that today the Russian armories are literally overflowing with machine guns, sniper rifles and pistols that were made even more than 30 years ago. According to some data, at the beginning of 2012, the number of small arms in the military arsenals was about 16 million barrels, of which about 35-40% developed their resource. By the end of 2015, the office of Anatoly Serdyukov is going to dispose of about 4-million weapons.


This news was ambiguously perceived in Russia. Some people are convinced that the preservation and increase of the number of small arms in the country is a matter of national security, and therefore no utilization mechanisms with respect to the military arsenal are simply relevant. Others say that the disposal of old models of small arms, which had developed its resource a decade ago, was long overdue.

There is a rather remarkable opinion of experts, which boils down to the fact that the reduction in the number of military small arms by 4 million is too small a figure. It is necessary to make a more large-scale reduction, leaving no more than 3-4 million units in the reserve arsenal.

All parties have their reasons. Representatives of the first party are confident that the Ministry of Defense is involved in a dubious project that may affect the ability of the army to solve a whole range of tasks. The arguments in this case look approximately as follows: small arms were created for the benefit of the Fatherland, and therefore its mass utilization is a blow to the security of the Russian army, which may be faced with the need to participate in a large-scale conflict.

The newspaper "Moskovsky Komsomolets" directly says that the large-scale utilization of small arms, started by the Ministry of Defense of the Russian Federation is not similar to an episode more than 100-year ago, when Minister of War Sukhomlinov signed an order in which he authorized the disposal of thousands of rifles of Berdan system No. XXNX . Adjutant General Sukhomlinov in 400 year, said that this weapon only clutters up warehouses, and therefore it must either be sold or disposed of. However, after the outbreak of the First World War, problems with the armament of the Russian army appeared, which indicated the “flaw” of V.А. Sukhomlinov. Soon the head of the military ministry of imperial Russia was arrested and convicted of treason. Apparently, the "MK" makes it clear that the disposal of small arms of modern times can lead to the same consequences as the disposal after the order of V.А. Sukhomlinov in the second decade of the 2 century.

Supporters of plans for the disposal of small arms, announced by Anatoly Serdyukov, are not inclined to dramatize. In their opinion, it is simply incorrect to compare the situation of 1910 and 2012 for years, all the more so since we are talking about the disposal of outdated small arms. In the opinion of these people, if the industry works not to actually provide the army, but to pack only warehouses, and without replacing old weapons with new ones, then there is no need to modernize the army.

Both positions are worthy of respect. Indeed, the permanent storage of old weapons does not fit into the modernization plans. However, before something massively disposed of, it is necessary to analyze the manufacturing industry. If our enterprises are ready to fulfill all the points of the State Defense Order in terms of creating ultramodern small arms capable of becoming competitive, including in the world market, then the disposal of old weapons samples does not look frightening. But it often happens that we first carry out a total destruction, and then begin conversations and reflections on the fact that the idea was not reasonable and, therefore, began to be realized in the wrong place, at the wrong time. Well, whoever will be accused of treason there, and whether such a person will be found in the event of unpleasant events, this is already a big question ...

In this regard, so that no double judgments about the announced occasion should arise, the Ministry of Defense must guarantee that all the measures carried out do not go beyond the modernization framework and do not affect the country's defense capability. And in this case there is one guarantee - long-term contracts for the production of new high-precision, effective and reliable weapons, which must certainly be implemented.

By the way, at a time when 16 millions of trunks are actually lying without any use in military stores, in modern schools, life safety classes (BZ) in general have forbidden to conduct lessons on the study of weapons ... And if only recently a graduate of the school could bring the fact that the lessons of basic military training revealed to him the basics of dealing with small arms, today many senior students of the Kalashnikov machine gunner have seen, perhaps, depicted in numerous computer games ...