Blockade of Leningrad must be recognized as genocide 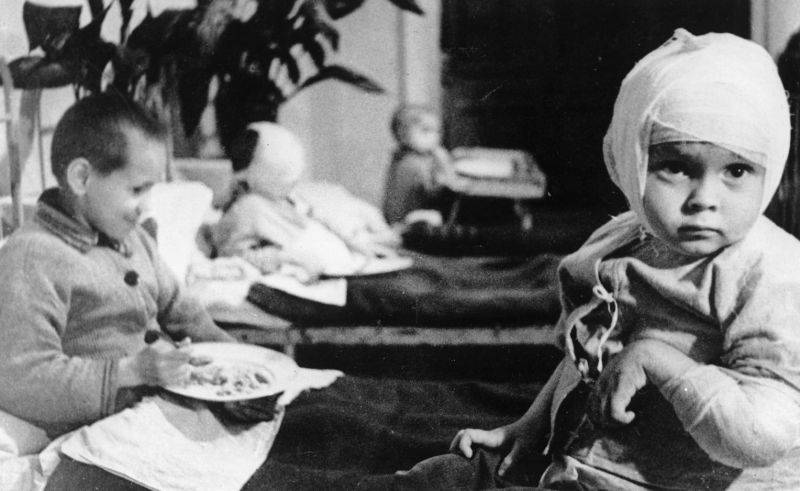 Leningrad children, wounded during shelling of the city, in the hospital during lunch. In the foreground is four-year-old Genya Mikulinas. Fragments of a German shell wounded him in the head and left arm.

Nuremberg and the Siege of Leningrad

The Nuremberg trials were opened on November 20, 1945 by Iona Nikitchenko, Deputy Chairman of the Supreme Court of the USSR. Thus, the countries of the anti-Hitler coalition recognized the main contribution of the USSR to the Victory over Nazi Germany and the gigantic losses of our country. The hearings in the case and the issuance of a guilty verdict took 316 days, of which three days were devoted to the blockade of Leningrad (in February 1946).

The prosecution qualified the blockade of Leningrad as a war crime, the senseless destruction of the city. The legal assessment of the destruction of Leningraders with the help of famine in Nuremberg was not formulated. This was partly due to the scarcity of materials.

In Leningrad, only two official German documents of August 1941 were presented. This is an order to Army Group North, which refers to the organization of non-exit of civilians outside the encirclement. And the directive of the Chief of Staff of the Kriegsmarine (German Navy) on the destruction of Leningrad:

“The Fuhrer decided to wipe the city of Petersburg from the face of the earth. After the defeat of Soviet Russia, the continued existence of this largest settlement is of no interest.”
The orders of the German High Command showed that the Nazis were not planning to capture Leningrad. The city was planned to be destroyed along with all the inhabitants.

The Tribunal was prepared in a hurry, and not all the materials had time to be processed and prepared. Later, documents of a personal nature were presented. Diary of Tanya Savicheva:

“Everyone died. Only Tanya remained.
And the school diary of the poet Anatoly Molchanov:

"Shooting. There are no lessons."
Later Molchanov writes:

“Deafened, in a smoking jacket, having smashed my face against the panel, I am still alive, and only a briefcase remained from Yurka.”
Personal testimonies caused a great emotional response to the process, but legally the blockade of Leningrad was qualified as a war crime, and not as a crime against humanity. 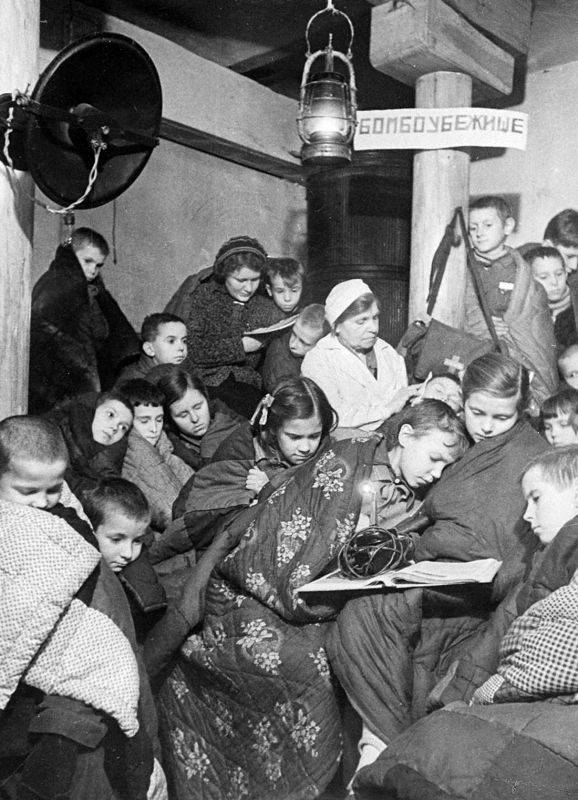 Leningrad children in a bomb shelter during a German raid aviation

Should be recognized as genocide

The war in the East was fought for destruction. The war was total: with the aim of the complete destruction of the Russian (Soviet) statehood and people. Therefore, the German Nazis destroyed not only the command staff of the Red Army, political workers, representatives of the Soviet government and ordinary communists. They deliberately destroyed prisoners of war with the help of hunger, cold, lack of hygiene, traditionally shot, hanged, drowned, etc.

The Nazis also destroyed the civilian, civilian population, women, the elderly and children. The occupied regions were cleared of "Russian subhumans". Near Leningrad there were also concentration camps - in Rozhdestveno, Vyra, Siverskaya and near Gatchina. A mass grave was found on the territory of the Luga region. On the territory of Luga, the Nazis set up a transit and filtering camp "Dulag-320" for Soviet prisoners of war, it was distinguished by a very cruel regime.

But the remains of not only prisoners of war, but also women and children were found in Luga. The bodies of 15 teenagers who allegedly died in 1941 were found in the Tosnensky district. They were students of the factory school. They made their way home and were dressed in craft uniforms (overcoats). This was enough for the execution.

In the village of Nikolskoye, Gatchina District, in November 1941, more than 900 patients of the Kashchenko psychiatric hospital were killed. On the territory of the village Makaryevskaya Pustyn in January 1942, 248 disabled women were shot.

Dulag 154 operated on the territory of Gatchina - a prisoner of war camp and a concentration camp. The regime of the camp was distinguished by extreme brutality. According to official Soviet data alone, more than 80 thousand Soviet citizens, both civilians and prisoners of war, were killed in the camp.

In the period from 1941 to 1944, on the territory of the Leningrad Region, the German invaders and their accomplices exterminated more than 33 thousand civilians and over 109 thousand .prisoners of war. More than 276 thousand people were forcibly sent to forced labor in Germany and other countries.

Russia's losses during the blockade of Leningrad ranged from 600 thousand to 1,5 million people. In Nuremberg, a figure of 632 people was announced. Of these, only 253% died from airstrikes and shelling, while the remaining 3% died of starvation. The world knows almost nothing about this tragedy. But in the USSR they remembered this.

From the testimony at the Nuremberg trials of the rector of St. Nicholas Church of St. George's cemetery in Leningrad, Archpriest Nikolai Lomakin:

“On the day of my parents' Saturday, February 7, 1942, before the start of Great Lent, I came to church for the first time after my illness, and the picture that opened up to my eyes stunned me. The temple was surrounded by piles of bodies, partially blocking the entrance. These piles reached from 30 to 100 people. They were not only at the entrance to the temple, but also around the temple. I witnessed how people, exhausted by hunger, wanting to deliver the dead to the cemetery for burial, could not do this, and the exhausted themselves fell at the ashes of the deceased and immediately died. These pictures I had to watch very often.
Such terrible pictures were everyday life in besieged Leningrad. 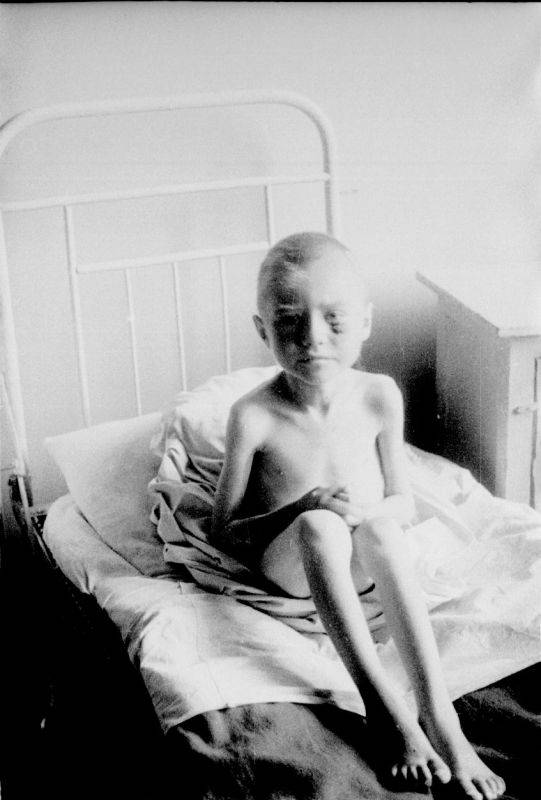 A girl emaciated from hunger in a Leningrad hospital. 1942

In modern Western Europe and in the Western world in general, genuine история World War II had almost completely destroyed and rewritten. For example, in Germany, the Germans do not know that England and the United States offered the USSR to divide the Third Reich into several German states.

In 1944, the Anglo-Saxons came up with the "Morgenthau Plan" - to destroy German industry, turn the country into an agrarian one, and reduce the population. So that Germany would never again threaten the Western "democratic" world. Moscow opposed these plans. But the plan in an abbreviated form was implemented in the western zone of occupation. Modern Germans are sure that the Russians are to blame for the division of Germany.

Right now Russian and Soviet monuments and cemeteries are being destroyed in Europe. Russians are deleted from the history of Europe and the world. Only various black myths are preserved and cultivated about the “natural aggressiveness of the Russian Scythians”, the “Russian empire of evil” - the Russian Empire, the USSR and the Russian Federation, and the “Russian murderous tyrants” - Ivan the Terrible and Stalin, etc. Again in the West there is a desire to solve the "Russian question" - to demilitarize and destroy Russia, to "denazify" the Russian people.

Therefore, it is important in Russia itself to preserve historical memory, its culture and history. To this end, the prosecutor's office of St. Petersburg demanded that the blockade of Leningrad be recognized as a crime against humanity, a war crime and genocide of the Soviet people. The Nazis destroyed more than 1 million Soviet citizens in Leningrad. These facts are confirmed by numerous archival documents, including photo chronicles, and the testimonies of Leningrad residents.

Recognition of the blockade as genocide will allow Russia to put forward claims against the aggressor countries. And this is not only Germany, but also Finland, Belgium, the Netherlands, Norway (SS volunteer legions), Spain (“Blue Division”), Latvia (Latvian punitive units). Genocide is considered a war crime without a statute of limitations.

As a result, the blockade survivors and their relatives and descendants will be able to rightfully file a claim with the government of Germany or Finland and receive compensation. For international lawsuits and for similar appeals of citizens, state bodies are responsible - the Ministry of Foreign Affairs of the Russian Federation, the Ministry of Justice and the Prosecutor General's Office. 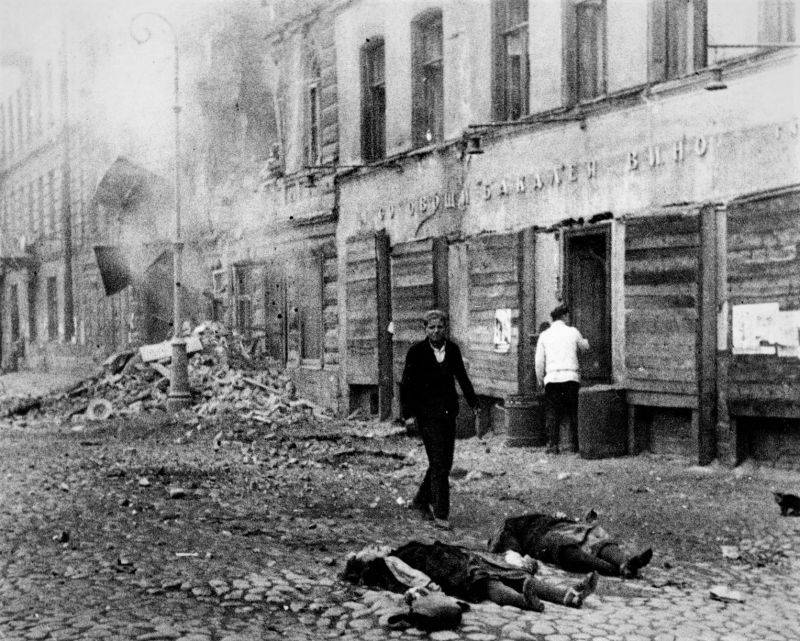 Victims of the first German shelling of Leningrad on Glazovskaya Street. September 1941