Do debts written off in respect of foreign countries benefit Russia? 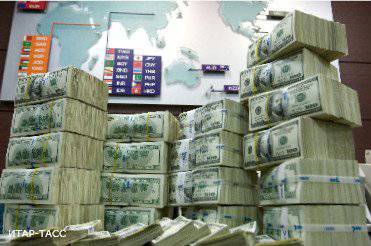 The other day there was information that Russia, with 2008, had written off the 20 billion-dollar debt (the amount in US dollars) to African states. This information was announced from the rostrum of the UN General Assembly by the head of the Department of International Relations of the Ministry of Foreign Affairs of Russia Vladimir Sergeyev. In addition to the impressive amount written off, the Russian Government has made 50 a millionth contribution (also in dollars) to a fund specially created at the World Bank for the poorest countries in the world. Russia financially encouraged educational, medical, and public projects in a number of African states, implementing, among other things, joint programs. If we consider only the educational sphere, today about 4 thousands of students from different African countries are studying at Russian universities for free, that is, with 100% funding from the Russian budget.

The representative of the Ministry of Foreign Affairs of Russia, Mr. Sergeyev, said that the debts should not be considered donated to Africa. In fact, this is a kind of exchange of debt relief for development programs, in which Russian representatives, including representatives of private business, can take part. Debt cancellation occurred due to the fact that Africa would still not be able to pay its debt to Russia, which means that it is necessary to look for other ways of contacts. By the way, we began to hear words about the impossibility of paying debts from different countries with regard to Russia with enviable regularity. And every time the same thought expresses itself as an excuse: they say that all this will return a hundredfold, no need to skimp ...

In general, the prospect is drawn rather gracefully: we write off the debt, our business and government structures of Africans immediately admit to their territory that Russia participate in large-scale projects in various fields of activity. And after that, it seems, Russia should not just regain the multibillion-dollar funds invested in Africa, but also increase the return on its generosity.

It would seem that all we have to do is get pocket calculators and count all the benefits of writing off a solid debt, equal, for example, to 20 (!) Expenditure items of the budgets of the Kursk or Bryansk regions for the 2012 year.

However, before falling into euphoria from another manifestation of friendship to fraternal African nations, I would like to consider the situation with how far the debts written off earlier were able to translate into promising business projects on the territory of various acceptor states of Russian (Soviet) monetary investments. We will not delve into the Soviet history, and pay attention to the new Russian time (with 1991 year).

So, if you pay attention to those countries to which Russia has written off its debts, then, perhaps, Syria can be called a state that has declared and continues to declare its necessarily friendly position towards the Russian Federation. Moreover, before the beginning of a bloody civil war in this state, on its territory there existed, indeed, a sufficient number of joint projects, from which the Russian side extracted certain profits. In this case, the cancellation of the debt can still be called strategic and fully justified.

If you pay attention to other states in respect of which Russia has shown unprecedented generosity, some of them with a stretch can be called insolvent.

In particular, in the 2000 year, a debt in the amount of 10 billion dollars was written off to Vietnam. And it was hardly possible even to call this country frankly insolvent in those years. Today, the growth of the Vietnamese economy is ahead of the growth of the Russian economy, and ten billions of Hanoi could afford to find out, say, domestic reserves. In all likelihood, debt relief to Vietnam of the 2000 model of the year should have served as some kind of act of goodwill towards the official Hanoi, so that it was possible to extend the lease of the military base in Cam Ranh. Under the Soviet-Vietnamese treaty, Moscow had the opportunity to exploit Kamran for free. But the Soviet Union collapsed, and since 1991, the rent has become, let's say, not entirely free. The “not entirely free” rental was due to end in 2004, when Vietnam could demand full payment for the operation of the military base. Moscow is writing off Vietnamese debt, although the national debt of Russia by that time was estimated at a sum close to 50% of GDP. But this step did not lead to any progressive agreements. The Kamran base flew out of our hands, and who is to blame for this, and what should have been done to make the base remain Russian - a question from the category that hung in the air ... In general, in 2002, the Russians learned that the country simply did not have money to keep its military base in distant Vietnam. Of course, there was little money, and therefore the military personnel still had questions, but the civil majority took the departure from Cam Ranh for granted.

By the way, Vietnam, according to some sources, offered Russia to pay 300 million dollars a year, but in Russia it was perceived as ingratitude for writing off the debt, or something else, but in the end, many agreed on the opinion “and we need a military base in Cam Ranh –– it’s just a hassle ... ”

In 2008, Russia writes off about 4,5 billions of Libya’s dollars. It would seem, everything is clear: the links with the then leadership were such as the documents on the deliveries of the Russian weapons Libya was signed without further ado, and joint projects on hydrocarbons also worked as planned. But then, suddenly, the West finds out for itself that, in Libya, it turns out, the anti-democratic regime, that Libya needs to be democratized urgently ... At the same time, the democratization went so far that there was no trace of joint projects with Russia in Libya, the written off debt was forgotten, and Moscow in general, for a “democratic” Libya, it turned into the capital of an unfriendly state, which until recently did not hoist the flag of the new government on the building of the Libyan embassy. In general, here too, debt relief did not become an impetus for new mutually beneficial relations between countries. About write-off in Tripoli and Benghazi just forgot.

In 2008, Russia decides to write off the 8 billionth Iraqi debt. And here again a certain oddity is manifested. Well, in any way Iraq does not correspond to the concept of the poorest country in the world. And if not, then why such a solid debt write-off was carried out?

However, in the case of Iraq, there is still a positive moment for Russia associated with joint trade projects, which were only recently implemented (on paper). We are talking about the signing by Russia and Iraq of a number of contracts for the purchase of the latest Russian weapons. The total amount of these contracts is more than 4 billions of dollars for the purchase of weapons from the Russian Federation (Pantsir-C1 system, MiG-29М / М2 fighters, Mi-28HE helicopters, air defense systems and armored vehicles). This fact immediately caused a wave of disapproval in the West: they say, how can it be so ... Iraq was democratized by us, and its leadership concludes contracts with Russia ... Disorder! Therefore, after the announcement of Iraq’s contracts with Russia, the United States immediately became more active and declared that they could fully cover all Iraq’s needs for airplanes, helicopters and armored vehicles, air defense systems and other weapons, claiming the amount of contracts worth $ 12 billion. And if Russia gives way here, then it will be possible to state that a kind of financial overturn in the form of debt cancellation will also become a common senseless gift to a country that could easily pay its debts.

No less questions and debt relief for other countries. After the cancellation of the DPRK's debt, Pyongyang was offered to participate in a joint project to lay the Trans-Korean railway to the ports of South Korea, and also to lay power lines from Russia to South Korea through the territory of the DPRK. However, so far there is no question about any business projects. Moreover, the DPRK media voiced the position of the country's leadership, which promises to deliver almost a nuclear strike on Seoul, if it does not stop the “dirty insinuations” against the North Korean people. What kind of railway there is ... What kind of power lines are here ...

And the writing off of Afghan debt in 2007 also can hardly be called an example of strategic thought in terms of joint business projects. If we consider that after 2014, the Taliban will most likely be in power in this country again, or the forces that are in close contact with them, the 11 billionth gift from Russia will also be quickly forgotten ... And who remembers such a thing? Whether it is “imperial ambitions”, “strangling democratic ideals” or “Russian colonization”, this will cultivate for a very, very long time, but the fact that the money of Soviet (Russian) taxpayers turned out to be a solid gift for local economies is forgotten quickly.

In general, in order to establish partnerships and entangle ourselves with bonds of friendship, you can generally write off all debts and hope that the “partners” will give us some preferences. But, guided by the facts of the recent history of debt relief, it is hardly possible to say that the preferences for Russia in these countries will surely manifest themselves.
In this regard, I would like to think that, after all, regular statements about debt cancellation to various countries of the world, like write-offs themselves, have a strategic goal, and are not a banal manifestation of little explainable political and economic generosity. As you know, with good intentions, the road is lined not at all in the heavens ...