The national economy of the USSR could not stand the test of war? 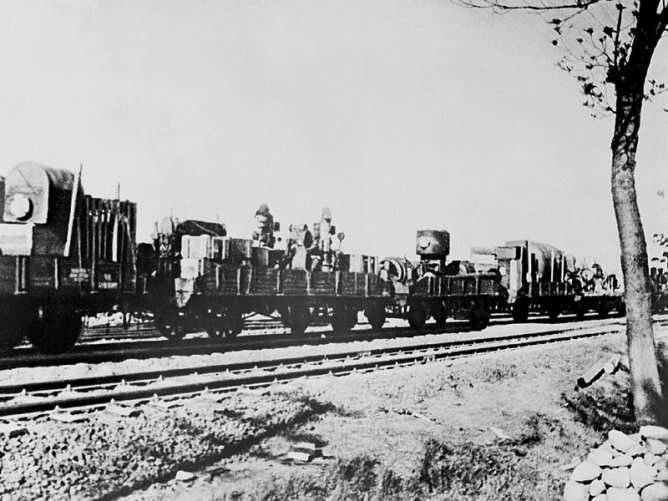 In the last twenty to twenty-five years, the myths that the national economy of the Stalinist USSR was ineffective and did not stand the test of the Great Patriotic War, that the Soviet Union saved the aid of the Western allies, have become very popular. Thus, the memory of our fathers and grandfathers, mothers and grandmothers, through whose work the USSR became a superpower and won the most terrible war of all history humanity.

Studying the history of the development of industrialization in the Soviet Union, the fact that the Soviet leadership in advance began locating productive capacities, especially directly connected with the military-industrial complex, in the regions of the Soviet Union that were unattainable for the air forces, immediately struck. First of all, such enterprises were built in the Urals and in Siberia. In addition, the Soviet government tried to duplicate the construction of the most important factories key to the national economy: if one enterprise existed in the West of the country, another was built in the East. National security issues were in the first place for the Soviet government. In the east of the USSR, in the pre-war years, a duplicate industry was actually created.

However, despite the titanic work that the Soviet people did literally in a few years, due to the bias in the development of the country's economy, which arose during the Russian Empire, by the time Hitler Germany attacked the USSR more than two-thirds of the Union’s defense complex was in the European part. Naturally, the negative impact on the supply of armed forces weapons, ammunition, various equipment and ammunition in the initial period of the Great Patriotic War. Therefore, the Soviet leadership under critical conditions of defeat in border battles, the breakthrough of German troops inland, under the constant attacks of the German Air Force had to organize a large-scale operation to transfer industrial enterprises to the East of the country. This operation has no analogues neither in scale nor in the level of organization and execution. 2593 industrial enterprises with all the equipment were transferred to the East of the Soviet Union (of which 1360 was large). 12 million people were also evacuated to the East, of which 10 million by railways, 2,5 million cattle were evacuated. Another feat was accomplished after the transfer of enterprises and equipment, they almost immediately began to give products. In fact, this is one of the most amazing sagas in the history of mankind, where equally deserve the eternal memory of the workers of that heroic era and the leadership of the USSR, including Joseph Stalin.

During the years of the hardest possible test - World War II, the national economy of the USSR was more efficient than the economy of the Third Reich. Hitlerite Germany, having at its disposal almost the entire economic power of Western and Central Europe, produced 2,1 times more electricity, 3,7 times cast iron and steel, 4,3 times coal than the USSR. The Third Reich annually produced on average: 21,6 thousand aircraft, 11,7 thousand tanks, Self-propelled guns and assault guns, 87,4 thousand guns, 21,9 thousand mortars, 2,2 million carbines and rifles, 296, 4 thousand machine guns. The Soviet Union was inferior to Germany, which gained access to almost all the resources of Europe and its industry in the production of the most important types of basic industrial products. However, Soviet industry released on average annually during the war: 28,2 thousand combat aircraft, 25,8 thousand tanks and self-propelled guns, 126,6 thousand guns, 102,1 thousand mortars, 3,3 million rifles and carbines , 417, 9 thousand machine guns. As a result, per 1 ton of steel produced, the enterprises of the Military-Industrial Complex of the Soviet Union produced 5 times more tanks and guns, and 1 thousand metal-cutting machines - 8 times more combat aircraft than in the industry of the German Empire. The USSR was much more efficient in using every ton of metal and fuel, every unit of industrial equipment, than the Third Reich.

This fact is partly due to the fact that the German leadership was quite confident in terms of a “blitzkrieg” and did not immediately complete mobilization in the country's economy.

Therefore, there is no reason to say that the Soviet economy during the years of Stalin’s rule was ineffective and did not stand the test of war. Otherwise, the Wehrmacht would have marched through Red Square and the history of mankind has changed a lot. The Red Army was able to win a convincing victory on Hitler’s Germany and its allies (explicit and hidden) precisely because the Victory was already won by the Soviet leadership and people in the 1930s, when a powerful economy was created, and above all a military-industrial complex.

A favorite argument that proponents of the inefficiency of the Soviet economy during the Great Patriotic War, is lend-lease assistance. During the Second World War, the United States implemented a state program, according to which the Allies were given equipment, ammunition, food and strategic raw materials, including petroleum products. Some authors have agreed that the victory of the USSR over Germany directly depends on the military-economic supplies under the Lend-Lease. However, the figures refute this view. In particular, compared with the volume of Soviet production during the war, lend-lease supplies were: 9,8% for aircraft, 6,2% for tanks and self-propelled guns, 1,4% - for guns, for machine pistols - 1,7%, for guns - 0,8% , shells - 0,6%, mines - 0,1%. The total cost of the Lend-Lease in 46-47 billion dollars, the share of the USSR had - 10,8 billion dollars (according to other data - 11,3). England, which did not conduct such heavy battles as the Soviet Union, received products worth 31,4 billion. Of great importance is the fact that most of the products arrived already when it became obvious that the blitzkrieg was failed and the war would be protracted. Until the end of 1941, during the most difficult period of the Great Patriotic War, the USSR received only 0,1% of all US aid, which was recorded in the signed documents. The Red Army has dispelled the myth of the invincibility of the German divisions and the possibility of a “blitzkrieg” against the USSR only at the expense of the resources of the Soviet economy.

Chairman of the USSR State Planning Committee Nikolai Voznesensky, in his book The USSR Military Economy During the Patriotic War, published in 1948, estimated the size of industrial goods supplied by the Allies to the Union at about 4% of domestic production during the war economy period. All this convincingly proves that everything necessary for waging the hardest and long war of the USSR was ensured thanks to the heroic work of the home front workers and the amazing effectiveness of the Soviet national economy.

At the same time, it is impossible to deny the fact of this assistance. In some areas, American assistance was very noticeable. In particular, the Allies delivered a significant number of vehicles (for example, the Lend lizov Studebakers) became the main chassis for Katyusha’s jet systems, as well as food products — the famous American stew, egg powder, flour, mixed feed, and a number of other products that played prominent role in providing armed forces and rear. Obviously, these supplies played a positive role. But to say that US aid has played a decisive role and there is nothing to say. The victory in the Great Patriotic War was achieved thanks to the unprecedented courage and perseverance of soldiers and officers, the work of home front workers.