Poland is at war with Russia and Belarus 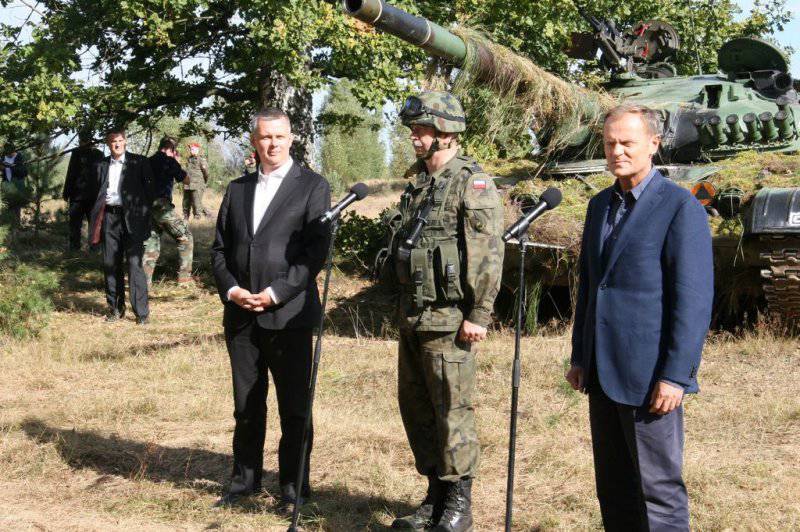 13 years have passed since the Polish flag was raised in front of NATO headquarters. This meant that Poland joined the most powerful world military organization. The Polish government was confident that now the country's security is ensured. Warsaw has formulated its strategic task - to enter the structure of the Western world.

The implementation of plans for the integration of Poland into the world of Europe was facilitated by the withdrawal of Russian troops from the country’s territory in September 1993. Since then, all the statements of the Polish leadership about cooperation with Russia have become empty words, because Poland has not even considered any "eastern" projects.

Poland has become one of the parties to NATO projects, such as the Partnership for Peace and the Council of the Euro-Atlantic Partnership. On the Polish territory in the city of Bygdoshe is located the Center for the training of multinational forces of NATO.

The Polish military contingent participated in NATO operations in the Persian Gulf, Kosovo, Bosnia and Herzegovina, Afghanistan (2007-2008), Iraq (2003-2008), in missions to protect the Baltic countries, in special operations in the Mediterranean and the Atlantic Ocean.

Despite the fact that a lot of time has passed since the Czech Republic, Hungary and Poland joined the Alliance, there are still no real plans to defend these countries.

But some changes have occurred. As a result of the military reform, the Polish army began to comply with NATO standards and fully switched to the call for a contract. Joint exercises of the Alliance forces are systematically held on Polish territory. Poland is also a participant in the program to create a European missile defense system: it is planned that by the end of 2018, American missile defense systems will be deployed at the Polish military base Reznikov.

In October 2012, the next strategic exercises of the Polish Army under the code name "Anaconda-12” passed. Of course, to maintain the professional level and develop the skills of joint actions of the armed forces, each country needs to conduct military exercises. Only this Polish anaconda clearly has an anti-Russian mood. And the scenario of the exercises is so uncomplicated that the opponents of the Polish army are easily guessed. The role of the aggressor was clearly prepared for Russia and Belarus.

About 15 will be fought against the virtual opponent in the exercises by thousands of servicemen of various types of troops, 150 armored vehicles, 25 combat aircraft, 30 helicopters, 20 ships of various classes. The maneuvers covered the territory of five provinces.

According to the scenario of the exercise developed by Polish staffers, the reasons for the armed conflict are political and economic differences between the countries of Europe and the energy supplier - Russia, as well as the confrontation between Poland and Belarus due to the territorial claims of the latter. According to the prepared scheme, Poland is trying to get an independent source of oil and gas from its eastern neighbor, but the aggressors are carrying out a force plan that prevents Poland’s intentions.

The formed plan of maneuvers provided for a local level of conflict with the possibility of becoming a large-scale one.

According to the exercise pattern, to defend the enemy’s attack, Polish defenders deployed land, air and sea units of the armed forces of the Polish Army.

During the exercise, it was planned to work out the command and control system, implement measures to improve defensive actions, check the interaction of state structures with local authorities and armed forces during armed conflict.

The fact that Russia is the main opponent in Polish exercises is not a surprise. The military-political leadership of Poland is seriously concerned about the threat from its eastern neighbor. Especially after the successful Russian operation to eliminate the Georgian-Ossetian-Abkhaz military conflict (2008). Another thing is surprising: after all, Belarus has never made territorial claims against Poland. But Polish geopolitics have long dreamed of seeing their frontier closer to Minsk.

It is also striking that the exercise scenario contradicts the position of Polish President B. Komorowski, who opposes the country's participation in the military plans of Europe, preferring the development of its own missile defense system. As an experienced politician, he sees the strengthening of his country's security in establishing economic relations with Russia and Belarus.

But the military bloc in the Polish government is heavily influenced by the United States. Therefore, they constantly put pressure on the president. The military lobby by all means accelerates the deployment of US units in Poland and blocks any initiatives of Russia in creating a new European security system.

Against this background, the Polish exercises "Anaconda-12" have all the hallmarks of a strategic offensive operation, and not a defensive one.

In order to fulfill their ambitious military doctrine, the Poles are not in a hurry to disarm, despite the fact that many European countries, being in the nets of the economic crisis, have significantly reduced their armed forces.

Currently, Poland has an 100 thousand army, in which 65% are land forces. Ground units consist of 13 brigades, 20 regiments and battalions. The military equipment available in the arsenal of the Polish army is mainly used:
- 128 obsolete German models tanks and 232 tanks, which are modernized Russian models of the T-72M1;
- armored vehicles are represented by thousands of old BMP-1 and about 250 units of Polish-made armored personnel carriers under the Finnish license (“Wolverine”);
- artillery armament consists mainly of Soviet self-propelled guns and a small number of Polish self-propelled guns "Crab", made on the basis of T-72;
- The submarine fleet includes 5 submarines of obsolete Soviet and Norwegian models;
- pride of the surface fleet Poland - a pair of former American Perry-type frigates, five Soviet corvettes and several landing ships;
- rocket artillery provided by volley fire systems consisting of Soviet-Czech 240 varieties of the Grad MLRS and Polish Langusta;
- in service with Polish air defense are the Soviet air defense system "Cube" and C-125 and two long-range C-200В units;
- The Air Force has 48 Soviet Su-22 and Mi-24 helicopters, Mi-2, Mi-24 helicopters, and the newest F-48С bought on credit from 16 of their own 29 Soviet aircraft and helicopters production PZL-29 "Falcon".

Since during the years of Soviet-Polish friendship and cooperation, joint efforts were used to build factories and introduce technologies, the Poles now have the opportunity to independently produce airplanes, tanks, helicopters, armored vehicles, small weapon and other.

Despite the fact that the Polish army is better armed than the Georgian one, it is significantly inferior to the armed forces of only Belarus alone (without taking into account Russia's armament).

Moscow, of course, takes into account the likelihood Poland unleash a conflict against Russia and Belarus and is ready for retaliatory measures.

The crisis that engulfed the whole world could not but affect the level of NATO’s readiness - it is increasingly degrading. This fact confirms the fact that the long sluggish operation in Libya demanded from NATO a tremendous strain of all resources, including the power of countries such as the United Kingdom.

From the point of view of the West, it needs the Polish forces to protect the eastern borders of Europe, but it costs a lot of funding, and it’s difficult for NATO to incur such costs now - because this threat may never materialize.