Syrian special forces - is it about us? 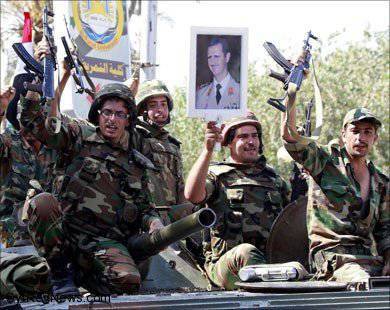 Thousands of special forces of the Syrian army are now engaged in clashes with militant units of the Syrian Free Army. Most of the units on both sides are military instructors from the former republics of the Soviet Union who have gone through international and local military conflicts. For example, one of the special purpose brigades of the Syrian government army (an analogue of our GRU special forces) is "trained" by Vitaly, colonel of the USSR Armed Forces reserve-RF. He does not disclose his name and biography details because of fears for the family living in Damascus.

- How did you get to Syria?

- I graduated from the Novosibirsk Military Command School. Specialization - special intelligence. After graduation - distribution to Afghanistan, he wrote a report. Then Tajikistan, Abkhazia, two Chechnya. Everywhere commanded intelligence units. I have the highest state awards.
After entering the reserve, he settled in one of the MIC structures. I went here as a representative. Then they offered the work of an instructor of special units. Agreed Moved family.

- What is the combat potential of the Syrian army?

- Laxity is strong. In reality, only specialists are fighting. Combat units consist of Alawites and Christians. Last a lot. These guys are learning, easy to navigate the terrain, working with the most modern intelligence complexes. You can only dream of some in the Russian army.

- You say trained, but why so long can not clear Aleppo?

- I personally sent to the top of the cipher about the concentration of militants in the city two years ago. No reaction followed. During this time, the militants managed to equip a good fortified area. The whole city is shrouded in a network of tunnels. From one house you can go to another to the next street. The same situation was in Grozny in 1995 year. And I decided to prepare special units for work in the city. The decision was approved by President Assad himself. Three months of training in the suburbs of Damascus. In late September, began to work. The situation has changed in our direction.

- Tactics of work of special forces?

- According to the Battle Regulations, the mechanized order is covered by motorized rifle units. But here, in contrast to Grozny, there was a problem of preserving the housing stock and residents of the city. The shelling of fortified fire points fell away, these points were suppressed by our specialists. There were civilians there, and shelling on the squares was forbidden to us. It was possible to level the city with the land, the Assad army has such capabilities, but at the commanders' council it was decided to work on a point. Because of this, the speed of the attacking orders falls.

- Was it different in Grozny?

- Our assault groups marched there, at the slightest fire resistance they caused artillery fire and aviation. In Syria, Bashar al-Assad ordered the preservation of peaceful people.

- You are faced with mercenaries ...

- Education of the rebels to work in the city are pro. Just the other day we suppressed a position in one of the areas of Aleppo. There, militants were killed at the headquarters, including those of European appearance. And in the safe - documents of citizens of Russia, Ukraine and Central Asia. Across Russia - passports issued in the Nozhai-Yurt district of Chechnya, in Malgobek of Ingushetia, even in Vladikavkaz and Tskhinvali. All copies are sent to our consulate.

- Purely military way - no. Now including with the help of our instructors, the Syrian army is gaining experience. A supply of Russian air defense systems will help close the sky of the country.

- Met in a battle with former colleagues?

- When there was a special operation in Damascus, we covered the gang. They took the house, found the documents of those killed. Lots of Turkish passports. Also an ID card officer. The murdered fighter was a colonel in the Ukrainian army. I remember him, he served in my platoon in school. Also, the captain was born from Tatarstan. His military specialty is a sniper.