Europe before a choice: the division of the banking system or world war 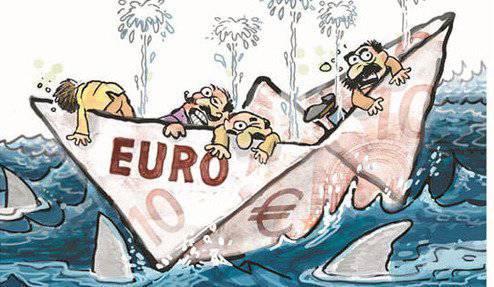 The prospects for the financial collapse of the transatlantic region and the explosive state of the Middle East region exacerbate the threat of a third world war like never before. The actions of courageous people are necessary in order for events to take a different path and avoid catastrophes.

The debate around “quantitative easing III” clearly shows how far it all went - the question is being discussed whether the Fed, the European Central Bank and the central banks of other countries should print an unlimited amount of money to postpone the collapse of the transatlantic banking system, or wait a minute. Part of the financial establishment around US Treasury Secretary Timothy Geithner and Fed Chairman Ben Bernanke is convinced that only a flood of liquidity markets can prevent a collapse in the very near future. Others fear that hyperinflation will not allow Obama to be re-elected.

The pretentious statement by European Central Bank Chairman Mario Draghi that he would do “everything” to save the euro, including direct funding from governments and banks, provoked strong protest. The head of the Bundesbank, Jens Weidman, threatened to resign in protest against the hyperinflationary policy. An even more fierce struggle unfolded between those in the establishment who wanted to introduce a separation of the banking system, as it was during the action of the repealed American Glass-Stigoll law, and those who in imperial traditions believe that only new wars can be held in power.

Meanwhile, the Middle East is a copy of the Balkans in 1914 year - a chessboard, on which the imperial players move the pieces, and where one shot can lead to a world war.

Goebbels would have envied Western media coverage of Syria. At one time they came up with a fake about weapons of mass destruction in Iraq, and just as today, President Obama and French President Hollande speculate on the threat of using chemical weapons by the Syrian government - an excuse for Western military intervention. In fact, US and UK special forces are conducting a secret aggressive war against the Assad government, hand in hand with Islamic fundamentalist Salafists, Al Qaeda and the PKK (Kurdish separatists), funded by Saudi Arabia and Qatar.

The former chief of staff of the French Air Force, General Jean Fleury, warned the French government against military intervention, including the establishment of a no-fly zone. General Martin Dempsey, chairman of the Joint Chiefs of Staff of the United States, also warned against putting into practice the idea of ​​establishing a flight-free zone over Syria. During a trip to London, Dempsey expressed concern about the worst case scenario in Syria, when she would become an “unstable state with all the risks that would follow.”

Syria has a military alliance with Iran, in addition, a NATO military operation in Syria will lead to a confrontation with Russia and China.

Here, too, are pawns on a chessboard: a dubious statement by the IAEA about the alleged acceleration of the Iranian nuclear program, contrary to the latest estimates of all American intelligence services (national intelligence assessment of the situation). Israeli Prime Minister Netanyahu says he wants to appeal to the UN General Assembly in New York at the end of September to “openly tell the world the truth about the regime of terror in Iran, which represents the greatest threat to world peace.” Netanyahu and Defense Minister Ehud Barak have repeatedly stated that they would strike at Iran.

General Dempsey stressed that the strike by the Israel Defense Forces on Iran would “put off, but probably not destroy, Iran’s nuclear program.” He added that the Israeli attack on Iran would cause widespread consequences in a very volatile region.

Thus, the head of the Joint Chiefs of Staff of the United States clearly expressed the position of the American military towards Syria and Iran: they do not support confrontation with Russia and China. Behind the scenes, the US and Russian military are developing a strategy to prevent war; without such a strategy, a catastrophe would have happened.

In this context, the open letter of Rep. Republican Walter Jones, President Obama, is of particular importance. Jones claims that another war without the approval of Congress will violate the exclusive constitutional right of Congress to declare war, and this will be grounds for impeachment.

Most of all, in this situation, the lack of public awareness that we are on the verge of a third, this time thermonuclear war, is scary. During the Caribbean missile crisis, President Kennedy said that those killed during the nuclear war would be happier than the survivors, who would have to suffer from radiation and other consequences. During the crisis in connection with medium-range missiles, scientific conferences were held at the beginning of the 80-s on the effects of the nuclear winter, then hundreds of thousands of people took to the streets.

And today, when the threat of human existence?

The dictatorship in the media and the conformism of all parliamentary parties led to the fact that there is not even talk about it.

But there is a way out. It is necessary to immediately implement the separation of the banking system in the traditions of the Glass-Stigoll Roosevelt law, to restore the sovereignty of monetary and economic policy, and with the help of the credit system to start implementing an infrastructure program in Southern Europe, the Mediterranean region and Africa.

If you continue to issue money without limit and move to hyperinflation, as was the case in 1923, reconcile with the dictatorship of bankers implanted through the European stability mechanism and surrender to the world empire, when any government that opposes such a policy is swept away by color revolutions and subversive activities, the question will be raised about the survival of all mankind.