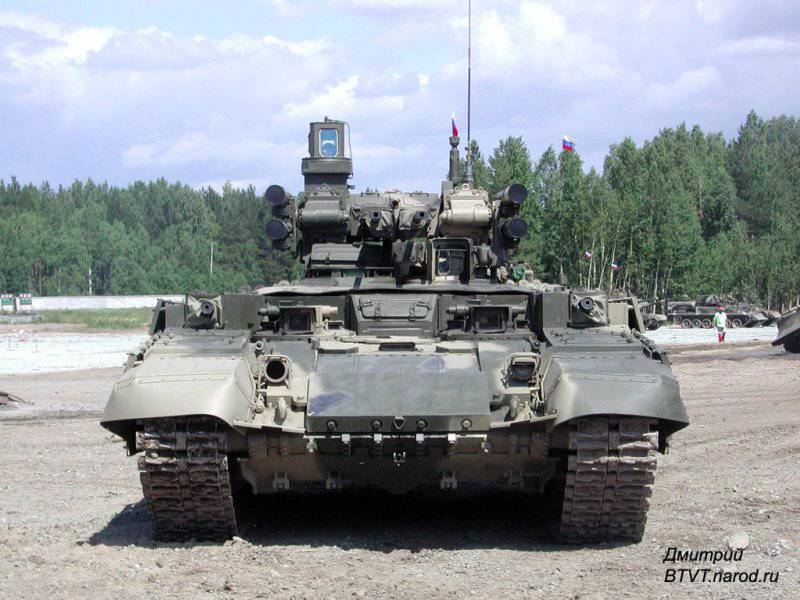 For the first time, Russia presented several full-scale samples at the international exhibition and conference of armaments and military equipment (IWT) for all branches of the armed forces of Africa Aerospace and Defense-2012, which took place on 19 – 23 in September in South Africa.

Support combat vehicle demonstration tanks BMPT and the modernized T-72 tank became the main event of the cabin. Rosoboronexport, in addition, prepared a special presentation for the exhibition ZRPK "Shell-C1." It was demonstrated to foreign delegations on the screen of the interactive exhibition complex (CPI), which has been actively developing since 2011 and is very popular at international arms and military equipment exhibitions. During the presentation, real situations of the combat use of the Pantsir-C1 air defense missile system are shown and the tactical and technical characteristics of this world-famous complex are given.

Russia has been participating in the largest African arms review since 2000. In total, at an exhibition in South Africa, the company presented its partners with information on more than 200 samples aviation, land and naval equipment, air defense systems, as well as various simulators. “The exhibition in South Africa is the largest on the continent, it plays an extremely important role in strengthening our position in Africa. This year we have a very busy schedule of meetings on all topics - air defense, aviation, land and marine equipment. We expect the exhibition to be very productive, ”said Alexander Mikheev, Deputy General Director of Rosoboronexport OJSC and head of the joint delegation of Russian Technologies State Corporation and Rosoboronexport OJSC.

An important factor in the promotion of military products manufactured in the Russian Federation in the region is the extensive experience of operating Soviet and Russian weapons and military equipment in many countries of the continent. They have proven themselves in difficult climatic and geographical conditions. In addition, a significant number of specialists, including the command team, have been trained and continue to study in military schools of the Russian Ministry of Defense.

Rosoboronexport pays special attention to upgrading previously delivered samples, especially with regard to armored vehicles and air defense systems. Russia offers comprehensive modernization programs that at a relatively low cost will provide a significant increase in the combat capabilities of the equipment. Another, no less relevant topic is the creation of service centers for servicing equipment, in particular helicopters. Their organization will not only increase the efficiency of work, but will also contribute to the creation of highly skilled jobs. The issue of establishing helicopter maintenance centers is being discussed with many countries. With a number of states, in particular with South Africa, Rosoboronexport OJSC is working on projects for R & D and the joint development of new types of military products. There is great potential in this regard in the area of ​​radar systems and rocket engines. “We remain one of the few countries that can offer the most diverse areas of cooperation, be it space programs, the supply of all types of equipment and weapons or the joint development and creation of new models. According to the “cost-effectiveness” criterion, we still offer the most optimal solutions in the region, ”noted Mikheev. An additional impetus for the development of military-technical cooperation with African countries was a series of visits by the President of the Russian Federation to South Africa (September, 2006), Egypt, Angola, Namibia and Nigeria (July, 2009).