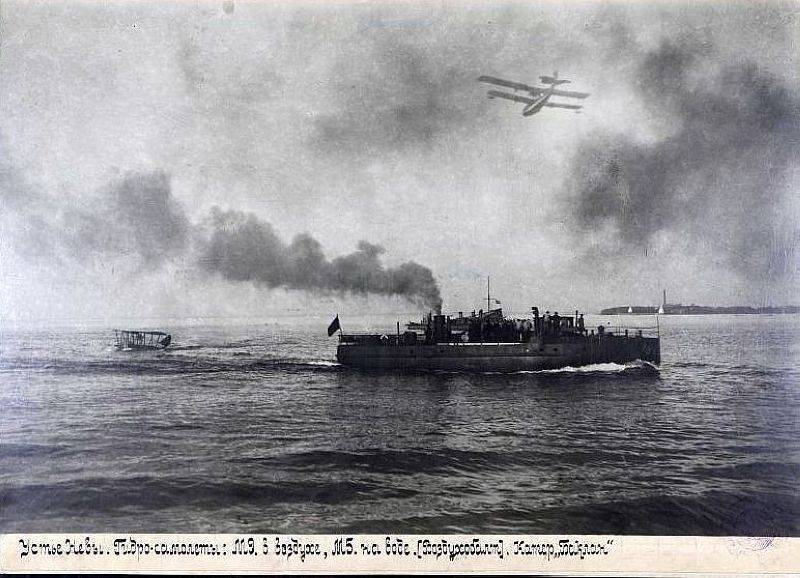 Mouth of the Neva. Seaplanes M-5 on the water, M-9 in the air and the boat "Baklan", photo: goskatalog.ru
Dmitry Pavlovich Grigorovich, together with Igor Ivanovich Sikorsky, were outstanding aircraft designers of their time. Both designers were born in Kiev, but after the revolutionary events of 1917, their life paths diverged dramatically. Dmitry Grigorovich remained in the Soviet Union, while Igor Sikorsky emigrated to the United States.


In the USSR, Dmitry Pavlovich Grigorovich continued to work in the area in which he had achieved success back in the Russian Empire. The aircraft designer stood at the origins of the domestic hydroaviation, creating a whole series of successful flying boats. In addition, Grigorovich created the first serial Soviet fighters and managed to work closely with another outstanding Soviet aircraft designer, Nikolai Nikolaevich Polikarpov.

Grigorovich fell ill with aviation back in Kiev

Dmitry Grigorovich was born in Kiev in 1883 in the family of a sugar factory manager and the daughter of a zemstvo doctor. Before the outbreak of the First World War, he managed to get an excellent education. After graduating from a real school, he studied at the Kiev Polytechnic Institute, after graduating from which in 1909 he studied at an institute in Liege for at least a year. Even at the institute, Grigorovich began to take an active interest in aviationwhich is rapidly gaining popularity.

Grigorovich studied at the Kiev Polytechnic Institute at the same time as another outstanding designer Igor Sikorsky, the future creator of the famous Russian Knight and Ilya Muromets aircraft. The designers took their first steps in aviation literally in the neighborhood. 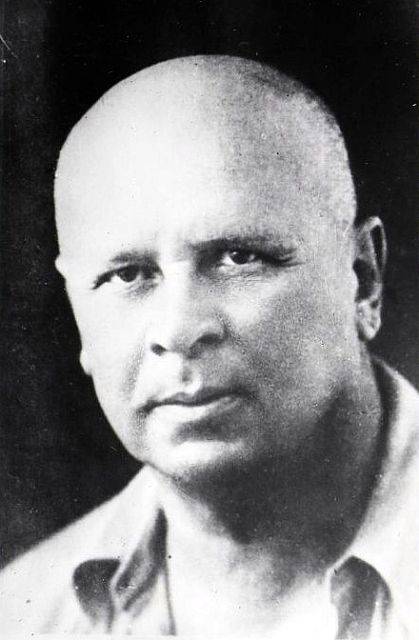 Dmitry Pavlovich Grigorovich, photo, 1930s, goskatalog.ru
Grigorovich made his first attempt to create his own aircraft in Kiev. The first airplane, which the designer unpretentiously designated "G-1", was assembled literally in a barn from what was at hand. Finish this aircraft, which was planned to be equipped with a 25 hp engine. s., Dmitry Grigorovich could not because of the lack of necessary funding.

In 1911, Grigorovich moved to St. Petersburg, where for some time he was engaged in journalistic work, published the journal Aeronautics Bulletin. But already in 1912, Dmitry Pavlovich became the technical director of the plant of the First Russian Association of Aeronautics Shchetinin and Co. Grigorovich became technical director a month after working at the enterprise, so much his knowledge in the field of aviation impressed the owners of the plant.

In 1913, the Donnet-Lévêque flying boat accidentally entered the factory, which needed repairs to the bow. This particular case had a huge impact on the whole life of Dmitry Grigorovich, who thoroughly studied the design of a flying boat and fell ill with hydroaviation. Even before the start of the First World War, Dmitry Pavlovich managed to make his own model of a flying boat, which received the designation M-1 (“Sea First”).

Grigorovich rethought the very idea of ​​a seaplane

The damaged French seaplane Donnet-Lévêque Grigorovich dismantled literally to the screw. The work done prompted the designer to the idea that the Europeans make one important mistake - they take an ordinary airplane and install it on a float chassis. In turn, Dmitry Grigorovich realized that the "flying boat" in the first place should be just a boat. 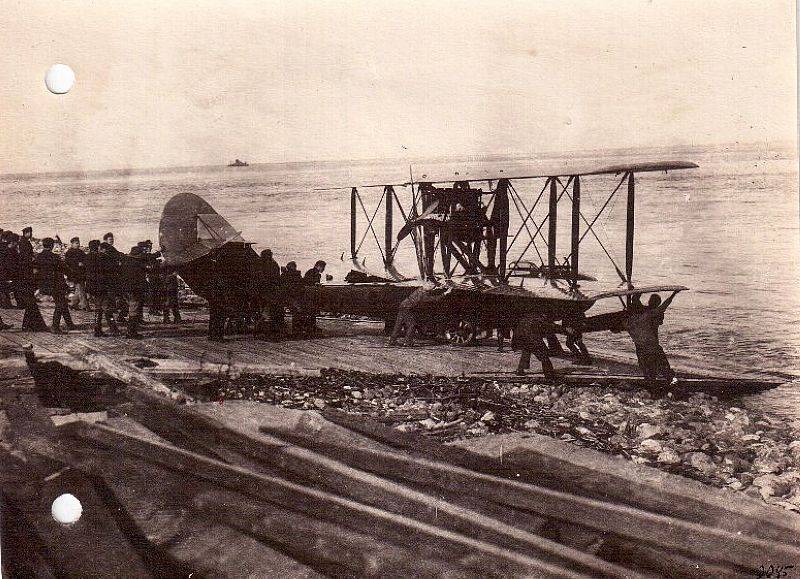 Launching the M-5 flying boat, 1923, photo: goskatalog.ru
Based on the findings, Grigorovich created his own hydroplane drawings. In the project he proposed, the seaplane fuselage was built according to the type of sea vessels. By the end of 1913, the designer presented the first designs of his flying boats, which he continuously improved. The fifth version of the seaplane, which appeared already during the war years, became truly successful. The previous models M-1, M-2, M-3, M-4 did not suit Grigorovich with either their seaworthiness or insufficient flight characteristics.

But the flying boat of the fifth modernization completely satisfied both the designer and the sailors. The M-5 flying boat was ready in early 1915. The double wooden biplane was so successful that it outlasted the empire. Serial construction of the M-5 continued until 1923. The take-off surface for the M-5 flying boat could be any water surface, the only limitation was the wave height - no more than half a meter.

Seaplane-mounted 100 hp engine. from. allowed to fly at speeds up to 105 km / h, the maximum flight altitude reached 3 meters, and the flight duration - up to 300 hours. With a total weight of 4 kg, the M-960 flying boat, which entered service with the Russian fleet as an artillery spotter and reconnaissance aircraft, she could take on board more than 300 kg of payload.

On April 12, 1915, the M-5 flying boat performed its first combat flight. Subsequently, boats of this type were used in the Black Sea and the Baltic, including for bombing attacks on enemy targets. The plane could take up to two 160-kg bombs on board. In addition, the seaplane had a 7,62 mm Vickers machine gun, so that the pilot and reconnaissance aircraft, located side by side in a large cockpit in front of the fuselage, could also conduct air combat with the enemy.

Grigorovich's flying boats fought in the Black Sea and the Baltic

Grigorovich's flying boats turned out to be most welcome, and already at the height of the war they were put into serial production. In 1916, one of the most famous episodes of the First World War took place with their participation. On February 6, 1916, 11 Russian M-5 flying boats immediately took off to bombard the Turkish port of Zonguldak. Aircraft dropped 38 bombs on the port, sinking a large coal transport and several cargo sailboats. 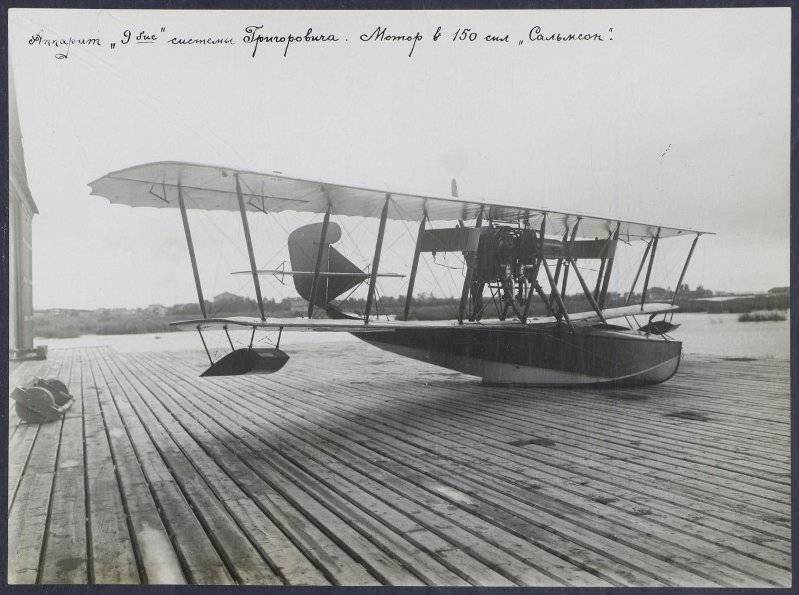 Flying boat M-9, photo: goskatalog.ru
The raid, which lasted a total of 20 minutes, ended successfully, with all 11 seaplanes returning to base. The air attack on the port itself showed that seaplanes were becoming a formidable military force. In the same year, an entire aviation division was already operating in the Black Sea, the fleet included 32 seaplanes and four air transports.

Grigorovich continued to improve his flying boats. The next successful project was the larger seaplane M-9. Grigorovich himself characterized the "nine" as a heavy seaplane, which was a biplane with a pusher engine located in the rear of the fuselage. The M-9 flying boat received a more powerful 160-horsepower French engine, which increased the aircraft's performance. Also, this flying boat received a more durable fuselage. Strengthening the fuselage allowed the M-9 seaplane to land even in a snowy field. Following the projects of the M-5 and M-9 boats, other successful projects followed.

For example, the first seaplane fighter M-11, built in a series of 61 cars. This seaplane, which began to be assembled in July 1916, was armored for the first time in the form of steel plates 4–6 mm thick. At the same time, in 1916, the M-81 reconnaissance flying boat was launched in a large series of 15 aircraft.

The joint project of Mikhail Shishmarev and Dmitry Grigorovich stood apart in this military work. It was the world's first naval torpedo bomber - a special-purpose hydroplane (GASN). The implementation of the project in 1917 was prevented by the October Revolution that began in Russia. Before the start of the revolutionary events, the fleet planned to purchase 10 of these seaplanes, but in reality only one was built, which was damaged during the tests. 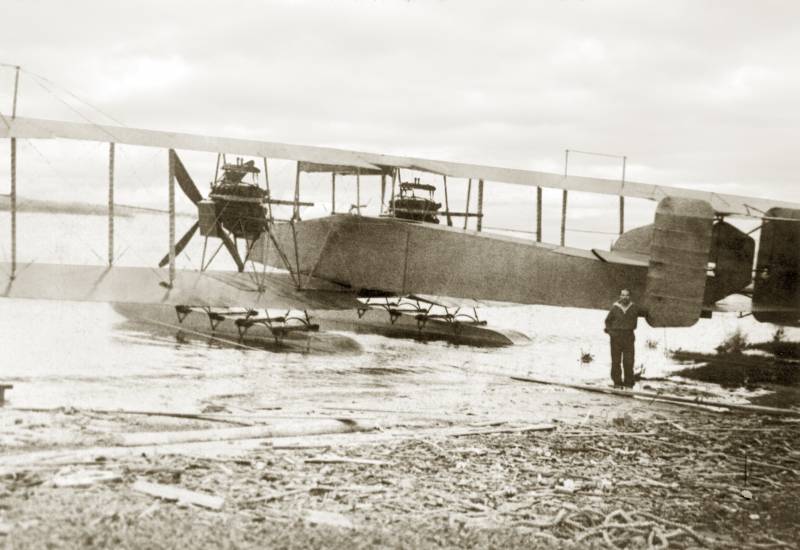 Torpedo bomber GASN M. M. Shishmarev and D. P. Grigorovich. Petersburg, 1917, photo: wikimedia.org
It was planned to install two Renault engines with a capacity of 250 liters each on a biplane torpedo bomber. from. every. A naval torpedo bomber on a float chassis could take on board one torpedo or bombs weighing up to 480 kg. The crew of the aircraft consisted of 3-4 people and included two gunners who were supposed to protect the front and rear hemispheres of the aircraft.

Despite the failure with the GASN, all Grigorovich's flying boats during the First World War, especially the M-5, M-9, M-11 and M-15 seaplanes, proved to be the best, literally falling in love with the sailors. On the Black Sea, Grigorovich's flying boats were used to bombard Turkish ports, on the Baltic Sea they participated in covering amphibious assaults, and also attacked German ships and fought air battles with German aircraft.

Creator of the first Soviet fighters

The creator of domestic hydroaviation had a hand in the appearance in the USSR of the first fighters of his own design. Having moved to Moscow in 1922, Grigorovich headed the design bureau of the GAZ plant No. 1 (the former Dux plant). Here Dmitry Grigorovich implemented the project of the first Soviet fighter of his own design - I-1 ("first fighter") under the Liberty engine with a capacity of 400 liters. from. I-1 was produced in a single copy, but for its time the aircraft was a landmark.

On the basis of the I-1 project, which fell short of the tactical and technical characteristics required by the military, Grigorovich created the I-2 fighter, this time choosing a biplane layout. After modernization and fine-tuning, the aircraft under the designation I-2 bis was put into mass production. In total, 211 fighters of this type were produced in the USSR. Of the subsequent aircraft, the projects of Grigorovich's I-Z and IP-1 fighters also reached the assembly line. At the same time, IP-1 became the last aircraft of Dmitry Pavlovich, which was mass-produced. 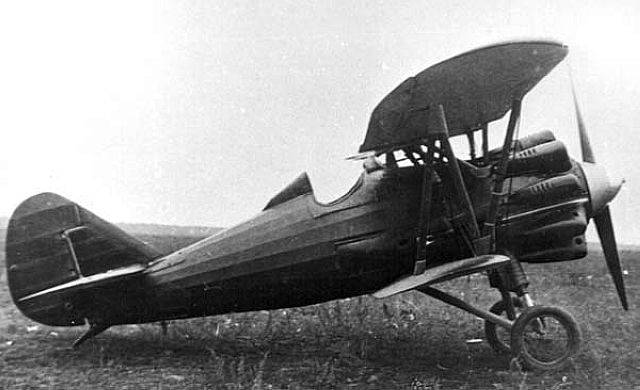 Fighter I-5, photo: wikimedia.org
The last period of the designer's life contained unpleasant events. He became a victim of a campaign unfolding in the country to combat old specialists, "bourgeois elements" and "eliminate wrecking in production." On August 31, 1928, Grigorovich was arrested by the OGPU and on September 20, 1929, he was convicted by the Collegium of the OGPU of the USSR under article 58, part 7 of the Criminal Code of the RSFSR, receiving 10 years in a forced labor camp.

The outstanding Russian and Soviet designer did not leave for the camp; from December 1929 to 1931, Dmitry Grigorovich worked in the Butyrka prison, where the so-called “sharashka” was organized, in the future TsKB-39 of the OGPU. Here Grigorovich began to work together with Nikolai Polikarpov, who was arrested by the OGPU in October 1929. In fact, Grigorovich was the head of TsKB-39, and Polikarpov was his deputy.

In April 1930, together with Polikarpov, Grigorovich created a fairly successful I-5 fighter. This Soviet one-and-a-half fighter went into a more serious series - a total of 816 aircraft were produced, including three prototypes. At the same time, the successes of Soviet designers were noticed at the very top. 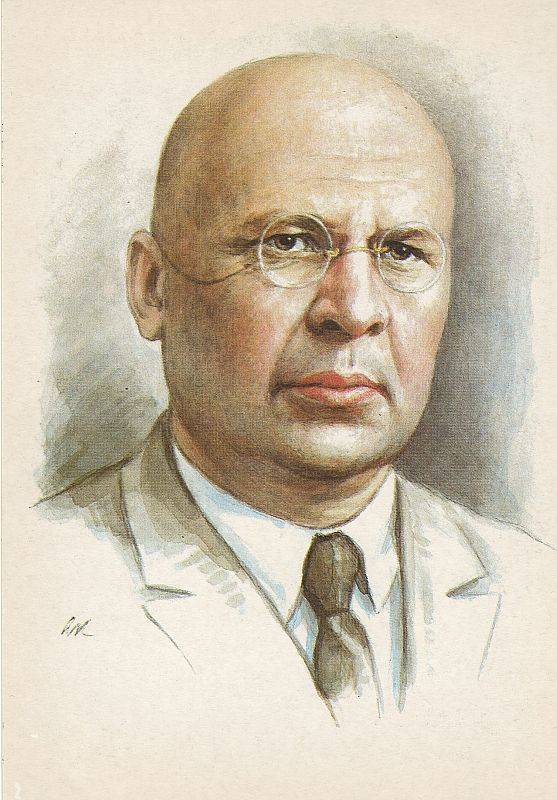 Aircraft designer Dmitry Pavlovich Grigorovich, 1989 postcard, image: goskatalog.ru
The outstanding aircraft designer died on July 26, 1938 at the age of 55 after a serious illness, the designer had blood cancer. He was buried in Moscow at the Novodevichy Cemetery.