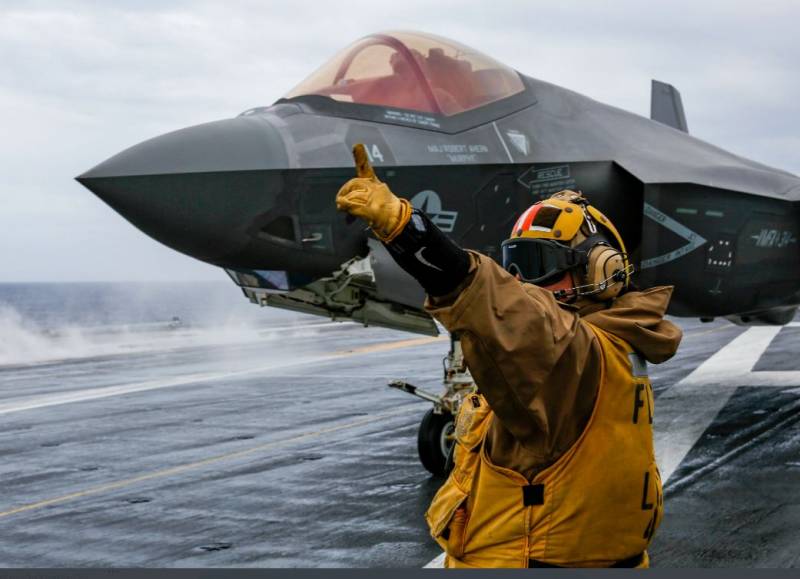 The crash of an F-35 aircraft into the South China Sea during landing on an aircraft carrier, when the pilot managed to eject and escape, became a real headache for the US Navy. aviation Navy. After all, the F-35C could fall into the hands of the Chinese military. The pilot himself was lifted out of the water by a military helicopter, but now the US military expects to lift the fighter as well.


The US Navy has launched an operation to search for the F-35C that fell into the sea so that China does not get its wreckage.

Official representative of the 7th fleet US Navy Lieutenant Nicholas Lingo announced the upcoming start of the operation to raise the aircraft.
According to the Navy, the incident occurred during normal flights involving a fighter. Due to the incident, seven sailors on board the aircraft carrier were injured and required medical attention. The injured were taken to a hospital in the Philippine capital Manila.

According to some experts, the main goal of the operation to lift the aircraft is to prevent it from falling into the hands of China. The wreckage of the aircraft could be of great interest to the Chinese, as they will receive information about the technologies used in the F-35. Therefore, the US military is going to involve all available forces and means for the search operation.

There is no doubt, says Carl Schuster, former head of operations for the US Pacific Command's Joint Intelligence Center in Hawaii, that China will try to investigate the crash site with its submarines and deep-sea submersibles.

In this regard, the Americans need to act as quickly as possible. China may claim the right to conduct a search operation, referring to its territorial claims in the South China Sea. Beijing may cite the danger of the aircraft to the environment, as well as oppose the use of foreign military equipment in the nearby waters of the South China Sea.

Meanwhile, US Navy carrier strike groups began naval exercises in the South China Sea over the weekend. Ships and aviation carry out well-coordinated surface and air operations. Earlier, an aircraft carrier group led by the Abraham Lincoln was deployed in the area. The first squadron of F-35C Lightning II strike fighters of the Marine Corps is assigned to it. The F-35 landing failure was the second incident in less than a month. On January 4, an F-35A aircraft belonging to South Korea was forced to make an emergency landing due to a malfunction of the landing gear.