Ukrainian tank protection systems want to use in NATO

21 September 2012
50
The other day, the plant to them. Malysheva manufactured and shipped four to the USA tank T-80UD. According to Defense Express, a representative of the Ukrainian tank building industry, armored vehicles have different equipment and protection systems. In particular, three tanks are equipped with the latest Ukrainian development - a complex of built-in dynamic protection with “Knife” modules, which makes it possible to defend against all types of anti-tank weapons, including the most formidable - armor-piercing projectile. One tank was shipped to the United States “naked” - without dynamic protection. 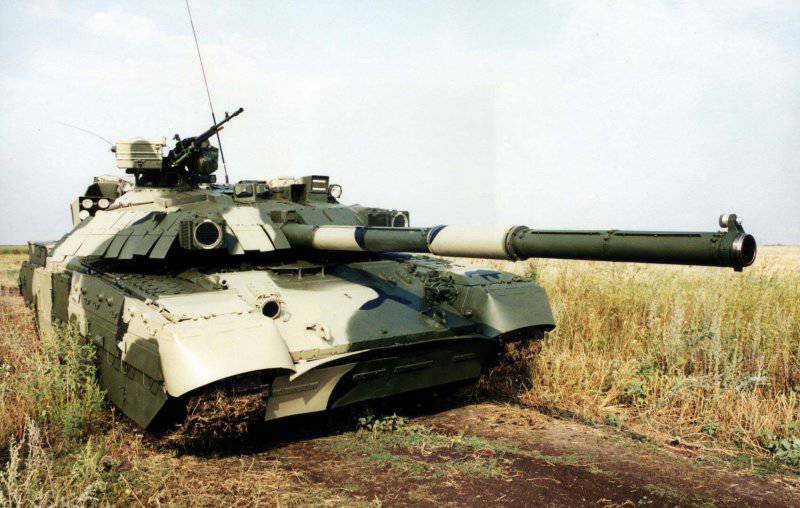 Negotiations on the purchase by the US military of Ukrainian tanks have been under way for more than two years. For the first time, the possibility of the acquisition by the United States of Ukrainian heavy armored vehicles became known in March 2011. After negotiations in Washington, former Ukrainian Defense Minister Oleksandr Kuzmuk with the then head of the US defense department, the press service of the Ukrainian Defense Ministry said that William Cohen had expressed interest in acquiring some samples of Ukrainian armored vehicles. technology. New tanks are located both in the Armed Forces of the country, and can be quickly released by the Kharkiv Plant. Malysheva, who has the right to independent trade weapons. However, the then CEO of the company, Grigori Maliuk, was biased towards the American proposals. He, in particular, said that Americans are purchasing two or three copies of expensive equipment in various countries of the world to work out means of destruction. The director rejected the proposal to put the tanks as targets. “We are poor but proud, and for the time being we are not going to it. Because we believe that this is a matter of prestige, and in addition, it is possible that certain properties of the machine will be disclosed, ”G. Maluk emphasized.

After that, there was a lull. True, at the end of 2011 in the state-owned company Ukrspetsexport they began to believe that the sale of Ukrainian tanks to the United States would in no way harm Ukraine’s defense capability. On the contrary, experts are confident that testing Ukrainian cars in the conditions of using military weapons will demonstrate the high potential of the national school of armored vehicles. And open up some new markets. After all, the recognition of weapons is possible either after it is “run in” by a real war, or as a result of a real comparison with similar weapons. The fact of the sale of tanks, according to a number of military experts, indicates the confidence of Ukrainian developers that the machines will withstand the stated characteristics. In addition, in modified versions, this tank also participated in tenders for the rearmament of the armies of Greece, Turkey and Malaysia.

13 in May 2012 at a briefing in the press service of the Ministry of Defense, the head of the Armed Forces of the Armed Forces of Ukraine, Colonel-General Alexander Stetsenko confirmed that, since last year, the American company has been negotiating with the Kharkiv Plant. Malysheva on the purchase of ten tanks T-80. At the same time, he noted that there is no objection from the Ukrainian defense ministry regarding this purchase. While in the United States, the State Secretary of the Ministry of Defense of Ukraine on international cooperation, Colonel-General Viktor Banny said that the Kharkov Tank-Building Plant is ready to implement such a contract.

In June, 2012 representatives of Ukraine and the United States decided on which tanks and at what price will be produced in Kharkov. As told by Defense-Express, an informed source close to the Ministry of Industrial Policy of Ukraine, it was about the release of new Ukrainian tanks of various modifications.

Now, when the supply of tanks in the United States still took place, we can draw some conclusions.

Firstly, Ukrainian tanks can be used at American ranges for training combat operations against a conventional enemy. In the USA, there are two ranges where such activities are practiced. However, one can hardly say that Americans are interested in how to improve the ammunition for the defeat of the Ukrainian T-80UD tank. Similar armor was used in the production of T-72, which from 1979 under license began to be manufactured in Poland, and then in Yugoslavia (under the trademark M-84), Czechoslovakia, India and Iraq. Therefore, these US tanks could get in the former states of the Soviet bloc or in the same Iraq.

But, judging by the complete set of tanks installed in the US, it can be assumed that the US military is not at all interested in how to penetrate the armor of Soviet tanks and thus manufacture a new ammunition. Many experts are confident that the US is interested in a new Ukrainian development - the Knife series of dynamic protection. Considering that three out of four vehicles are equipped with this protection, the US military wants to see firsthand the difference in how a protected tank behaves compared to an unprotected one. If the Ukrainian defense "Knife" is as good as its designers say, then it is possible that the US will buy it to protect its tanks, and in the future, perhaps for armored personnel carriers. After all, the war in Iraq showed the vulnerability of American tanks, which were considered the most impenetrable in the world. 28 August A projectile of unknown origin struck on one side of the 100-mm armor of the 69-ton tank, went through the gunner’s seat, and went into the opposite direction on the 50 mm. In addition, the turret control system was damaged, due to which the tank was disabled. At the beginning of the Iraq war, one tank was also damaged by an RPG-7 grenade launcher. Judging by the nature of the damage, which was published in the American newspaper Defense News, 28 August, an American tank also became a victim of a projectile fired from an RPG-7 grenade launcher.

For Ukrainian developers, the benefit of the deal is also obvious. She is by no means financial. The fact of buying and analyzing the development will certainly serve as a good advertisement for Ukrainian technology. The chief designer of the Basic Center for Critical Technologies "Microtech", Professor Vasily Khitrik claims that the complex of built-in dynamic protection with the Knife modules helps protect against all types of anti-tank weapons, primarily armor-piercing, which none of the previous protection does. “Moreover, the defense will withstand a Soviet and NATO armor-piercing sabot with 100 meters. This is the only defense that allows you to protect yourself from shock nuclei, ”he stressed. According to him, the basis of this protection are cumulative knives, which in one box can be up to seven units. When a projectile gets into the box, they trigger and tear the ammunition into pieces. Protection is effective against both Soviet and Western ammunition.

Today, in the world, only the Israeli tank Merkava is equipped with the dynamic defense of the old Soviet type, the French are only preparing to install the dynamic protection on the Leclerc tank. As V. Khitrik noted, the Russian research institutes have become five years behind Ukrainian developers in creating a new type of protection.

Therefore, Ukraine turned out to be in fact the only country in the world that possesses a new unique defense, which, moreover, has already been adopted. In addition, an active defense called “Barrier” is being developed in the country, to which the United States is also showing interest.

The interest of Americans in defense is explained not only by the intention to increase the reliability of their impenetrable tanks. It is known that the United States began work on creating more promising tanks of the future, the main characteristics of which are increased mobility and firepower. These machines should become lighter, which means they should have a thinner armor. And since it is necessary to fight on the battlefield, obviously, with real tanks, these promising tanks need a new defense that will not make them heavier. Such a solution could be dynamic and active protection offered by Ukrainian developers.

The question now is only that the specifications declared by the Ukrainian designers be confirmed at the American test sites. For Ukraine, such a deal could be a confirmation that in the world it is Ukrainian tanks that remain among the most popular.