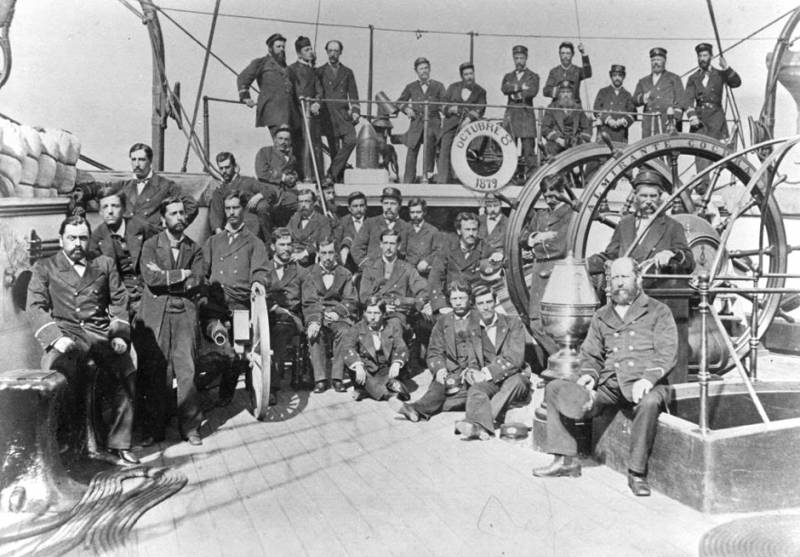 The outcome of any war is determined by money, money and again money, and Chile was clearly better with this, they had agreed in advance with Great Britain. The result was the appearance of two new battleships among the Chileans:

For the Peruvians, everything was much sadder - their main strength was the "Huascar" seaworthy monitor, also of British construction, was no longer young, little adapted to the open sea, and disgustingly armed, with two 254 mm guns in the turret. There was also its peer - the battery battleship "Independencia", but the Peruvians managed to lose it at the beginning of the war. Two more monitors from the American Civil War were non-seaworthy and could only serve for base defense.

As a result, it turned out two by two, but at the same time the Chileans were younger and more modern, and the training of the gunners ... The Huascar, a ship undoubtedly heroic, had fired extremely rarely and extremely poorly throughout its career. The plus for the Peruvians was perhaps the commander - Don Miguel Grau was an adventurer and brave, which surpassed his Chilean colleagues by a head.

Why such attention to the sea? And Chile and its opponents were critically dependent on supply from outside and weapons, and supplies. In addition, the logistics of the war relied on shipping, and whoever controls the sea will win.

The Chileans started, and they started well:

“On February 14, 1878, the National Assembly of Bolivia passed a law abolishing tax incentives for Chilean companies and recovering from them all tax arrears over the past years. In response, the Chilean government introduced its troops to the territories inhabited by Chilean citizens, and the fleet blocked all major Pacific communications. "
Bolivia and Peru responded by declaring war with no other choice. The initiative at sea was for the Chileans, who carried out the bombing of the port of Iquique in April 1879, and then set off for the same purpose in Callao, leaving only two old wooden ships for the blockade of Iquique. The Peruvians went to sea and the first naval battle of this war took place - Don Grau's Huascar sank a wooden Chilean sloop, ramming it. At the same time, Chile found its national hero - the commander of the sloop, Captain Arturo Pratt, rushed to board the battleship during the ram, but only two sailors followed him, with a completely understandable result.

True, the victory did not work out - the sloop "Covandonga" lured the Peruvian battleship "Independencia" to the reefs, after which the Peruvians burned their most powerful ship.

After the exchange of the battleship for a wooden sloop, it would seem that the fate of the war at sea was decided, but what happened for the next six months did not fit into logic and common sense - Miguel Grau, who became a full admiral and commander fleet, turned his old monitor into a cruiser and did literally what he wanted at sea.

The culmination of the Peruvian cruising war was the capture of the Rimac steamer with a cavalry regiment on board, although only 260 men, but still. In total, the Huascar sank 16 Chilean transports, captured five and recaptured two Peruvian ships. At sea, the monitor reigned, which became a cruiser, and all attempts to chase him with two powerful battleships ended in nothing. The high-tech of that war ended in nothing, given that the Chileans had four destroyers, the Peruvians had three and a muscular submarine, no significant results could be achieved. The fate of the war was decided by the big guns, and the Peruvians, despite all the successes of don Grau, did not have a chance.

There was no, because luck is not eternal, because the cars of the not new Huascar were slowly wearing out, because the crew was tired, and there was no replacement. Strength she always hits the class, so it happened this time, however, only in October 1879, when the Chilean squadron still clamped the Huascar, shot it with guns, from one of the shells Miguel Grau died, and the monitor that lost its combat capability, the hero of the battle with by the British, winner Arturo Pratt, one of the best cruisers in the naval stories, lowered the flag. After gaining control of the sea, the rest was a matter of technique.

"On November 2, the Chileans landed a large (10 men) landing force north of Iquique, cutting it off from Peruvian territory."
And not only landed, but uninterruptedly supplied. Added chaos on land and the presence of two armies (Peruvian and Bolivian, each with its own command), and the organization of the Peruvians, when the army was recruited from separate detachments, which can not be called regular. And it didn't even come close to the coast, Chilean ships were cruising at sea.

And then there was agony, the Bolivians retreated to the mountains, and the Peruvians, retreating step by step, even lost their capital - Lima, where Chile formed a puppet government. But the Peruvians themselves continued the war in partisan form, and as a result, in 1883, peace was concluded. Chile received its guano in full. But Bolivia has lost access to the sea, which still causes terrible phantom pains there, and real economic problems. The export of their minerals is very difficult for the Bolivians. Peru was left without southern provinces and naval ambitions.

Chile received huge incomes until the beginning of the 20th century, until the Germans learned to synthesize sodium nitrate from the air. True, copper was also found in the recaptured lands, but this is a completely different story.

The Unlearned Lessons of the Guan War

In fact, there were many conclusions for those who wanted to make them, for our era they are rather trivial, but then:

1. In the event of a war between the naval powers, without domination at sea, victory is impossible, which will be confirmed later by all subsequent wars.

2. The era of battering rams is a thing of the past. Heavy damage to your ship is not worth a sunk alien, and if the enemy keeps the minimum speed and composure, nothing will come of it, and if not, why? Boarding is also sent there, one canister will put the entire boarding party. However, this did not prevent them from continuing to build rams, or preparing for boarding for many years to come. The same "Nicholas I" will eventually serve in the Japanese fleet until 1915, although at the time of its construction in 1891 it was already clear that an extra tower is more important than the ability to deliver a ramming strike.

3. Cruising operations do not require specially built cruisers, but skill, composure and an adventurous streak. At the same time, it is impossible to win the war by cruising operations, they only delay the inevitable end, which did not prevent the Germans from building a fleet of ships by the beginning of World War II, suitable mainly for cruising operations.

4. Monitors are not suitable for a full-fledged war, their era passed in a short period when armor was stronger than cannons. This, however, was just taken into account, and they stopped suffering from a rather specific class of ships.

5. New types of weapons are good, but having neither tactics nor handling skills, there is little sense from torpedoes, submarines and destroyers. The Chileans, for example, used their own for reconnaissance, while they lost one at the time of the sinking of the Peruvian launch, from their own mine. And they have a specific niche, not replacing the entire fleet.

6. The fate of the war can be decided by amphibious operations.

If you look at Russia in this context, then we have diligently danced on every rake. And for decades they were preparing for a cruising war, and became overwhelmed by new types of naval weapons, and underestimated the role of the fleet, and missed the Japanese landing operation near Port Arthur, not really preparing to repel it ... As a result, a similar result came out. However, we are not alone, the same Wilson devoted only a piece of the chapter to this war, without any conclusions and generalizations, it has always been Eurocentrism.

And in Chile, the legendary Huascar still stands as a monument, for them that war, with one hundred thousand dead, is the largest conflict in the region up to the present day. And the memory of Admiral Grau is kept by all sides of the former conflict, he is called Caballero de los Mares and Gran Almirante del Perú (knight of the sea and great admiral of Peru).