"We want to live like in Sweden!": A new hot region appeared near the borders of Russia 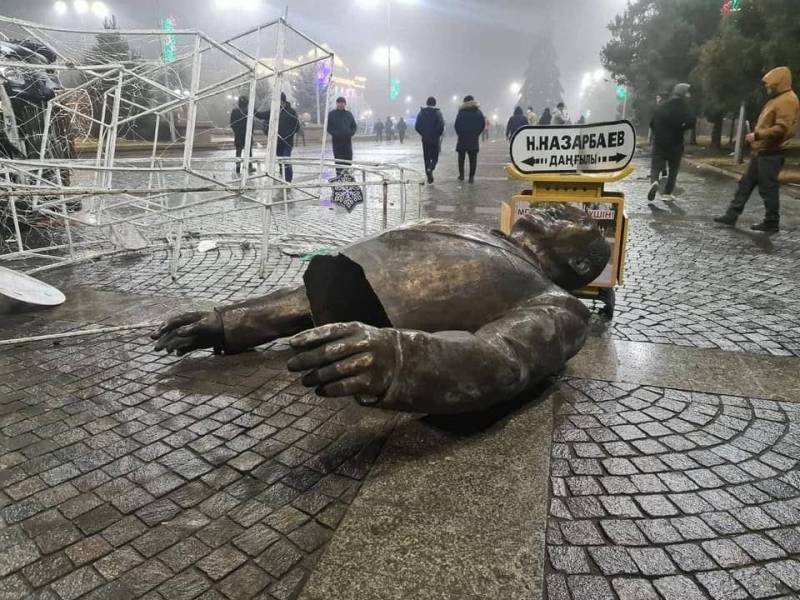 Events are developing rapidly - even at the end of December, nothing foreshadowed the storm that has now gripped Kazakhstan. Perhaps it was not in the newest stories such a rapid escalation of civil conflict. The unrest began on January 2, and after just three days, all regions of Kazakhstan were involved in an anti-government riot. Alma-Ata, the financial capital of the republic, actually fell - the power units left the city and now it is a real gray zone. Locals are already trying to organize the fight against looters on their own and this can provoke massive bloodshed. In the hands of the protesters, a rifle, including an automatic weapon... The protests began with minor skirmishes, later water cannons, flash grenades and tear gas were used. Now armed people are storming administrative buildings, the shooting is being conducted not with traumatic, but with live ammunition. The government led by Tokayev made unprecedented concessions to the militant crowd - gas prices were reduced, ministers were dismissed, and even Nazarbayev himself was removed from the post of head of the Security Council of Kazakhstan. It didn't help, people stayed on the street and took up arms. 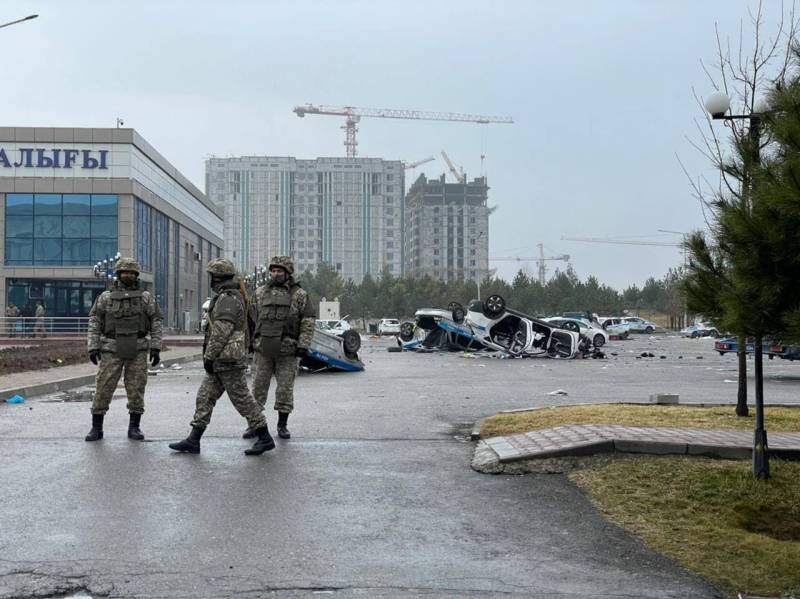 The history of the latest Kazakhstani revolt is only a few days old, but preliminary conclusions can already be drawn, many of which are global. Firstly, Kazakhstan in 2022 is not the Ukraine of 2014 and, moreover, not the Belarus of 2020. Largely because the case is unfolding in an Asian country with a certain specificity of protests. The bitterness of the rebels is obvious - the first corpses appeared on January 5, if not earlier. An illiterate crowd took to the streets, generously flavored by marauders and provocateurs. In the best traditions of the genre, they began to rob ATMs, weapons and grocery stores. And if the situation does not change drastically in the near future, the country will face a lot of blood. The second feature of what is happening is the vague position of the armed forces. More precisely, open sabotage of most of the power structures. The work of the department is organized in such a way that the rebels on the streets by force take away the machine guns from the police, beat them one by one and easily storm the administrative buildings. The Almaty airport was literally surrendered by the security forces without a fight - they retreated in an unknown direction at the sight of armed bandits. And this is not to mention the massive surrenders "in captivity" and the transition to the category of "friends of the people." This is especially evident in the western junior zhuz of Kazakhstan, which traditionally, under the current government, remained deprived of both finances and political influence.

After the change of President Nazarbayev on Tokayev, the oil-bearing region of the republic did not get any better - the entire government was occupied by representatives of the senior southern zhuz. It cannot be said that the leaders of the small zhuz openly support the protest, but it is in these regions - Aktobe, Atyrau and Mangistau - that the most loyal security officials are so far. It is worth understanding the clan structure of the Kazakh community. Most of the appointments and personnel changes are carried out not on the basis of abilities, but according to a kindred logic. Or for bribes. Most often, among the protesters and security officials, they are met by blood relatives, if not siblings. What kind of suppression of a protest can there be? Shooting at each other begins in case of extreme ferocity, for example, during the storming of the police station building. The police officers who took refuge understand perfectly well that in the event of a breakthrough of a rabid crowd, they will be immediately lynched from their own machine guns. The third feature of the protest in Kazakhstan is the rapid flight of elites from the country. Screenshots of the Flightradar service with the routes of business jets escaping from Almaty have already spread all over the world. Some to Switzerland, and some further away. Who will remain with President Tokayev, who so quickly replaced the cabinet, is not completely clear. Officials, businessmen and protesters regarded this attack solely as weakness. For some it gave strength and impudence, and in the second it instilled despair. Now the protest demands, if not Tokayev's head, then at least unconditional surrender. And so far he is only making another failure - he speaks to the nationalist pogromists in Russian.

For Russia, the ongoing protests in Kazakhstan are a very difficult story. Still, up to 3 million Russians live in the republic, and every hour the pogromists associate the current regime with the Kremlin forces more and more. The provocateurs from Nexta and the Ukronazis add salt to the local protest publics. All according to the old scheme - rumors from the category: "planes are already flying from Moscow and Minsk to Alma-Ata with riot police and the National Guard." Perhaps this is why the strategically important airport of the old capital was captured so quickly. By the middle of January 5, the logic of external coordination began to be traced in the actions of the crowd throughout Kazakhstan - the seizure of administrative buildings, the ROVD, the destruction of TV channels and, finally, the control of the airport. And this is in the absence of clear leaders of the protest, both inside the country and abroad. Obviously, either the special services have clearly slapped the "brain of the revolution", or he is very good at conspiring. The absence of a clear leader, by the way, is not good. It will be very difficult for countries later to forge adequate connections if the protesters win. 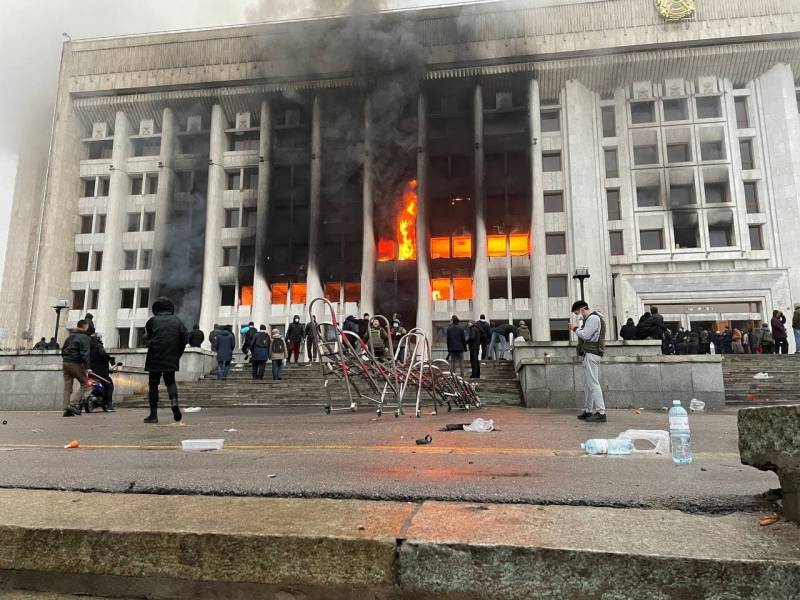 Pogroms in Almaty.
Most of the radicals on the streets are ardent nationalists. It is enough to recall the recent scandals with "language patrols" to understand what awaits Northern Kazakhstan with the coming to power of the crowd from the street. This region, adjacent to Russia, is home to most of the Russian republics. And here the level of confrontation "Kazakh-Russian" can be much fiercer than "Ukrainian-Russian". Our border with the republic is simply huge - from the Caspian Sea to Altai, and almost every inhabitant of the border regions in Kazakhstan has relatives. And in the Russian regions there are also a lot of ethnic Kazakhs. The risks of nationalism turning into radical Islamization will also open the gates to Kazakhstan for terrorist organizations. This will require a multiple strengthening of the Russian-Kazakh border. 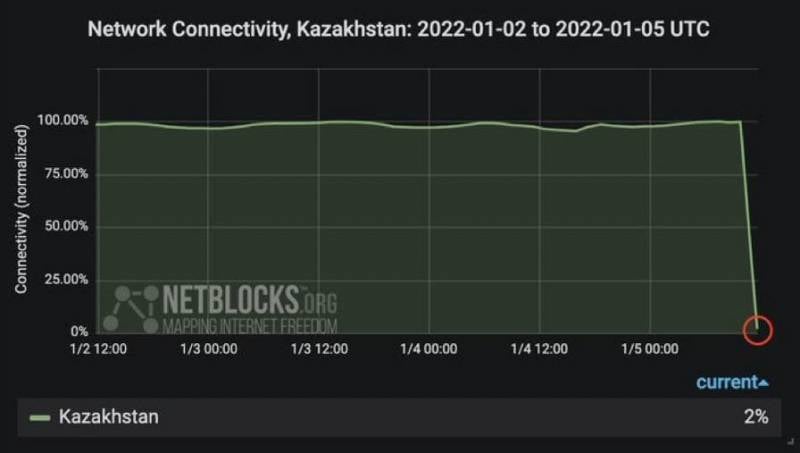 The republic was cut off from the Internet and cellular communications on January 5. On the one hand, this should seriously disrupt the coordination of the actions of the protesters, and, on the other hand, it will complicate the life of "peaceful" citizens - it is not easy to call an ambulance and it is impossible to carry out financial transactions. The country is plunging into an information vacuum for some time.
Big risks are associated with Baikonur and the Sary-Shagan landfill, which Russia leases from Kazakhstan. In general, the situation here is unpredictable - a multiple increase in rent is possible, and an elementary nationalization of infrastructure, read, plunder. Russia is now generally treated in a special way. The list of the insurgents' demands included Kazakhstan's withdrawal from all alliances with Moscow, recognizing the times of Soviet rule as a crime against post-Soviet countries, and, corona, "to condemn the military aggression of the Russian Federation against Ukraine and the annexation of Crimea."

Kazakhstan itself, in the logic of events at the beginning of January 2022, risks slipping into a civil war between key clans. This is, first of all, indicated by the open weakness of the army and law enforcement agencies. On the good, the current unrest could have been stopped by the military, taking power into their own hands and removing the incumbent president. But, apparently, not this time. The state apparatus, weakened after the transit of power, was unable to withstand even internal threats. It is not even an hour, Kazakhstan will fall apart into the very three zhuzes, of which it was collected in the USSR.

Russia once again faced the boiling republic of the former USSR. This time, it seems, everything is serious and will not work without consequences. The diversion of the Kremlin's forces and attention to the situation in Kazakhstan may motivate hotheads in Kiev. Revanchists may imagine that this is the moment of truth. And this is the most dangerous scenario for the development of events in January 2022.