USA slapped Israel with a resounding slap in the face (Haaretz, Israel) 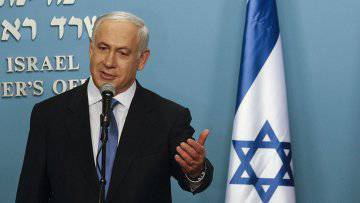 Here's an old joke. In the middle of the supermarket, the child was lying on the floor and, without ceasing, he was yelling with a good mat. No persuasion acted on the little crooch. Mother was in despair. Buyers were pretty annoyed by the incessant noise. All this lasted until the guard came up, he bent over the child and whispered something in his ear. And a miracle happened - the child immediately calmed down and stopped screaming. “What did you say to him,” the astonished attendees asked, “What magic words did you whisper to this troubled baby?” “Everything is very simple,” the guard answered, “I told him that if he didn’t shut up this minute, I would slap him with such a crack , that his head will fall off.

Hillary Clinton did not whisper anything into the Israeli noisy "child." She just slapped him a loud slap. It was expected. “We do not set exact deadlines for Iran,” the Secretary of State said in an interview with the American channel Bloomberg. “We believe that negotiations with Iran are the best way to prevent Iranians from creating a nuclear weapons».

You do not need to be a special expert in diplomacy in order to understand to whom (and in connection with which) Mrs. Clinton's words were intended. She spoke rudely and unequivocally. It was the only way to make the state with hearing problems understand what they want from it.

Clinton's words were not intended for Tehran, but for Benjamin Netanyahu. Let us translate her statement from a diplomatic language to a universal one: Israel will not present an ultimatum to the United States, Israel will not dictate to Washington what lines it should draw - “red” or “green”.

The time has come, Clinton made it clear that Israel will learn the following lesson: the United States has its own policies, its own interests and its own deadlines for the implementation of certain tasks. And all decisions on these issues (who would have thought!) Are made in Washington, not in Jerusalem.

Netanyahu should not portray surprise. After all, it was he who managed to turn the international confrontation with the Iranian regime, more recently perceived as a threat to the whole world, into an exclusively Iranian-Israeli conflict. From the point of view of Netanyahu, the colossal international efforts to mobilize support for unprecedented harsh sanctions against Tehran are worth nothing.

If this is so, Hillary Clinton makes it clear, let Israel fight with Iran alone. On health. The United States does not intend to participate with Israel (at least at this stage) in this idiotic game. The USA, Clinton concludes, has not yet exhausted diplomatic solutions to the problem.

What then does President Barack Obama mean when he says that the United States guarantees Israel’s security? If he is not even ready to install the "red", the forbidden line? Where is the guarantee that at the right time he will send planes here. And what is it all about - “right time”? When does it come?

It is time to understand: the contradictions between Israel and the United States are much deeper than the question of the timing of the attack on Iranian nuclear facilities. Clinton’s statement suggests that both states have a different understanding of what the “Iranian threat” is.

Apparently, we are talking about the fact that Washington does not believe in Tehran’s intentions to create nuclear weapons. At best, Clinton is ready to agree that uranium enrichment to 20% can serve as an indicator of such intentions, but not real efforts in this direction. "We carefully monitor the actions of the Iranians, because their words are always at odds with the case," - said Clinton.

This formula also applies to the US system of relations with Israel. This, in fact, is the American security guarantees. The United States seeks to protect the state of Israel ... from itself. Or, to be more precise, from the Israeli Prime Minister. The United States does not believe the Israeli estimates regarding the alleged number of victims of the Iran-Israel conflict.

The government of Israel claims that this amount will be relatively small. The United States believes that the Israeli attack is not able to stop the development of Tehran’s nuclear project. Worse, the Israeli attack will only strengthen the motivation of the Ayatollah regime to acquire its own atomic bomb. The US foresees a bloody war in the Middle East, in which Israel and its people will be the main target. Washington is most afraid of the fact that the United States will be forced to wage this war instead of Israel.

Netanyahu forgot that the US is not an Israeli colony. This Israel depends on the support of the United States, which has taken on the role of patron of the Jewish state, despite the tremendous price that they have to pay for it. The conflict over the Iranian problem can cause an irreparable blow to relations between the two states.

The American supermarket security guard hopes that the slap he slapped the Israeli screamer would be enough. And if not? What if Napoleon, sitting inside Netanyahu, wins over common sense?