November 4, 2021
13
In the summer of 1914, a war broke out in Europe, on a scale that surpassed everything that had been before. It unfolded on land, in the sky and at sea. Even though Britain had the strongest fleet, Kaiser's Germany dared to challenge her.


The German naval forces, also called the High Seas Fleet, were inferior to the British Grand Fleet in the number of ships. In terms of the ratio of dreadnoughts and battle cruisers, the superiority of the Royal Navy was almost 2 times. Realizing this, the British Admiralty decided to use the strategy of the naval blockade of Germany.

In turn, the German commanders did not even hope to defeat the enemy in direct combat. They proposed the following options: attack the British forces directly implementing the "blockade"; carry out mine laying, including along the British coast; actively use submarines. With the outbreak of the war, both sides began to carefully collect information about each other, slowly moving on to active actions. 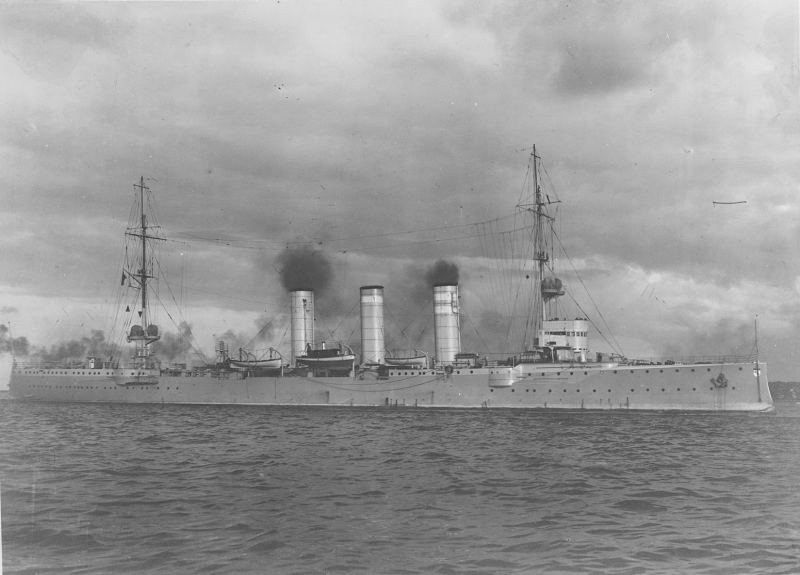 German light cruiser Mainz
The first major naval battle took place exactly one month after the declaration of war. The situation on the land front was not in favor of the Allied powers - the Entente. The British command decided to land an assault force in the Ostend area in Belgium. To hide this operation from the Germans, the Grand Fleet had to attack the German ships in the Heligoland Bay area.

The British did not want to go to the enemy shores without reconnaissance. This task was assigned to the commander of the 8th submarine flotilla - Commodore Kiizu. And his squad coped with it perfectly. The commander himself planned to attack the returning night patrols in the early morning. By August 26, the plan for the upcoming operation was announced to the commander of the Grand Fleet. However, Admiral John Jellicoe and his staff made their own adjustments. So, the raid was supposed to take place closer to 8 in the morning, and the target was the German ships going on daytime patrols. 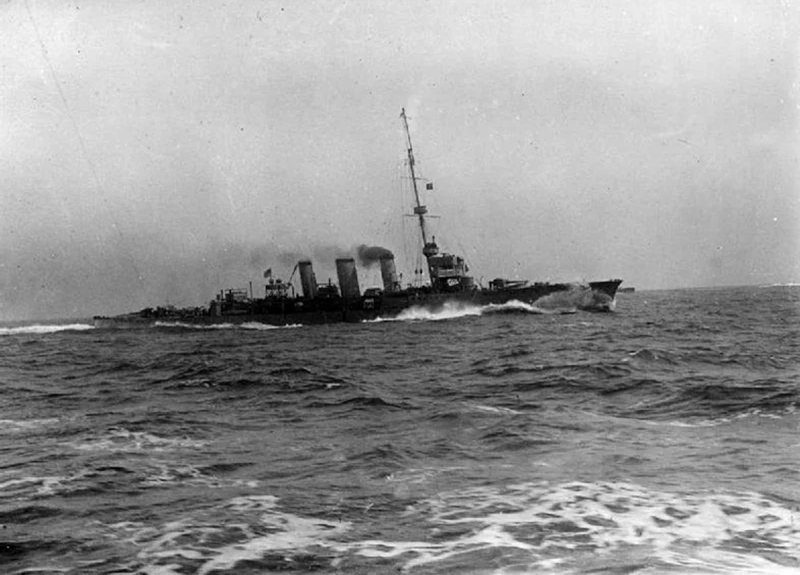 British light cruiser Arethusa
For the operation, the Admiralty allocated 2 destroyer fleets: the leaders of Arethusa, Fearless and 35 destroyers. The battlecruisers Invincible and New Zealand went with them. The day before the start of the operation, the Admiralty decided to send additional forces to the Heligoland Bay: the British were seriously afraid of going to the Hochseeflotte sea. However, sending ships of the line would be too wasteful, and Admiral Jellicoe entrusted the task to the 1st Battlecruiser Squadron under Vice Admiral David Beatty: Lion, Queen Mary, Princess Royal. Also with them came 6 light cruisers of Commodore Goodenough.

As for the German forces, the 1st Reconnaissance Group of Rear Admiral Hipper was engaged in general protection. His battle cruisers were docked at Wilhelmshaven. The light forces patrolling the harbor were directly subordinate to Rear Admiral Leberecht Maass and included the light cruisers Coln, Stralsund, Strassburg, Stettin, Frauenlob and Hela. A couple more ships, Mainz and Ariadne, were near the mouth of the Weser and Ems rivers. There were 9 destroyers at sea, and 10 more were ready to leave at the base. 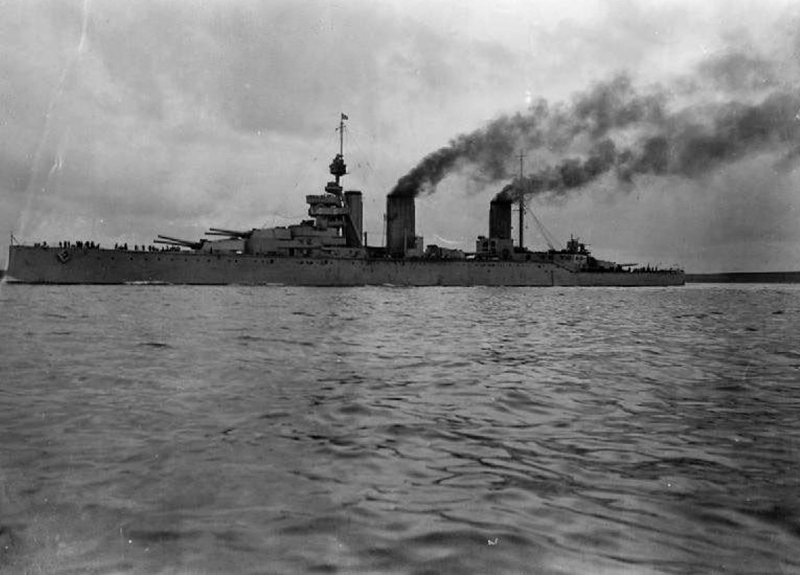 Vice Admiral David Beatty's flagship battlecruiser Lion
The morning of August 28 was hazy. The first contact between the opponents took place at about 5 am, when the British submarine E-7 attacked the German destroyer G-194, but to no avail. In turn, the German transmitted information about the attack to the headquarters. Admiral Hipper ordered one of the destroyer fleets to go to sea, as well as raise for reconnaissance Aviation.

A couple of hours later, the same G-194 discovered a detachment of enemy ships. These were destroyers led by their leader Arethusa. To aid the patrol ship, Admiral Maass dispatched light cruisers. The skirmish with the German destroyers could have ended in their death if Stettin had not arrived in time. The German ship led the British squad with the leader Fearless. Thus the second cruiser, Frauenlob, had to fight Arethusa. Although the Briton was stronger, his lack of experience greatly hindered him. In 25 minutes of the battle, almost all of the guns on the ship were disabled, which made it impossible for him to continue the battle. The German cruiser received light damage and retreated to Heligoland.

As soon as it became clear that Fearless was too close to the shore, the flotilla commander gave the order to turn around and go out of the bay. On the way, they met a lonely German destroyer V-187. The German did not fight with a large number of opponents and retreated. But he mistakenly considered the 2 large ships on the horizon to be his own. In fact, they turned out to be British light cruisers Nottingham and Lowestoft. The destroyer had no chance against them. Moreover, the British destroyers were already approaching from behind. The German ship fought fiercely, not lowering the flag to the last.

The next few hours were very strange for the British. Commodore Keyes misidentified the allied light cruisers as an enemy. When the order was given for everyone to gather in one place, even more confusion began. The submarine E-6 was nearly rammed by the cruiser Southampton, whose commander was unaware of the presence of allied submarines in the area.

At about 11 o'clock, a flotilla of British destroyers came under fire from the German cruiser Strassburg. He fired from a long distance, as he identified the British as a cruising squad. The British commander requested assistance. This call was answered by David Beatty. By virtue of his character, the admiral decided to take a risk and sent a squadron of battle cruisers to approach the enemy. The time was approaching noon, the low tide was coming to an end. This meant that the German battlecruisers would soon be able to leave Wilhelmshaven and take part in the battle. 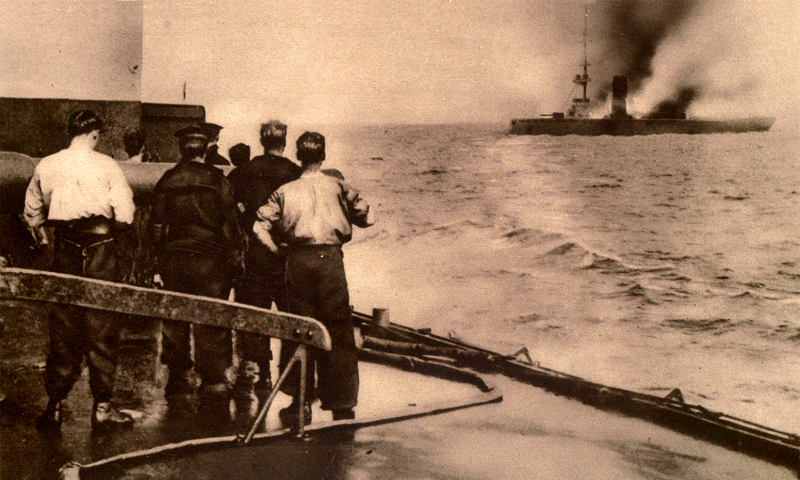 British sailors watch the burning cruiser Mainz
The position of Arethusa and Fearless became threatening, as Stettin and Mainz soon approached the battlefield, and a little later Coln. The situation was saved by Commodore Goodenough's light cruisers, who focused their fire on Mainz. The German ship was covered with a hail of shells. Soon his steering failed, and the cruiser began to circulate in place. Nevertheless, his guns continued to fire at the British destroyers. However, the fate of the ship was soon decided. The torpedo hit disabled the engine room, turning the cruiser into an easy target. Closer to 13 o'clock in the afternoon, the Mainz, engulfed in fires, sank. The British brought almost all of his crew aboard.

It was around this time that Beatty's battlecruisers entered the scene. The balance of power changed dramatically in favor of the Grand Fleet. By order of Maass, Coln began to withdraw, but it was too late. The flagship Lion, armed with 343 mm guns, left no chance of salvation for the German cruiser. The burning ship disappeared in the fog for a few seconds. This distracted Beatty, and his battlecruisers switched to another target - the obsolete light cruiser Ariadne. It took several hits and close coverings for the German ship to be incapacitated and later abandoned by the crew. 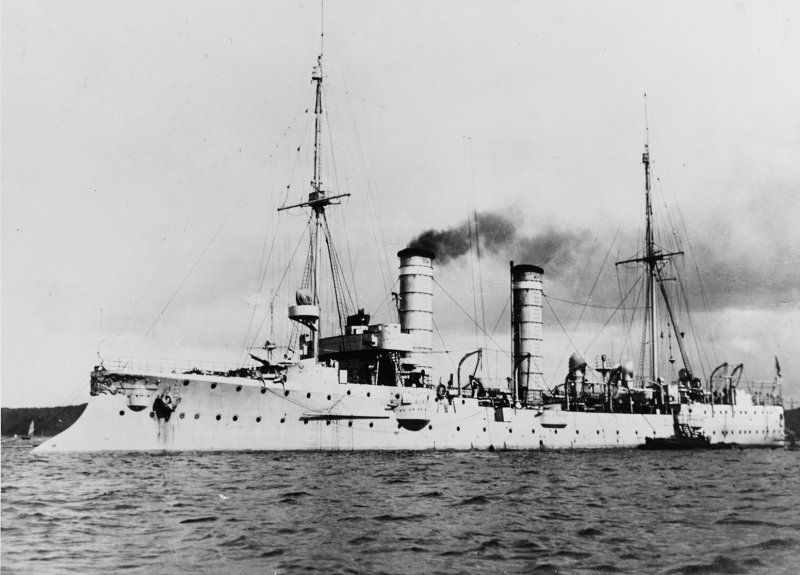 German light cruiser Ariadne sunk in battle.
Considering the task completed, and further risks unjustified, Beatty deployed his squadron and began to withdraw. Then he unexpectedly came across a previously damaged Coln. It took only a couple of volleys to finish off the "wounded" enemy. The German cruiser sank along with Admiral Leberecht Maass. From the ship's crew, only 1 sailor survived.

The battle ended in the afternoon. The Grand Fleet returned home in triumph, announcing its decisive victory. Indeed, the British fleet did not lose a single ship during the battle. The cruisers Arethusa and Fearless had damage, as well as 3 destroyers. The casualties were 32 killed and 55 wounded. Admiral David Beatty was greeted as a hero and the victory in the first major naval battle boosted British morale.

The high seas fleet in this battle lost 3 light cruisers and 1 destroyer. 2 more cruisers and 3 destroyers were damaged. On the German side, the total losses in killed, wounded and prisoners amounted to approximately 1000 people.

Considering the battle, one can note the mistakes of the German command: light cruisers were sent to intercept the enemy without reconnaissance and one by one. The High Seas Fleet Command has revised the composition of the armament of its ships, deciding to equip all cruisers with 150-mm guns, and destroyers with 105-mm guns. It was also decided to involve aviation and trawlers for reconnaissance and protection of their territorial waters.

The naval battles of the First World War largely determined the vector of development of ships and the rules of the arms race that followed in the interwar period. The largest battleships were created - the American Iowa, the Japanese Yamato and the German Tirpitz. True, these ships never met each other in battle! The question "Which of them would have won?" very interesting.