7 September 2012
25
Even before the start of World War II, new design bureaus were quickly created in the USSR in 1939, which were given the task of developing projects of promising aircraft that would be able to lead aerial battles with modern fighters of a potential enemy. One of the design bureaus was headed by A.I. Mikoyan and M.I. Gurevich, the other by S.A. Lavochkin, V.P. Gorbunov and M.I. Gudkov. The data of the design bureaus soon presented samples of the new fighters, which ultimately left a noticeable mark on the Great Patriotic War; we are talking primarily about the MiG-3 and La-5 fighters.

MiG-3 Soviet high-altitude fighter of World War II, developed on the basis of the fighter Polikarpov and 200 design team, headed by A. I. Mikoyan and M. I. Gurevich. The first prototype of the fighter was ready in the spring of the 1940 of the year, at the same time the test pilot A. Ekatov first flew on it. Tests of the new machine were completed successfully. The new fighter received the designation MiG-1 (Mikoyan and Gurevich, the first) and was recommended for mass production. This aircraft had a number of flaws, in particular, the fighter easily fell into a corkscrew and hardly got out of it, because of the rear centering, the aircraft was unsatisfactory static longitudinal stability, the pilot's fatigue with its piloting was higher than on other aircraft.

Taking this into account, a modernized version of the aircraft was created, called the MiG-3. The MiG-3 was a single-seat, single-engine, high-altitude fighter-interceptor, which was equipped with an AM-35А engine, which had an 1350 hp takeoff power. In the design of the MiG-3 aircraft, the shortcomings of its predecessor were largely overcome, but some negative family traits could not be overcome. In particular, the landing speed was quite large - not less than 144 km / h, the turn radius was large, at low altitude the fighter's maneuverability was insufficient. At the same time, at altitudes above 6 000 meters, the MiG-3 was more maneuverable than other fighters. 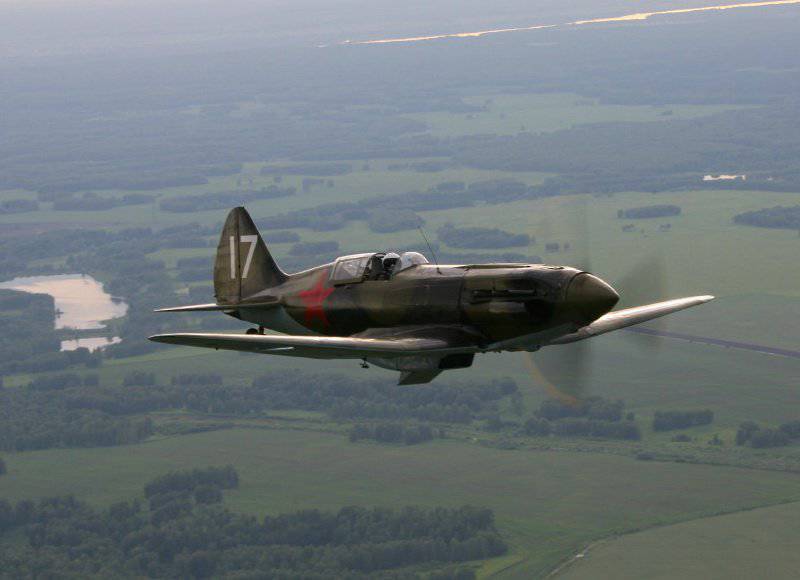 The turn of the fighter was 26-27 seconds. Despite the significant take-off weight (3 350 kg.), The speed of the serial MiG-3 fighter near the ground slightly exceeded 500 km / h, and at an altitude of 7 000 meters it accelerated to 640 km / h. At the time, it was the highest speed in the world achieved on a serial fighter. The plane was quite promising, but with the beginning of the Great Patriotic War it became clear that the main battles would be fought at low and medium altitudes, at which the MiG-3 was inferior in maneuverability to other aircraft. Coupled with fairly weak weapons, this was the reason why the plane was discontinued in 1942 year.

The nature of the fighting determined the nature of air battles. On the Eastern Front throughout the war, air battles were fought at altitudes less than 4 000 meters. In this case, the high altitude MiG-3, which was initially recognized by its merit, turned into a disadvantage, since a number of characteristics of the high-altitude engine were achieved due to the deterioration of its qualities at low altitudes. In addition, the quality of the first serials at the beginning of the war left much to be desired. Also, the aircraft demanded that highly qualified pilots (by the standards of wartime). Its short fuselage (like the I-16 or the subsequent I-180) had insufficient longitudinal stability.

Along with this, the repair qualities of the MiG-3 fighter were simply excellent. The interchangeability of components and assemblies was well provided. From a 2-3 malfunctioning aircraft, it was easy to assemble one fully functional machine. In addition, at the time of its entry into service, the MiG-3 was one of the best fighter-interceptors in the world. 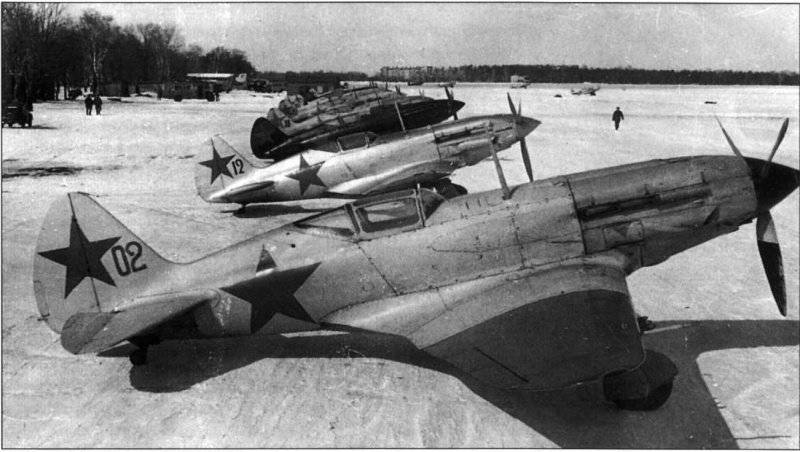 In this case, the fighter’s armament turned out to be frankly weak. Although, despite their shortcomings, in the hands of tactically competent and enterprising pilots, the MiG-3 could show itself to be a fairly strong fighter. There were plenty of examples of this. In particular, the well-known Soviet ace A. I. Pokryshkin shot down enemy vehicles, including 3 Messerschmitt Bf-10E fighters, on MiG-5 109. At the same time, under the conditions of mass exploitation and at low altitudes, this aircraft had insufficient combat capability, yielding to the German fighter Bf-109F.

Armament MiG-3 consisted of 12,7-mm machine gun UBS (300 ammunition) and 2-x 7,62-m ShKAS machine guns (375 for ammunition). On some fighter series, two more 12,7-mm UBK or 2 UBS machine guns were additionally installed under the engine. But his weapons were clearly insufficient. On some machines with an AM-38 engine, 2 synchronous 20-mm ShVAK guns (100 projectiles) were installed, but this version was produced in a very small series.

The difficulties of wartime with the provision of IL-2 attack aircraft were forced to abandon the release of AM-35 in favor of AM-38, which was necessary for the attack aircraft. This event finally predetermined the fate of the MiG-3 fighter. At the beginning of 1942, its release was discontinued. In total, 1940 1942 fighter of this type was released in the 3172. 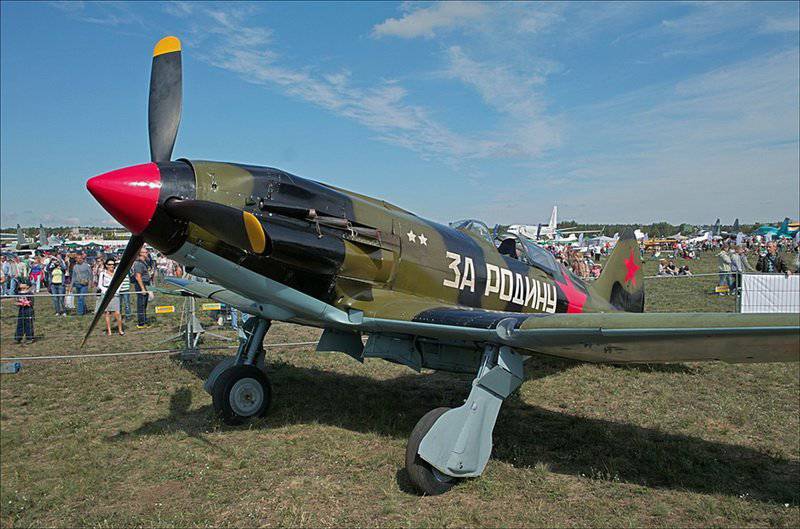 And although the MiG-3 was mass-produced for a relatively short time, it managed to leave a noticeable mark on stories Great Patriotic War. The fighter played a particularly large role during the battle of Moscow in 1941, when he participated in repelling German raids aviation to the capital. After the production was completed, the MiG-3 was used for quite some time in the Air Force, in particular, in air defense regiments. A high degree of maintainability and unification of the fighter provided them with a sufficiently long service life. The last high-altitude fighter MiG-3 were decommissioned from combat units for wear only at the very end of the war.

Performance characteristics of the MiG-3:

The single-engine fighter Lavochkin La-5 was created by the OKB-21 in Gorky under the direction of S. A. Lavochkin in the 1942 year. The fighter was a single-seater monoplane, equipped with a closed cabin and a wooden frame with fabric covering and wooden wing spars. The aircraft was originally called LaGG-5. The aircraft was based on the previous design work - fighter LaGG-3, which in various serial versions produced before 1944 year. At the same time, in the 1941 year, Lavochkin and Gudkov (in the future, their paths diverged) were working to equip their fighter with a more powerful air-cooled engine M-82. Compared with the VK-105 engine, which was used on the LaGG-3, the new aircraft engine had a large take-off power - 1 700 hp. vs xnumx xnumx hp 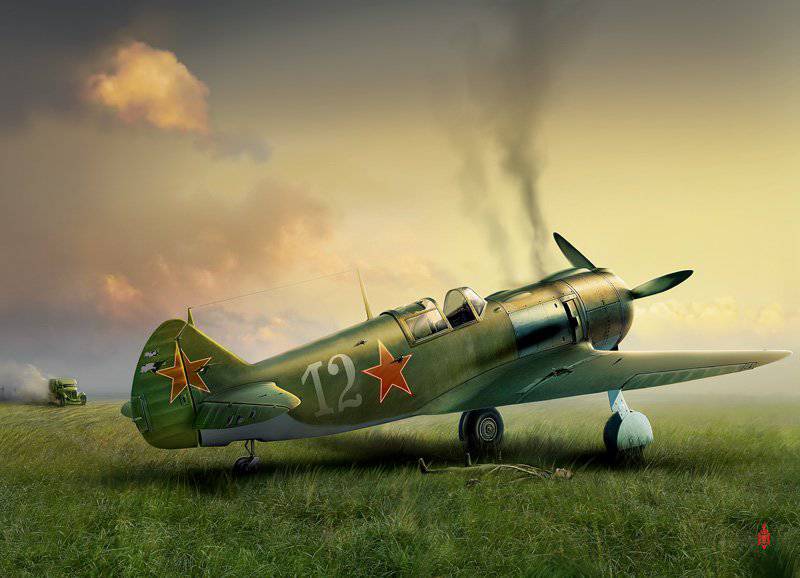 Very high expectations of the designers were associated with this engine, but its serial production was delayed. When test pilot G. Mishchenko raised a new fighter designed by Lavochkin into the sky of 1942 in March, it became clear that these hopes were met. Successfully passed and state tests of the machine, after which in April 1942, the fighter, which received the designation La 5, was launched into a series. And although the aircraft had children's diseases and a number of flaws, technologists managed to fine-tune its production in a very short time, since when it was created, the LaGG-3 glider was taken as the basis. However, due to the absence of scarce delta wood, in organizing mass production in the design of the new fighter, more and more ordinary pine was used.

Thanks to the new 1700-strong engine (normal power - 1330 hp), the fighter's flight characteristics were quite high. Its maximum speed reached for 580-600 km / h, maneuverability improved. In addition, the fighter’s weapons were reinforced. He received two 20-mm automatic synchronized ShVAK cannons that fired through the propeller.

All these improvements could not affect the combat characteristics of the machine and its behavior in combat. With the appearance of La 5 fighters at the front, Soviet pilots were able to fight on equal terms with modern German fighters. At the same time, the appearance of the Lavochkins in the sky was an unpleasant surprise for the Germans. Perhaps, for the first time during the war years, the German aces faced a fighter who could successfully conduct not only defensive combat, but also an offensive one. In all, during the war years, almost 10 000 La 5 aircraft were produced. 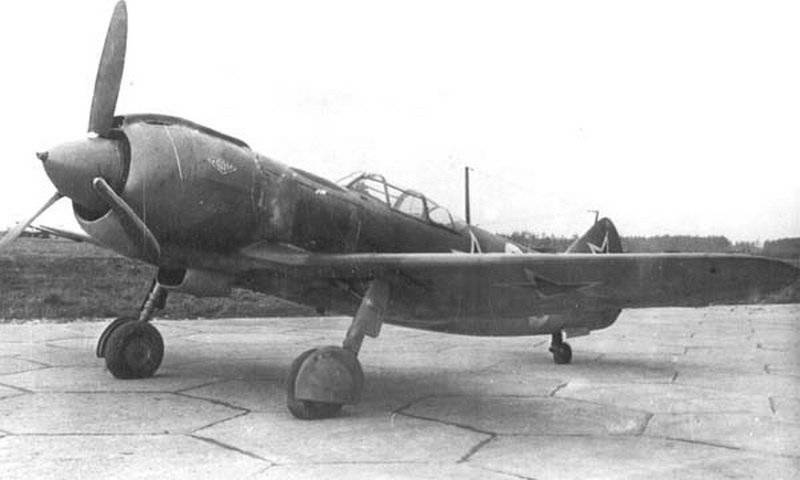 But the war is the engine of progress, and already at the end of 1942, advanced Bf 109 fighters in the G version and new Focke-Wulf 190 fighters appeared at the front in large numbers, whose combat capabilities significantly exceeded the previous mass Bf 109E and F fighters. In front of the situation, the Lavochkin Design Bureau demanded immediate and adequate measures to improve the quality of the La-5 fighter. As a result, in the 1943 years a new version of the La-5F fighter with the M-82F engine was developed. In addition, it was possible to reduce the weight of the aircraft design from 3 360 to 3 200 kg. In addition, the design of the lantern of the pilot's cabin was changed, which had a positive effect on the back-up review. The fighter’s maneuverability, as well as its maximum speed, increased practically on 20 km / h.

In the same year 1943, a new engine M-5FN was installed on the upgraded La-82. Unlike its two carburetor predecessors, this engine was equipped with a new system of direct fuel injection into the cylinders. This task was performed in it by high-pressure pumps. La-5 fighters, which received a new M-82FN engine (FN - forced with direct fuel injection), became known as La-5FN. When creating a new aviation engine, the specialists of the KB A. Shvetsov managed to bring the maximum power up to the 1 850 hp without increasing its mass.

The tests of the La-5FN fighter surpassed all expectations. Its maximum speed increased to 635 km / h. The La-5FN fighter is rightfully ranked among the best planes in the world of that period. He surpassed the German FW 190A fighter in terms of horizontal and vertical maneuver, as well as speed at low and medium altitudes. For the first time, La-5FN was massively used during the battles at the Kursk Bulge, where they met FW 190A in the sky and in battles proved their superiority over Focke-Wulfs. Especially their advantage was palpable in close maneuver combat. This is confirmed by the dry numbers - the turning time for the La-5FN was 19 s., And for the FW 190A - the 22 s. The height in 5 000 meters “Lavochkin” gained 5 minutes, and the German 5,8 minutes. respectively. 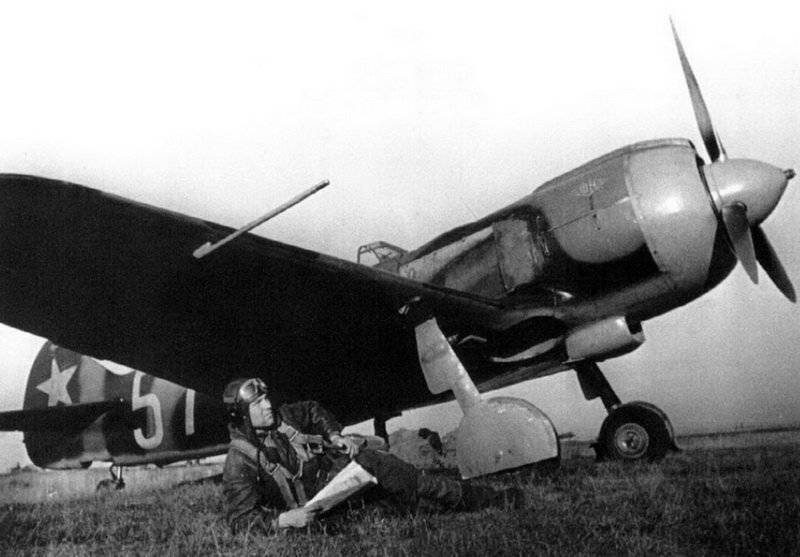 Tactical and technical characteristics of the La-5:

This popular science film tells about the main Soviet fighters of the Second World War. These machines have replaced the outdated pre-war fighters I-16 and I-153. Even before the war, their prototypes were superior to German engineering, but real superiority began to be felt only in the second half of the Great Patriotic War. They easily surpassed all enemy counterparts, and also did not yield to Allied vehicles.

Ctrl Enter
Noticed oshЫbku Highlight text and press. Ctrl + Enter
We are
Aviation of the Red Army of the Great Patriotic War (part of 6) - Yakovlev fightersMiG-15 - the best fighter of the Korean War
25 comments
Information
Dear reader, to leave comments on the publication, you must to register.