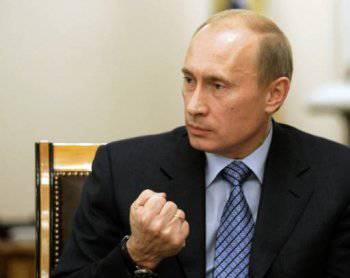 The funds for the state defense order (23 trillion rubles to 2020) are huge, but not endless, the Kremlin admitted. Vladimir Putin ordered to introduce personal responsibility for the effectiveness of spending - as for customers weaponsand for performers. So that the first ones do not put out "bad non-executable orders", and the second ones do not break deadlines and do not inflate bills.

The last three years, the state defense order is constantly on the verge of collapse, did not deny the president at a meeting of the Security Council in Novo-Ogarevo. The customer (the state represented by the Ministry of Defense) made sometimes incomprehensible requirements, financed work with interruptions, and the calculation from the performers was generally beyond the understanding of the Kremlin. At the price and terms of performers and customers often could agree only after the direct intervention of Putin himself. “Manual contracts were concluded,” the president looked at Prime Minister Dmitry Medvedev. “This is not a systematic work!”

But most importantly, our defense industry remained in the last century. “For three decades we have missed several development cycles, we need to catch up!” - said Putin. Deputy Prime Minister Dmitry Rogozin was even more frank in his conversation with journalists: “Now the defense industry is raking up the remnants of the Soviet scientific and technical reserve.”

The Kremlin clearly fears that 23 trillion rubles. (“The unprecedented figure born in agony” called it Vladimir Putin) will dissolve into paper reports without a perceptible exhaust. The president is waiting for this money not just upgrading the defense industry, but "a breakthrough, as in 1930."

Dmitry Medvedev was entrusted with thinking over a single pricing policy in the defense industry. The personal responsibility for the effectiveness of the state defense order for the leaders of the defense industry complex will be determined by a special interagency commission created on Friday. “Efficiency will be judged not by the amount of funds spent, but by the quality of the products,” the Supreme Commander warned. - We need things - airplanes, ships, Tanks, and not the numbers of disbursed funds. It is important what technologies the country will receive. ” According to Rogozin, "Russia can no longer afford to let satellites fall, and no one was responsible for this." “For a year and a half, seven space accidents, but not a single enterprise was punished by the ruble,” the Deputy Prime Minister complained to reporters. Responsibility will be provided both for customers, “so as not to put up bad unfulfilled orders”, and for performers, to make weapons on time and at the originally agreed prices.

In the hope of efficiency, the government is ready to turn the green light on to private capital. The procedure for creating private enterprises in the defense industry will be simplified. And in order for the investor to understand the market, they will create a single databank with information about the needs of the industry. It is possible to attract foreign partners, but Russia does not need screwdriver production, the president noted. A plan to attract private investment and motivate capital will write a PPP council, which will be created at the military-industrial commission. “In the US, up to 60% of the defense industry is private capital,” Mr. Rogozin shared with journalists.

New military equipment should be at understandable prices and at the level of world standards, “and perhaps somewhat higher,” Secretary of the Security Council Nikolai Patrushev shared his plans. “So far, despite numerous meetings, we are not succeeding,” he added. In some cases, weapons samples will be purchased abroad in order to “use the accumulated experience to create their own,” but on the whole, rely on domestic designers.

At the end of the Security Council, Putin clearly showed that he was ready for a personnel revolution in the defense industry. Having invited Dmitry Rogozin and the head of Roskosmos, Vladimir Popovkin, to the office of the Deputy Prime Minister Dmitry Medvedev, the president said: if any resignations are ripe, you can give names.