Memoirs of the hanged man

5 September 2012
16
Wilhelm Keitel was born on September 22 of 1882 in the family of hereditary landowners Carl Wilhelm Augustus Louis Keitel and Apollonia Keitel-Wisinging. The childhood of the future field marshal was spent in the 650-acre family estate Helmsherode, located in the western part of the Duchy of Brunswick. The family lived very modestly, hardly paying for the estate bought in 1871 by Wilhelm’s grandfather Karl Keitel. Wilhelm was the first child in the family. When he was six years old, he had a brother, Bodevin Keitel, also a well-known commander. During childbirth mother - Apollonia Keitel - died from an infectious infection. Up to nine years old, William studied under the supervision of home teachers, dreaming of becoming a farmer, like all his ancestors. But in 1892, his father sends him to the Royal Göttingen Gymnasium. Here he first thinks about the career of the military. Since the horse was very expensive to maintain, Wilhelm chooses field artillery. After graduating from Gottingen with average marks, in the early spring of the 1901 of the year, he was recruited into the 46th Lower Saxon artillery regiment as a volunteer. At the same time, his father marries one of William's former home teachers, Anne Gregoire. 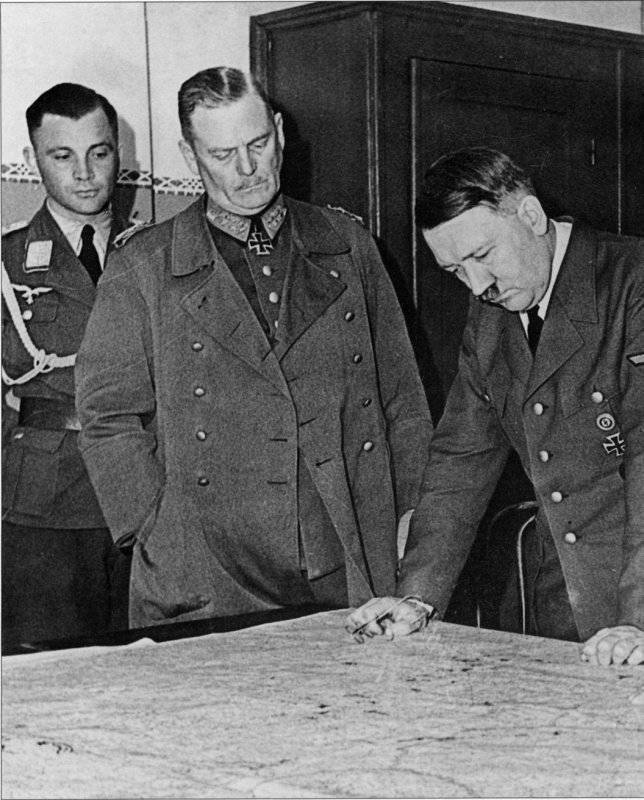 Hitler (right) with Field Marshal Keitel (center) and Wilhelm von Leeb (to the right of Hitler behind the scenes, visible on other variants of this snapshot) is studying the map in the process of preparing the plan for an attack on the USSR - Barbarossa. Left in the background Hitler's adjutant Nicholas von Belov

Initially, Wilhelm Keitel served as a candidate for officers in the first battery of an artillery regiment. But in August 1902, he graduated from the military school, was promoted to lieutenant and transferred to the second battery. The third battery at this time led Gunther von Kluge, who immediately became the sworn enemy of the young Keitel. Kluge considered Keitel to be “absolute zero,” and in response, he called him “an arrogant upstart.” In 1905, Wilhelm graduated from the courses of the Uterbog Artillery and Rifle School, after which in 1908, the regimental commander von Stolzenberg identified him as a regimental adjutant. In the spring of 1909, Keitel married the daughter of Armand Fontaine, a wealthy landowner and industrialist, Lise Fontaine. In the future they had three daughters and three sons. All sons became military men. It should be noted that in the family Lisa always played a major role. In spite of Keitel’s desire to return to her home estate in Helmshorod and settle down there, she longed for her husband to continue moving up the career ladder. In 1910, Keitel becomes the first lieutenant.

When World War I began, Keitel and his family were on vacation in Switzerland. He came to the Western Front in the 46 artillery regiment and participated in battles until, in September in Flanders, a fragment of a grenade interrupted his right forearm. For his bravery, he was awarded the Iron Crosses of the first and second degrees. From the hospital he returned to the regiment already captain. In the spring of 1915, Keitel is assigned to the General Staff and transferred to the reserve corps. Begins the meteoric rise of Keitel's career. In 1916, he was already the chief of operations of the headquarters of the nineteenth reserve division. At the end of 1917, Wilhelm finds himself at the Berlin General Staff, as the head of the operations department of the headquarters of the Marine Corps in Flanders.

After the end of the war, under the terms of the Versailles Peace Treaty, the General Staff of the German Army was dissolved. Keitel in the rank of captain falls into the army of the Weimar Republic, where he works as a tactical instructor in a cavalry school. In 1923, he was promoted to Major, and in 1925 he was transferred to the Ministry of Defense. In the year of 1927, he enters the sixth artillery regiment as commander of the eleventh battalion and becomes an Oberst-lieutenant (lieutenant colonel) in 1929. In 1929, Keitel returns to the Ministry of Defense, but already the head of the organizational department. 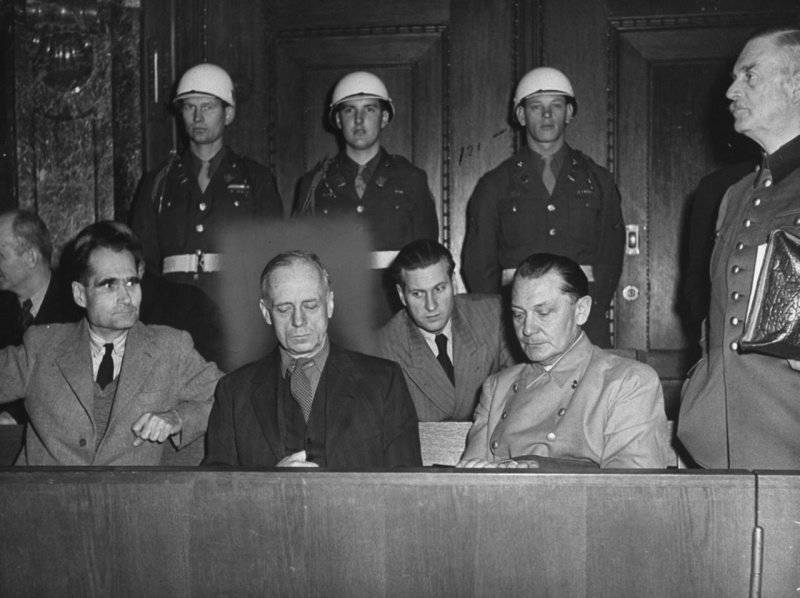 In the summer of 1931, Keitel travels around the USSR as part of a German military delegation. The country impresses with its size and capabilities. When Hitler became Reich Chancellor of Germany in 1933, Keitel was appointed infantry commander. In 1934, Wilhelm's father dies, and he seriously decides to leave the army. However, his wife managed to insist on continued service, and Keitel gave it to her. At the end of 1934, he assumed command of the 22 th Bremen Infantry Division. Keitel did a great job, forming a new combat-ready division, despite the fact that it had a negative effect on his health. By 1935, he became a complete neurasthenic, smoked a lot. He was treated for thrombophlebitis of the right leg for a long time. Subsequently, almost all the compounds in the creation of which he participated were destroyed at Stalingrad. In 1935, Keitel was asked to lead the management of the armed forces. Independently, he could not decide on this, but again his wife entered into the business, forcing William to agree. 1938 year was especially lucky for him. In January, the eldest son, a lieutenant of cavalry, made an offer to one of the daughters of the German War Minister Werner von Blomberg. And in February, Keitel stood at the head of the Wehrmacht Supreme Command established (OKW). Why did Hitler trust him with this position? Most likely, for the fact that Wilhelm was already able to unconditionally fulfill any of his orders.

General Walter Warlimont will later write: “Keitel was sincerely convinced that his appointment instructed him to identify himself with the wishes and instructions of the Supreme Commander even in those cases when he personally did not agree with them, and honestly bring them to the attention of all subordinates.” 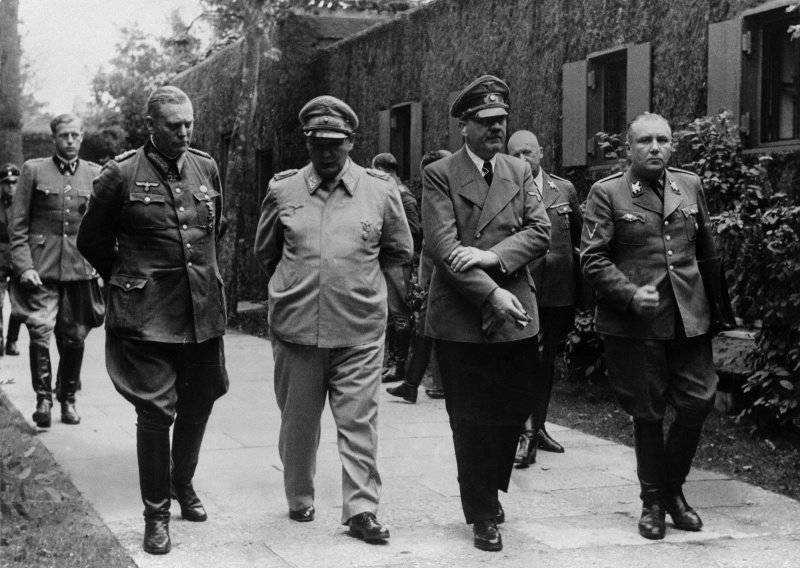 Field Marshal Wilhelm Keitel, Chief of Staff of the Supreme High Command of the Armed Forces of Germany, Reich Minister of the Imperial Ministry aviation Hermann Goering, Adolf Hitler and head of the Party Chancellery of the NSDAP, Hitler's closest associate Martin Bormann. The photo was taken after the most famous assassination attempt on Hitler - he rubs his arm damaged by the explosion

By decision of Wilhelm, OKV was divided into three parts: the operational department of Alfred Jodl, the department of intelligence and counterintelligence or the Abwehr of Wilhelm Canaris and the economic department of George Thomas. All three departments had rivals in the person of other departments and services of the Third Reich, such as the General Staff of the Army, the Department of Foreign Affairs, and the security service. The OKW never worked the way Keitel wanted. The departments did not interact with each other, the number of problems and tasks only grew. The only successful military operation coordinated by the OKW was Vezeryubung - the occupation of Norway and Denmark, which took 43 of the day. After the victory of Germany in the summer of 1940 over France, having become generous, the Fuhrer made him field marshal. Throughout August, Keitel was preparing a plan to invade England under the name “Sea Lion”, which was never implemented, since Hitler decided to attack the Soviet Union. Frightened Keitel drew up a document in which he expressed all his objections to this issue and a proposal for resignation. It is not known what the enraged Fuhrer said to him, but after that Keitel fully trusted Hitler, becoming his submissive puppet. When at the beginning of 1941, Hitler decided to completely destroy the Russian people, Keitel issued well-known orders for the unconditional extermination of Soviet political workers and the transfer of all power in the occupied East to Himmler’s hands, which was a prologue to genocide. Subsequently, Hitler issued a number of orders designed to break the will of our people. For example, for each German soldier killed in the occupied rear, it was necessary to destroy the Soviet people from 50 to 100. Under each of these documents was Keitel's signature. Totally loyal to the Führer, Wilhelm was the very man whom Hitler endured in his environment. Keitel completely lost the respect of his colleagues, the military, many of the officers called him "lakatel." When 20 July 1944, a bomb planted by Colonel Stauffenberg, exploded in Wolfsschanz - Wolf's Lair, the head of the OKW was contused and stunned. But after a moment, with shouts: “My Führer! Are you alive? ”, Already raised Hitler, the victim is much smaller than the rest. After, conducting an operation to suppress the coup, Keitel showed no compassion for the officers involved, many of whom were his friends. In the last days of the war, in the battle for Berlin, Keitel completely lost a sense of reality. He blamed all military leaders and refused to accept the fact that Germany had lost the war. However, 8 May 1945, William had to sign the German surrender. He did this in full dress, with a marshal's baton in his hand. 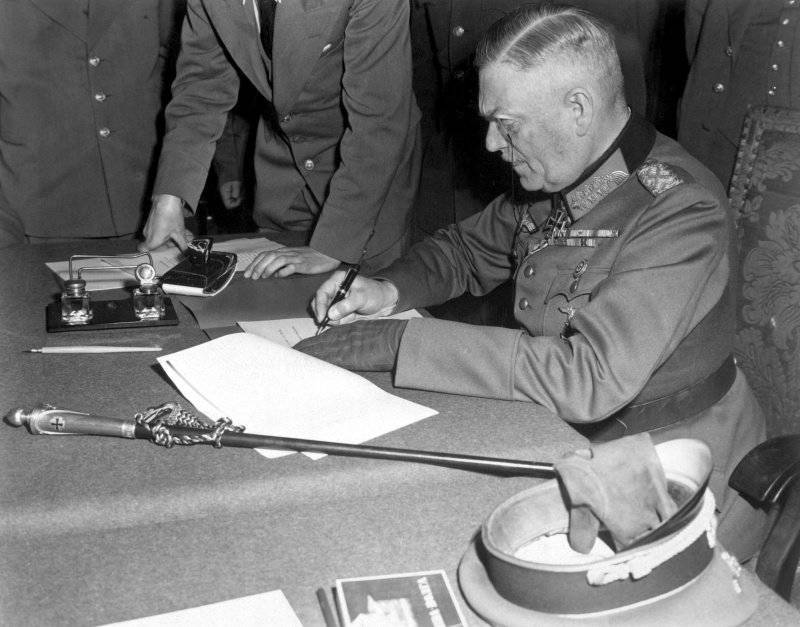 After that, he went to Flensburg-Murwick, where four days later he was arrested by the British military police. The International Military Tribunal in Nuremberg accused him of plotting against peace, committing war crimes and crimes against humanity. Keitel answered all questions directly and agreed only that he fulfilled the will of Hitler. However, the tribunal found him guilty on all counts. He was denied execution. 16 October 1946, immediately after the execution of Ribbentrop, Wilhelm Keitel was hanged.

Independently climbing the scaffold, Keitel said: “I ask the Almighty Lord to be merciful to the people of Germany. More than two million German soldiers died for a homeland before me. I am following my sons - in the name of Germany. ”

Obviously, the field marshal naively believed that for the last eight years, conscientiously obeying the Führer, he was fulfilling the will of the entire German people. He finally destroyed the entire Prussian officer corps, definitely not wanting it.

Already with a noose around his neck, Wilhelm shouted: "Deutschland uber alles!" - "Germany is above all." 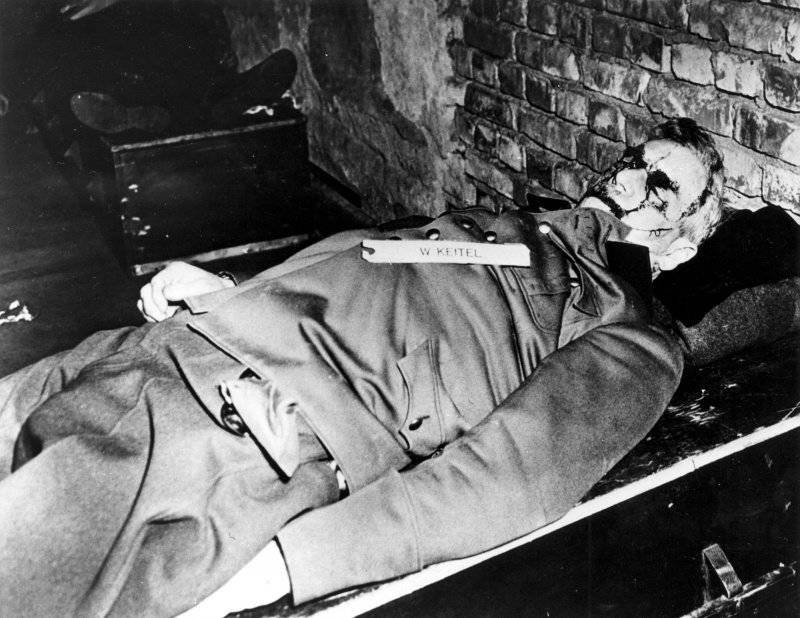