September 2 911. The first international treaty between Russia and Byzantium was concluded. 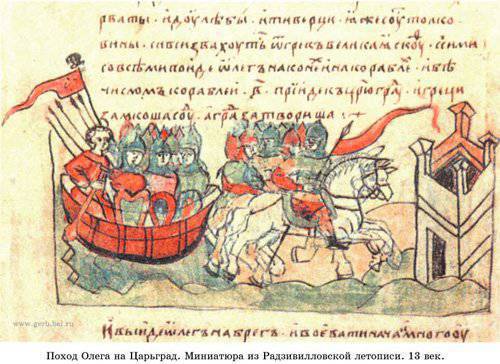 2 September 911, Grand Duke Oleg, after the successful Russian-Byzantine war 907, concluded an agreement with Byzantium, which regulated criminal and civil relations between the Russians and the Romans (Greeks).

After the military strike of Russia on the Byzantine Empire in 907 and the conclusion of a general political intergovernmental agreement between the Rus and the Greeks, a four-year pause occurred. Then in the chronicle it is reported that Prince Oleg sent his husbands "to build peace and put a number" between the two states and set out the text of the agreement itself. The 911 contract of the year reached us completely with the entire basic contractual structure: with the initial formula, final oath and date. After the text of the agreement, the chronicler reports that the Roman Emperor Leo VI honored the Russian embassy, ​​gave him rich gifts, organized a tour of the temples and chambers, and then released him to the Russian land with "great honor." Arriving in Kiev, the ambassadors told the Grand Duke the “speeches” of the emperors (at that moment the emperor Leo VI ruled, and his co-rulers were the son Konstantin and brother Alexander) and spoke about the creation of the world and the adoption of a number of treaties.

According to a number of researchers of the treaty (including A. N. Sakharov), this is an ordinary interstate treaty. There are two sides to it: "Rus" and "Greeks", or "Rus" and "Chrestians". In addition, it is a typical agreement of "peace and love": its general political part repeats the 860 and 907 treaties. The first article of the agreement is devoted to the problem of peace, both parties swear to preserve and observe “love is irreversible and unshakeful” (peaceful relations). In fact, the contract confirms the former "verbal" (or mostly verbal) similar agreements.

The 907 Treaty was not only an agreement of "peace and love", but also a "series" that solved specific problems of the relations between the two powers and their subjects in the political and economic spheres. The articles of the treaty speak of ways to deal with various atrocities and penalties for them; about responsibility for murder, and property responsibility for it; on liability for willful beating, theft and robbery. The order of assistance to “guests”, the members of both powers during their voyage, assistance to those who suffered a shipwreck, the order of redemption of captives — the Rus and the Greeks — is regulated. The eighth article talks about the Allied help of Byzantium from Russia and the order of service of the Rus in the army of the emperor. The following articles are devoted to the order of redemption of any other prisoners (not Rus and Greeks); the return of escaped or abducted corpses; the practice of inheriting property of the deceased in Byzantium Rus; on the order of the Russian trade in the Byzantine Empire; on liability for debt and non-payment of debt.

In total, 13 contains articles that cover a wide range of problems governing the relationship between Russia and Byzantium, and their subjects. The contract is bilateral and equal. This is expressed in the fact that in the contract both parties swear to observe “peace and love” forever. It is noted that if any crime is committed and there is no evidence, then the oath should be resorted to and the suspect should swear according to his faith (Christian or pagan). For the murder of the Greek by the Rus, or the Rus by the Greek, the criminal is punishable by death (second article). Equality of relations can be seen in the remaining articles of the treaty: equal punishments for the Rus and the Greeks for the blow weapons or any other subject - the third article, for theft - the fourth article, for the attempted robbery - the fifth article. This line is continued in other articles of the agreement. In the sixth article, we see that if the boat of the Rus or the Greeks is shipwrecked, then both parties are equally responsible for saving the ship of another state. Russia is obliged to send the Greek vessel "to the land of Christianity", and the Greeks should send the Russian boat to the "Russian land". Equal rights and bilateral obligations are clearly visible in Article Thirteen, which states that if the Rus makes a debt in the Russian land and then does not return to his homeland, the lender has every right to complain about it to the Greek authorities. The guilty will be seized and returned to Russia. The Russian side gave an obligation to do the same with respect to the escaped Greek debtors.

A number of articles contain only the obligations of the Greek side. In particular, the Byzantine commitments can be traced where there is a speech about the indispensable return of a Russian soldier who escaped or stolen. In addition, the Byzantines pledged to return to Russia the property of Russian subjects who died in the empire, if the deceased did not make any orders to that effect. The obligations of the Greek side also apply to the article about allowing the Rus to serve in the Byzantine army. In addition, the same article points to the military alliance of Russia and Byzantium: it is reported that in the event of a war of the Greeks with any adversary, the Ruses can provide military assistance to the empire. There is an opinion that such an agreement was concluded orally both in 860 and in 907. The Greek side paid military support from the Russian state with gold in the form of tribute and political and economic benefits. Byzantium was interested in military assistance to Russia against the Arabs. These allied relations were disrupted around 930's.