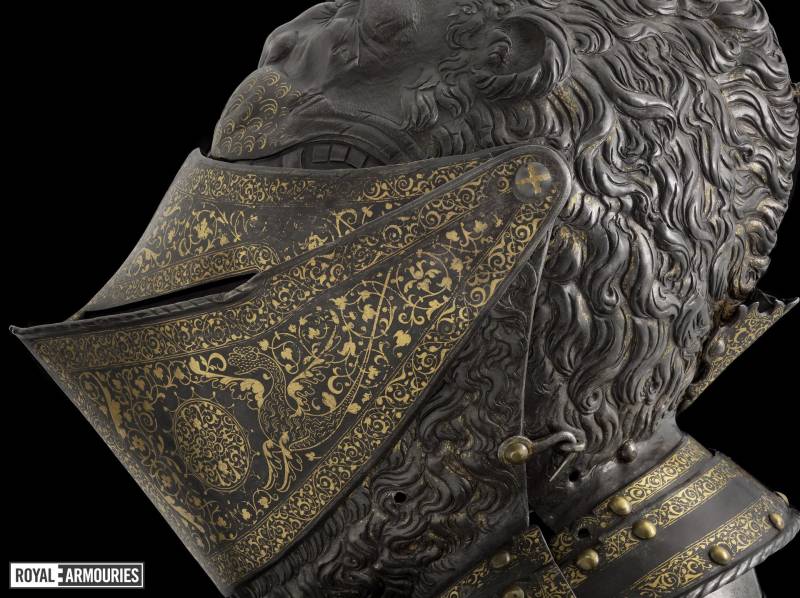 Visor of the helmet of King Henry II of France

“Saul dressed David in his own armor.
He put chain mail on him
and put a bronze helmet on his head. "
(First Samuel 17: 38)
Museum collections of knightly armor and weapons. And it so happened that when there was so much armor and weapons in the Tower Museum that only a small part of them could be shown, the British prudently decided to place them in the new museum. But not in London, where there are already enough museums, but in one of the cities on the periphery.

Leeds became this city. And he certainly benefited from this, because, although museums in England are free, there are incomparably more people coming to Leeds. And among its exhibits there is a completely unique knightly armor, about which we: A - first we will tell, and then: B - we will show the techniques of making knightly armor, which many VO readers have long expressed a desire to look at. 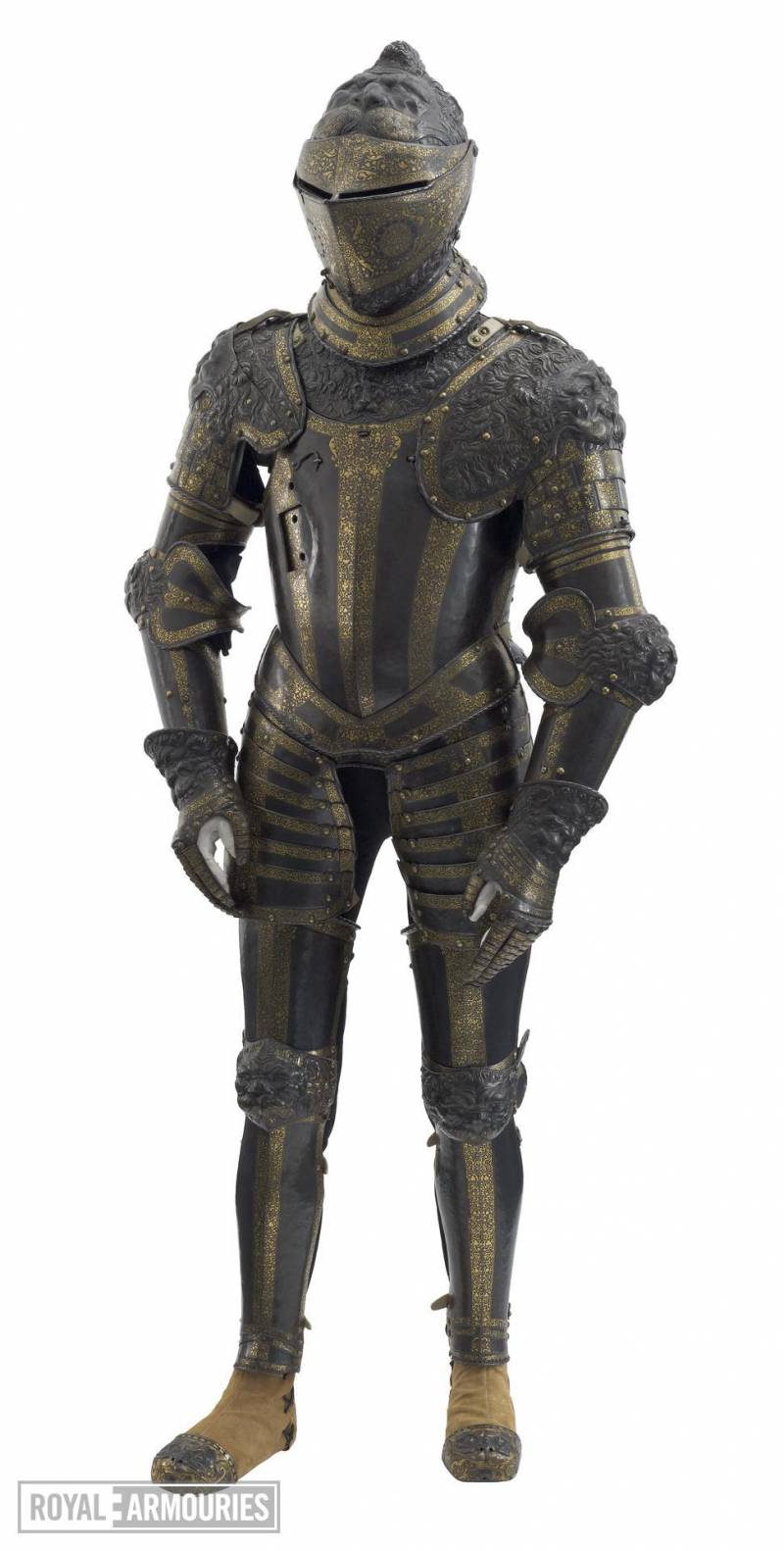 So, we have before us the famous "Lion Armor" (1550), which may have been made for King Henry II of France, and today exhibited in the "Gallery of Tournaments" at the Royal Arsenal in Leeds 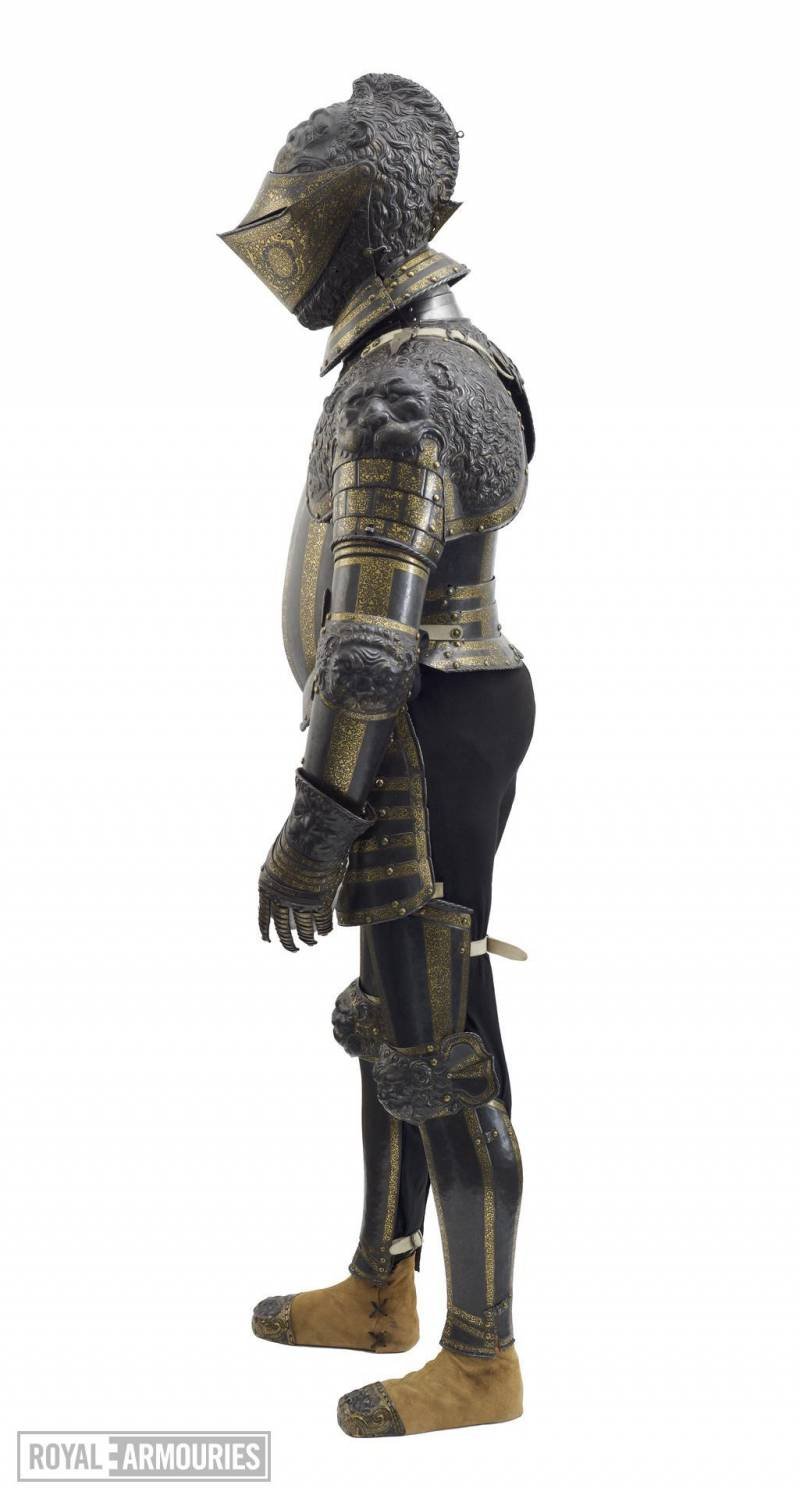 And they are - side view
It is believed that this embossed "Lion Armor" belonged to King Henry II of France (reigned 1547-1559). 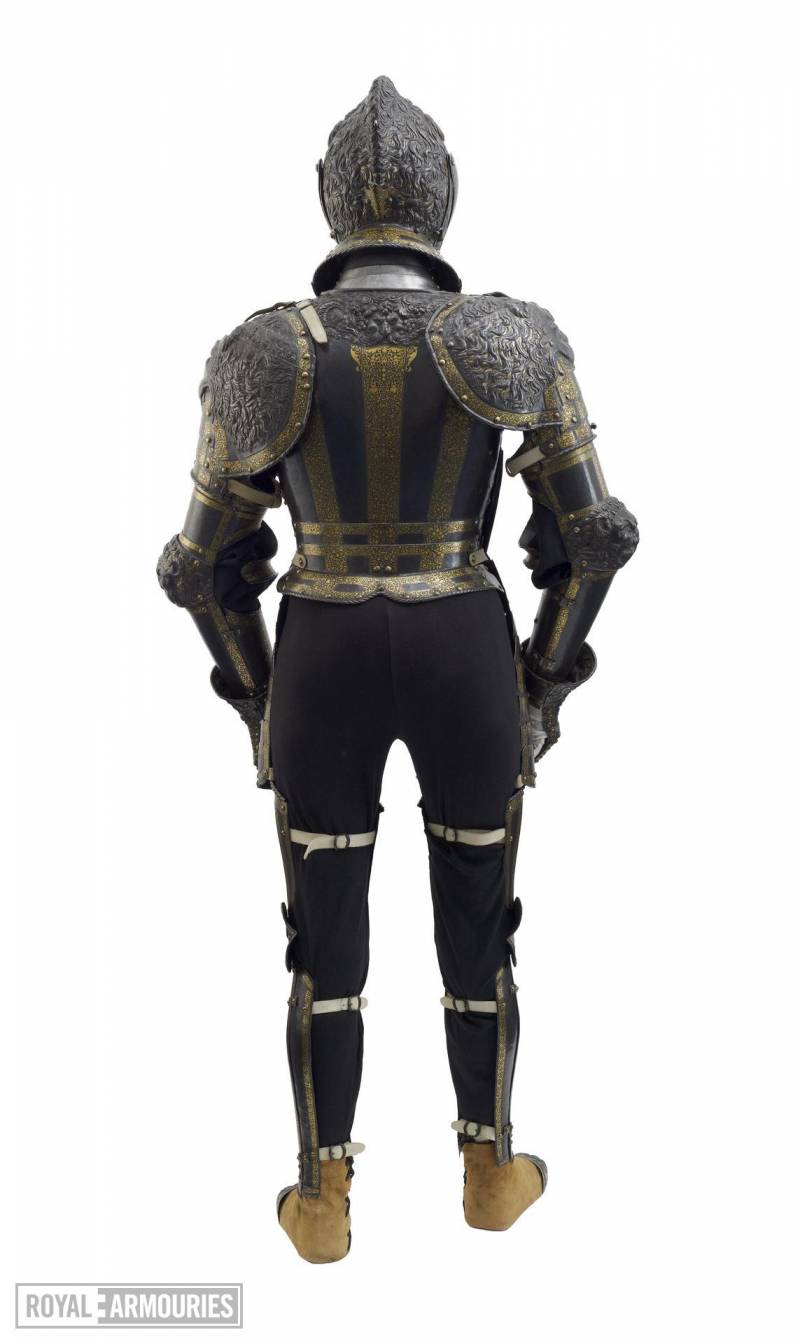 The same armor. Back view
And it was made in Italy in the famous Milanese Negroli family, which by the middle of the XNUMXth century was the most popular manufacturer of this type of armor. The armor got its name from the formidable lion faces that are found on its most visible surfaces. Perhaps most impressive is his helmet, which frames the face with the open mouth of a lion in the manner of antique Roman ceremonial armor. 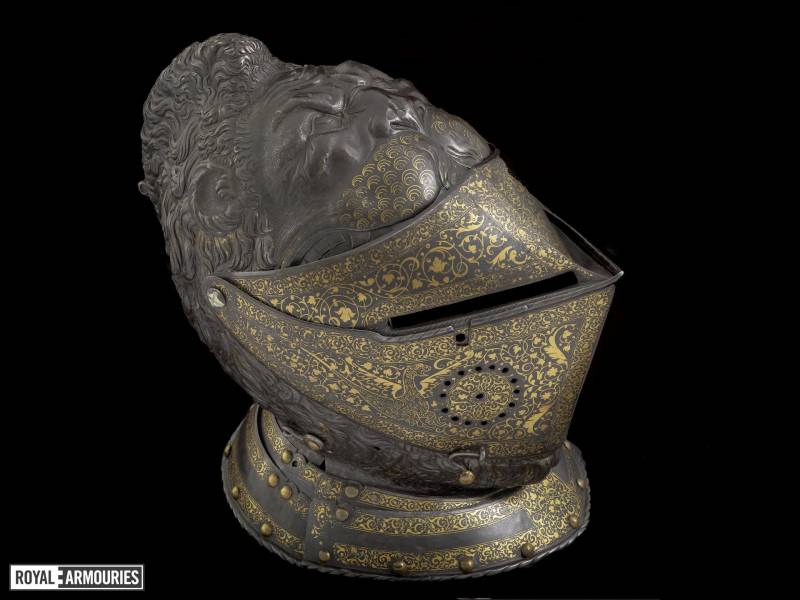 The lion's face is placed on the helmet in such a way that the hole for the face is in the place of the mouth ... 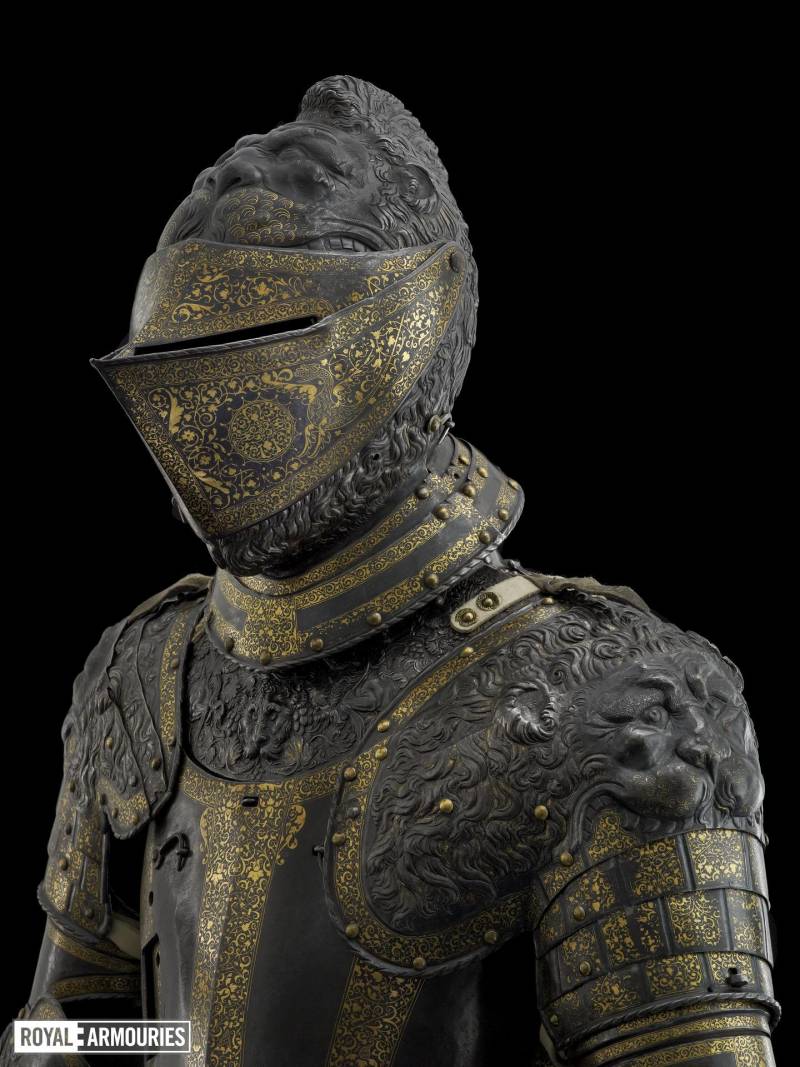 Shoulders of armor are also decorated with lion faces.
This armor, apparently, was in England from the mid-1620s, after which it was roughly altered, probably in order to increase the front opening of the helmet.

Between about 1640 and 1688, this armor depicted Edouard Montague, second Earl of Manchester, Charles II, Cosimo Medici, and General George Monk, Duke of Albermarle. By the end of the XNUMXth century, it was owned by John Cooper, a gunsmith of the Artillery Council, who apparently borrowed it for an exhibition in the Tower of London. There it was presented as the armor of Charles II and was on display of equestrian figures known as the "Line of Kings", and later was exhibited as the armor of Edward VI, and Charles I.

This armor, despite all its pretentiousness, is combat, and not ceremonial. This is indicated by the shoulder pads of different sizes and the presence of holes on the cuirass for the fore-lance hook. In addition, the shape of the left shoulder pad clearly indicates that the spear should have been clamped under the left arm. 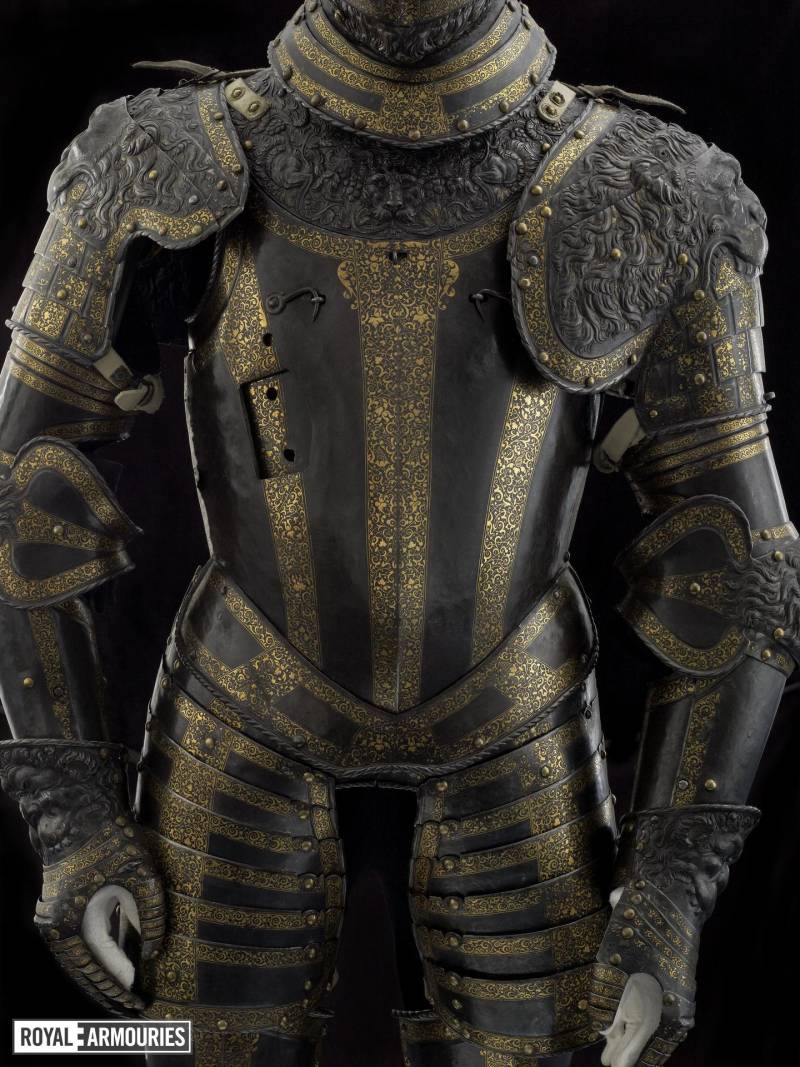 Here they are - holes for attaching a lance hook and shoulder pads of different shapes
However, the armor was made not in the traditional manner of the Middle Ages, but already quite "modern" (naturally for that time), that is, taking into account the use of firearms on the battlefield. 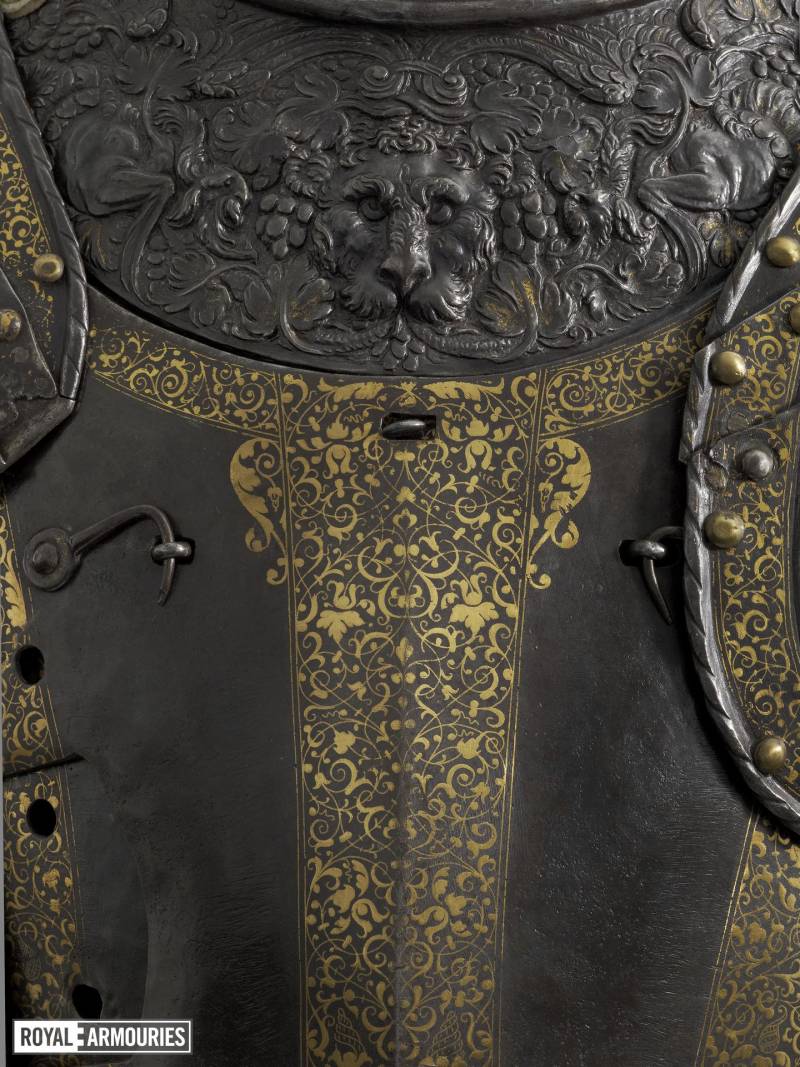 Take a look at these hooks on the cuirass. Do you know what they are for and what is locked on it? And they lock the "spaced armor" - the second invoice for additional armor, which became especially relevant after arquebusses, muskets and pistols appeared on the battlefield. 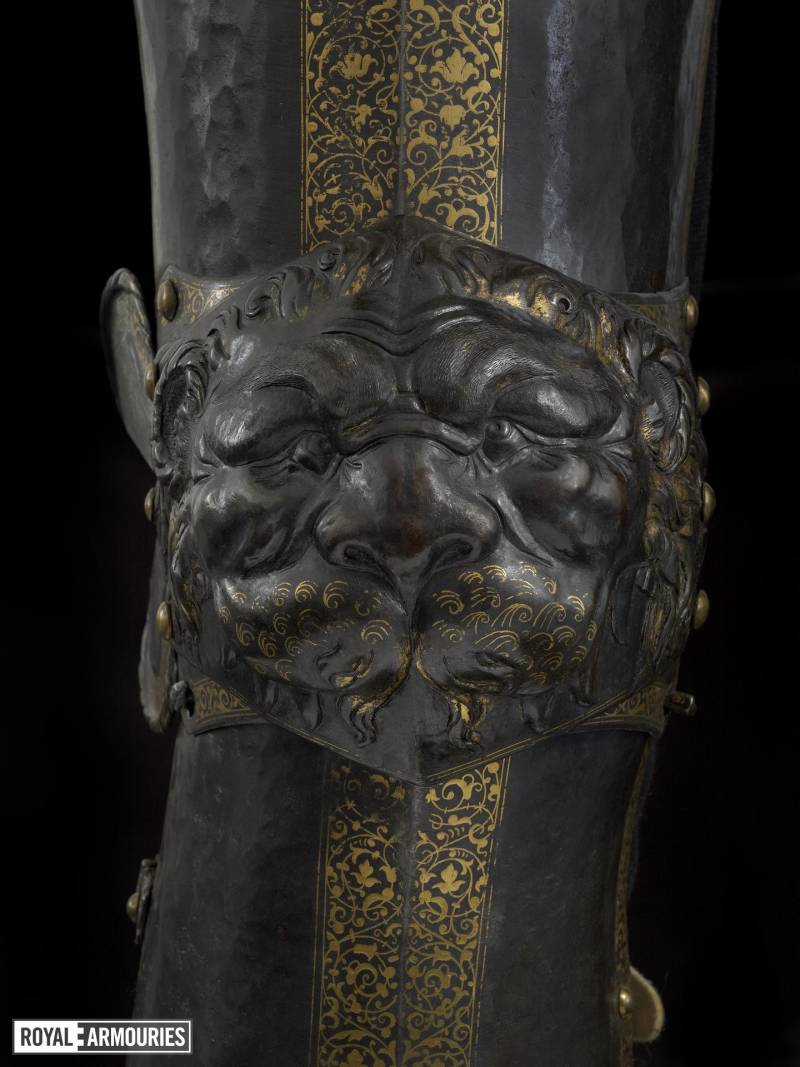 Lion face elbow pad. The peculiarity of the design of this armor was the combination of gold tapping with high embossing. 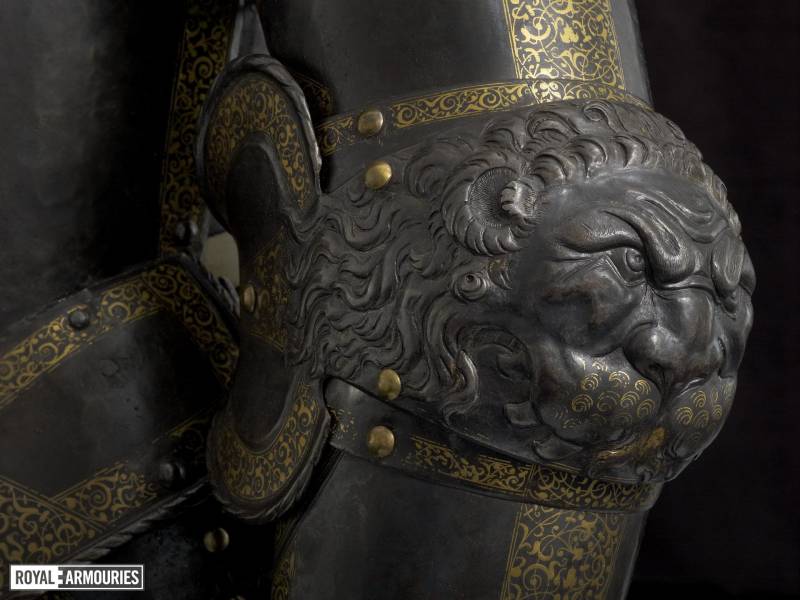 And this is a knee pad!
In an upright position (from the floor to the top of the helmet), the armor has a height of 1730 mm, that is, its owner was not tall. The weight of the armor is also not too large: 20,8 kg. 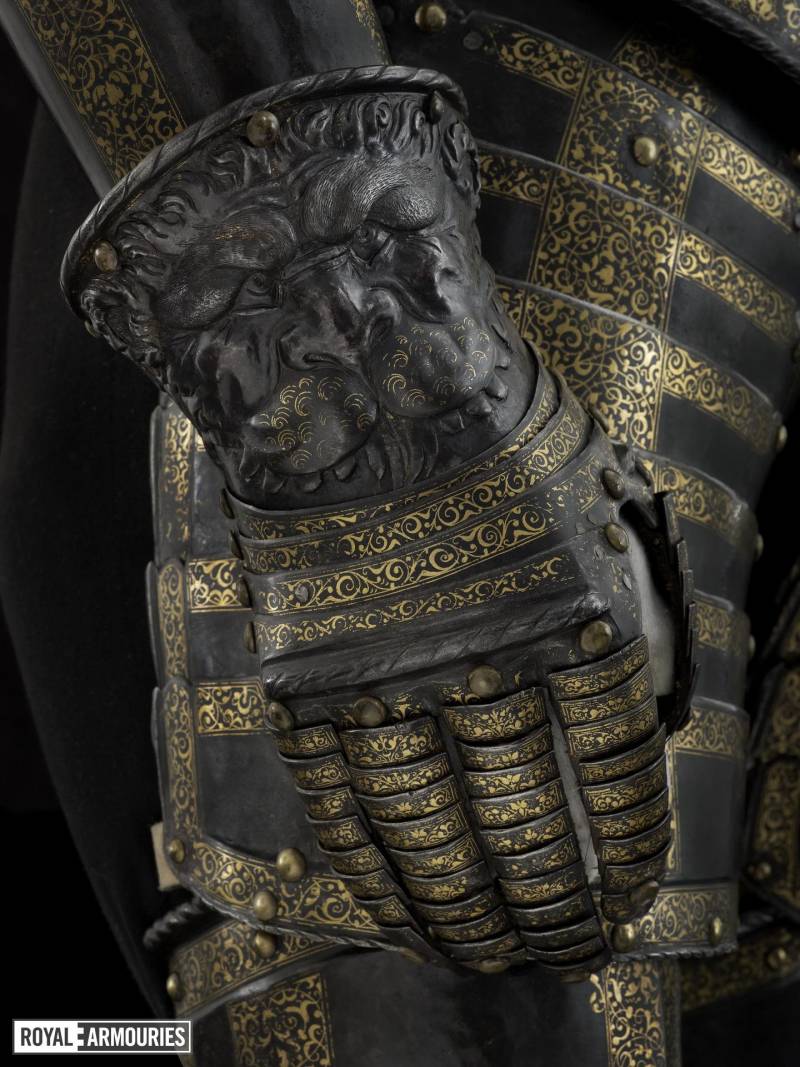 And all the details, including the plates on plate seals, are richly decorated with gold
And finally, plate gloves. Their sockets are also decorated with lion's muzzles, which means that the master had to make sure that the metal in this place was as thin as possible, otherwise it would not be possible to raise his hands in them. Well, and besides, they are clearly designed so that their owner can hold a pistol or a rapier in them, and not just a spear or sword. In this case, a plate gauntlet with one finger would be more suitable.

The armor has no plate shoes. Perhaps chain-mail stockings should have been worn over the entire foot. But on the other hand, plate “fingertips” are put on the forefoot (how else can you put it?), Also decorated with lion's muzzles.
Of course, the manufacture of such armor required an abyss of labor. Well, so how did the masters of that time work on them?

Drawings from the Royal Arsenal in Stockholm will help us learn about this. So... 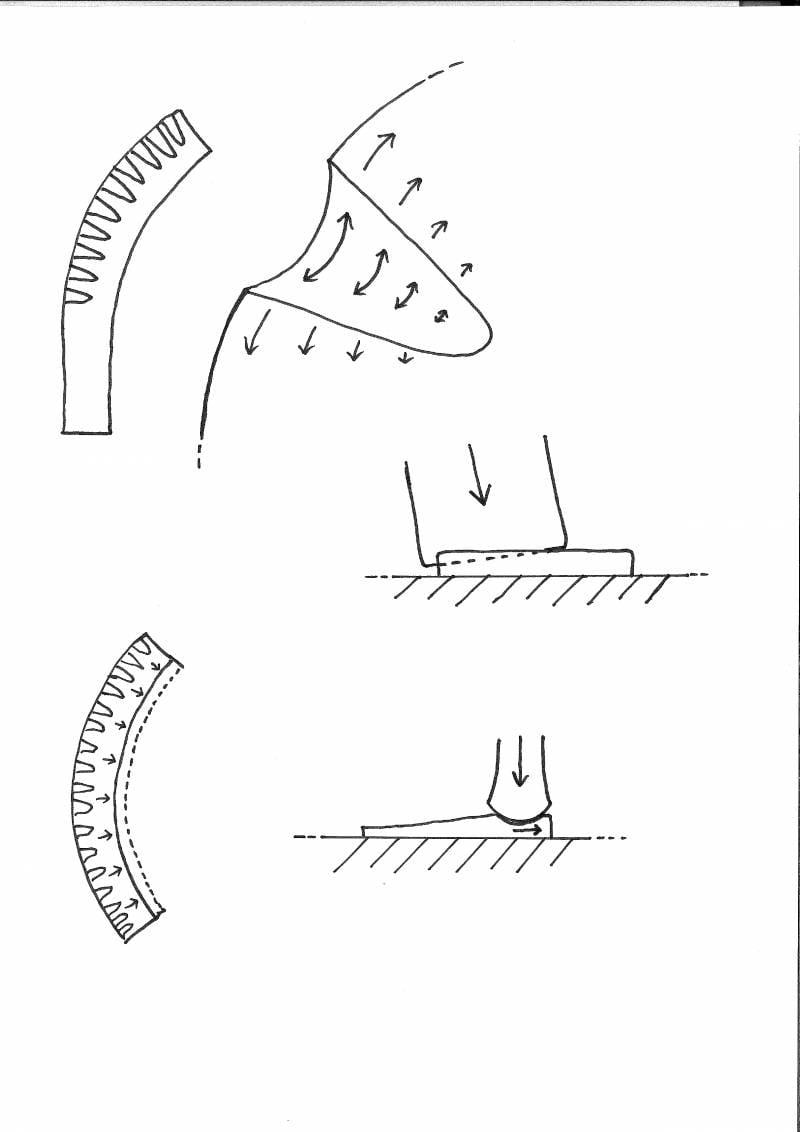 1. Since most parts of the armor have a round or curved shape, a flat sheet of metal is processed with a hammer with a semicircular working head, stretching the plate in two dimensions, like a fan 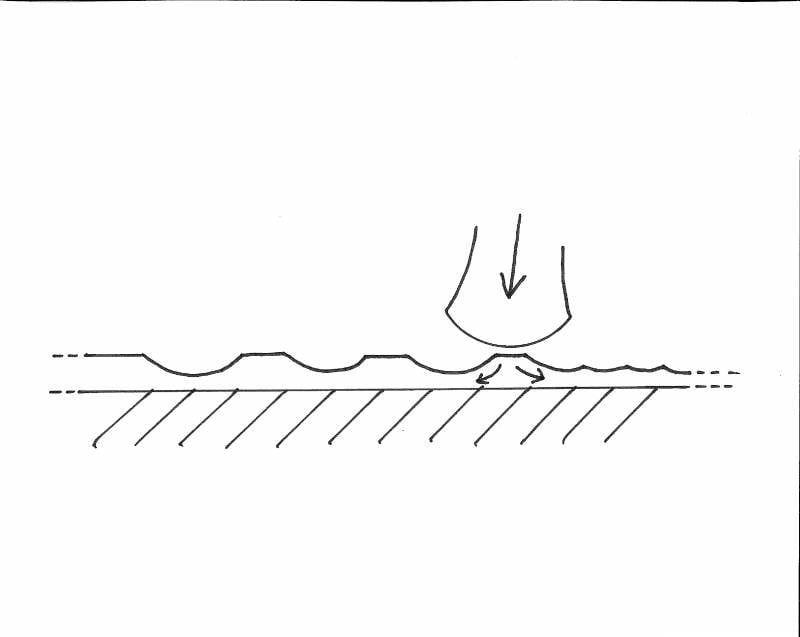 2. First, beat so as to obtain large indentations. Then they beat between them so that there are more depressions, but they themselves are smaller in size. The plate gets thinner and longer 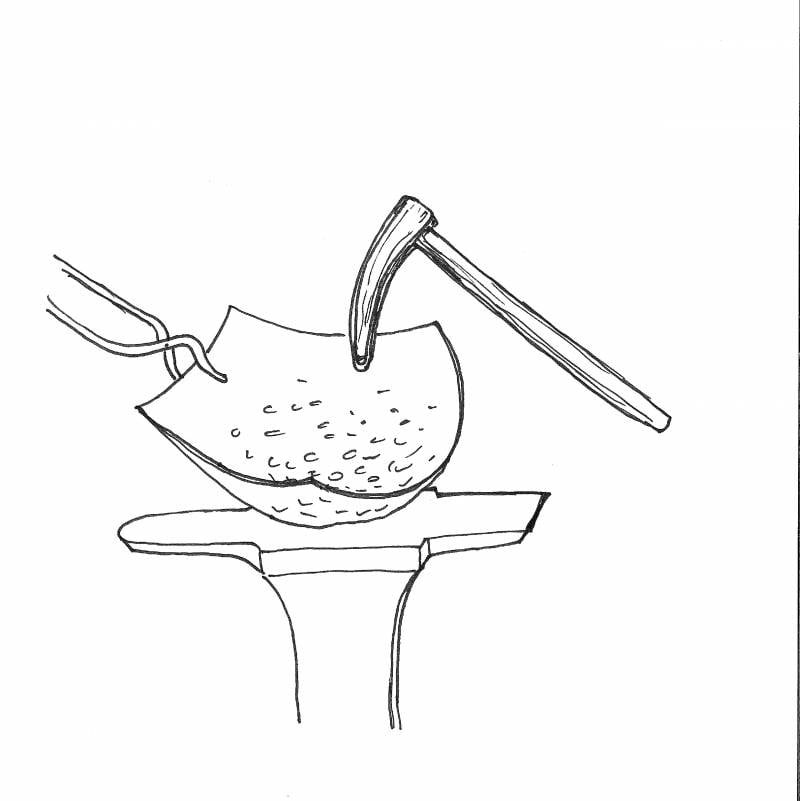 3. A round hammer ("hammer-beak") stretches the plate in all directions, allowing you to create bowl-shaped parts 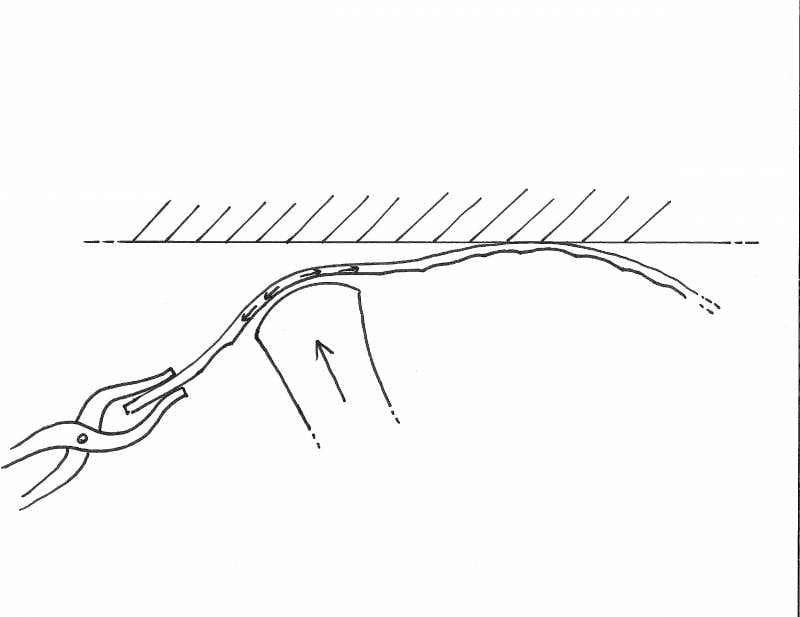 4. Stretching is performed by blows "in the air". That is, you are not hitting the plate against the anvil, but slightly next to it. 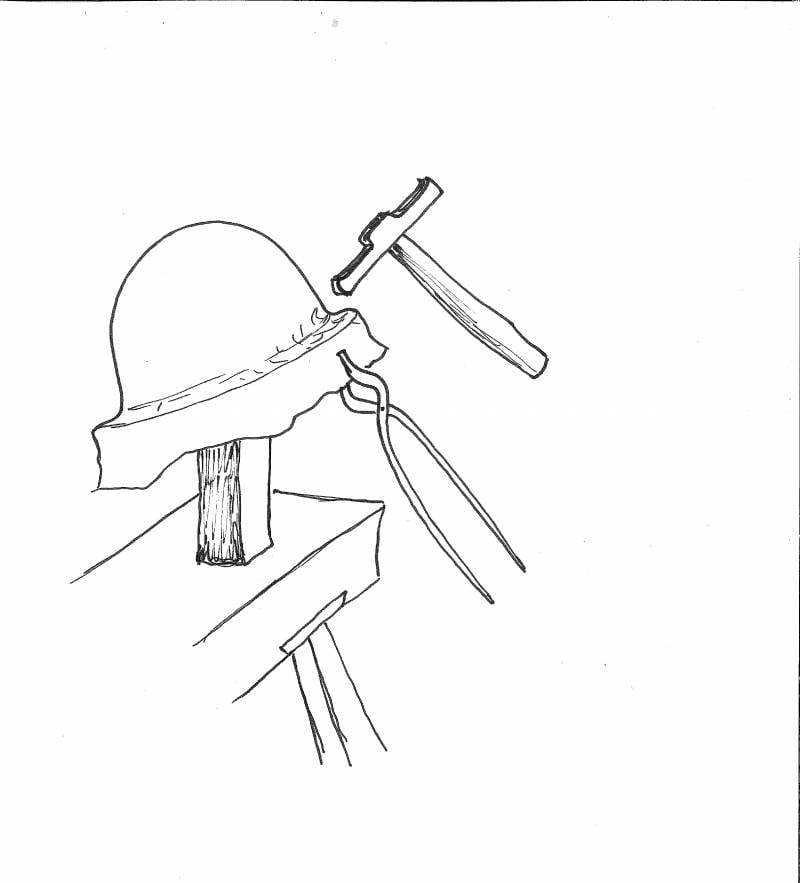 5. In order to make a hemisphere, a metal sheet is processed on a special mandrel and simply stretched along it, after which the excess metal is chopped off 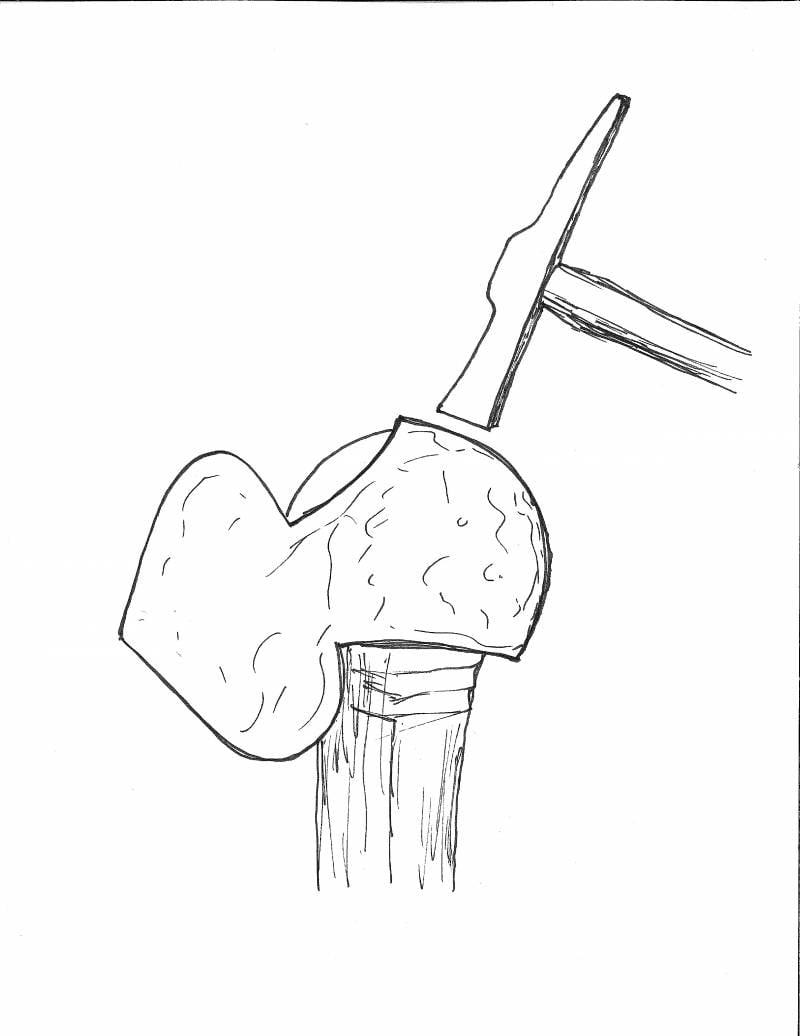 6. The hammer when processing such convex parts is used flat, so dents and irregularities are leveled 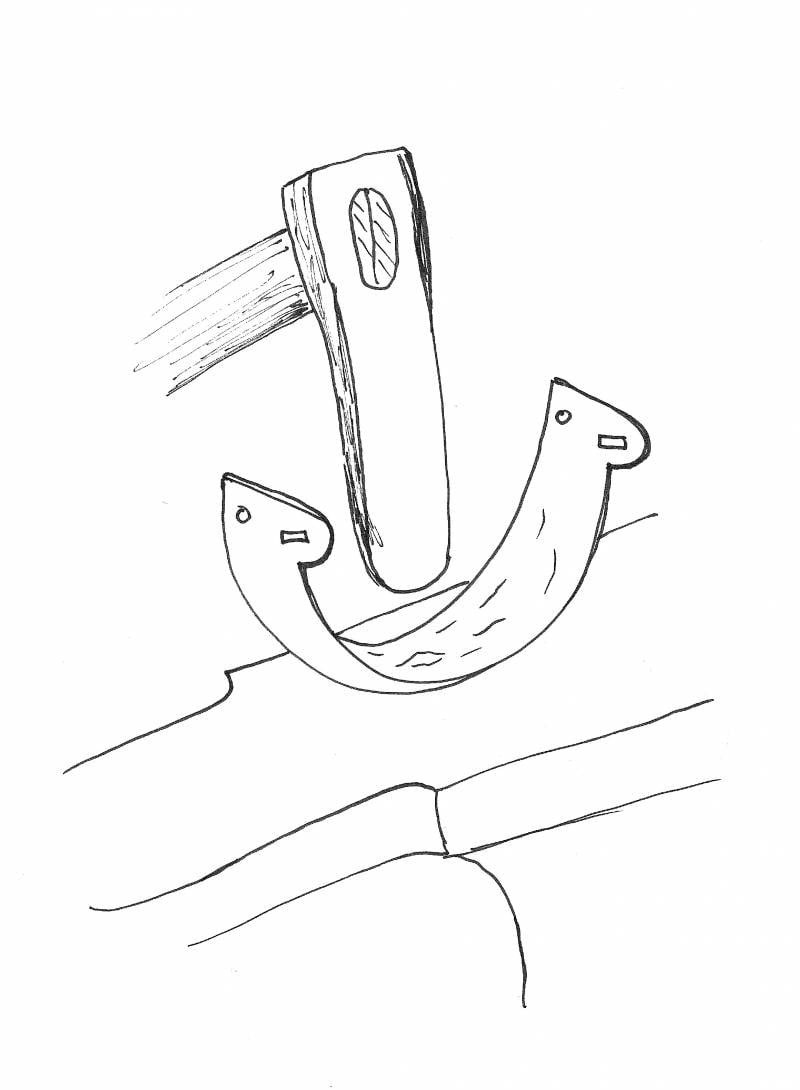 7. Plates of parts such as bracers are often not flat, but slightly convex, which improves their strength and protective properties. In this case, the finished part is processed with such a hammer. 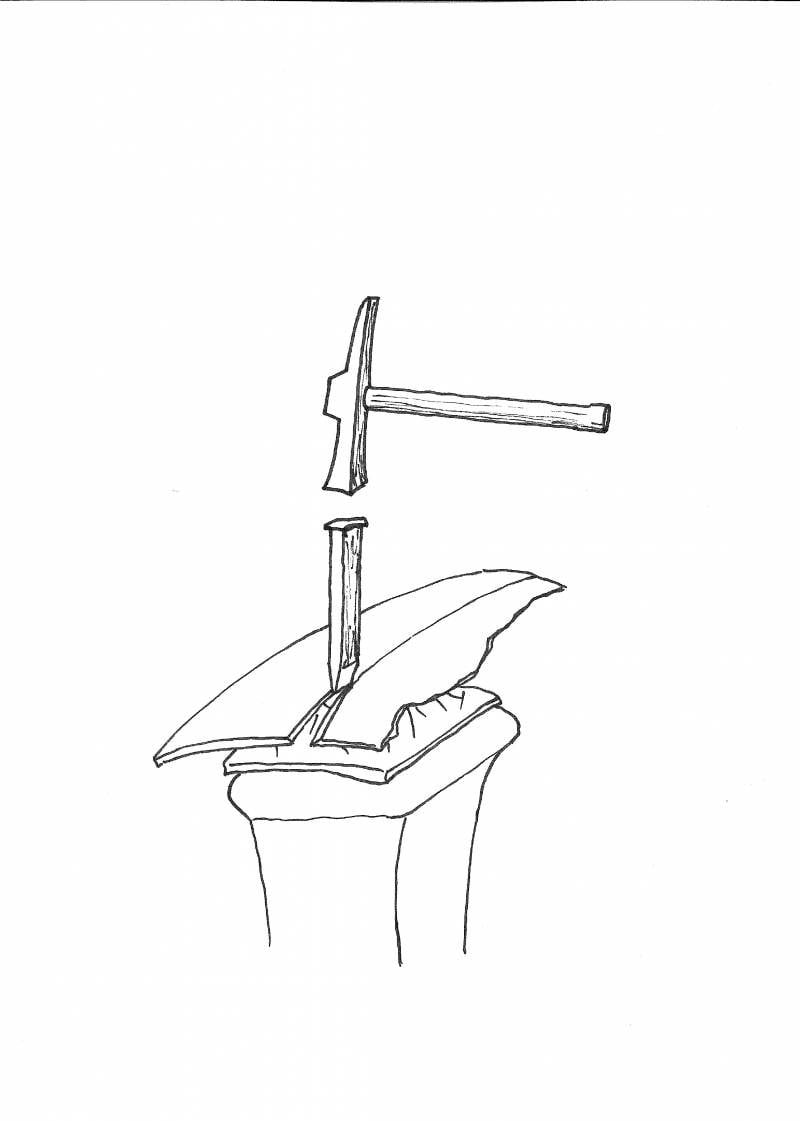 8. The excess metal of the armor parts is cut off on the anvil with a chisel, but at the same time they put a soft cloth, and on it there is also a “sacrificial plate” - a special sheet of metal that allows not to crush the edge of the workpiece during cutting! 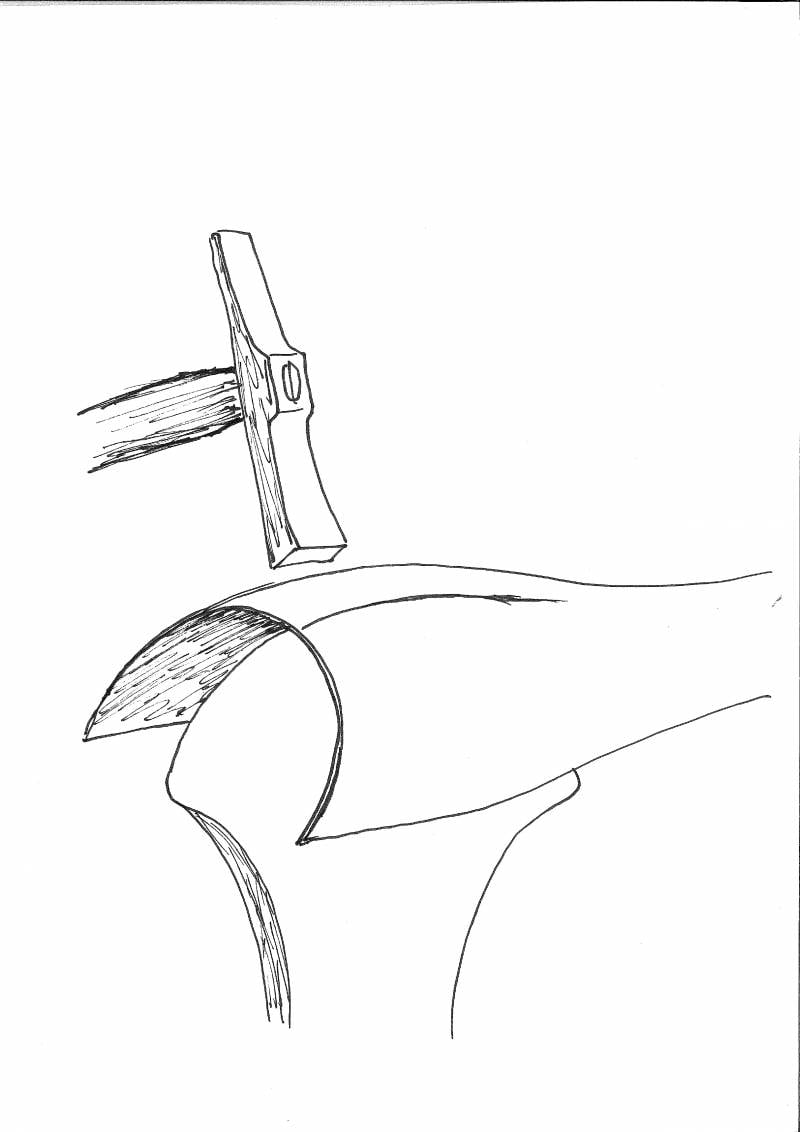 9. Some parts of the armor have ridges that increase their strength and protective properties. To make them, special mandrels were invented. 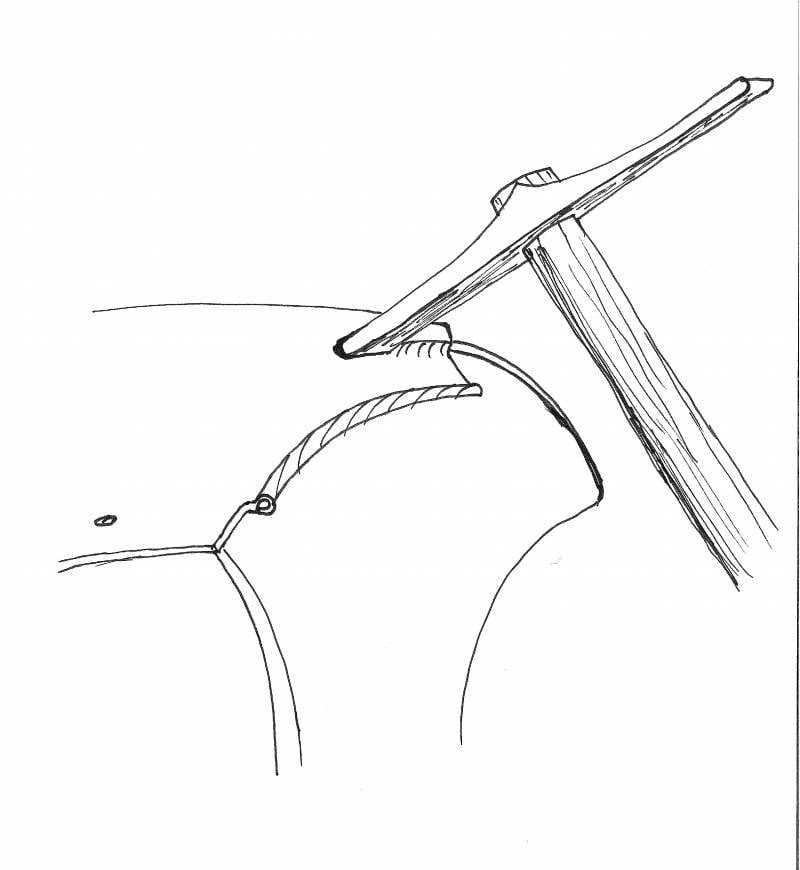 10. The comb is knocked out with a flat hammer on a mandrel. First you hit each side of the ridge with a hammer, finally, the mandrel is driven very neatly into it. 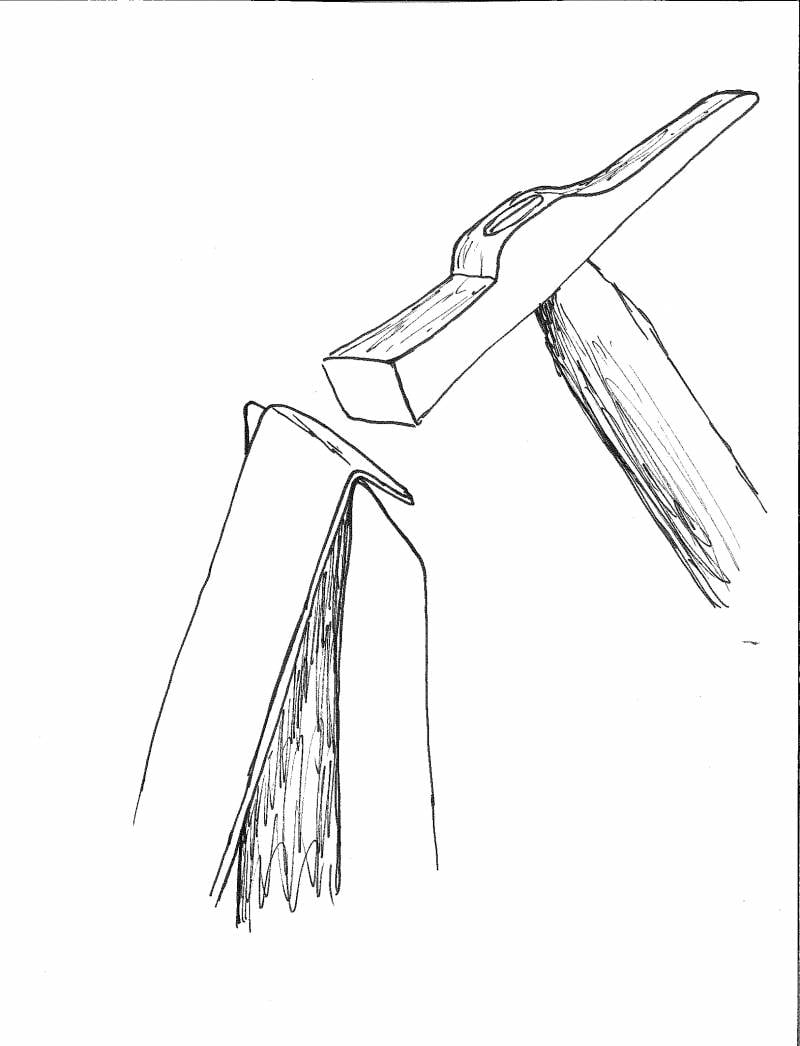 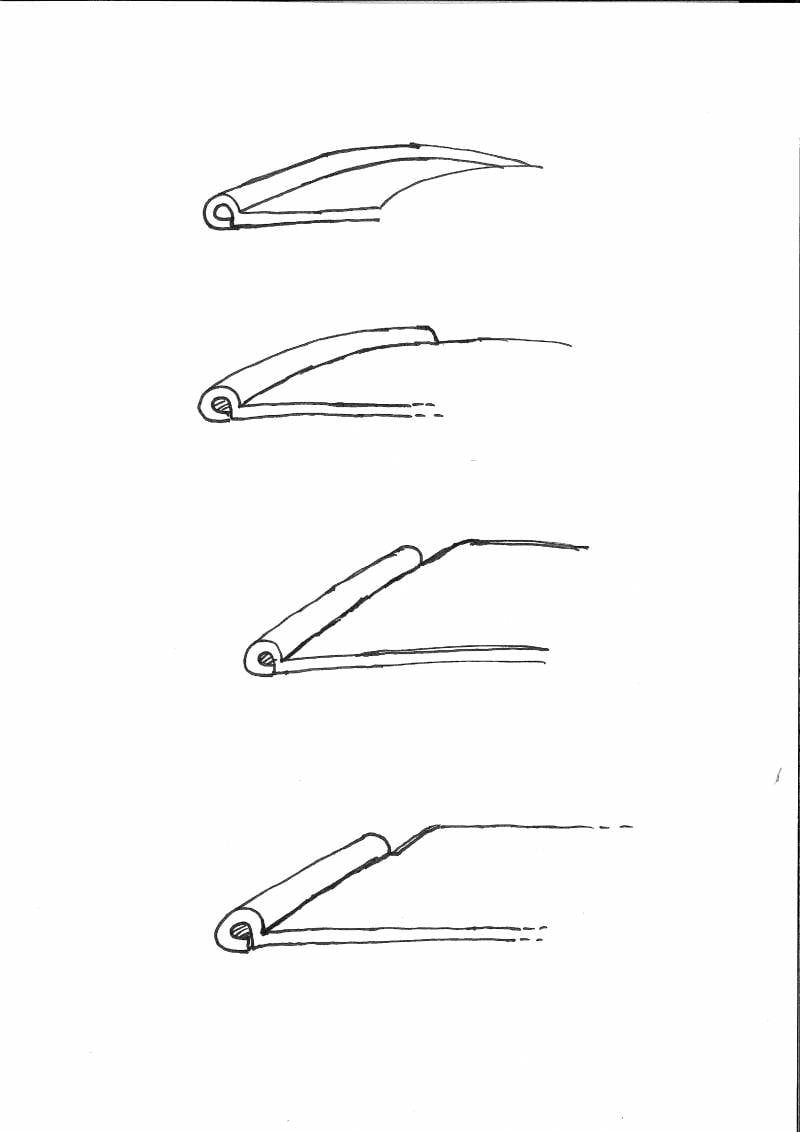 12. "Rolled Edge". Many parts of the armor have a curled or folded edge, partly to make it stiffer, and partly to avoid injury from sharp edges. They do it both hot and cold. 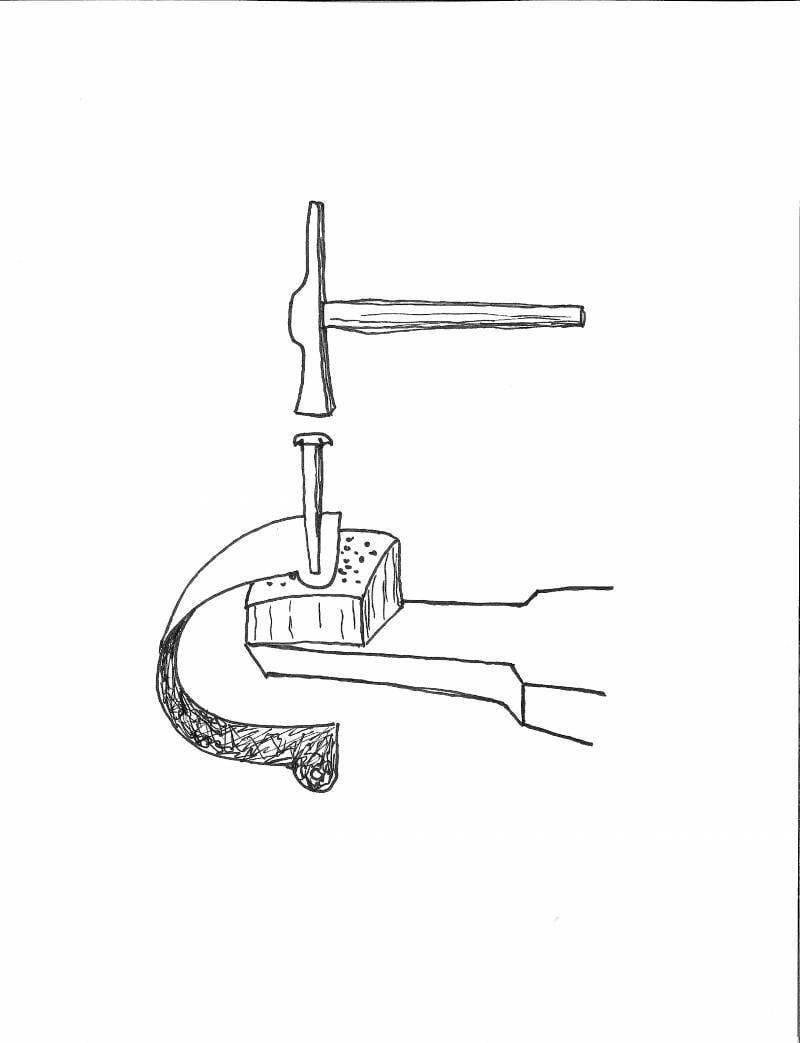 13. Holes on parts were often not drilled, but punched, preheating them in order to relieve the arising stresses 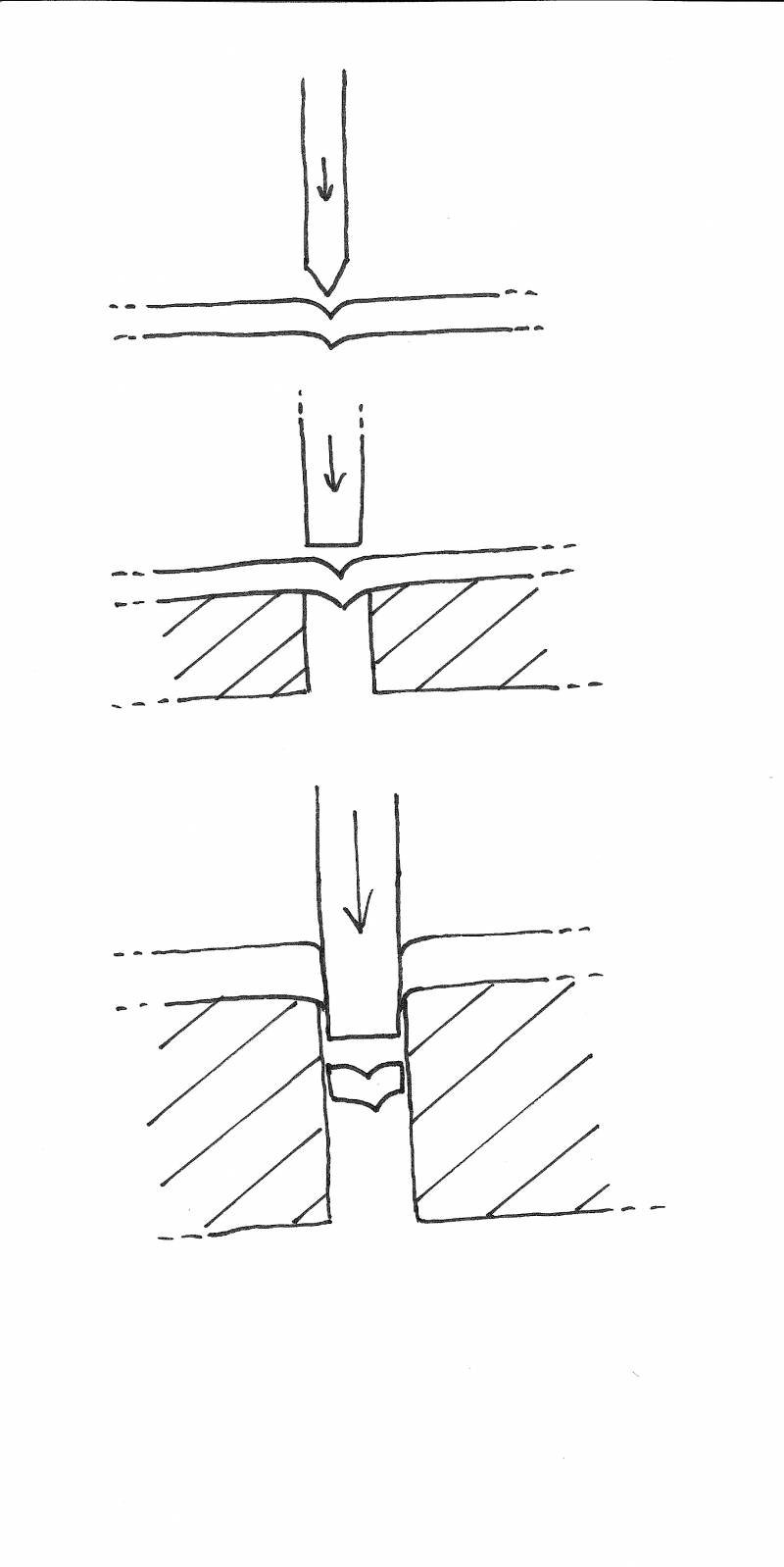 14. However, this operation was carried out sequentially, using three punches of different diameters! 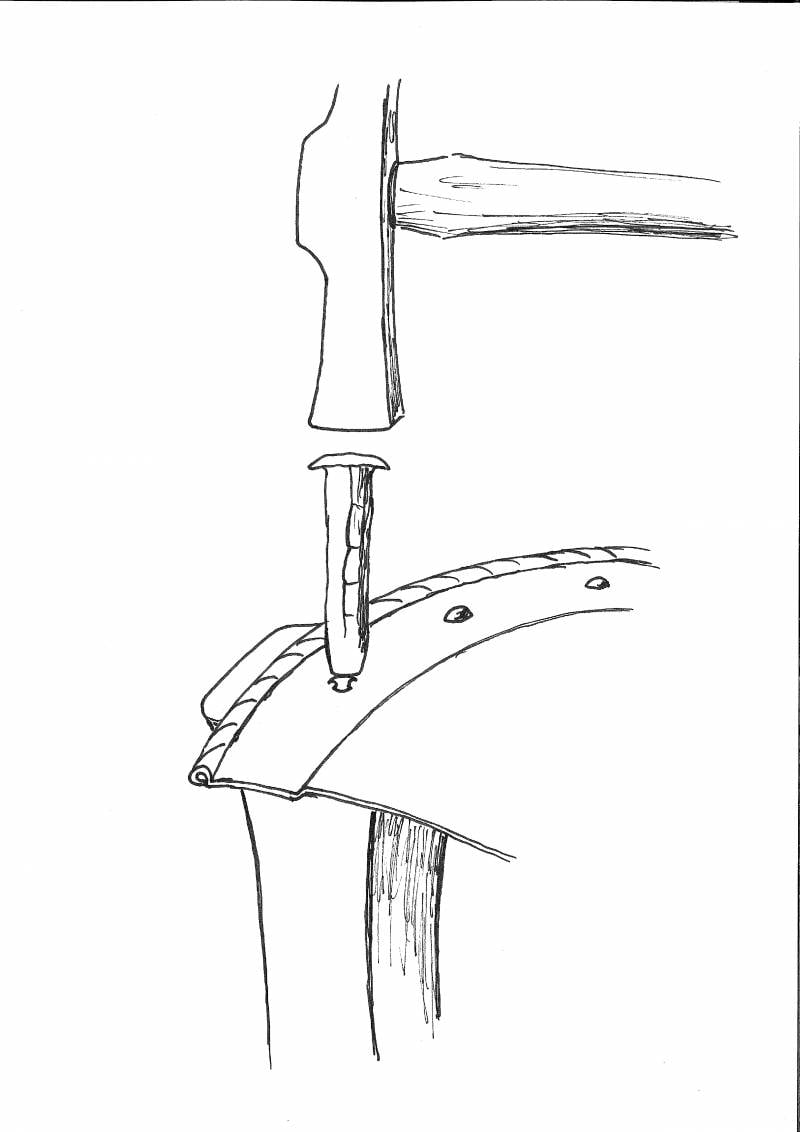 15. Riveting. All parts of the armor are somehow riveted to each other or riveted to the skin. It was possible to rivet in several ways: for example, with a hammer or a rivet mandrel, as a result of which a neat convex rivet is formed. Cold riveting 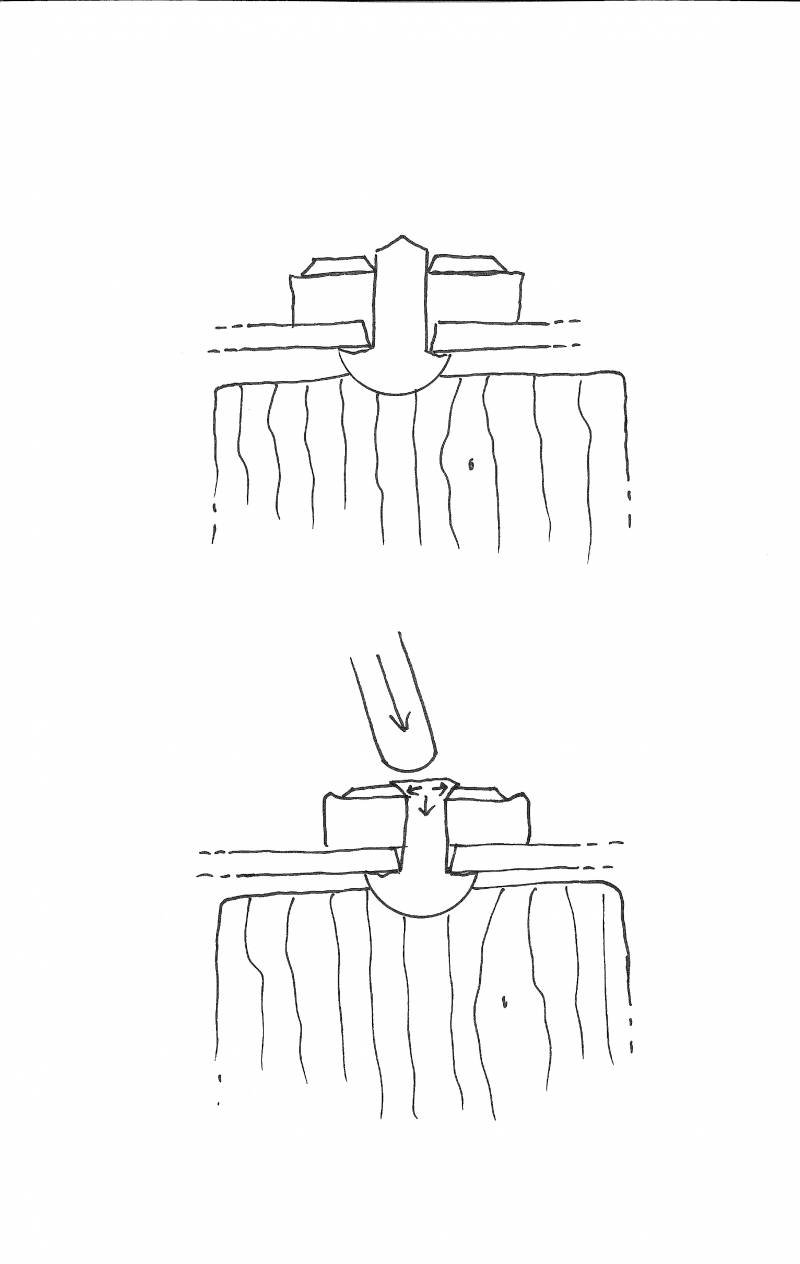 16. Rivet of a leather strap with a rivet. The rivet cover is pressed against the hard end of the wood, the sheet metal and washer are put on the rivet. Then the rivet is crimped with hammer blows
As you can see, everything is not so difficult.

There are people who cold forged such armor in their kitchens, and annealed them on a gas stove. True, how their wives and neighbors treated this, I do not know. But they made the armor!