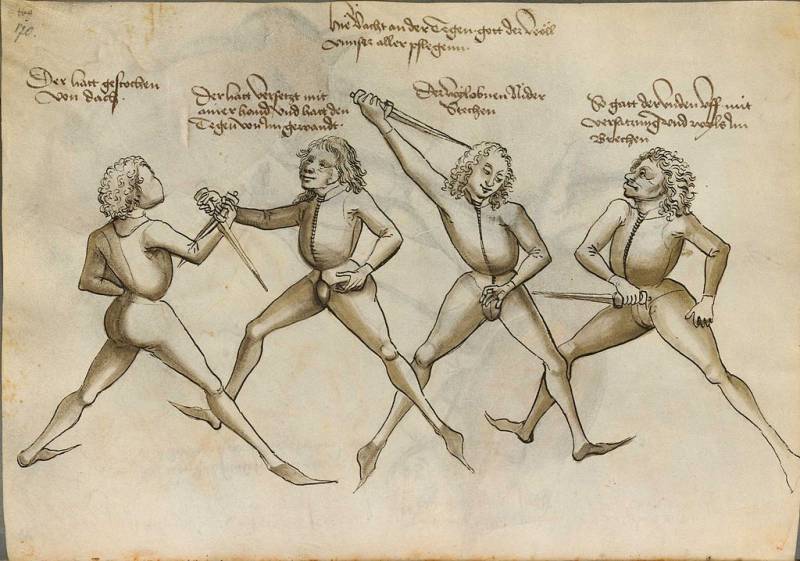 "Let it be, knight, everywhere and everywhere
A dagger with you until the end of days
Behind the belt or bosom,
That is, perhaps, rather.
While he is with you, that talisman,
You will go everywhere and everywhere,
And he will cut all the secret networks,
Which you will fall into.
He will cut all the secret bonds at once,
Will not touch only those networks
With which he is tightly bound to you,
That is, perhaps, more true. "
("Dagger" words: P.E. Rummo)
Museum collections of knightly armor and weapons. So, last time we started with the fact that in the Middle Ages there were several types of daggers that were used by both knights and commoners. Often in literature we find such a name for a dagger as "misericordia" - "God's mercy", with which they were just the defeated ones. But this is not a type of weapon. A generalized name for almost all daggers of that time. It was just that they all had the same purpose. Hence the common name! Well, today we continue to get to know them and start with such a popular and deadly perfect dagger as the rondel.

It was known already from the middle of the XIV century, and got its name for the shape of the top of the handle and the guard. Both of these parts were in the form of discs, between which the hand was directly clamped. The discs prevented the hand from sliding off the handle, although they limited the variability of fencing with such a dagger. Obviously, it was intended to deliver powerful thrusting blows. But their blades were of different shapes. Quite often the handle of this dagger, pommel and guard were made in the form of a single one-piece piece. It should be noted that the narrow and faceted blades of the rondels appeared earlier than that of the bullocks, and much earlier than that of the stylets.

That is, it was a purely military dagger. Which, however, was also worn with a casual suit. After all, there have always been people who wanted to emphasize their social belonging. Daggers of this type are depicted in many miniatures and belong to many effigies, which confirms their distribution.

Dagger rondel. Unknown master. France, approx. 1400-1450 Materials: steel, copper alloy and wood inlaid. Length: 39,4 cm, weight: 0,41 kg. The dagger was found in a peat bog. There is a copper inlay on the handle. Wallace Collection, London
If before the effigii did not have daggers, then in the transition period from chain-plate armor to all-metal armor, very many have daggers, although still not all. Moreover, they began to be attached in a very original way. If earlier the dagger was worn on the knight's belt on the right, now ... its scabbard was simply attached to the skirt of the cuirass. Most likely there was a leather scabbard loop. But it is quite possible that the scabbard was simply riveted to the skirt so that there was not the slightest possibility of losing it.

For example, the breaststroke of Nicholas Barnell, who died in 1382 by Aston Barnell. As you can see, he has a "dagger with kidneys" hanging from his belt 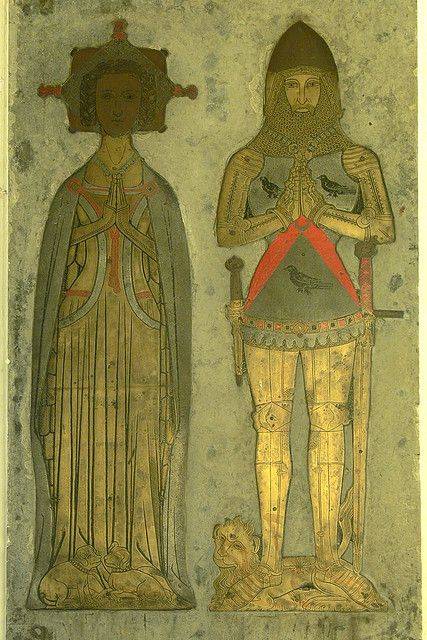 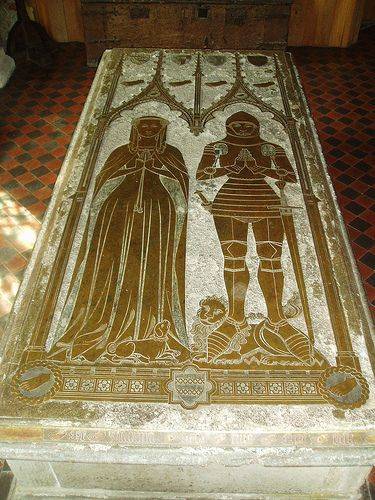 Another twin tombstone decorated with "brass" and belonging to a certain Thomas Cruvey of Wicksford. His dagger sheath is just attached directly to the skirt of the armor. 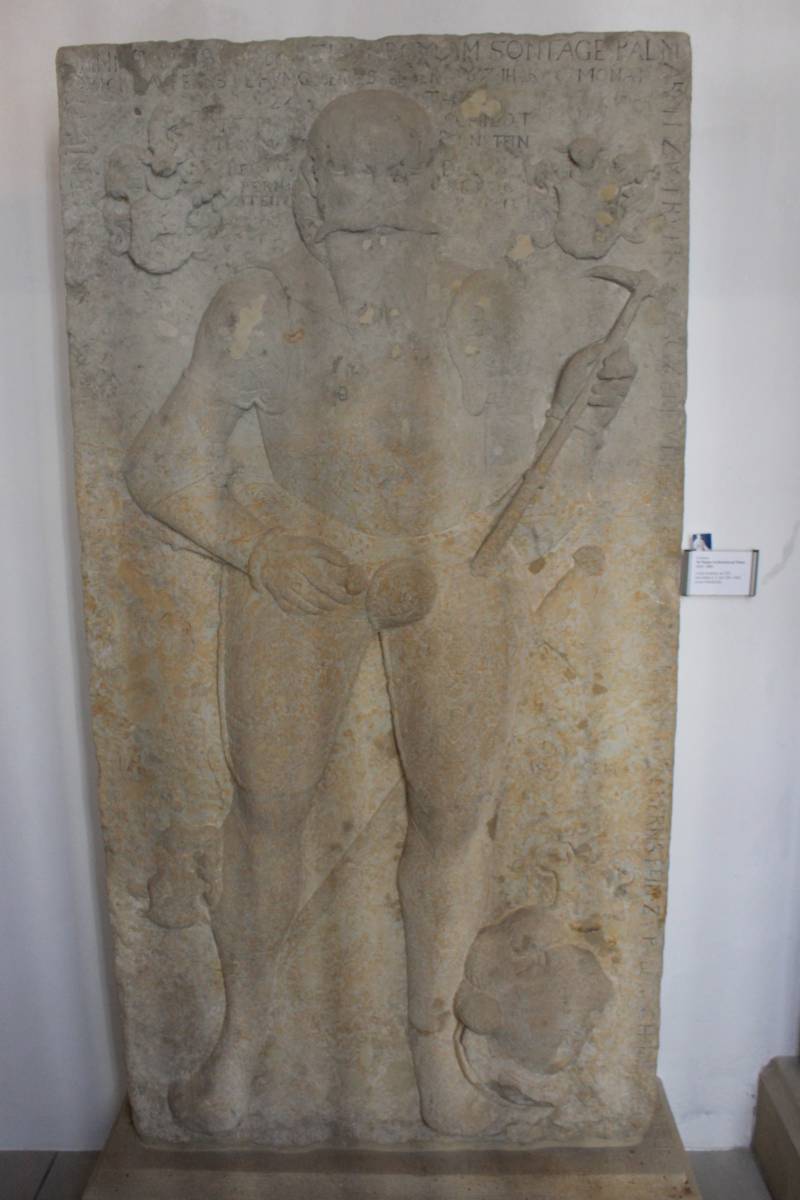 Tombstone from the City Museum of Meissen, XNUMXth century. She is wearing a very well-armed man: a sword, a cavalry coin and a dagger. It is not very visible, but it is there. A very rare effigy for a set of weapons. Photo by the author
The "eared dagger" is a very strange weapon that has spread in Europe since the late XNUMXth - early XNUMXth centuries. It had a pommel in the form of two slightly inclined rounded protrusions, similar to ears. As such, he did not have a guard at all. The smallest type of dagger in medieval Europe. Its origin is unclear. The Turkish scimitar had something similar to his "ears". At this time, Balkan mercenaries appeared in large numbers in the European armies - stradiots who had scimitars. But the scimitar ... it is a scimitar, and its resemblance to the "eared dagger" is only the smallest.

"Long-eared dagger" approx. 1500 Made in Venice, Italy or Spain. Finished with horn and copper alloy details. Length: 21 cm (blade), weight: 0,225 kg. A blade with a protruding edge, cruciform. Short ricassos. Wallace Collection, London
By the way, the shape of the handle of this dagger was generally very popular at that time and is found quite often. For example, you can see her at the knight on this tombstone ... 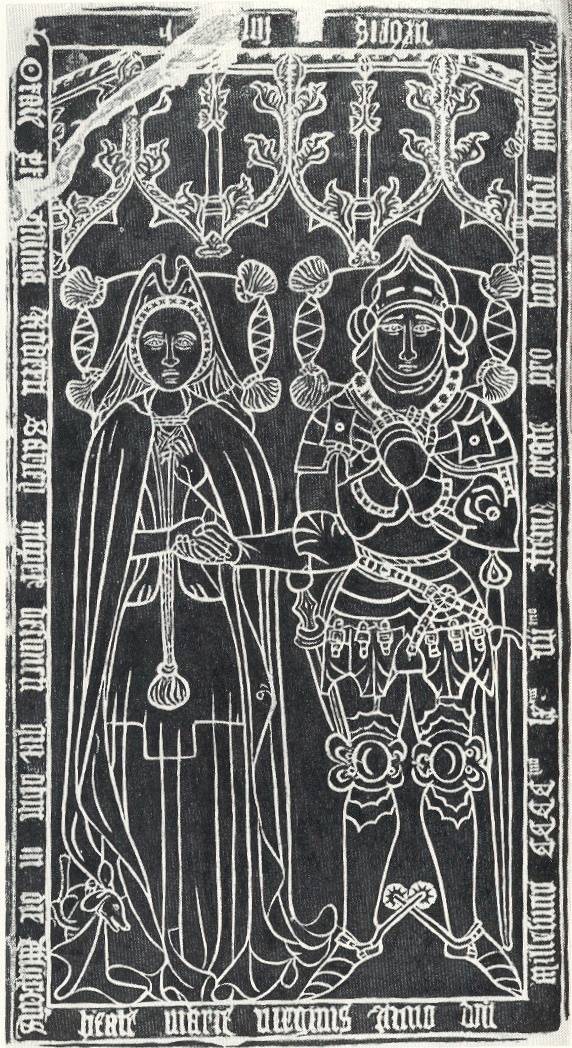 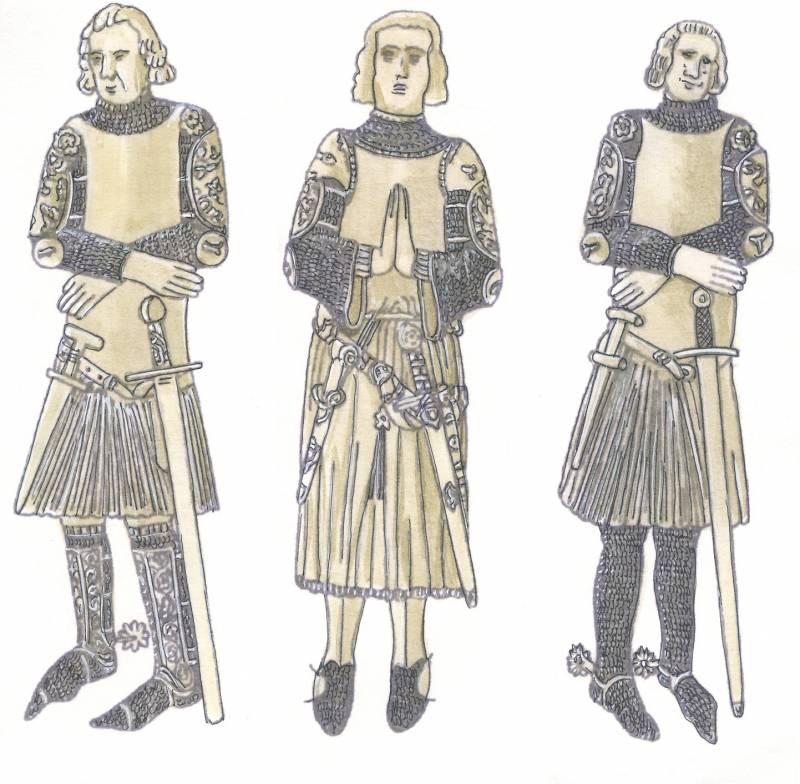 We have before us very interesting Italian effigies of the XIV century (drawing by A. Sheps from the contour drawings by D. Nicolas). Very characteristic armor and weapons. All have overlaid plates made of "boiled leather" decorated with embossing over their chain mail. It is impossible to find out whether they were gilded or not, but Italian craftsmen loved to gild products made of "boiled leather". The two extreme figures of the dagger have typical baselards with H-shaped handles. But the central figure has an unusual dagger. This is clearly a bullock, but ... with two ears! So there could be such hybrids!
It should be noted that the Italians were generally great inventors at that time. Didn't they come up with the famous "Milanese armor" and the Cinquedea dagger? The latter, however, was not chivalrous and is absent in effigia. But the townspeople wore it very often and used it just as often! They appeared somewhere in the 1450-1460s and were popular for a hundred years, and then disappeared from everyday life. For example, such a dagger from the Wallace collection ...

Cinquedea, approx. 1500 Italy. Unknown master. The handle and pommel were restored in the 32,4th century. Materials and technologies: steel, bronze, gold, copper and wood, gilding and etching. Length: 0,6 cm (blade): weight: XNUMX kg. Wallace Collection, London
During the Renaissance, the so-called "Holbein" daggers were also very popular. Here is one of them ...

Dagger with "Holbein" type scabbard. Dark wood handle, ribbed and convex in the center, topped with a gilded bronze rim at the top, with a short boat-shaped guard also in gilded bronze, cut with swirls and traditional flowers; blade "diamond cut" with the manufacturer's stamp on one side. Materials and technologies: steel, wood, bronze, gold and velvet, gilding, carving, perforation and chasing. Length: 24 cm (blade), width: 3,9 cm.Weight: 0,28 kg. Wallace Collection, London
By the beginning of the XNUMXth century, and a dagger with a very thin faceted blade, reminiscent of a stylus - a stick for writing on wax, which served as the basis for its name - stiletto (stiletto). Usually these were small "ladies'" daggers. 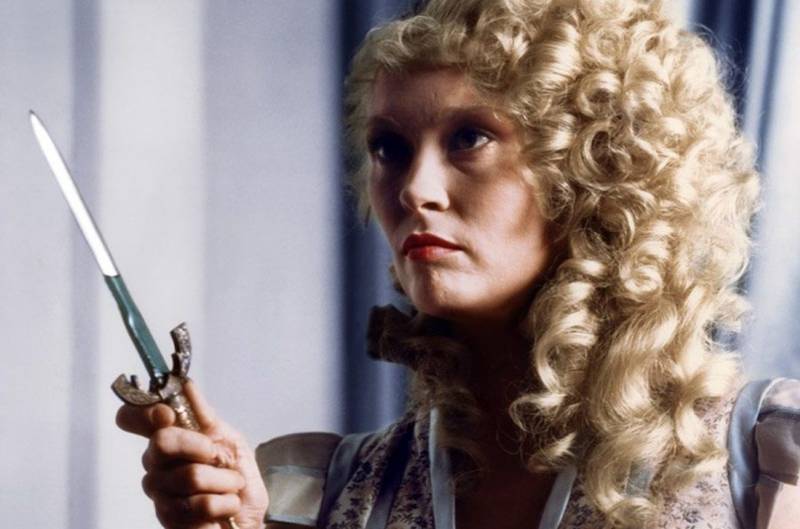 A still from the film The Four Musketeers (1974). As Milady Faye Dunaway. I don't really like her outwardly, but her dagger is good. Not quite a stiletto, though. The blade is not the same ...

English or Scottish dagger of 1610 with a richly inlaid gold blade. Just such a Milady would be very suitable ... Wallace Collection, London 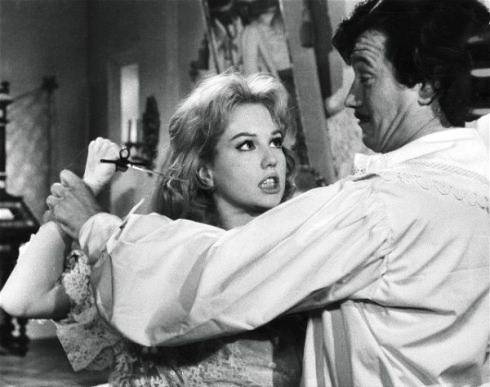 And here is a shot, although not in color - a classic of the genre: my lady - Mylène Demonjo is trying to stab D'Artagnan (Gerard Barre) with a stiletto in the 1961 film The Three Musketeers directed by Bernard Borderi
A variation of the XNUMXth century stylet was again the Italian fusetti blade, with a measuring scale applied on it. This weapon was relied on by the state of the Venetian naval artillerymen. 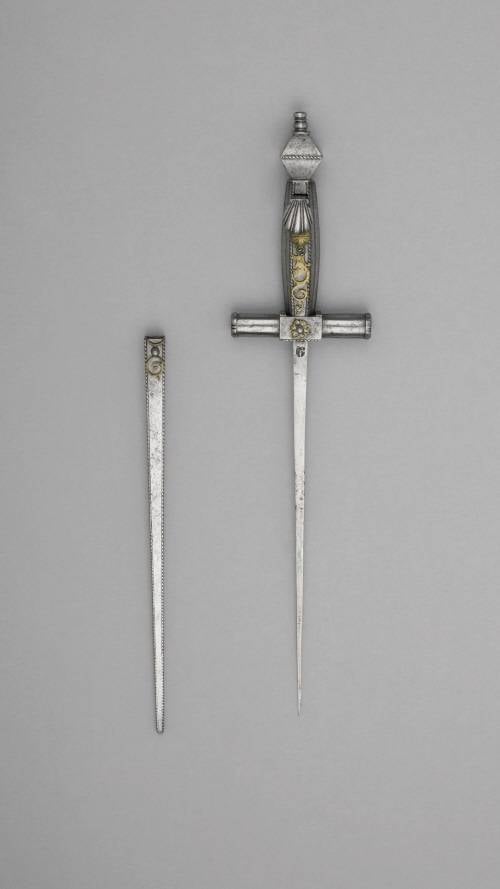 Combined stiletto. OK. 1660 Germany. Unknown master. Material: steel and copper alloy. Length: 36,6 cm (total), blade length: 23,5 cm, width 6,1 cm.Weight: 0,32 kg. The scabbard is a square steel scabbard with beveled edges and four holes, one of which corresponds to a hole on one side of the blade, the others probably served to fix hammered copper ornaments, which, with the exception of one, are currently missing. Wallace Collection, London
Known are the original combined stilettos, representing a whole "headset". For example, the stylet could include a key for cocking the spring of a wheeled pistol, and its hollow handle served as a container for priming powder. The amount of the discharged charge was regulated by the size of the measuring container.

Famous stilettos-compasses. Their blade consisted of two parts, connected by a hinge. It was a handy device, to be sure ...

Italian stylet-compass with a blade, the double blades of which have a triangular cross-section, when connected, form a rhombic blade. OK. 1600 g. Total length: 52,5 cm, blade length 40,3 cm, weight 0,87 kg. Wallace Collection, London
Interestingly, the views of weapon historians on some of its types have changed greatly over time. For example, the same Vendalen Beheim, who seemed to be well versed in weapons, once wrote that a parrying dagger with an openable (he has a "scattering blade") served to ... expand the wound. "After striking, they pressed on the spring and quickly pulled the blade out of the wound in an already open position". The editorial staff of the St. Petersburg Orchestra publishing house, which republished his book Encyclopedia of Weapons in 1995, considered it necessary to write in a footnote to this phrase that such blades served to catch the enemy's weapons and were largely a means of psychological influence. And the prick itself with such a dagger happens so quickly that this is hardly possible at all. Although for some fantasy, this use of a dagger with a blade that opens into three parts is not a bad idea at all! 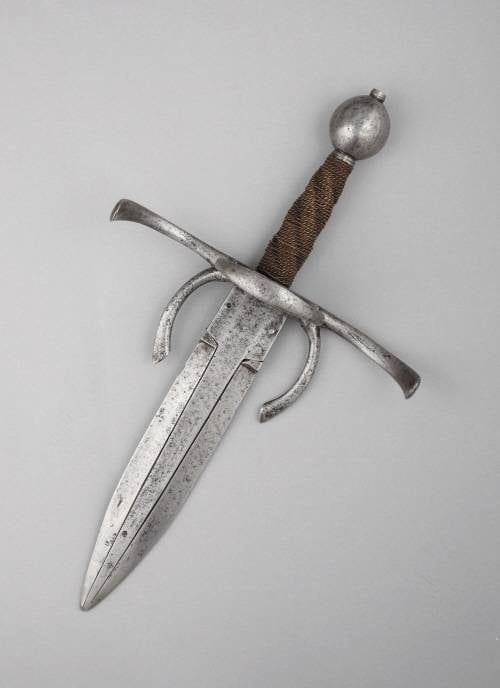 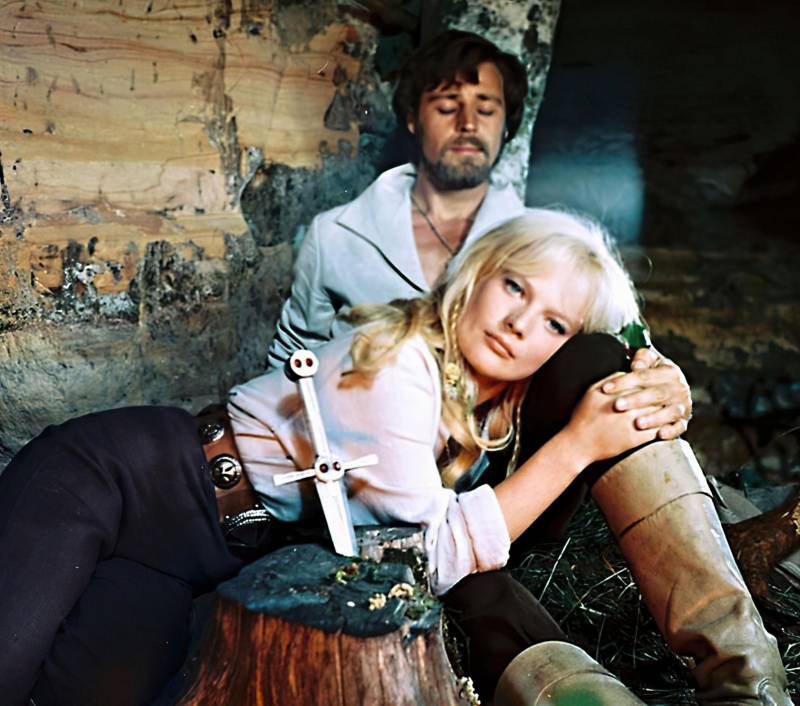 A shot with a dagger from the movie "The Last Relic" (1969). A beautiful dagger was made for the main character, to be sure ...
It remains to say a few words about the dagger from the movie "The Last Relic" (1969), where exactly this weapon plays a very important role. Outwardly, it is very similar to the stiletto from the Wallace collection, but it is larger in size. However, some examples of edged weapons were not spawned by the wild imagination of its masters. Not to mention the fact that almost anything could be done for cinema too.

And the last one is the combined daggers, one of which is shown in the photo below. 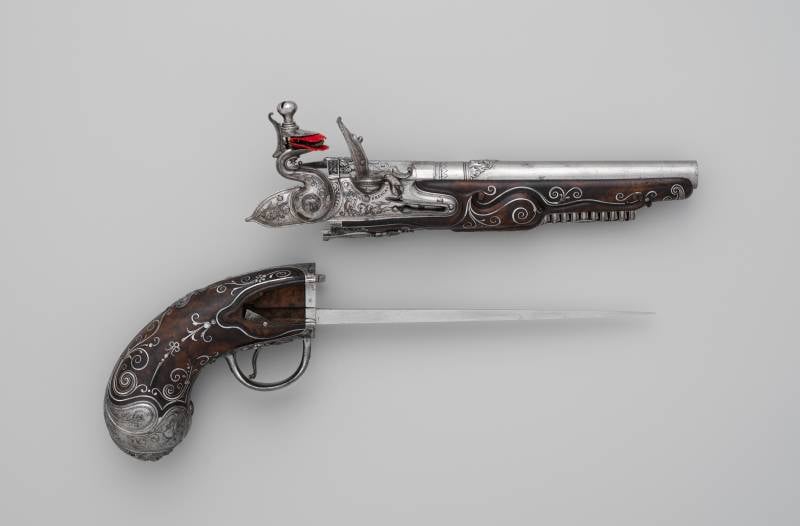 This is a combined weapon, combining a dagger with a pistol, the work of the master Matteo Cecchi, nicknamed Aquafreska (1651-1738). OK. 1690 Dimensions: 26,35 cm, barrel length 16,51 cm. Caliber 12,2 mm. Blade: 15,88 cm long.Metropolitan Museum of Art, New York
However, it is possible and necessary, of course, to tell in more detail about combined weapons. It will be about him next time ...

PS Photo effigy provided by the British Society of Medievalists.

Ctrl Enter
Noticed oshЫbku Highlight text and press. Ctrl + Enter
We are
Chernobyl notebook. Part of 3The hunt for the Blackbird
Military Reviewin Yandex News
Military Reviewin Google News
171 comment
Information
Dear reader, to leave comments on the publication, you must sign in.