Arkaim and "Country of Cities" 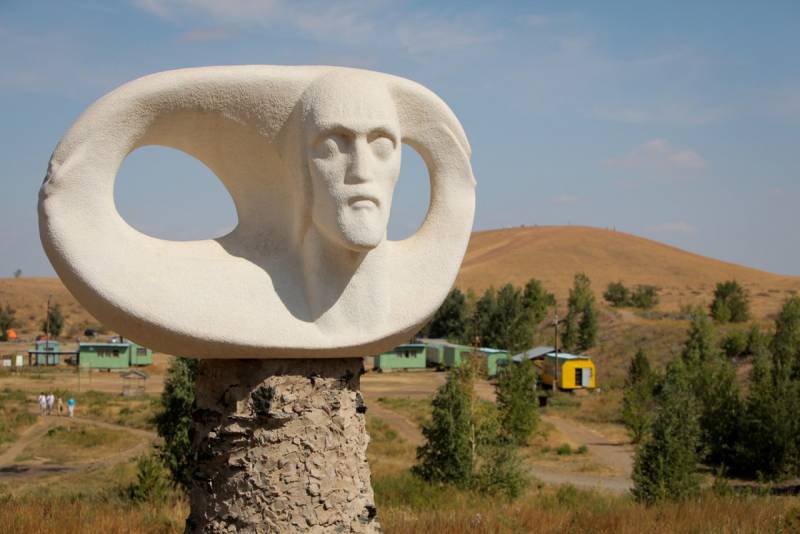 During aerial photography, which was carried out in 1956, already far from us, clear circles of clearly not natural origin were discovered in the Chelyabinsk region. They were located in the steppe on the territory of the Bredinsky region - at the confluence of the Utyaganka and Karaganka rivers. 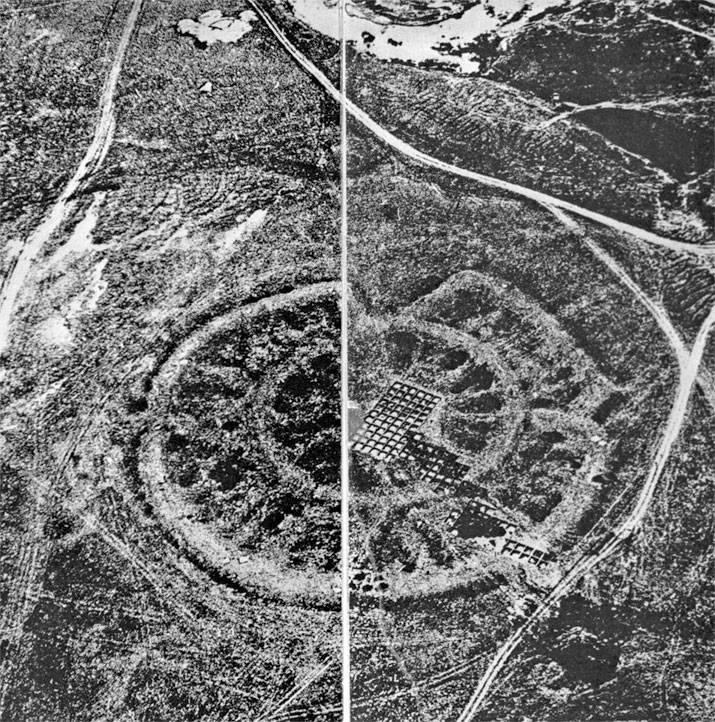 Arkaim, aerial photography
Immediately, thoughts arose that the remains of some ancient structure might have been found. But the time was difficult, the country was only recovering from the post-war devastation, and no one expected any special sensations from the research. Therefore, this find did not arouse much interest then. The circles were mapped and were not remembered until the summer of 1987, when an archaeological expedition headed by S. G. Botalov and V. S. Mosin was sent to the Ural steppe.

Two Chelyabinsk schoolchildren, A. Voronkov and A. Yezril, were among the adult archaeologists at that time. It was they who, having climbed one of the hills, were the first to see with their own eyes the mysterious circles of Arkaim in the indicated square. Botalov and Mosin reported their discovery to the famous specialist G.B. Zdanovich, who then supervised archaeological work in the South Urals (this researcher died in November 2020).

In the course of further research, more than 20 ancient settlements, associated necropolises (the anthropological type of the buried turned out to be proto-European) and hundreds of small unfortified settlements were discovered. The time of their construction was dated to the XVIII-XVI centuries BC. e. Recall that it was to this time that the flowering of the Cretan-Mycenaean culture, as well as the construction of Stonehenge and the Egyptian pyramids of the Middle Kingdom, belong.

This newly discovered civilization received the code name "Country of Cities". Its territory covers the south of the Chelyabinsk region, the southeast of Bashkortostan, the east of the Orenburg region and the north of Kazakhstan. It stretches along the eastern slopes of the Ural Mountains for 400 km from north to south and 200 km from west to east. The first opened and largest city, apparently, was the capital of this state. This city received its beautiful and unusual-sounding name Arkaim (from the Turkic - arch, ridge) from a hill and a natural boundary located not far from the excavation site. It is believed that it was located on the site of an extinct volcano. 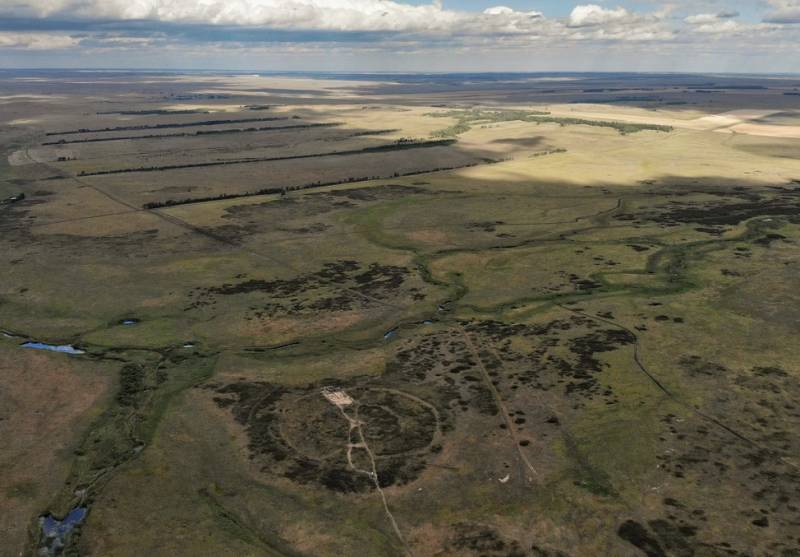 Arkaim, top view
It turned out that the settlement is one-layer, that is, neither earlier nor in later times there were no settlements on this place.

At the end of the 80s, most of the territory of the "Country of cities" almost ended up in the flooding zone of the Bolshe-Karagan reservoir, which was being built nearby, but the local branch of the Academy of Sciences managed to defend it. At that time the director of the Hermitage B. Piotrovsky joined the "struggle for Arkaim".

Reports about Arkaim aroused great interest among foreign archaeologists as well: groups of researchers from the USA, the Netherlands, Germany, and Ukraine worked on the territory of the "Country of cities". The main work on the study of the "Country of cities" took place in 1991-1995. In 1992, Arkaim was declared a protected area and included in the Ilmensky reserve. The historical and cultural center "Arkaim" was also created, which began to actively work to attract tourists. In 2005, Arkaim was visited by V. Putin and D. Medvedev, who were guided by G. Zdanovich himself.

At the end of the twentieth century, Arkaim became quite widely known in the circles of Russian mystics and esotericists. In the media and in pseudo-scientific circles, Arkaim began to be called "the most mysterious archaeological site in Russia", the Ural Troy and Russian Stonehenge. Some authors even considered it to be the spiritual center of ancient Siberia and the Urals described in legends. Others argued that Arkaim and "Country of Cities" are proof of the antiquity of the Russian stories, the countdown of which, it turns out, should be conducted from the XNUMXth century BC. e.

However, it has been proven that the settlements of the "Country of cities" have nothing to do with the peoples inhabiting modern Russia. According to the most popular and widely disseminated version, they were founded by proto-Aryan tribes who, on the way of their migration from north to south, lingered in the Ural steppes for two or three centuries. Here they built their cities, which they themselves mercilessly burned and destroyed.

However, a more reasonable hypothesis is that the settlements of the "Country of cities" arose in the course of Indo-European migration from the West, which was caused by the collapse of the Circumpontic metallurgical province.

Numerous finds of archaeologists at the site of Arkaim and other cities (and these are works of art, weapon, ritual objects) prove a higher level of development of their inhabitants in comparison with the surrounding tribes. After the departure of the Arkaim people, some technologies were probably mastered in the Urals only a few centuries later. The main occupation of the population of the "Country of cities" was still cattle breeding: Arkaim and other cities performed defensive and commercial functions, served as a place of public meetings.

The inhabitants of Arkaim knew how to make objects from bronze (numerous metallurgical furnaces were discovered), but they also achieved great success in agriculture, engineering and architecture. So, Arkaim, for example, was clearly built according to a pre-planned plan. In this city there were two rings of defensive structures inscribed one into the other and two circles adjacent to the walls of dwellings, with a central square and a circular street. The total area of ​​the settlement was 20 thousand square meters. m, the diameter of the inner citadel is 85 m, the diameter of the outer (wooden) walls is 143-145 m, the thickness of the walls at the base is 3-5 m, and the height of the embankment in place of the walls was 3-3,5 m earlier and even now reaches 1 meter. Ground bricks were used as building material for the houses. 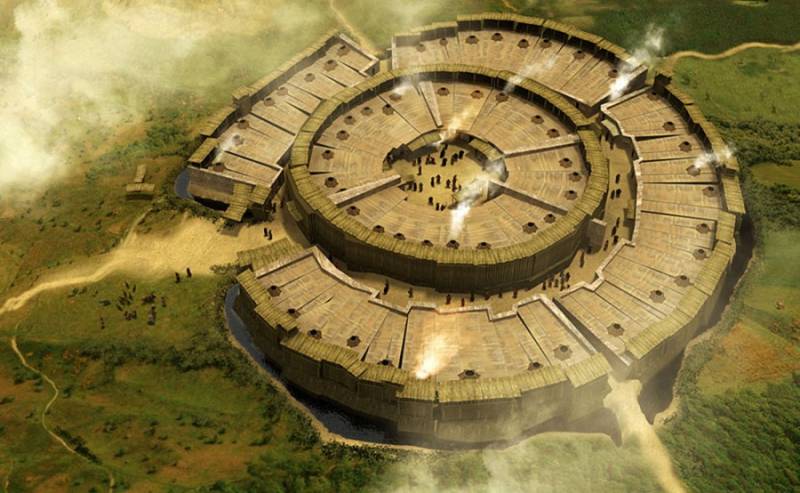 Proposed layout of the city of Arkaim
It is interesting that the houses were multi-storey, with 10-30 "apartments" in each (the wall of one house was the wall of another), and all the underground structures of the city were connected with each other. There were 67 houses in total (40 in the outer circle and 27 in the inner circle). The city street had wooden flooring and storm sewers. It is said that the ring structure of the city is oriented by the stars and made it possible to track 18 astronomical events, including the rising and setting of the Sun on the days of the equinox, the rising and setting of the high and low moon. However, it must be borne in mind that the picture of the starry sky has changed quite a lot over 4000 years.

There are supporters of the version that Arkaim is a model of the Universe. Others consider it to be the projection of the sky map onto the earth. Serious researchers agree only that the fortress is approximately oriented to the cardinal points.

Arkaim had 4 entrances, oriented to the cardinal points, some of them were false. The area inscribed in the circle of the walls was square.

Thus, schematically, the city represented the ancient figure of the mandala: the square, apparently, symbolized the earth, the circle - the sky or the universe. Starting from the almost ideal circular structure of Arkaim, some researchers identify it with the astrologically verified city described in the ancient Indian treatise Arthashastra. But in this matter, of course, you should be very careful. In addition, it cannot be ruled out that other cities of the Aryans (if they were precisely the Aryans) were built on a similar principle. In addition, many scholars consider the description of the city in Arthashastra to be conditional and symbolic.

Archaeological finds allow us to conclude that the inhabitants of the "Country of cities" loved cherry-colored clothes, were fire worshipers, they did not know the script.

Why did the residents of Arkaim and other cities leave their homes?

No traces of the invasion of neighboring tribes into their territory were found, and the level of development of the newcomers was clearly higher than the owners. Some scientists suggest that they had to leave because of changes in climatic conditions. The advance of the glacier forced the Arkaim people to migrate to the south.

However, some researchers argue that a kind of ecological catastrophe took place in the "Country of Cities". Simply put, the aliens so polluted and littered their cities and the surrounding area that it was easier for them to burn everything and leave.

One way or another, some researchers believe that the find of Arkaim can confirm the legends about the settlement of the Aryan tribes, which say that they once came to the territory of Persia and India from the north. Others go even further, talking about aliens from the legendary sunken mainland, which in the Avesta (the holy book of Zoroastrianism) is known as Khairat. According to the Avestan tradition, the prophet Zarathushtra was born somewhere in the Urals. Information from other ancient texts suggests that on their way the Aryans stopped on the Volga, the Urals and Western Siberia.

Currently, there are a tourist center, a hotel and several museums near Arkaim. The settlement is open for tourists from May 1 to September 30.

It is very difficult to get there on your own, since Arkaim is far from big cities: it takes 2 hours to drive from Magnitogorsk, 6 hours from Chelyabinsk, and even more from Yekaterinburg. We have to make transfers and walk the last few kilometers.

On the spot, you can book an excursion or take part in some master class (for example, on making ritual dolls). Or even explore the surroundings on a hang glider. However, the tourist offices of the surrounding large cities are now organizing weekend bus trips.

The historical and cultural center "Arkaim" includes not only the settlement, but also the surrounding territory, including the surrounding hills, each of which was given a "suitable" name. For example, Cherkassinskaya Sopka is now called the "Mountain of Reason". The former Steep Mountain has become the "Mountain of Happiness" (as well as "health"). "Mountain of Love", it is - "Mountain of the Heart", was formerly known as Grachinaya Sopka. Now here they tie ribbons to stones and bush branches and bury notes with wishes for “great and pure love” (and “who doesn't want it?”). There is the "Mountain of Repentance", it is also - Arkaim (Bald) and "Mountain of Seven Seals" (Curly), the mountain of "Revelation". Mount Shamanka is promoted as a "place of fulfillment of desires and purification." A stone labyrinth "Spiral of life" was built on this mountain in the 90s. 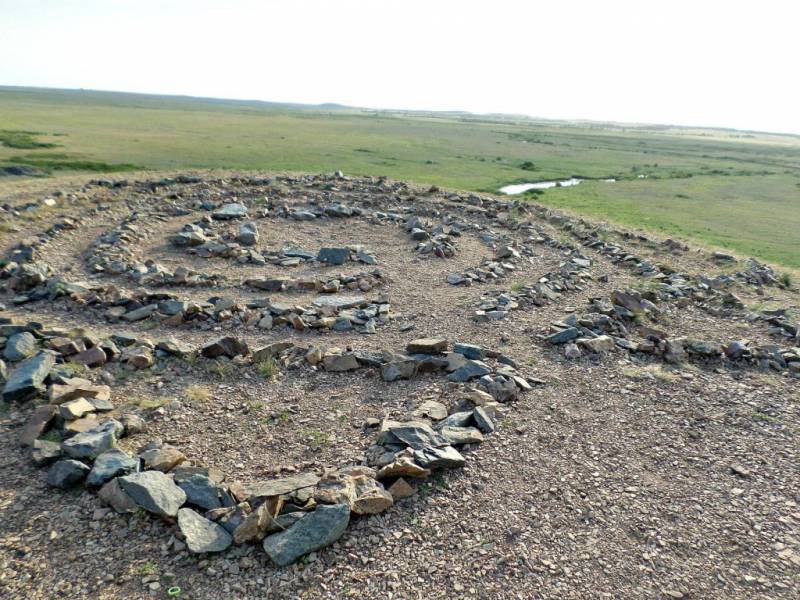 Smaller spirals are found on the tops of other mountains. And tourists independently lay out small pyramids, pentagrams, squares and spirals from stones.

Shamanka, "Mountain of Repentance" and "Mountain of Love" are located closest to the tourist camp. The latter is the highest (about 350 meters). So these are, rather, still hills.

There is a museum "Dwellings of the Stone Age", a museum of nature and man of the southern Urals, an ethnographic museum "House and estate of the Orenburg Cossack", a windmill, an alley of menhirs, several barrows. 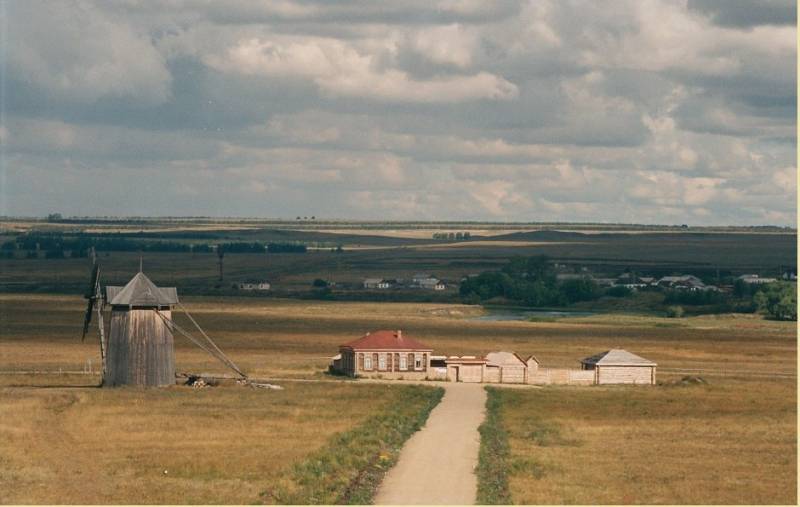 House and estate of the Orenburg Cossack, mill. Brought from the village of Varlamova, built in the late XNUMXth - early XNUMXth centuries. 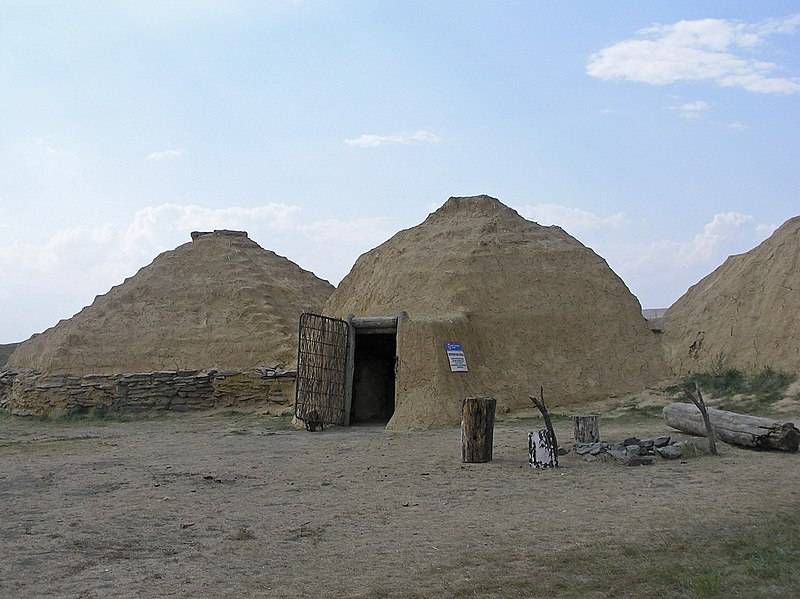 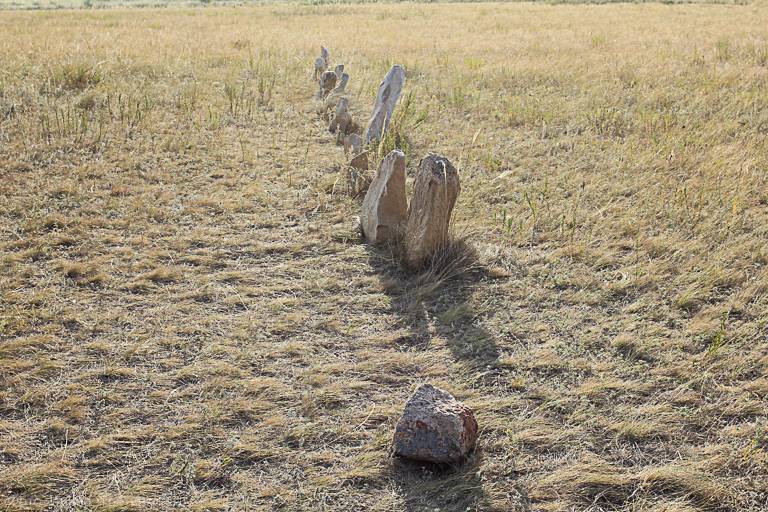 Menhirs Alley, Arkaim
There is a fairly large exposition of Arkaim finds in the Chelyabinsk Museum of Local Lore. There you can also see anthropological reconstructions of a 23-year-old man and a 25-year-old woman, whose burial was found in the Bolshekaragan mound "Country of cities". 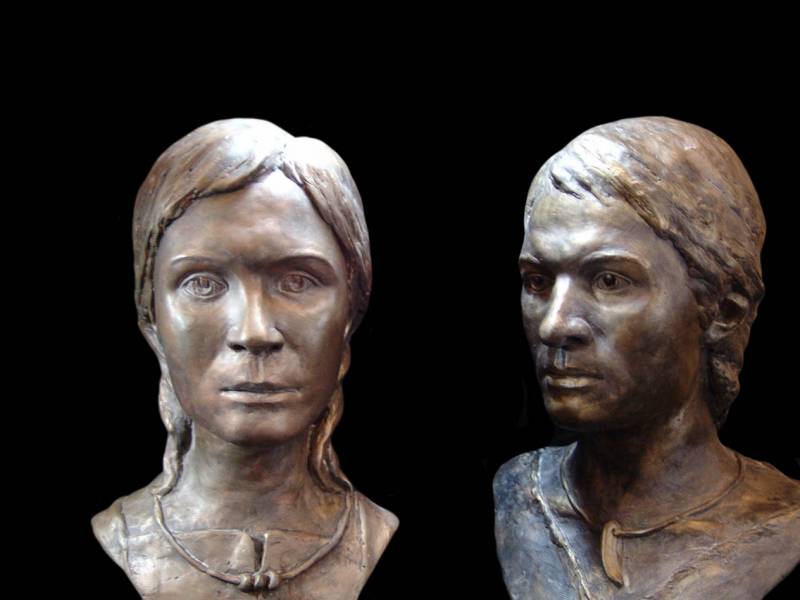