"The Russians place missiles on every meter of their ships": Britain compared the Type 26 frigate with the Buyan-M MRK in terms of armament 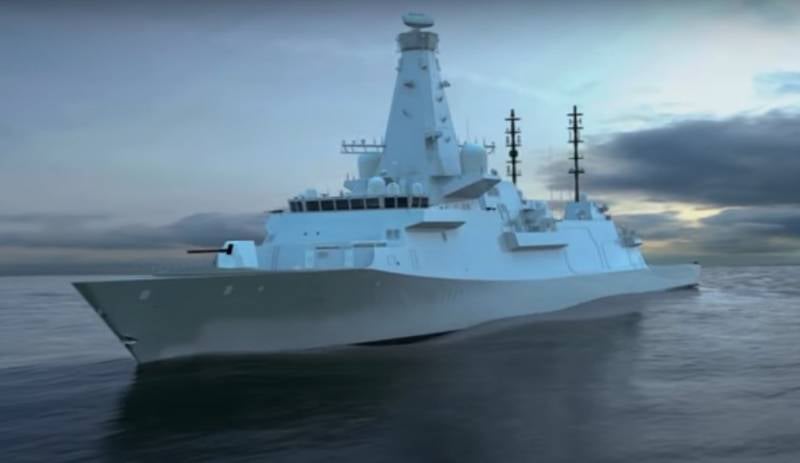 This week in the British House of Commons it was announced that "initially the Type 26 frigate will only be equipped with a helicopter and a short-range missile system (plus a medium-caliber cannon and Phalanx CIWS)." The announcement caused a strong reaction in the British press; observers came out with sharp criticism, being dissatisfied with the extremely weak armament of the new escort ships of the AUG.

Loses even to Buyan-M

Critics include Tom Sharp, a retired commander [Captain 2nd Rank] who has been in the seas for 20 years. He compared armory stuffing of British ships, including the Type 26, with similar warships in fleets other countries.

In the table presented by him, ships from different countries are grouped. It evaluates the existing and new projects of the Royal Navy (RN) in comparison with the fleets of the United States, France, Canada, the Netherlands, Australia, China and Russia. The nine major weapon systems are listed at the top. Depending on their availability ("yes / no"), the ships gain points. As a result, the average value for the country is displayed.

The average score for all fleets is 6 out of 9. The US Navy is in the lead with 7,25, followed by the Chinese PLAN with 7 points and the Dutch frigate De Zeven Provinciën with 7 points. The average for the Royal Navy and T26 in particular is 4: "lower than on any other ship and in any other country," the author writes. Even the Russian MRK Buyan-M scored more points.

Fighting is a bloody affair. The ability to both withstand defense and attack is critical and highly dependent on the "mass". To use a boxing analogy: if you are half the size of your opponent, you will be beaten
- the commander believes. 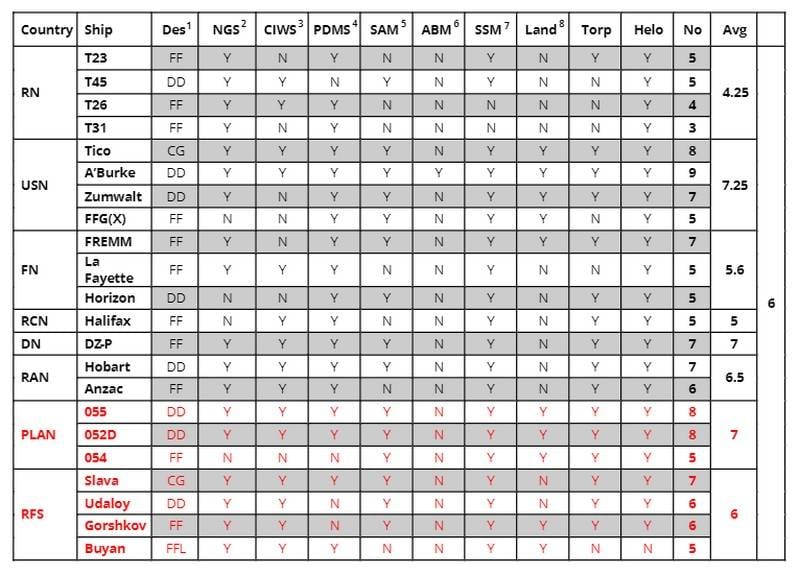 He tried to understand the reasons that affected the weak armament of the new frigate:

Of the ships listed in the table, excluding RN, 15 out of 18 have any torpedo launch systems. It also begs the question why the T26 (and T31) are the only ships on the list without surface-to-surface missiles?

First, there is not enough money, although recently the defense budget was significantly increased [the World Bank was in 4th place in terms of expenditures, the Russian Federation - in 5th]. Secondly, it has already become a habit to start building new types of ships, despite the immaturity of technology.

The Russians place missiles and guns on every meter of their ships, so much so that they literally bristle with them, and our fleet seems to be taking the opposite step.
Sharpe points out.

This is due to the unavailability of technical solutions. For example, officials claim that work on the Type 45 missile defense is ongoing, “but why was it not completed when the system was put into operation?” The author asks.

Thirdly, a mentality has formed according to which pennants, devoid of a certain type of weapon, will be covered by ships that possess them.

However, show up [on the battlefield] with a low-quality set [of weapons] and you will be sent to Group B, patrolling the waters a couple of hundred miles away.
Sharpe points out.

Fourthly, during the procurement process, costs are constantly growing, and therefore a dilemma arises - either completely abandon the program, or sacrifice its component parts.

I know that every military industrial complex in the world suffers from this, but maybe ours is in the ranks of the worst?
- writes the commander, pointing out, for example, that British ships have a Mark 41 launcher for anti-ship missiles and torpedo tubes, but they are empty, since no ammunition has been purchased for them.

Calling the Type 26 project a "failure", the author was concerned about the possible fate of the promising British destroyer Type 83:

The "8" index suggests that these ships will be large enough to match the cruisers of the past [...] There is a danger that we will build another ship weighing a billion pounds, which is inferior in armament to the 15-year-old Russian corvette
- the commander concludes.