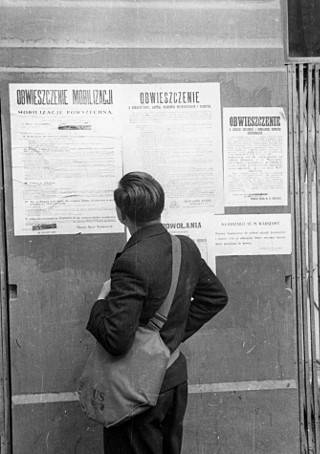 Mobilization. Young man reads an alert on the streets of Warsaw

The growing threat of war forced the development of a new mobilization regime - a plan "W"in force from April 30, 1938.

The new mobilization plan was based on the military-political concepts of the Second Polish-Lithuanian Commonwealth, based on the theory of two enemies. It was distinguished by its unity and flexibility in the event of a war either with the USSR or with Germany.

Its mobility was based on the possibility of making a number of changes to it as the military-political situation changed. With the possibility of carrying out either emergency (secret) mobilization through the system of individual conscription of the next contingents, or general (explicit) by means of an appropriate official notification of the population. Covert mobilization could be carried out either throughout the country or in some regions, depending on the direction and level of the military threat.

Thus, it was possible to change the scope of mobilization by defining its territorial coverage or the categories of reservists who needed to be attracted to perform certain tasks.

For this, a system of differentiated mobilization agendas was introduced:

General mobilization additionally affected 7 infantry divisions (including 3 reserve). In the course of mobilization, emergency and general, the state police, the border guard and the Border Guard Corps were supposed to bring the states to the military schedule. The Ministry of Railways and the Ministry of Posts and Telegraphs were to form their own technical, construction and repair units according to military standards.

The mobilization of the people's defense battalions was to be carried out according to a slightly different scheme - the so-called "gatherings", which, according to circumstances, could be announced for each battalion separately.

In May 1939, amendments to the plan were implemented "W" - the so-called mobilization plan "W2".

It includes all the changes and additions that were not taken into account in the plan. "W" and pointed out by the headquarters responsible for the mobilization. So, according to the plan "W2", the number of divisions subject to emergency mobilization was increased by two reserve ones, the formation of two additional infantry divisions and the reorganization of the 10th Panzer Motorized Brigade (it was named Warsaw) began.

In addition, plans were developed to mobilize units directly subordinate to the Ministry of Military Affairs - fortress battalions and companies, air defense divisions, heavy artillery divisions, etc., as well as the system of mobilizing the national defense.

Finally, according to plan "W2", the mobilized army was supposed to number 1500000 troops in line, marching and militia units and formations.

In connection with the German occupation of the Czech Republic and Moravia, on March 23, 1939, the first, partial, emergency mobilization under the "red" and "yellow" summons was initiated in military districts IV (Lodz) and IX (Brest). This mobilization brought four infantry divisions, one cavalry brigade and auxiliary units to alert.

In addition, the personnel of the border and coastal units was increased, and some of the reservists were called up for unscheduled exercises. On August 13, in Military District II (Lublin), an emergency mobilization of reservists with "green", "red" and "black" subpoenas was launched, which brought two infantry divisions, one cavalry brigade and auxiliary units to alert.

Only on August 29 was a general mobilization announced, which, however, had to be interrupted under the onslaught of France and Great Britain. England and France were ready to make concessions at the expense of Poland and tried to bargain with Germany on acceptable terms.

Instead, they received a list of 16 demands, which Germany put forward in an ultimatum tone towards Poland. In Warsaw, they learned about them at night from 30 to 31 August. And in response, in the morning, the Polish government resumed general mobilization.

Fascist German forces invaded Poland on the morning of September 1, 1939.

All formations mobilized in an emergency manner were already on alert, but not all of them managed to reach the deployment areas in defensive positions.

For the rest of the mass of troops, it was the second day of general mobilization, which was already being carried out under enemy fire and bombs and in conditions of disrupted communications.

By September 1, the Poles managed to put on alert and deploy the following forces on the defensive lines: