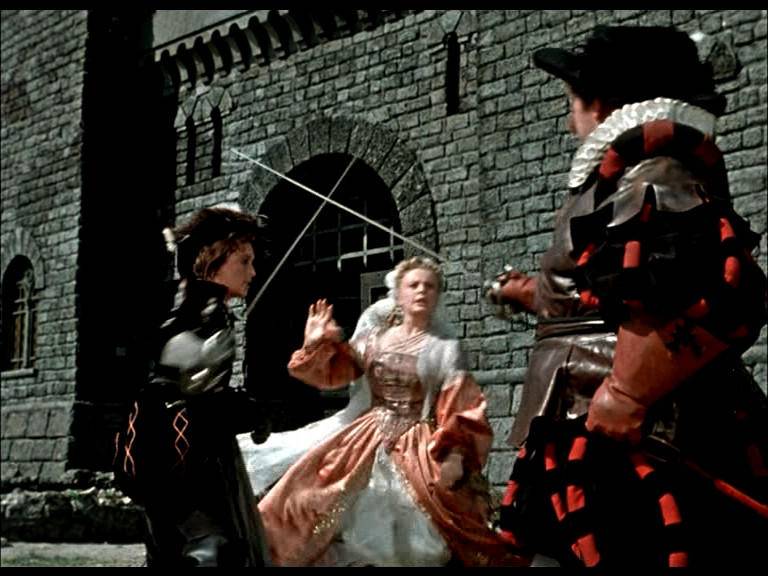 What is so good about the Soviet film "Twelfth Night" of 1955 is that, in addition to the excellent acting, you can still see equally beautiful costumes there, and weapon the era of Shakespeare and Tudor England

"Having turned the property into armor
And on myself carrying my legacy "
(William Shakespeare "King John")
Museum collections of knightly armor and weapons. In the previous article devoted to the English armor of the Tudor era, we began to consider the armor of Henry VIII, and it was expressed the wishes that the story about them would be continued in order to, if possible, cover all his armor that has come down to our time. And gradually all this will be fulfilled.

Well, today, the collection of the Metropolitan Museum in New York will help us get acquainted with the armor and swords of the era of the same Henry VIII. 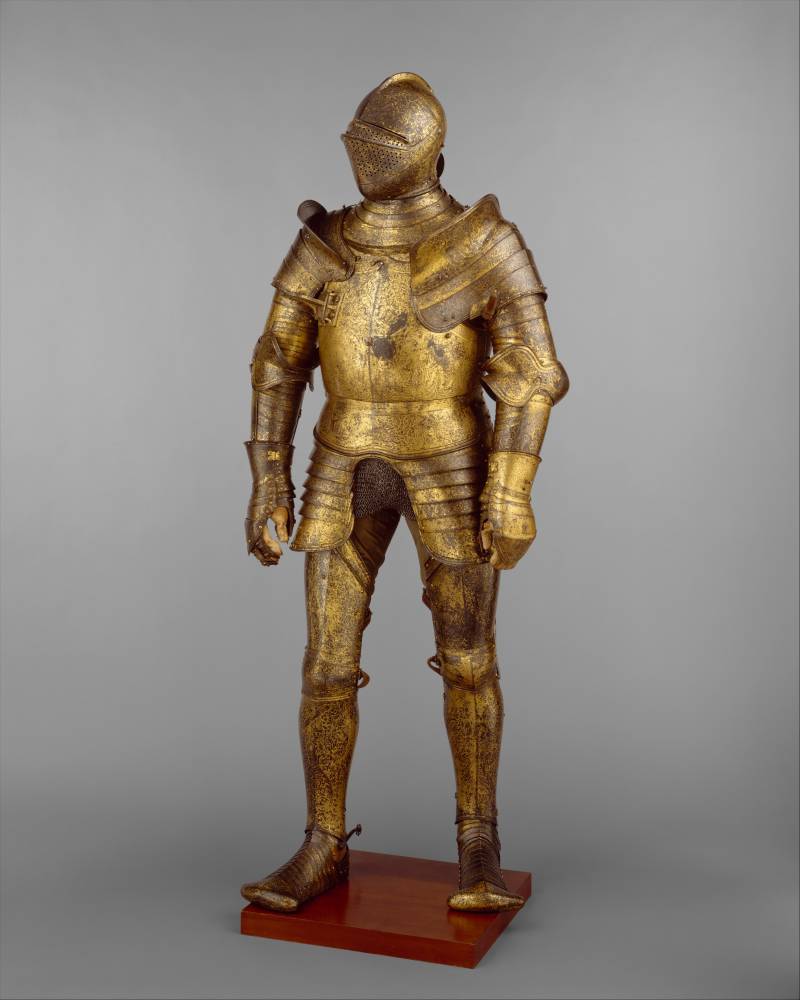 Luxurious gilded armor, probably belonging to King Henry VIII of England (1509-1547). Dated to 1527. This is the earliest dated armor from the royal workshops in Greenwich, which was founded in 1515 by Henry VIII to produce armor for himself and his court. It is also the earliest Greenwich set, an armor made of a number of interchangeable elements with which it could be adapted for use in combat and in various tournaments. In addition, the overall engraving and gilding make it one of the most ornate pieces of armor in Greenwich. The author of the decor is the Swiss artist of German origin Hans Holbein the Younger (1497-1543), who worked at the English court from 1526 to 1528. Metropolitan Museum of Art, New York 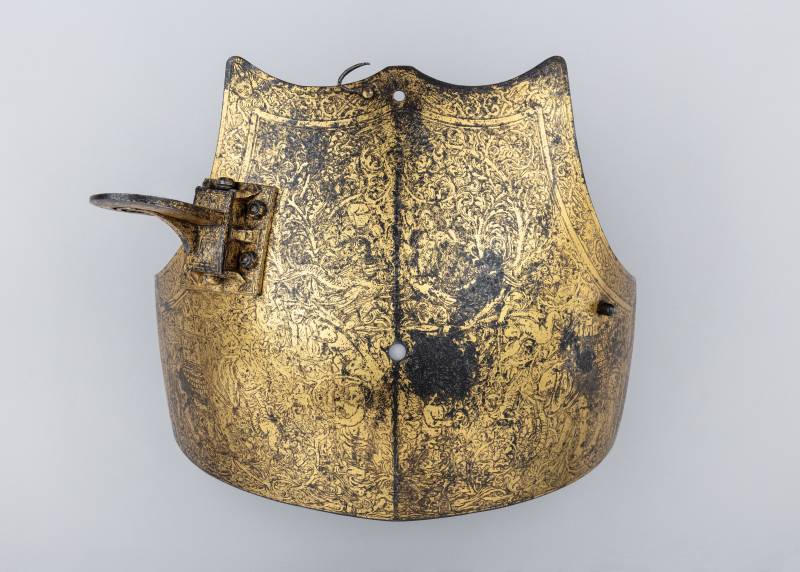 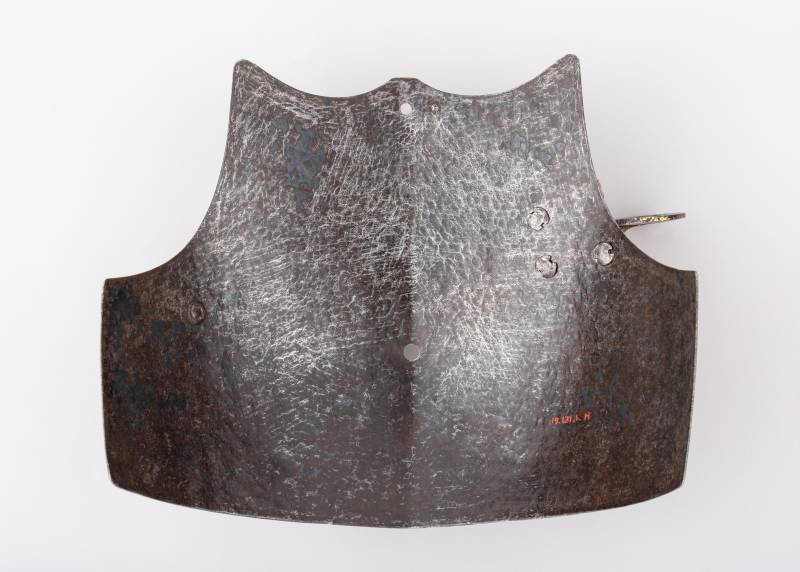 Inside view of the bib 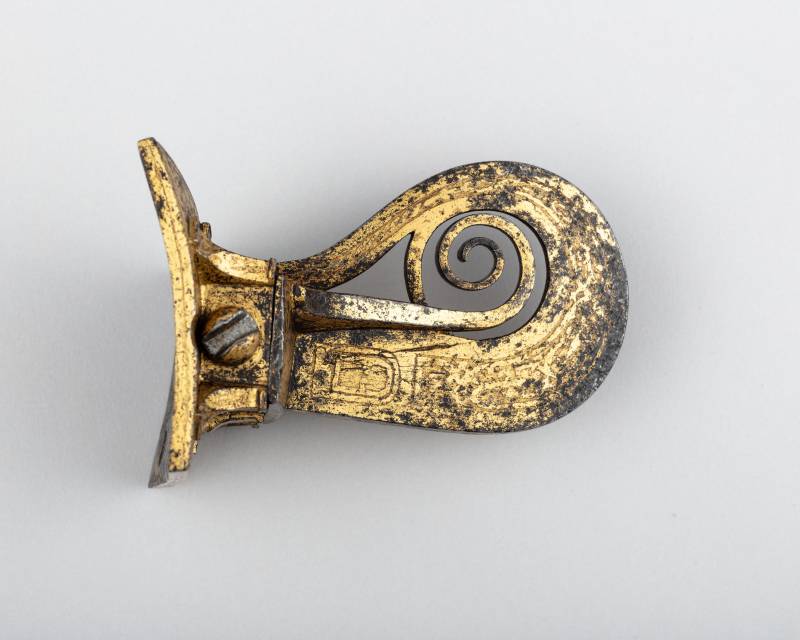 Lance hook separately
But today, first of all, we will pay attention to the weapons of that period, which, like armor, also makes sense to talk about.

Let's start with the sword, since it still remained perhaps the most highly esteemed weapon of the people of the noble class. At the beginning of the XNUMXth century, he still had a long and powerful blade with a sharp point, designed for stabbing blows, but at the same time his width (like sharpening) was enough to hack down his opponent. As before, the hilt of the sword was a cross, with a wooden hilt wrapped in cloth or leather, usually wrapped in a cord or wire.

Sword 1600-1625 with the blade of the master Clemens Horn. It is an excellent example of a fashionable sword worn by noblemen in England during the time of King James I. The silver grips on the hilt were made by an unknown London master and are masterpieces of miniature relief sculpture. The richly engraved and gilded blade was signed by Clemens Horn, a renowned craftsman from Solingen, Germany. Dimensions: length - 99,7 cm; blade length - 76,8 cm; crosshair width - 22,2 cm; weight - 1093 g 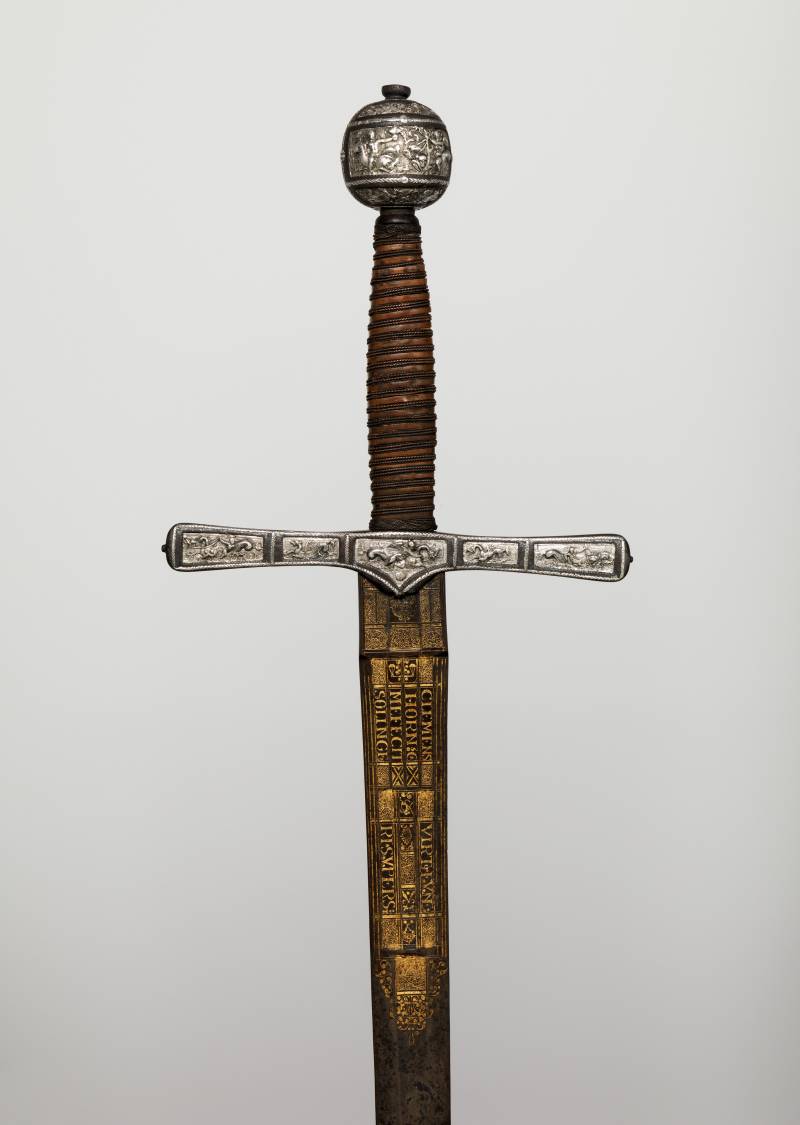 Close up of his hilt

The pommel of the handle has traditionally served as a counterweight to the blade. A properly balanced blade could be worked with less hand fatigue during fencing. Even at the beginning of the third quarter of the XNUMXth century, such swords were still in use. However, at the same time, rings began to appear on some infantry swords to protect the fingers falling on the ricasso - the blunt part of the blade behind the crosshair. But by the middle of the century, rings appeared on the blade itself, and side rings on the crosshair, which provided increased protection for the fighter's hand in battle. And at the same time, rapiers appear. Moreover, they were often longer and heavier than swords! 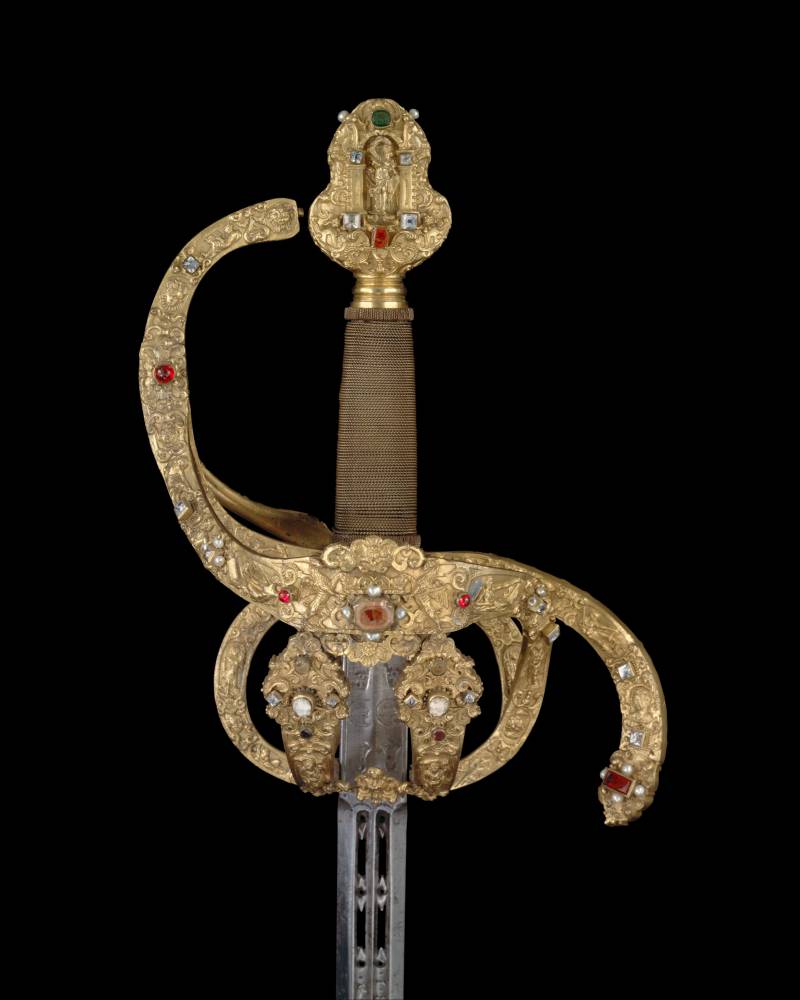 Rapier of Elector Christian II of Saxony (1583-1611), circa 1606 The handle is the only recorded work of the Dresden master Israel Schuech. This is one of the finest examples of such weapon hilts for which the Saxon court was famous. Dimensions: length - 121,9 cm; blade length - 104,8 cm; crosshair width - 17,2 cm; weight - 1474 g
The "estoc" sword was also spread in England at this time, where it was simply called "so". His blade could have three or even four edges without sharpening, but the edge was like a bayonet. They could act with two hands, passing the blade through the left, clenched into a fist. With a glove, of course ... Ordinary soldiers could have a sword and a "buckler" - a small round shield. 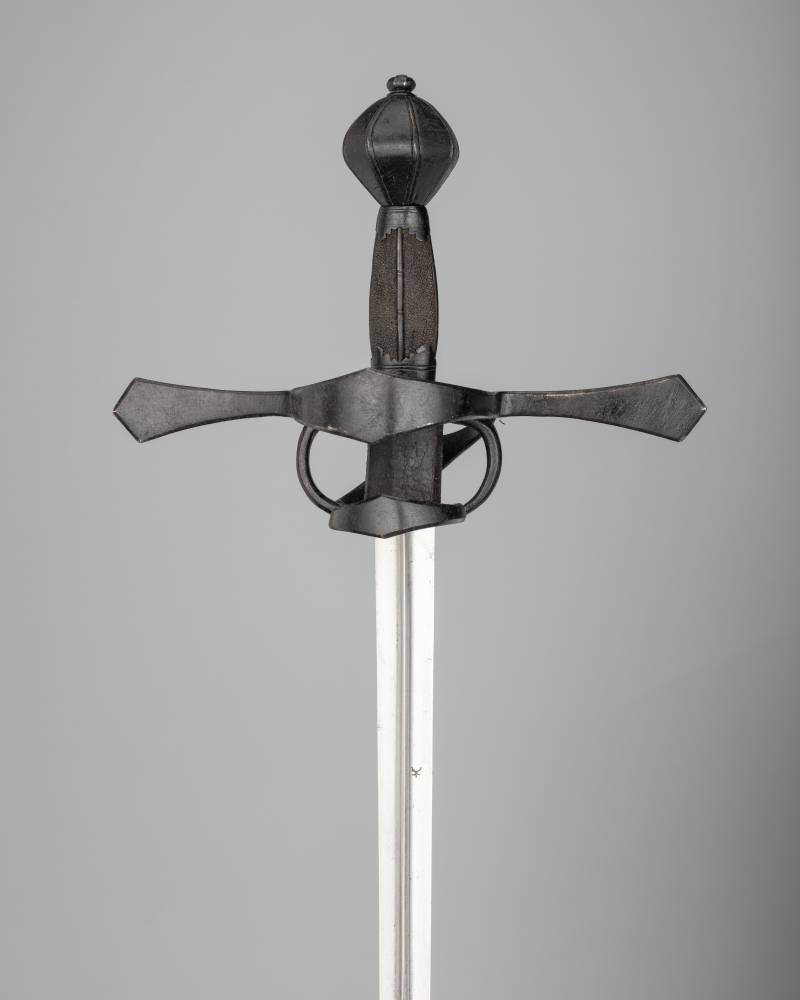 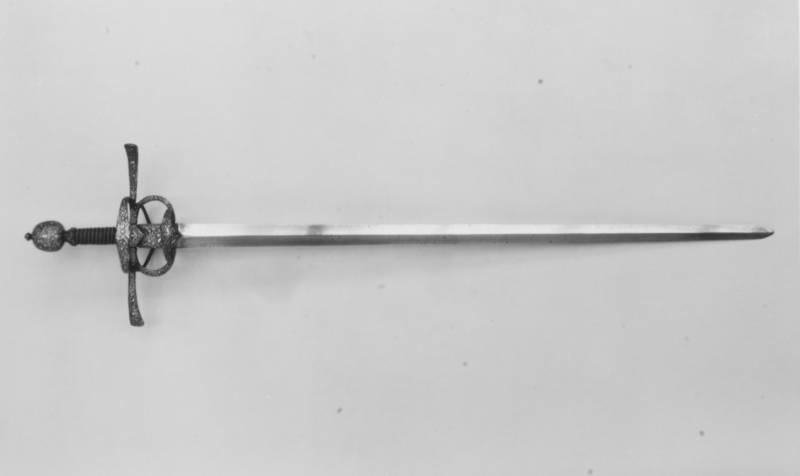 Rapier from Germany at the beginning of the 117,6th century. Length - 101,3 cm; blade length - 28,9 cm; crosshair width - 1616 cm; weight - XNUMX g
High quality blades usually came to England from Toledo in Spain, from northern Italy and from Germany - Passau and Solingen. Interestingly, the marks on the blades do little to say how widespread their counterfeiting was. The belt on the hips, characteristic of knightly effigies of 1400, was replaced 100 years later by a sling. Sometimes a ribbon or cord was threaded through a hole in the head of the hilt, or more traditionally wrapped around the handle. 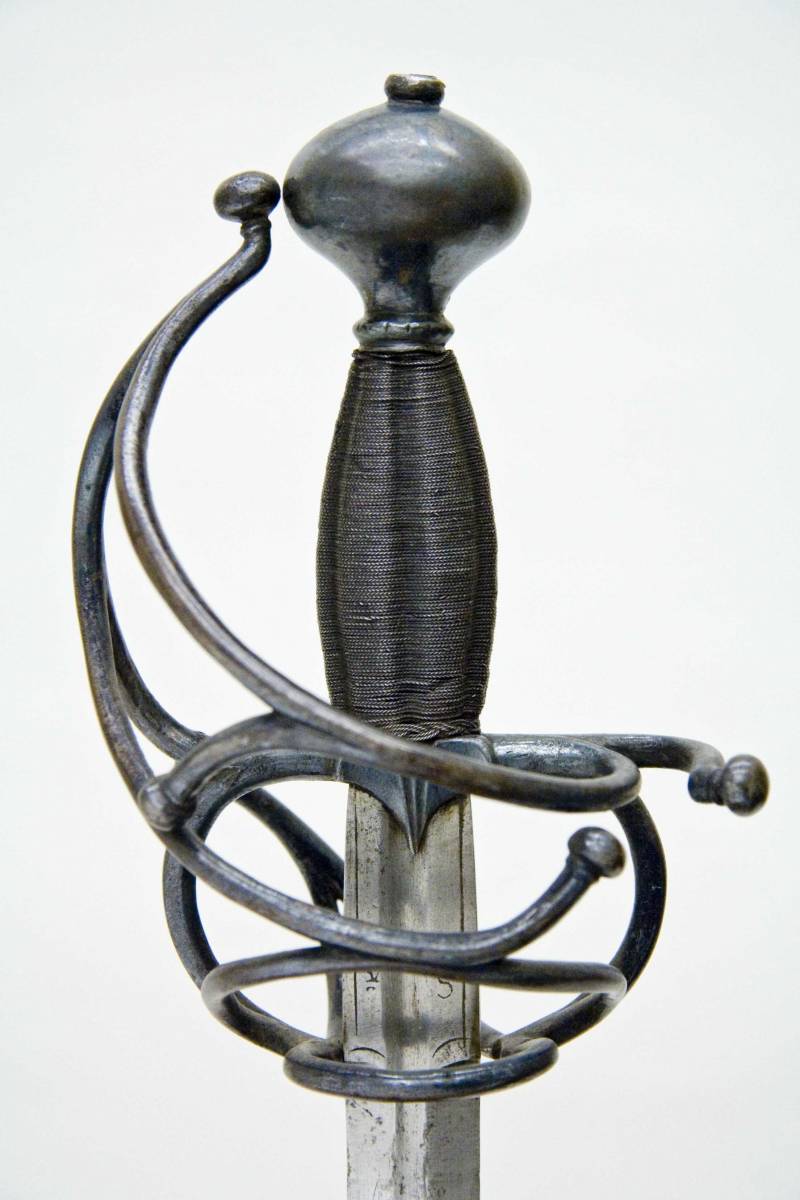 Her hilt
The scabbard was usually made of two boards, covered with leather, as well as canvas or velvet. Often the customer of the scabbard demanded to arrange them in such a way that the color and finish would match his clothes, therefore sometimes several scabbards were ordered for one sword. The edging of the scabbard tip strengthened it and did not allow it to wear out, but the metal mouth was quite rare. 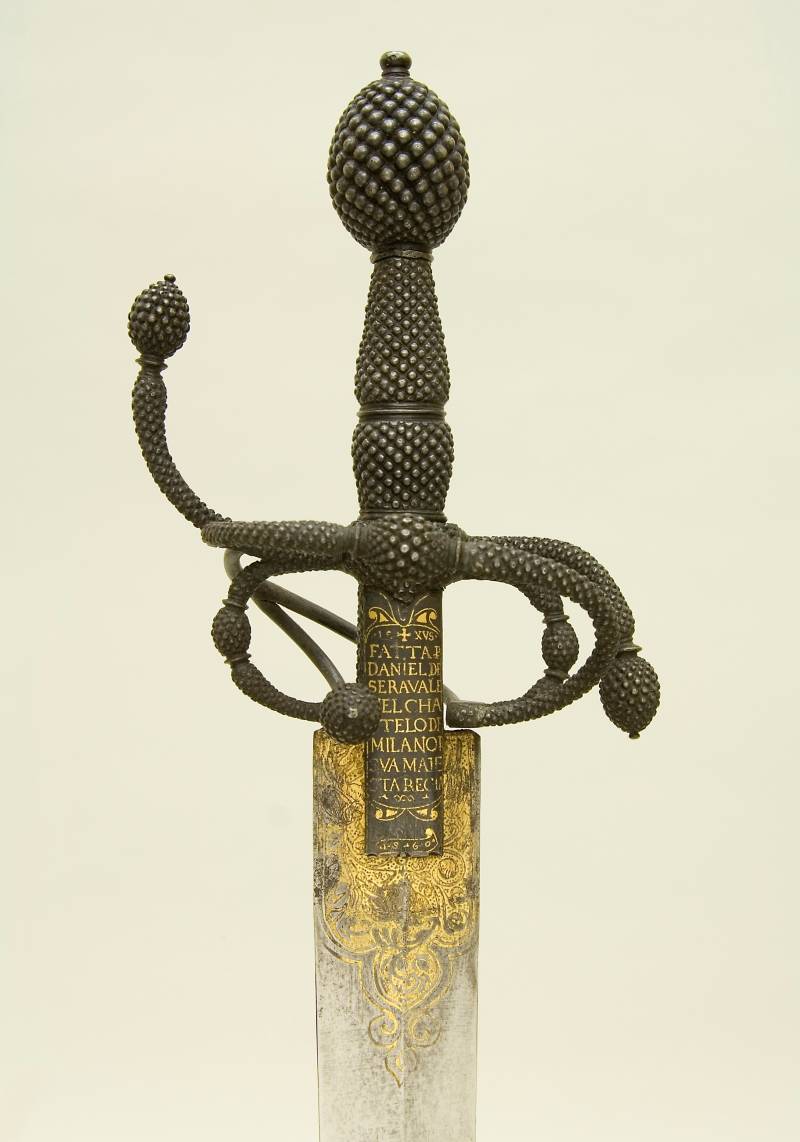 Rapier by master Daniel da Serravalle from Milan. Date: 1560 Materials: steel, iron, gold. Length - 87,6 cm; blade length - 68,9 cm; crosshair width - 15,2 cm; weight - 1304,1 g
The scabbard on the side of the mouth was often made so that the tree in front and behind was tightly entered between the projections of the guard, arranged over the "ricasso". Thus, the ingress of water inside was excluded. Very complex harnesses were created for hanging the sword at the right angle so that the scabbard with the sword when walking, God forbid, did not hit their owner between the legs. 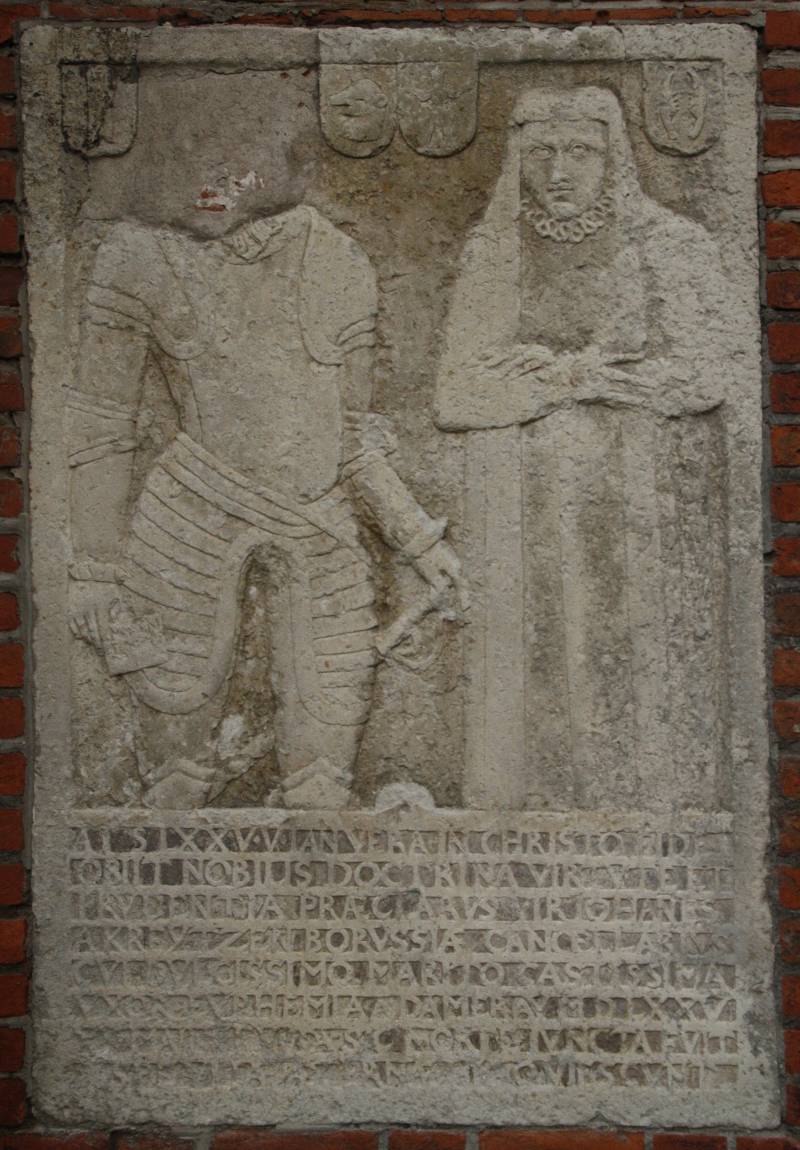 A rapier on a simple belt harness. Image from a tombstone on the wall of the Cathedral of Our Lady and St. Adalbert in Königsberg. The epitaph of Johann von Creutzen, Chancellor of Prussia, and his wife Eufemia, née Damerau, reads: “In 1575, on January 5, in the true Christian faith, the glorious husband Johann von Creutzen, Chancellor of Prussia, died in the true Christian faith, famous for his scholarship, virtue and wisdom. , as she was during her lifetime, so was united in her death on May 12, 1575, the most blameless wife Eufemia (Eufemia), née Damerau. They rest here in the hope of eternal life. With the hope of eternal life. " Photo by the author
At an early stage, harnesses were made in the medieval tradition, from three straps. Sometimes one strap ended with a "fork" that clung to the scabbard in two places. The front strap usually had an adjustment buckle. After 1550, the belt of the harness went obliquely along the "skirt" of the armor. And further, at the level of the thigh, he already supported the scabbard at the chosen angle.

In the second half of the 12th century, a special suspension appeared for at least 1575 straps with clamps wrapped around the scabbard. So the fixation of the position of the carried sword became quite rigid. Interestingly, in Europe, as well as in Japan, swords were provided with containers for a small knife and an sewn for small needs. Since 1550, they began to tie the waist with a sash over the harness so that the scabbard would not swing unnecessarily on it. In the 1560s and XNUMXs, a leather wallet on the right side, paired with a scabbard, was in fashion. That is, the idea of ​​a headset: a dagger - a sword, a scabbard - a purse, very firmly stuck in the heads of gunsmiths. And all in order to offer customers a new and, moreover, beautiful product! 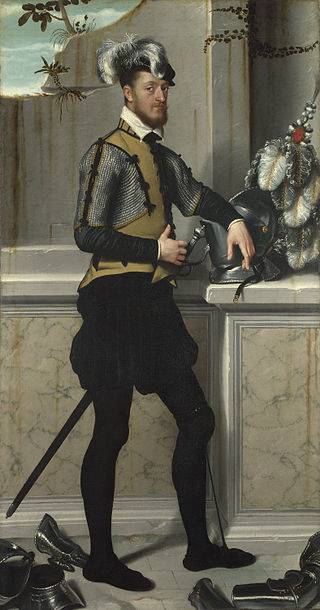 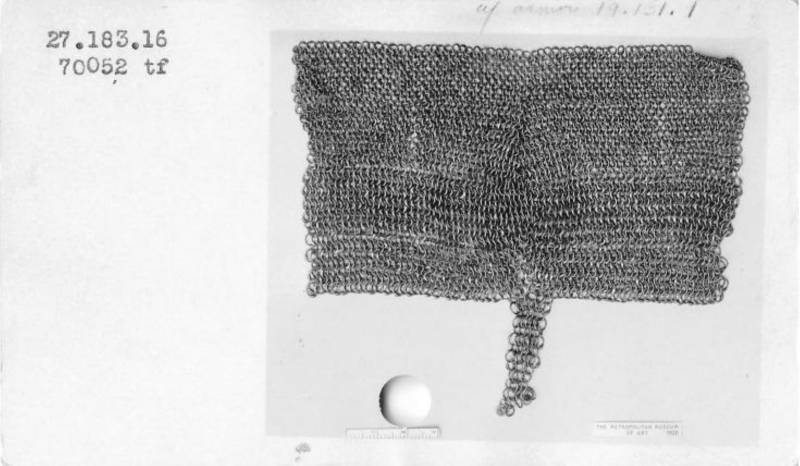 And these are chain mail "half-pants" (only on the front!) With a protrusion for the "father's inheritance" and weighing one kilogram. Metropolitan Museum of Art, New York
As for the armor, here the English gunsmiths managed to contribute to their improvement. A highly unusual and innovative feature was the abdominal plate, which was attached to the chest underneath the bib to reduce the weight placed on the shoulders. But such a plate is found only on one armor made in Greenwich in 1540 for Henry VIII. 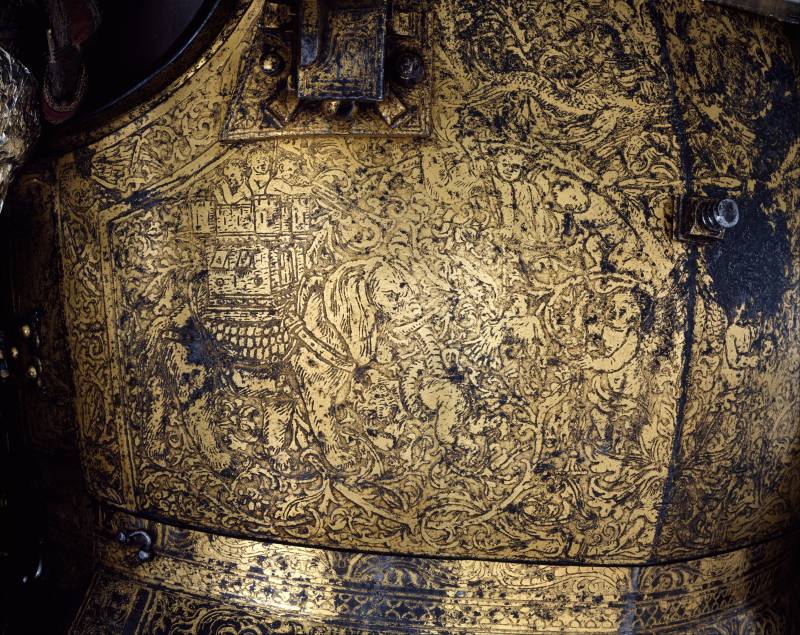 Finishing of the breastplate of the armor of Henry VIII. Made with gold amalgam by forging, that is, by heating the metal in a furnace! It is believed that this gilded armor was made for Henry VIII and then presented to them by the French ambassador François de La Tour d'Auvergne, Viscount of Turenne, who headed the diplomatic mission in London in 1527. After the viscount's death in 1532, the armor was supposedly passed on to his friend Galio de Genuillac, the great master of artillery and grand écuyer ("horse master") of France, from whose descendants he came to the Metropolitan Museum of Art. By the way, the dimensions of this armor are not at all small: height - 185,4 cm; weight - 28,45 kg 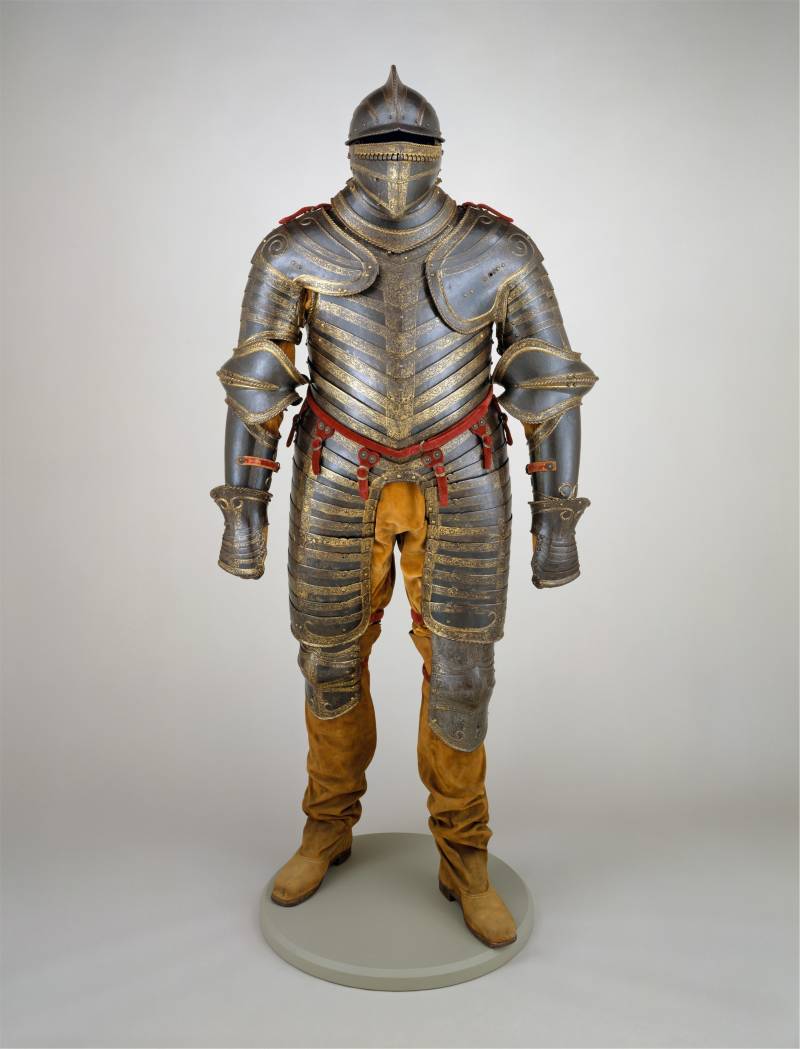 This impressive piece of armor was made towards the end of his life, when he was overweight and suffered from gout. They were suitable for use both on horseback and on foot, and the king probably wore them during his last military campaign, the siege of Boulogne in 1544, which he personally commanded, despite his infirmities.

Initially, the cuirass was equipped with a removable reinforcing breastplate, to which a spear rest was attached, and a reinforcement for the left shoulder pad. But this armor does not have them. A pair of interchangeable bracers remain in the Royal Collection at Windsor Castle. 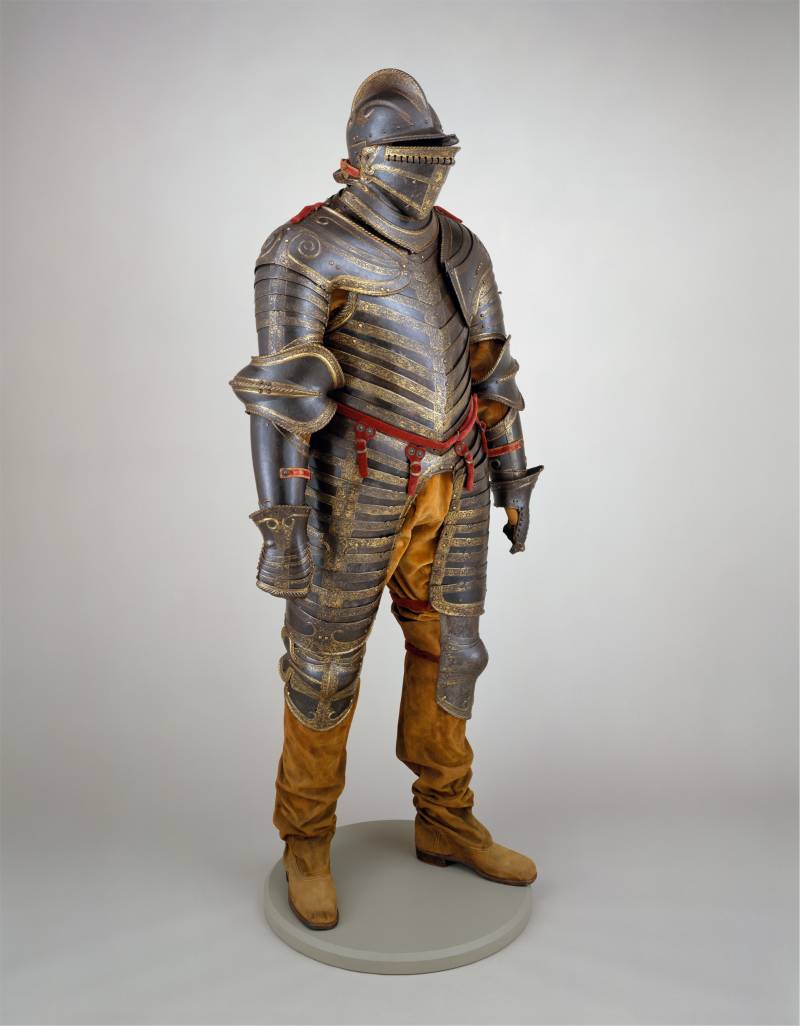 The same armor. Height - 184,2 cm; weight - 22,91 kg
This armor was recorded in the inventory of the royal possessions in 1547 as "made by the Italions." They may have been supplied by a Milanese merchant known in England as Francis Albert, who was licensed by Henry to import luxury goods, including armor, into England for sale. They were subsequently transferred to William Herbert (circa 1507–1570), the first Earl of Pembroke, Henry's squire and executor of his will. From 1558 until sold in the 1920s, they were listed as the estate of Wilton House, the residence of the Pembroke family. At the end of the 1493th century and then for quite a long time they were mistakenly believed to belong to de Montmorency (1567-XNUMX), constable of France, and their British royal origins were forgotten. 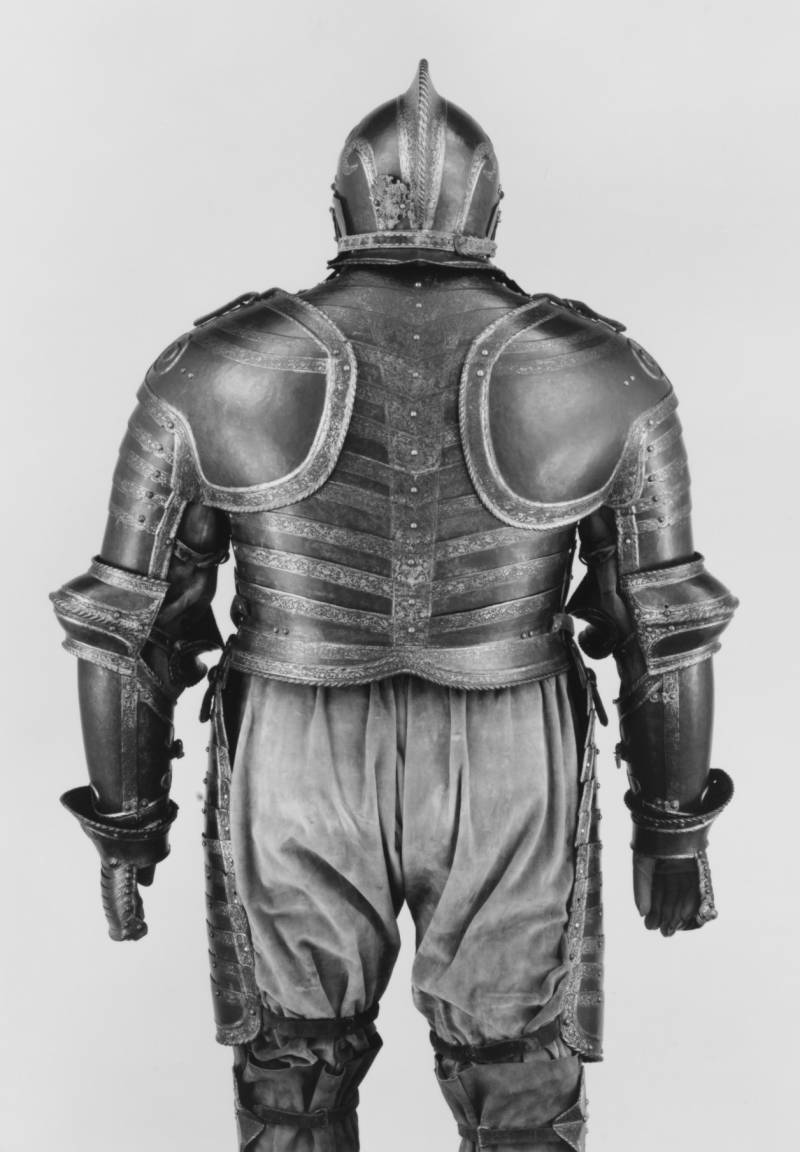 The same armor. Back view
Armor is an early example of armor, in which the bib and back are composed of horizontal overlapping plates connected by rivets and internal leather straps. The decoration, made up of foliage, putti, running dogs, Renaissance candelabra and grotesque ornamentation, is typically Italian. 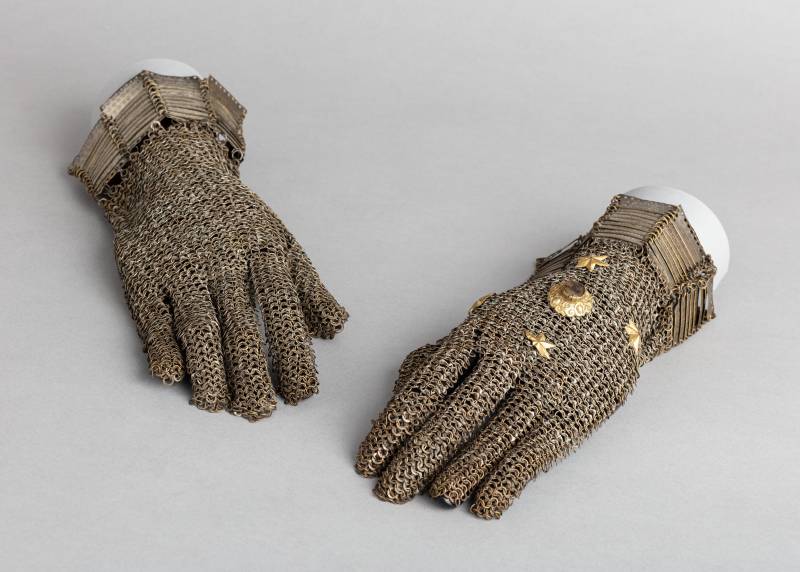 Chain gloves. XVII century. Hungary. Weight - 271/281 g. In them it was possible to grab onto someone else's blade without harm and take it back, hitting it yourself. You could just hit in the face. This was also very effective, especially if the blow was not direct, but ... sliding! Metropolitan Museum of Art, New York
To be continued ...