The helicopter market is expected to replenish 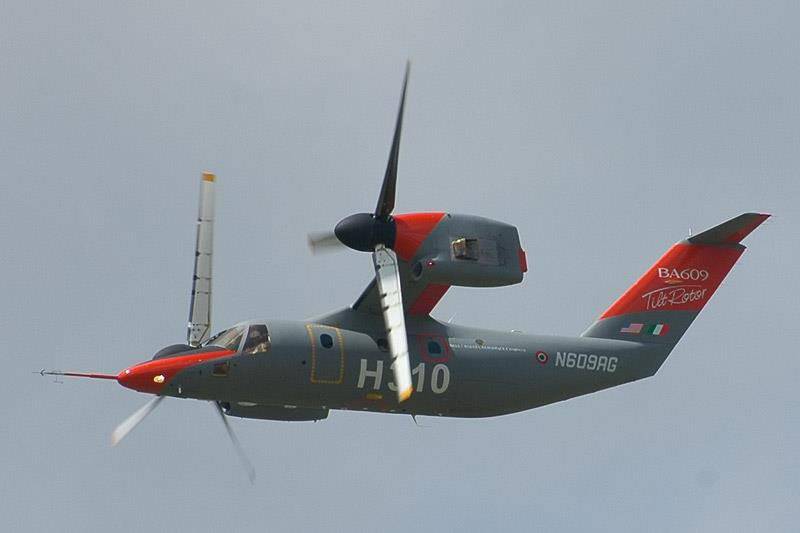 Over the past few decades, helicopters have acquired a familiar and familiar look to everyone, but in the near future, completely new helicopters must appear on the market, combining the latest technological advances. And the appearance of these helicopters will be radically different from its predecessors.


Three brand new helicopters will have to go on aviation market in the coming years, and judging by the statements of helicopter companies, they will have significant advantages over their competitors.

One of these helicopters is the BA609 convertoplane, which is a copy of the military V-22 convertiplane developed by Bell Helicopter. The process of creating an aircraft BA609 was not easy, and at one time Bell Helicopter lost hope for the successful implementation of this project by selling its share in the program of the Italian company AgustaWestland, which was a partner of Bell in the BA609 project. Italians saw in this program serious prospects and directed great efforts to further develop the convertoplan. As a result, the car received the designation AW609, and already at 2016, certification of this model is planned at the US Federal Aviation Administration (FAA).

The flight test program of the AW609 Convertoplane is one of the most advanced competitors. Two prototypes, joined by two more cars, flew a total of 650 hours during the test. The raid is greater than that of competitors, but if we consider that the AW609 project has been under development for nine years, then we can say that this is quite a modest figure. During the tests, many planned stages were achieved, in particular, it was reported that the AW609 convertiplane reached the ceiling in 7620 m, and also developed a maximum speed equal to 509 km / h. According to the management of AgustaWestland, at the moment 85% of the planned test program has been completed.

Compared to competitors, AgustaWestland's tiltrotor has a speed advantage, which will certainly find positive feedback among a certain category of customers. The AW609 cabin capacity is nine people, which makes it suitable for use only in certain offshore operations, and the large size of the convertiplane will be an obstacle to its use in medical and rescue operations.

Experts suggest that AW609 will still be able to find its niche in passenger and corporate traffic, since this convertiplane will be able to land at various airports and at the same time will not occupy slots that have become precious in Europe. A park of such converters would link London airports to regional centers such as Birmingham or Southampton, freeing up slots for international flights. Thus, the AW609 model has a certain potential, it is only necessary to find supporters of these options.

According to AgustaWestland, orders for 70 of AW609 convertiplanes from 40 of various clients are currently received. The cost of the new model has not yet been announced, and AgustaWestland will reveal it two years before the start of mass production. The estimated leadership of the helicopter company, in general, should be built around 450-500 convertiplanes AW609.

Gradually, work on the AW609 project is moving towards completion. For example, during the International Aerospace Show Farnborough International 2012, AgustaWestland signed a number of key agreements with equipment suppliers for the AW609 project. One of the agreements was signed with the Pratt & Whitney Canada engine company, which will supply the PT6C-67A turboshaft engines for the new convertible. These power plants differ from their predecessors in improved performance, and their certification is scheduled for 2015. In recent years, these engines have already been used on the prototypes of the AW609, but the power plants that will go into mass production will differ in a number of improvements.

Moreover, as the management of Pratt & Whitney Canada notes, these turboshaft engines are specially adapted for modern converters, which will have to alternate vertical and horizontal flight methods.

The second agreement was signed with the company Rockwell Collins, which will be the supplier of avionics for the new convertoplane. The AW609 model will receive avionics and displays from the Pro Line Fusion series. This equipment will be in many ways similar to the Fusion avionics series, which are already used on modern turboprop aircraft and small business jets.

Note that the new avionics was first introduced by Rockwell Collins in October last year, and differs in the use of 14-inch touchscreen displays, as well as a number of other innovations, including MultiScan weather radar and others. According to the Rockwell Collins guide, with Fusion avionics AW609 will be able to manage just one pilot, in the event that the flights will be carried out according to the rules of IFR. The cab with the new equipment will be installed on the fourth convertiplane, which should be lifted into the air in 2014 g. In this case, Fusion EDS touchscreen displays must be certified at the end of 2013 g.

The third agreement, signed with the company BAE Systems, provides for the supply of upgraded on-board computers that will be combined with a fully digital electric remote control system. New on-board computers BAE Systmes will have to be certified in 2014, it is also reported that they will install special software developed by experts of Agusta Westland, in addition, they will include an electronic digital engine management system.

Also during the air show in Farnborough, it became known that AgustaWestland will offer its customers a new version of the AW609 convertoplan with an increased take-off weight. It is noted that in order to increase the payload, it will be necessary to sacrifice slightly the ability for the vertical take-off of this convertible, but nevertheless, this version, according to the company's management, will find its customers.

AgustaWestland representatives also explained that the take-off weight of the AW609 model could be 7600 kg or 8160 kg, with the heavier version being required by companies engaged in offshore operations. To perform the take-off, such a convertoplane will need a run with a length of 11 meters. In this case, all nine seats can be occupied, and the amount of fuel on board will allow you to fly a distance of 650 km. On an oil platform located far from the coast, the tiltrotor would be able to perform a vertical landing and take-off, taking into account the reduction in weight due to the fuel consumed. In this case, the cruising speed of AW609 during the flight would be equal to 460 km / h (taking into account the 30-minute fuel reserve).

Bell Helicopters in Farnborough demonstrated its new 525R Relentless helicopter, which belongs to the super middle class of rotary-wing machines, in other words, this helicopter belongs to the upper segment of the middle class. According to Bell Helicopters representatives, this car will be in demand by such buyers who need the properties of a heavy-class helicopter with operating costs typical of middle-class cars.

It is also reported that the first flight of the model 525R should take place in 2014, followed by a tough campaign of certification and flight tests, as well as the immediate start of production and supply of new machines. This twin-engine helicopter will be equipped with a five-blade propeller and will be able to fly to a distance of 925 km.

Russian helicopter companies have also not spared the Farnborough International 2012 air show. In particular, it was there that a preliminary agreement was signed between AgustaWestland and OJSC Helicopters of Russia on the joint development, production and sale of a new single-engine helicopter with a mass of 2,5 tons. It is known that the shares of both parties in this project will be divided in equal proportions of 50 / 50. It is also reported that the new helicopter will be sold on the world market and will find wide application in various fields.

Recall that in 2010, both companies have already established a joint venture HeliVert in Russia, where AW139 helicopters are being assembled. The new project, according to statements by the management of AgustaWestland, will be another step towards the development of cooperation between the two companies. The helicopter under development should be smaller and cheaper than the existing AW119ke Koala model, and at the same time it should compete with Eurocopter EC130 T2 helicopters.

As for the company Eurocopter, the experts continue to closely monitor the development of the project X3. Recently, the X3 demonstrator completed his six-week US tour, and in September he will have to attend the ILA air show in Berlin. The aim of Eurocopter at the moment is to demonstrate the available technologies to potential customers of helicopters based on the X3 project, however, so far specific groups of customers have not yet been defined.

Eurocopter’s management has remained quite the characteristics demonstrated by the X3 helicopter during flight tests, especially the efficient operation of an electronic digital engine management system (FADEC).

At the same time, the European helicopter builder continues active work on other important projects. In particular, at the end of July it became known that a long-awaited contract was signed between Eurocopter and Turbomeca (Safran group) for the supply of TM800 gas turbine turboshaft engines for X4 new generation helicopters. According to Turbomeca, the latest technologies were used in the development of TM800 engines, including those that were confirmed by Tech 800 demo. TM800 engine certification is scheduled for 2017.

Continuing the strategy to update its lineup, Eurocopter recently announced the start of work on two new projects that received the code designations X6 and X9. Leading experts have long noted the need to upgrade the Super Puma helicopter family, which was introduced in 1981, and some models of this series continue to be produced to this day. New projects will be called up to fill a niche that could be formed after the termination of the production of Super Puma helicopters.

Work on these projects is designed for the long term, and so far precise details about the new programs have not been disclosed. All that is known is that the X9 helicopters will be produced at the Eurocopter plant in Donauworth together with the EC135 and EC145 models. Other details may become known later.

Ctrl Enter
Noticed oshЫbku Highlight text and press. Ctrl + Enter
We are
Bell introduced the project of the third generation convertoplan - V-280 Valor
52 comments
Information
Dear reader, to leave comments on the publication, you must to register.