American flag with blue stripe at Ramstein base in Germany drew condemnation in USA: reasons for backlash 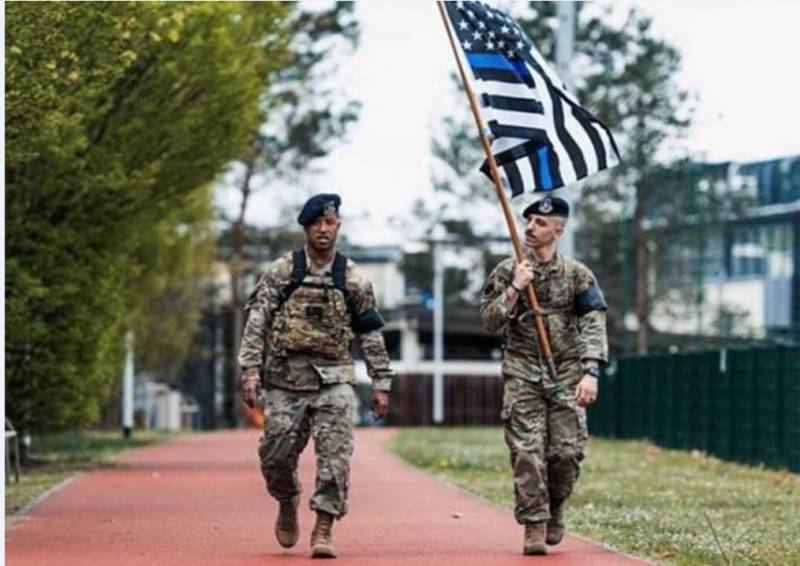 Ramstein airbase in the federal state of Rhineland-Palatinate in Germany has long been used by the American military aviation for your needs. Not so long ago, a black and white American flag with a blue stripe was posted on the territory of the base. The servicemen of the base themselves hung the banner, but soon they had to face harsh criticism from both the public and the command of the US Air Force. But what are the reasons for such criticism and negative reactions?


In the United States, National Police Week was being held, and the flag with a blue stripe was placed by pilots of the 86th Air Wing as a sign of support and solidarity with American law enforcement. But this is where the cause of social reaction is rooted. The fact is that the flag, known as the "Thin Blue Line", is used not only as a symbol of solidarity with the American police, but also as a symbol of the American right.

Interestingly, история this flag dates back to the Crimean War with Russia. Then the 93rd Mountain Infantry Regiment of the British Army near Balaklava was able to delay the attack of the Russian cavalry, lining up in a line, which was later called the "thin red line" in the press. Then, in 1911, the poet Nels Dickman Anderson used the phrase "thin blue line" to refer to the American army as referring to the color of the uniforms of American military personnel.

But it was not until the 1950s that Los Angeles Police Department chief William Parker used the phrase "thin blue line (stripe)" to describe the activities of the US police, which he called a barrier against the threat of anarchy and chaos. Then the flag with such a stripe began to be used by the American far-right.

Such a flag can often be seen at meetings and rallies of right-wing radicals. It was with this flag that some Americans were seen storming the US Capitol in January 2021. Previously, the flag appeared at a rally in Charlottesville, Virginia - in 2017. In this case, hanging it takes on a double meaning. 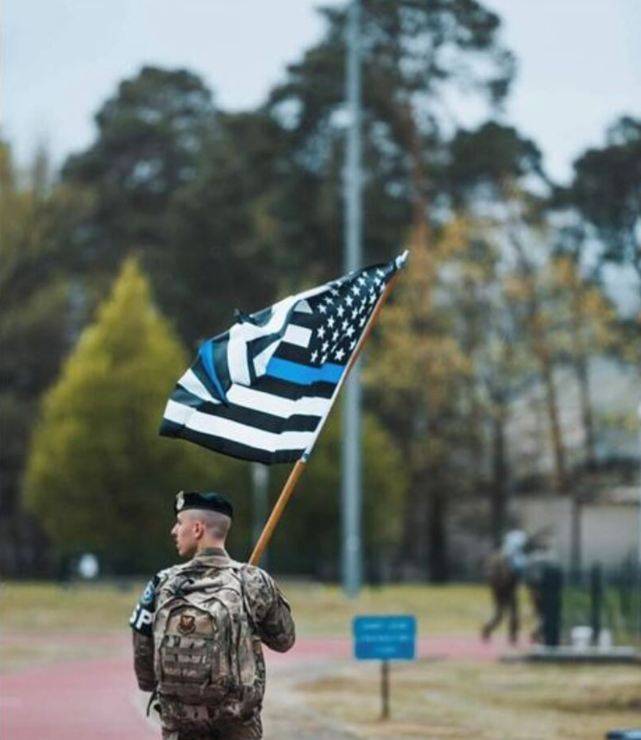 The photo of the pilot with the flag "ambiguous for the United States" immediately led to the appearance of harsh comments. The Americans considered the appearance of such a flag a challenge at a time when the country was "fighting racism and police violence."

I was very surprised to see that at the base, pilots in military uniforms carry such a pronounced political flag,
- wrote one of the commentators.

More radical netizens saw the appearance of the flag at the airbase as an open demonstration of protest against the American-backed police reform. Other commentators noted that the flag was displayed at the airbase only a few weeks after the Pentagon announced the launch of a campaign to combat manifestations of extremism and racism in the ranks of the US armed forces.

True, what kind of support for racism can we talk about if in a photograph of an American serviceman with a flag with a blue stripe, it is clear that another serviceman is walking next to the standard bearer - an African American, and for some reason this American military flag does not cause embarrassment. Moreover, the African American is clearly participating in the flag ceremony itself.

However, officials at Ramstein AFB stressed that the flag was only used to praise the pilots of the so-called air police for their hard work. The statement of the representatives of the base also noted that the flag violates the Pentagon's policy regarding the use of symbols on military installations, but the air base takes full responsibility for this.

We value the reaction and feedback from the community and want everyone to understand that we take these situations very seriously. We will continue to focus on what brings us together as members of the armed forces, while creating an environment in which everyone is treated with dignity and respect.
- emphasized the pilots of the 86th wing.

Meanwhile, it is worth remembering that the previous US Secretary of Defense Mark Esper issued a decree restricting the use of a number of flags at facilities and during events of the armed forces. The ban, in particular, included flags with the symbols of the Confederation, which were often used by the military.