Convoy battles in the Gulf of Riga 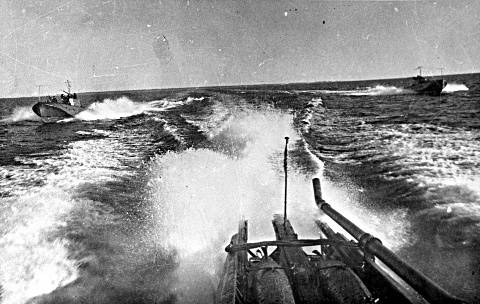 The German command decided to conduct the first caravan with supplies for the army group "North" through the Irbensky Strait to the Gulf of Riga on July 12, 1941. The timing of the caravan was well chosen - the Soviet naval aviation On July 11 and 12, she did not conduct reconnaissance of the Baltic Sea, because all the air forces were involved with the support of ground forces.

Thus, the German caravan calmly plowed the waters of the Baltic Sea, and the Soviet command did not know anything about it. However, on the morning of July 12, the Germans conducted reconnaissance of the Irbene Strait with three destroyers. Not finding worthy targets in the Irbene Strait, the ships kriegsmarine fired at the 315th coastal battery of 180-mm guns on the southern tip of the Sõrve Peninsula.

The battery under the command of Captain Alexander Stebel easily drove away the presumptuous Nazis, armed only with medium-caliber guns. Two volleys were enough for the Germans to retreat to a safe distance. But their appearance in the strait was a wake-up call for the Soviet command. Due to the lack of reconnaissance aircraft, a fighter was dispatched in the afternoon for reconnaissance. At 15:35 the situation became clear: the fighter discovered a large enemy convoy heading for the Irbensky Strait. The pilot reported 42 transports accompanied by 8 destroyers or torpedo boats, 3 patrol boats and a large number of boats.

Headquarters of the Baltic fleet immediately set about organizing countermeasures against the caravan.

However, time was running out, as the caravan was discovered late - at a distance of about 100 miles from Riga. Assuming that the caravan was moving at a speed of 8-10 knots, it could reach the port of destination in 10-12 hours. It was necessary to attack the caravan precisely in such a time period, but this task was beyond the realm of possibility.

Soviet torpedo boats based in the Moonsund Islands were not ready to go to sea immediately. This was also the case with most of the destroyers, which had just started refueling from tankers arriving from Tallinn. Thus, the difficulties with the basing of Soviet light forces in unadapted ports appeared at the most inopportune moment, when at all costs it was necessary to form the most powerful battle group to strike the enemy convoy. Despite the difficulties, no one was going to refuse such an opportunity.

First of all, the Soviet command sent a group of bombers to meet with the caravan. They sunk the ship Deutschland (Deutschland) and damaged several other units. When the ships were crossing the Irbensky Strait, coastal batteries from the Sõrve Peninsula opened fire on them.

The Germans continued to suffer losses, but stubbornly moved forward. At 20:00, already abeam Cape Kolka, just 60 miles from Riga, they were discovered by a submarine C-102... Nothing came of the torpedo attack, since the German convoy was walking along the coast, in shallow waters. Then 24 bombers from the island of Saaremaa were supposed to hit the caravan, but they did not succeed either: in the darkness of the night, the bombers did not find the enemy and, dropping bombs on land targets that were secondary in this situation, returned to the airfield.

At this time, 4 torpedo boats finally went out to sea under the command of Lieutenant Vladimir Gumanenko. For two hours they hunted the caravan, until by 4:00 in the morning they found it near Cape Mersrags, that is, already approx. 30 miles from Riga. Despite strong barrage fire, the boats managed to break through to the ships of the caravan and sink two of them with well-aimed torpedoes. The boats themselves did not suffer losses, although they returned to the base riddled with small-caliber shells.

Immediately after the torpedo attack, the bombers again took up action. This time, they had no difficulty finding the enemy. The bombers attacked in groups of 5-9 aircraft and returned to the airfield for a new supply of fuel and bombs. The Germans threw their fighters to defend the caravan. But the Balts did not stop attacking, until noon on July 13, when the last German ships entered the port. In total, a small number of aircraft made 75 sorties and the same number of attacks.

Finally, at about 13:00, the destroyers approached Riga "Angry" и "Guarding"... One of them even dared to enter the mouth of the Dvina and fire at the end ships of the caravan. This ended the first episode of the convoy battles in the Gulf of Riga. The Germans suffered heavy losses from bombs, torpedoes and artillery fire - three large transports and 25 small units.

It was an undeniable success. But the Soviet command was not enough for them, since with a better organization of intelligence, communications and interaction between the fleet and aviation, it was possible to try to destroy the caravan completely. 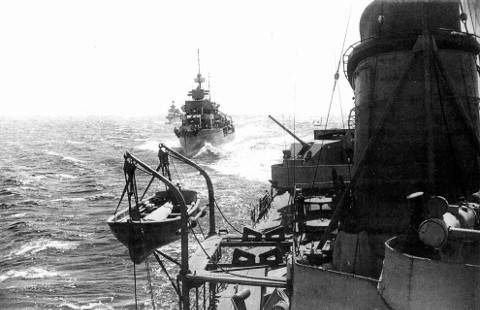 Destroyers of project 7U on the march.
Conclusions were made, mistakes were taken into account, shortcomings in the organization of hostilities were eliminated. And it was possible to meet the enemy fully armed. An opportunity arose soon enough.

On July 18, Soviet reconnaissance aircraft discovered a large convoy of 26 ships in the Gulf of Riga. It was decided to send bombers and a destroyer division to intercept the caravan, which was just busy laying mines in the Riga area. The bombers were the first to attack, which sunk 6 ships. Meanwhile, the destroyers finished laying mines and set off to intercept the convoy.

Destroyer discovered the first German ships "Guarding" under the command of Captain Third Rank Yevgeny Zbritsky. But before he could break through to the ships of the caravan, he had to fight six German torpedo boats. The battle was successful: two boats were damaged, and "Guarding" dodged torpedoes fired at him.

After an unsuccessful battle with a Soviet destroyer, the German boats turned in the direction of the caravan and covered it with a smoke screen. "Guarding" had difficulty finding targets for his weapons. Meanwhile, the caravan was inexorably approaching the mouth of the Dvina. But when the caravan entered the fairway leading to Riga, one of the mines just placed by Soviet ships exploded under the lead ship. The small vessel quickly sank, blocking the fairway. The rest stalled the course and huddled together, fearing to go through the minefield. This was what was needed "Guarding"... He approached the ships of the caravan at a minimum distance and began to shoot them with all available guns. Caught by surprise, the Germans tried to get out of the fire, but not all succeeded. For a short time "Guarding" sunk 5 transports and damaged several more. In total, the caravan lost 12 units with cargo for the army group "North". 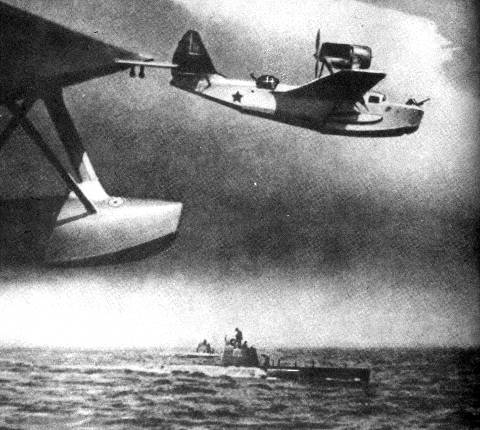 But the real pogrom of German shipping in the Gulf of Riga came on July 26.

Compared to the first episode, when a lot of things went very badly, and the second, when the successful outcome was determined by a happy coincidence, the third was an exemplary beating of the enemy forces - as a result of a concert played out like clockwork by all types of troops, including intelligence and communications.

This time, reconnaissance aircraft found the caravan at the distant approaches to the Irbensky Strait. It was very unusual: only two ships accompanied by 18 ships. It was not hard to guess that he was transporting some particularly valuable cargo, since he was given such a strong escort. On the other hand, the decrease in the number of transport ships and the increase in the number of cover ships meant that the Germans also drew conclusions from the sad experience for them of the previous two episodes of convoy battles in the Gulf of Riga. It was obvious that the Germans were determined to lead the caravan at all costs with minimal losses.

The main blow to the caravan was to be inflicted by bombers and torpedo boats of the Baltic Fleet. In the Irbensky Strait, coastal batteries were supposed to fire at him, and on the waters of the Gulf of Riga he was to be met by Soviet destroyers. To enable the strike forces to immediately turn around in positions convenient for attack, the convoy was constantly monitored from reconnaissance aircraft. In addition, one destroyer was sent to the area of ​​Cape Kolka, whose task was to lie in wait for the caravan, and then follow it to the mouth of the Dvina, directing strike forces.

At 13:23, when the caravan approached the Irbensky Strait, a detachment of torpedo boats under the command of Lieutenant Commander Sergei Osipov left the Myntu pier on the Sõrve Peninsula. It was covered by fighters from the air. Knowing the exact location of the caravan, the boats easily overtook it at the southern shores of the strait, in the area between Mikeltornis and the Ovisi lighthouse.

Fearing mines and coastal artillery, the caravan went a short distance from the coast. When approaching the enemy, Lieutenant-Commander Osipov identified 2 destroyers, 8 patrol boats and torpedo boats among the escort ships. While Osipov was feeling for the weak point of the caravan, convenient for an attack, bombers flew into place and attacked the transports. One of them turned out to be a tanker filled with fuel. From the explosion of one bomb, he instantly turned into a flaming torch.

Everything was confused in the caravan. Osipov was just waiting for this. Three boats attacked the caravan at maximum speed, aiming at the second transport. German ships, busy repelling an air attack, only at the last moment saw the approaching torpedo boats. It was too late to transfer fire to them. In addition, the boats disappeared in the clouds of smoke from the flaming tanker and, under their cover, were rapidly approaching the second transport. Then they set up their own smokescreen. And at 14:48 torpedoes were launched. The torpedoed transport went to the bottom. And the boats retreated without loss.

The German caravan did not reach its destination. Both vehicles were destroyed. And two destroyers and one patrol boat were damaged. In addition, in the Ventspils area, Soviet planes overtook and sank a minesweeper boat R-169.

All clashes on the waters of the Gulf of Riga in July-August 1941 resulted in greater or lesser successes of the Soviet naval forces. Although the Germans occupied most of the coastline of the gulf, the Baltic Fleet still retained control of the sea and did not allow the supply of the army group "North" by sea.

In tactical terms, these clashes contributed to the improvement of the interaction of various naval, air and ground forces and services, which for a long time became the canon of Soviet naval art.