In Latvia, wished to demolish the monument to Soviet soldiers 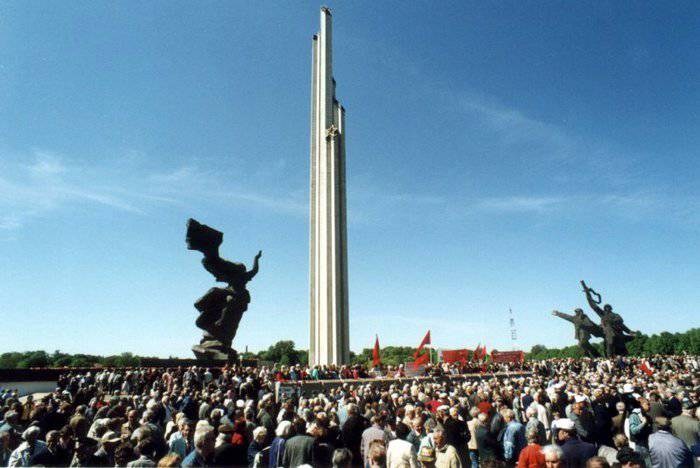 Latvian Defense Minister Artis Pabriks said that, in his opinion, the Victory Monument in Riga, erected in honor of Soviet soldiers after World War II, must be torn down. In addition, the politician said that he was hurt by the way Russians are celebrating May 9 in Riga.

"The so-called Victory Monument in Riga is a symbol that is not connected with graves, but has gained a great deal of political weight. Despite the fact that, from a moral point of view, the monument must be demolished, such an act would have too many dangerous consequences," the minister said .

Pabriks also spoke on the celebration of Victory Day. "The purpose of the majority of participants in this event is not to commemorate the victims of World War II, but to keep us in the geopolitical sphere that 20 ceased to exist years ago ... Well, remember your own people - this cannot be forbidden, but not you need to oppose them to the state in which you live.When Russian 9 youth May drives about cars with the inscriptions “To Berlin!”, what should the representative of the younger generation of Germans think? What should Germany think - Russia's strategic partner? " - the minister asked questions.

According to him, he would also be glad if the initiative of President Andris Berzins to reconcile the soldiers who fought on different sides of the front was a success. “But we cannot reduce this reconciliation only to the notion of“ legionaries against the Red Army men. ”It concerns integration, ethnic, language policy, and international relations. I think there are politicians, including Russia, who do not want such reconciliation see. If we want reconciliation, then we need to fold weapon and leave fallen soldiers alone, "Apollo.lv quotes the Latvian Minister of Defense.

Meanwhile, the mayor of Riga, Nil Ushakov, responded to the statement by Pabriks, comparing the Minister of Defense with Sharikov. "The stupidity of the universal scale," - said the professor Preobrazhensky about individual statements about the life of Comrade Sharikov. In Latvia, the Sharikovs are not strangling cats, but are headed by the ministries of defense, ”the Ushakova portal quotes the Russian community in Estonia.

Note that at a time when some politicians are against celebrating the victory over Nazi Germany in Latvia, every year on March 16, the country celebrates the Day of Remembrance of Legionnaires - fighters of the Latvian Volunteer Legion, which was part of the SS forces. On March 16, 1944, the Latvian 15 and 19 divisions in the SS participated in combat operations against the advancing Soviet forces near Leningrad. However, in the fall, the Red Army liberated the entire Baltic region from the Nazi occupation, Izvestia writes.