The situation in Chad: is there a Russian trace in it? 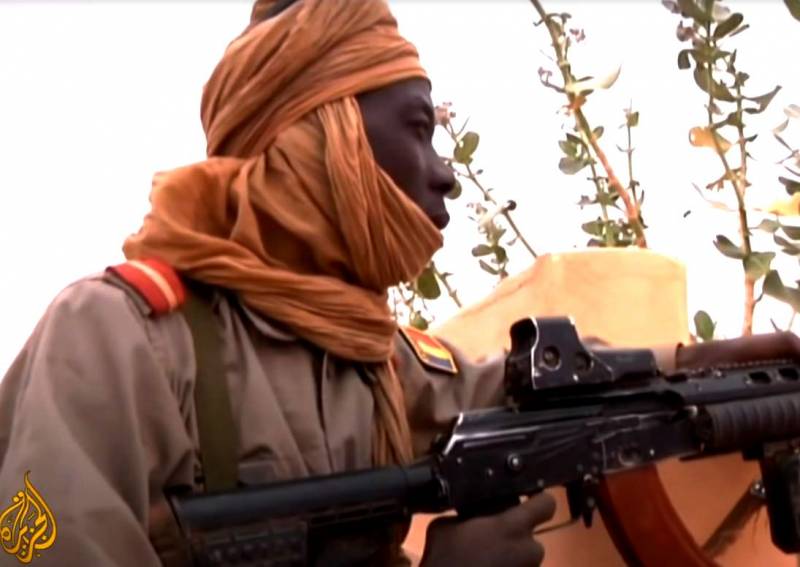 In the spring of 2021, Chad became the focus of world media attention after the death of the country's President, Marshal Idris Debi Itno. A former military professional, Idris Deby led Chad for thirty years, from 1990 to 2021. One of the oldest African politicians in power, Deby took the helm of the country in a completely different coordinate system and skillfully steered for three decades.

Marshal died on the front lines

The president was 68 years old, but this did not prevent him, as a real military leader, from dying on the battlefield: Idris Debi went to lead the operation of his troops against the rebels in the north of the country, where he was mortally wounded.

For Chad, the presence of a military leader on the front lines is commonplace. People say troops don't fight unless big commanders sit in the first car on the front line,
- says French Chad specialist Jerome Tubian.

Rebels based in neighboring Libya invaded Chad after the April 11 presidential elections, in which Idris Deby was elected to another six-year term. Naturally, opponents of the "eternal" president accused him of undemocratic rule. But the marshal himself led his troops into battle and turned out to be far from eternal. 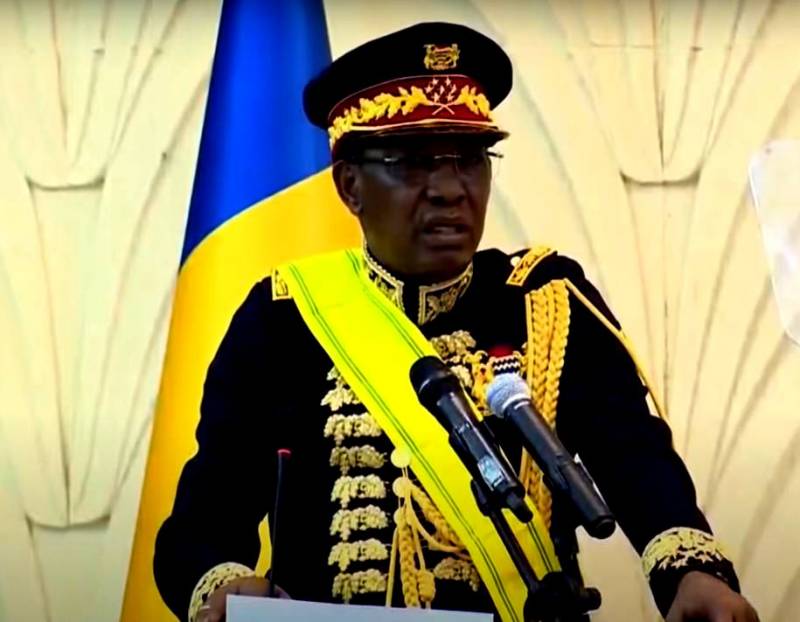 Idris Deby attending the title of Marshal of Chad, 2020
The death of Deby, who ruled Chad for more than thirty years, has added even more uncertainty to the life of this not particularly stable African republic. For a long time, the civil war has not stopped in Chad, which the rebels from the Front for Change and Accord in Chad are waging against the government of the country.

The West sees what is happening as a consequence, including Russian interference in African affairs. For example, the Western press writes that the leader of the front, Mohammed Mahdi Ali, enjoys the support of the commander-in-chief of the Libyan National Army, Field Marshal Khalifa Haftar. The Times, for example, published an article claiming that Russia, through the Wagner Group, hired fighters from the Front for Change and Accord in Chad, with whom the Russians had already interacted during the fighting in Libya. However, of course, there is no real confirmation of such statements.

The main reasons for Russia's interest in Chad

The return of Russia to Chad, as well as to other African countries, looks quite natural. First, the Soviet Union once played a huge role in the life of almost most countries on the continent. The orbit of Soviet influence included many African states, but, in addition, Moscow also patronized rebel groups in those countries where pro-Western governments were in power.

The second factor contributing to Russia's return to Africa is France's loss of real influence over its former colonies. In recent years, Paris has more and more clearly demonstrated either its inability or unwillingness to control the situation in the African republics, which were once part of the huge French colonial empire. The civil war has been going on for years in Mali, where the French contingent is still present, and the Central African Republic has long come under Russian influence. Chad is another former French colony, where not everything is calm either.

The third factor is economic interests. The appetites of Russian companies are growing, and the African continent is a very fertile ground for business development in a number of areas, primarily in the extraction of natural resources. In East Africa, Russia has a strong competitor in the person of China, so Moscow has recently become more interested in the Central African direction.

But back to Idris Debi. In power for thirty years, he nevertheless received little criticism from the West. Even French President Emmanuel Macron attended Deby's funeral in the Chadian capital N'Djamena. The explanation for such attention to the deceased Chadian marshal is simple: Deby was a typical pro-Western politician of the old colonial school. He received a military education in France and then regularly served the former metropolis, defending its interests, both in his native Chad and abroad.

To Deby's credit, it should be said that he formed a fairly combat-ready army by African standards, and this, given the general economic backwardness of Chad, is very surprising. But the fact remains: Chadian troops were used to curb the expansion of Libya under Muammar Gaddafi, fought on the side of the French in Mali, were part of most of the combined contingents in Nigeria, CAR, Sudan, and so on. That is, Deby was beneficial to the West, but his death put French influence in the country into question.

However, can it be precisely Russian influence that can be viewed as a factor destabilizing the situation in Chad? The statements of the Western media about Haftar's support for the rebels of Chad are not entirely correct. Although their headquarters are located in the Libyan province of Fezzan, the Front for Change and Reconciliation in Chad previously had big problems with the Libyan National Army: aviation The LNA even bombed rebel positions. Then, nevertheless, it was possible to come to an agreement.

Another rebel group is the Military Command Council for the Rescue of the Republic, led by Rashid Mahamat Tahir. This group is actively supported by Qatar and Turkey, as well as the Libyan presidential council. Islam plays an important role in the ideology of the Council of Military Command for the Salvation of the Republic, which gave the Western media a reason to present Chad in the era of Idris Deby as the last outpost on the way to the penetration of Islamism into tropical Africa. 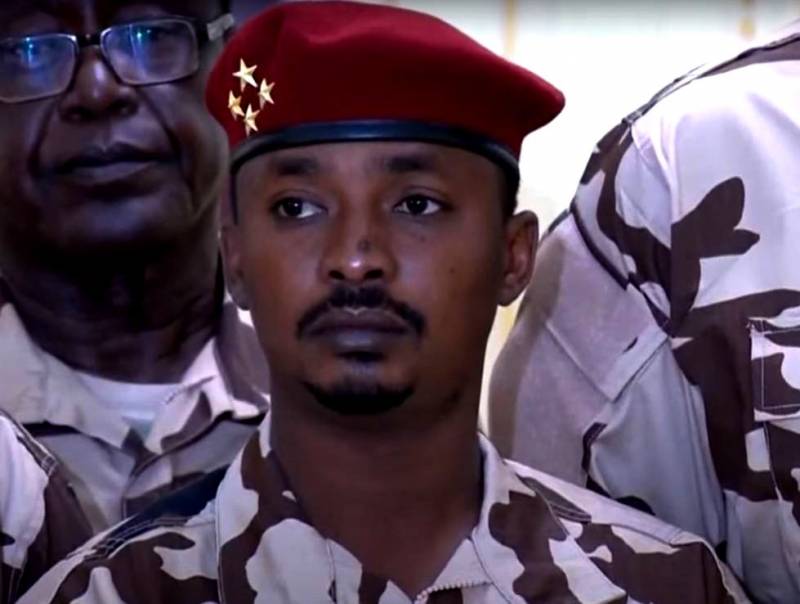 Mahamet Deby Itno, interim President of Chad
The growth of Turkish-Qatari influence in Central Africa is clearly not part of Russia's plans. Moreover, in Libya, Russia supports the forces fighting against Turkey's allies, and in the CAR it supports the government, which is also fighting against Islamist rebel groups. It would seem, why, in that case, would it be necessary to destroy Idris Debi? Unless only for the purpose of reformatting the military-political situation in Chad.

What is in store for Chad in the near future and what position will Russia take?

Now the interim president of the country has been proclaimed the son of Idris Debi, 37-year-old General Mahamat ibn Idris Debi Itno, who commanded the presidential guard. A professional military man, Mahamat, like his father, received his military education in France and then served in various positions in the Security Service of government agencies and in the armed forces of Chad.

However, Mahamat is unlikely to have the abilities and, moreover, the authority of his father, and it is still unclear whether he will be able to retain power in a difficult political situation, when columns of rebels are moving to N'Djamena from the north of the country. To protect the power, Mahamet Debi decided to transfer 1200 Chadian soldiers and officers serving in the problem region at the junction of the borders of Niger and Mali to Chad. The Chadian contingent there played a key role in containing the Islamists, and as soon as the military from Chad left home, the militants immediately intensified in the Tillaberi region.

A professor at the University of Niamey (Niger), a former military man Amadou Vounty Diallow, believes that the withdrawal of Chadian troops could lead to a collapse in Niger and Burkina Faso, where the presence of the Chadian military was a deterrent for radical groups. So far, there is no alternative to the Chadian contingent, and the French are unlikely to want to get involved in hostilities in another problem area, besides Mali.

But the Chadian army, despite its combat effectiveness, cannot be compared with the armies of European states. As in any other African country, tribalism is very strong in Chad. The army is no exception: it also has clans represented by different tribal groups, and if Idris Debi managed to maintain relatively harmonious relations between the tribes, then it is not a fact that his young son will succeed. It is possible that events in Chad will develop along the same path that they developed in neighboring Libya after the overthrow of Muammar Gaddafi. In this situation, each of the opposing groups will receive influential patrons in the West or the Middle East. And there is no doubt that Russia, which also has its own interests in Central Africa, will support either side.

France has already declared its support for the military council under the leadership of Mahamet ibn Idris Debi, which could not be doubted: after drawing conclusions after the overthrow of Gaddafi, Paris is no longer in a hurry to support African "democrats".

It is not yet clear which side Russia can take. It is possible that at the official level Moscow will also express support for Makhamet Deby, but in reality it will give preference to one of the groups competing with him.

Ctrl Enter
Noticed oshЫbku Highlight text and press. Ctrl + Enter
We are
A great interview with Sergey Lavrov: about Ukraine, Obama and IranWhat you didn't want to know about England
Military Reviewin Yandex News
Military Reviewin Google News
25 comments
Information
Dear reader, to leave comments on the publication, you must sign in.