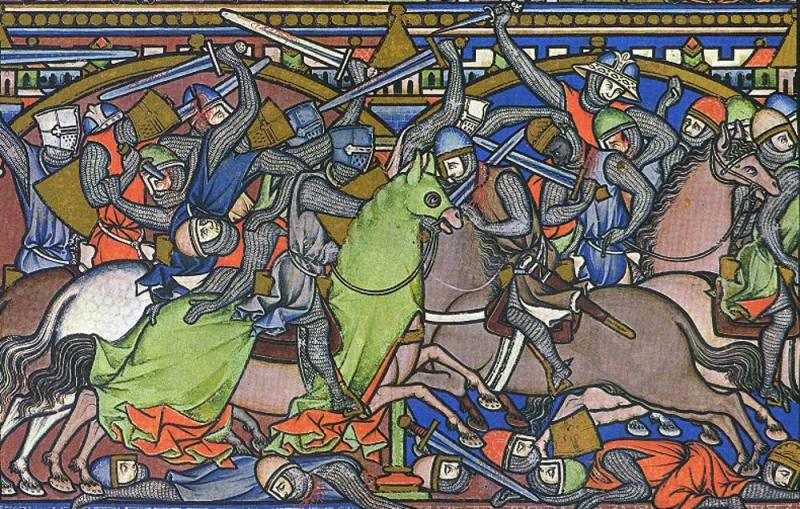 "... took his sword and took it out of its scabbard"
(First Kings, 17:51)
History weapons. Last time we finished examining medieval swords on swords "type XII", noting that they begin to change the shape of the blade: the valleys become short, and the blade narrower. But it's still a slashing sword.

But then the first overhead plates appeared, attached to chain mail, and the soldiers immediately faced a problem, but how to hit such "shells"?

This happened already at the beginning of the XIV century. And, although outwardly, under the surcoat, the metal plates were not visible, everyone knew that they could well be there. This means that such a shell cannot be taken with a sufficiently flexible sword with a rounded blade. Useless!

French sword of the early 124,9th century. Material: steel, silver, gold, enamel, wood, leather. Dimensions: length 103,8 cm; blade length 22,9 cm, crosshair width 1644,3 cm; weight XNUMX g. Metropolitan Museum of Art, New York
This is how swords of a fundamentally new type appeared: with a rhombic cross-section blade in the form of an elongated triangle, with a pronounced point. It is clear that this process did not begin immediately, but was gradual. And he touched, first of all, not the blade, but ... the handle. It has become longer and easier to use. 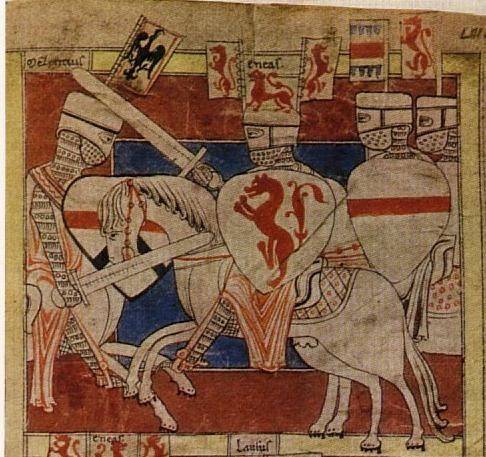 Let's look at this image of two Germanic knights fighting. Well, the fact that they have funny flags on their helmets is one thing. We are interested in the one for whom one checkbox was not enough, and he put two of them. Moreover, he decorated the helmet with a coat of arms. See how he holds his sword by extending the brush. The sword itself is "Type XII," no doubt about it. But its handle is clearly longer. And it is obvious that it was these swords that subsequently developed into the "Type XIIa" and "Type XIIIa" blades. The Aeneid, 1210-1220 Thuringia, Germany. State Library, Berlin 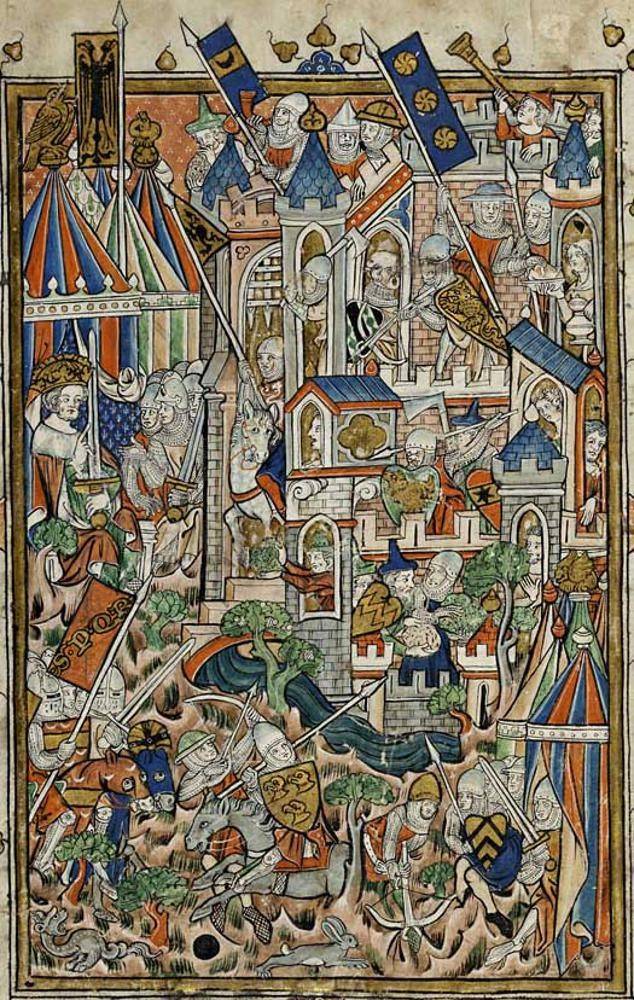 Before us is a beautiful multi-figured illustration from the manuscript "The Bible of Rhymes" 1332, the Netherlands. There are a lot of all kinds of weapons and armor here. But we are interested in two swords from the king on the left and the warrior in front of him. The swords they hold in their hands have long handles. That is, these are "type XIIa" swords. However, the year of the creation of the manuscript is 1332. That is, as already noted, the same swords were used at different times. Meermano Museum in The Hague
And now let's turn to the already familiar "Bible of Matsievsky". In the past material, purely chopping blades were shown there. But let's turn a few pages.

And we will see another miniature, which shows completely different swords - thrust-chopping, transitional, belonging to the "type XIV", as well as one sword "type XV" with a very strong narrowing to the point. That is, for some time there were parallel cutting swords, cutting-cutting and thrusting swords.

It is interesting that, although the fight is equestrian, however, it is depicted so close that a knight in a white helmet, for example, grasps the chain mail hood of a Negro knight with his hand and cuts his neck with his sword. And the rider in the hat-helmet completely captures the enemy by the neck, and inflicts a fatal blow on him under the helmet with a dagger. And yet, judging by the picture, not even one. Such is their fierce fight going on there. But drawing is drawing, but when exactly the "type XV" swords appeared, it is rather difficult to say for sure. 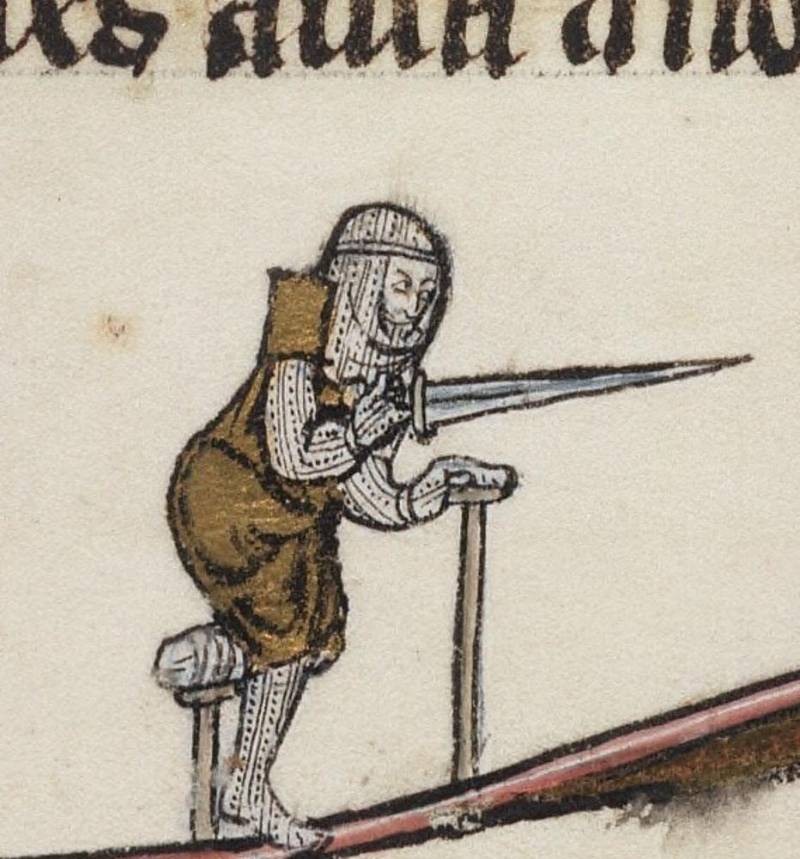 Miniature from "Romances about Arthur". A legless knight with a stick and a purely thrusting sword "type XV" is depicted. Manuscript 1275-1300 France. Yale University Library 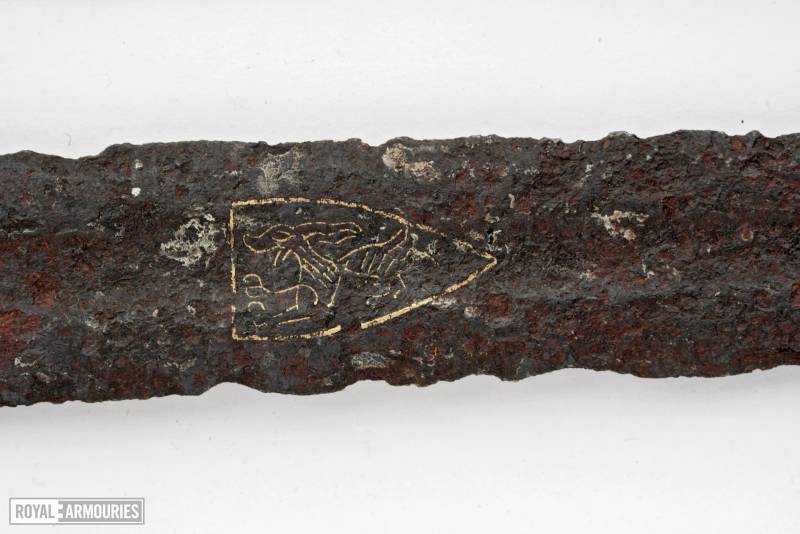 Sword 1271-1299 In this form, the oldest swords are most often found. Especially if they are found in the ground or at the bottom of the river. Nevertheless, it can be seen that he has a uniformly tapering double-edged blade, with a rounded end, with a wide fuller extending almost the entire length. On one side of the blade, two shields are inlaid with brass, each of which depicts a running lion. On the other, there is a cross in a circle and another lion on a shield. Overall length: 900 mm, blade length: 720 mm. Weight: 1090 g. Royal Arsenal, Leeds 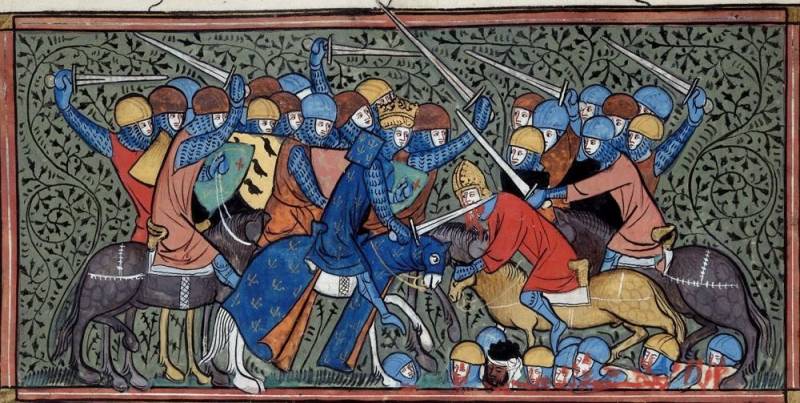 This miniature from the Chronicle of St. Denis "already all the knights fight with swords" type XV ", but at the same time they inflict not stabbing, but chopping blows with them! "Chronicles of St. Denis ", 1332-1350. Paris, France. British Library, London
However, since this chronicle was created for more than one year, then, most likely, we have images on the miniature of a somewhat later time, namely the very middle of the XIV century. Sword "type XV", as a rule, had a length of about 90 cm, with a blade length of 80 cm. Weight - one kilogram. The blade has a diamond shape.

Swords "Type XVII" were distinguished by their large size and weight. In the Oakeshott collection there was a sword weighing two kilograms. But a 2,5 kg sword is also known. The "master of swords" himself called them "boring", because there was nothing interesting about them - a typical sword "one and a half hands" of great length and weight. 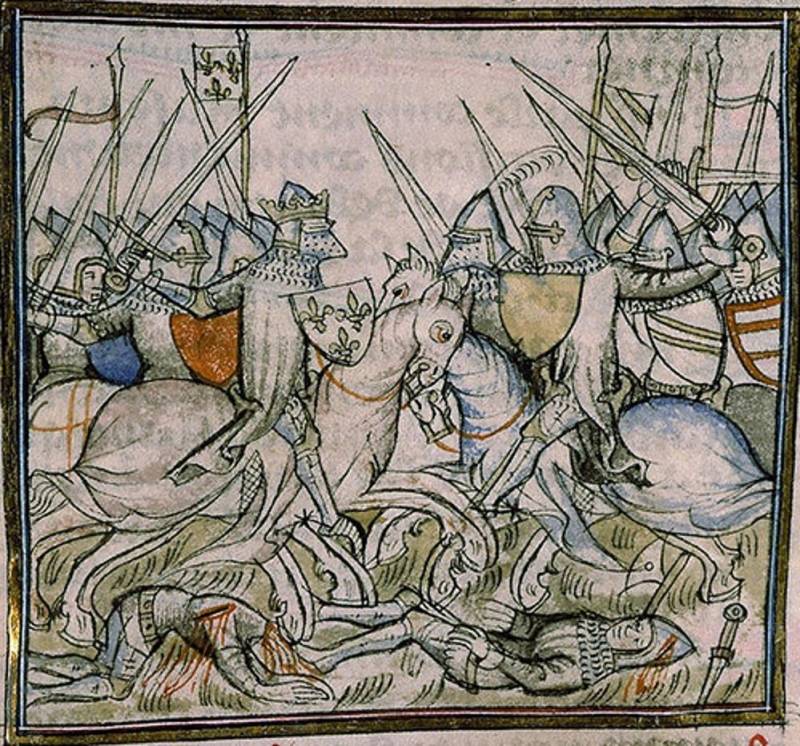 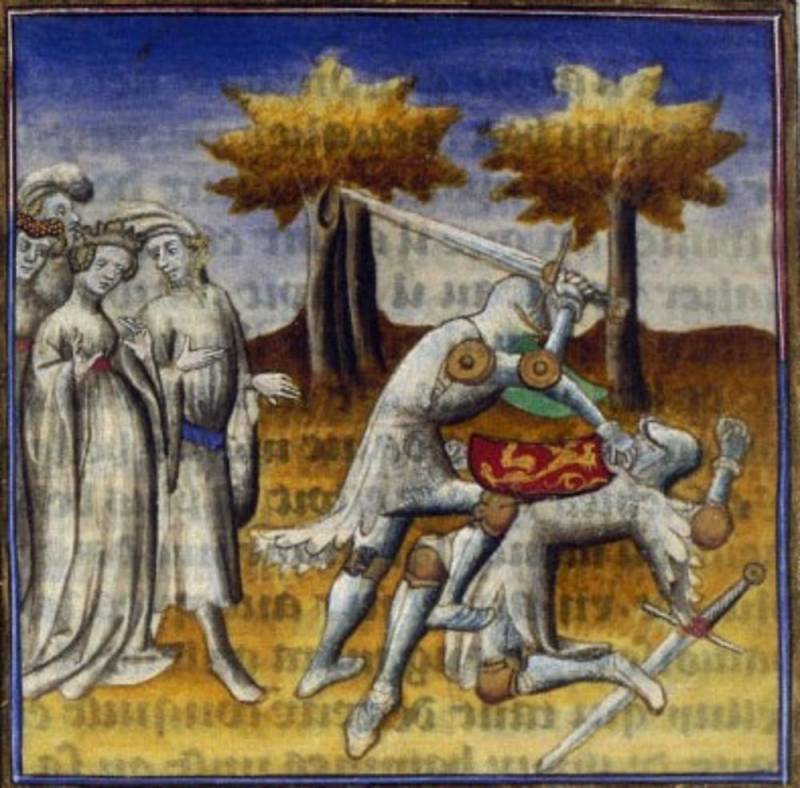 In this miniature we see swords "type XX" - again with handles in "one and a half hands" and a blade smoothly tapering to the point with several lobes. There are usually three of them, with the third being the longest, located between the two shorter ones. In fact, these are the last "swords of the Middle Ages", because then the Renaissance has already begun. Tristan Leonski, 1400-1425 Paris, France. National Library of France.
An interesting feature, most likely adopted by Europeans in the East, was the characteristic holding of the sword with the index finger placed on the crosshair of the sword. For example, in the oriental instructions on fencing, the Arabian horsemen were asked to first strike with the sword at the enemy's sword in order to ... chop off his index finger at the crosshair. And only then, when he dropped the sword in pain, deprive him of his head with one blow. 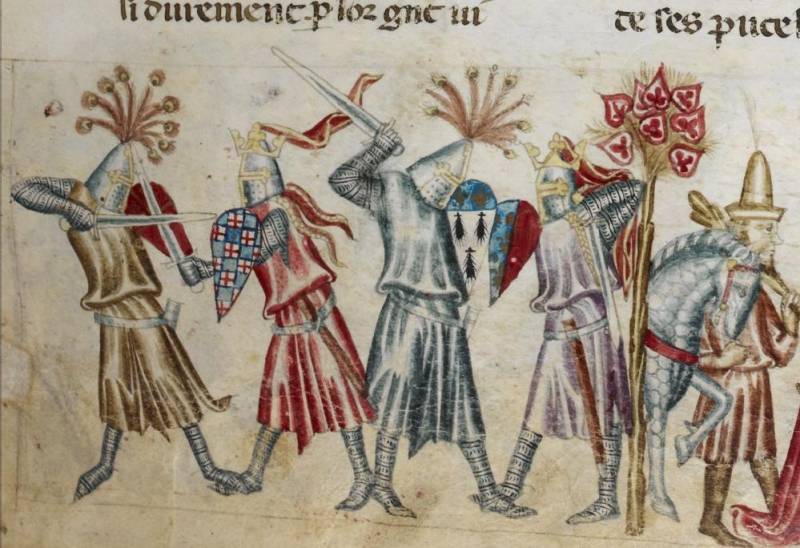 Finger on the crosshair. The Ancient History of Julius Caesar, 1325-1350 Naples, Italy. British Library, London
It is interesting that the Arabs for a long time cut with swords, not stabbed. Thus, the Arab knight and commander of the XNUMXth century Osama ibn Munkyz wrote in his Book of Edifications:

“I grappled with the assassin ... He held the dagger to his forearm, and I struck him so that he cut both the blade and the forearm, causing a small notch on the blade of my sword. The blacksmith in my city said he could remove it, but I told him to leave it as it is, as this is the best mark for my sword. And this mark has been preserved to this day. " 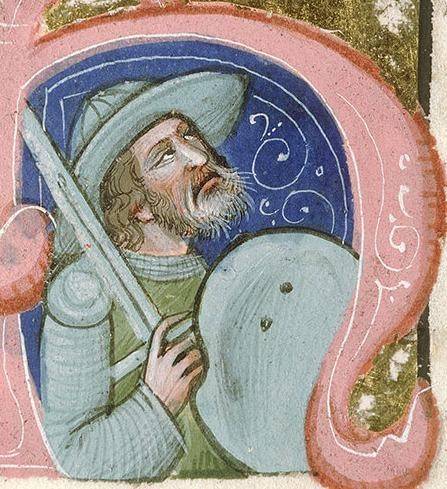 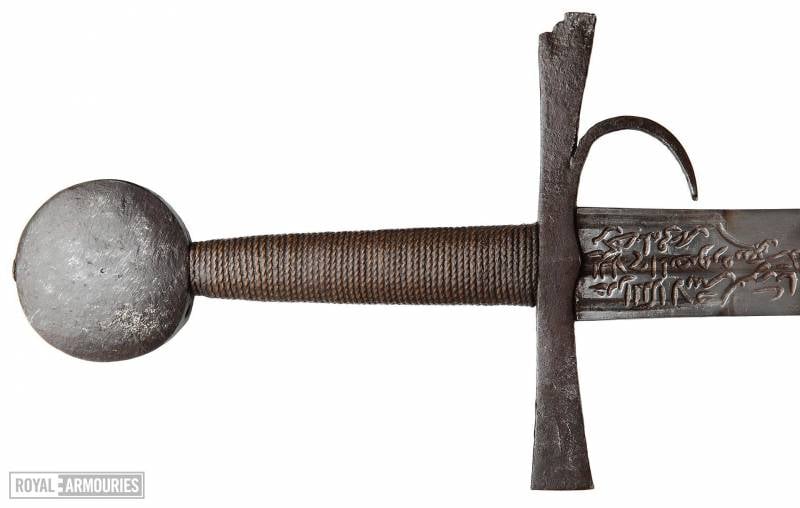 Sword with a ring "type XIX" 1365-1432 Royal Arsenal, Leeds
The earliest evidence of a crosshair finger ring dates back to 1340–1350. There is a diptych "Baptism and Mourning" by the masters from Siena, which depicts, however, not a sword, but a falchion, but ... all the same with a ring. And since the rings were on the falchions, then they were on the swords.

Interestingly, there are very early images of purely thrusting swords. So it is probably worth emphasizing once again that different types of medieval swords could well coexist "peacefully" in parallel, and not just replace each other sequentially.